Artemisia Gentileschi.
Triumph in the face of Adversity.

Born in Rome in July 1593 Artemisia Gentileschi is the most important female painter of the late renaissance and early baroque eras, some say that she is the greatest female painter ever. Her triumph against adversity, overcoming sexual assault and torture in a predominately male orientated world makes her story all the more compelling. 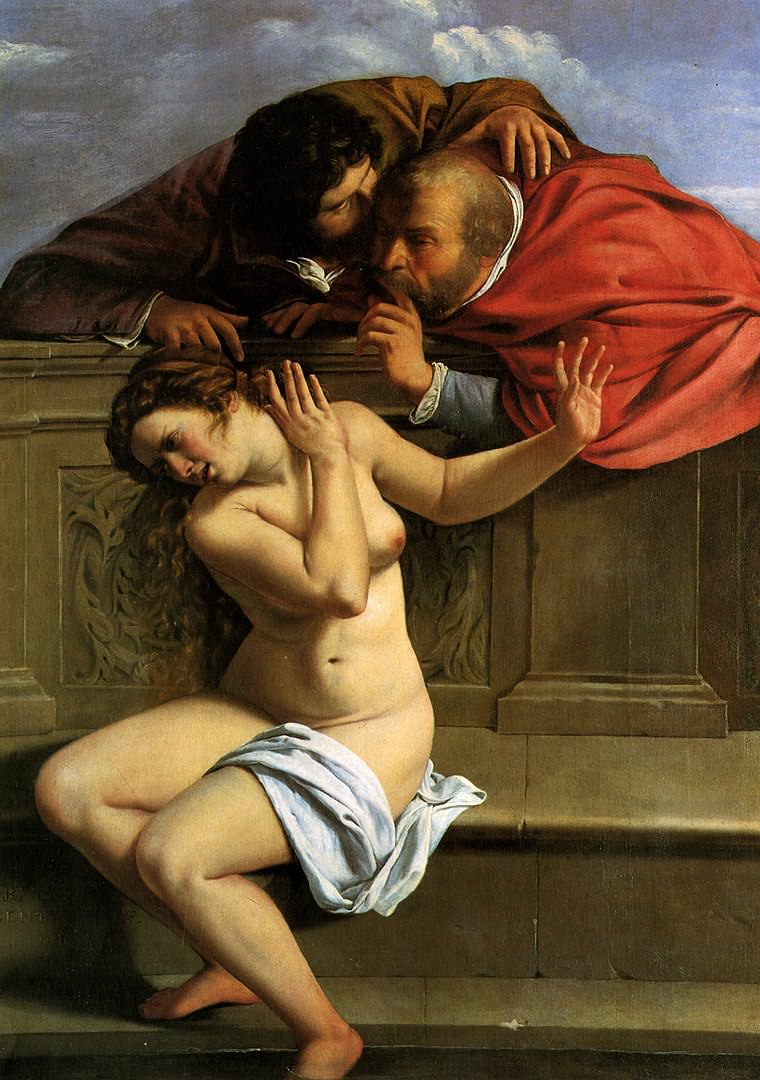 Her mother died when she was twelve, her father Orazio Gentileschi was also a painter both he and his gifted daughter were influenced by the works of Caravaggio sharing his unflinching fondness for realism and dramatic lighting effects. Orazio recognised his daughter's blossoming talent and by the age of fifteen, she was capable of producing skilfully executed paintings.

However, in the sixteenth and seventeenth centuries, female painters were very rare and Artemisia was confined to working in the upstairs room of her home. Male artists were able to roam the streets looking for interesting subjects to paint but conventions of the time did not allow this freedom for women and so Artemisia had only her father’s work for inspiration.

Her earliest known work is Susanna and the Elders the biblical story of the beautiful Susanna bathing in her garden who is harassed by two old men who threaten to accuse her of adultery if she does not submit to their desires.

In biblical times adultery was punishable by death and Artemisia has captured the menacing scene perfectly.

A collaborator of Orazio, Agostino Tassi, visited Orazio’s workshop. Employed to teach Artemisia perspective, when they were alone he raped her. At the time an unmarried woman who was not a virgin was deemed unacceptable, this left the seventeen-year-old Artemisia with few options. She began a sexual relationship with Tassi hoping that an offer of marriage would follow therefore keeping her reputation intact. 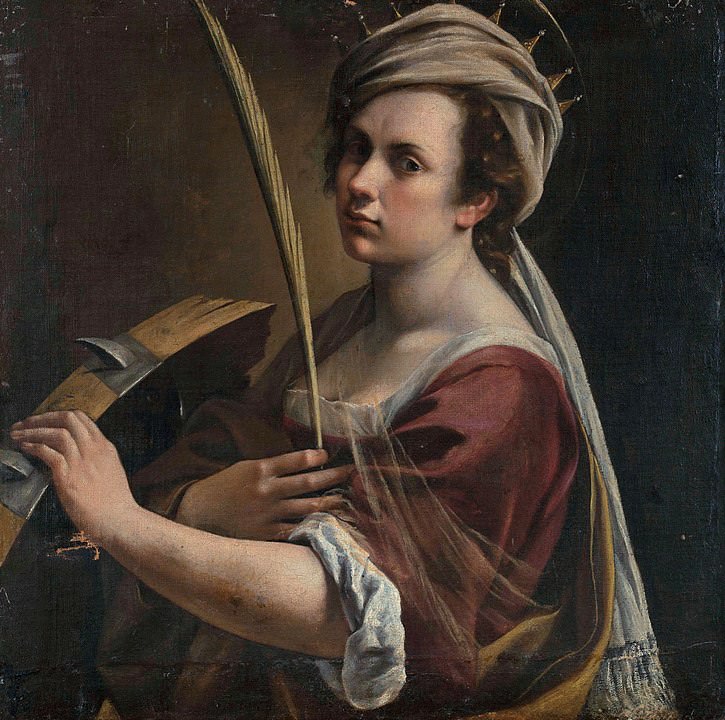 When Tassi refused to marry Artemisia her father Orazio reported the crime to the authorities. What followed was a damming insight into of the dreadful treatment of women at the time.

The trial lasted seven months during which Artemisia was subjected to a public gynaecological examination to prove that she was no longer a virgin. A crime was only deemed to have been committed if Tassi had taken her virginity, had she not been a virgin at the time of the assault no criminal proceedings would have followed.

To verify her evidence the unfortunate Artemisia was tortured by the application of thumbscrews eventually she screamed out “it is true it is true” and her story was believed. Tassi’s punishment was to be exiled from Rome, a punishment that was never enforced.

The trial was well documented and it seems that Gentileschi was forced to give a graphic account of the rape, the ordeal made her something of a celebrity in Rome.

After the scandal of the trial, Orazio moved quickly to find a suitable husband for Artemisia. Barely a month after the trial she married Pierantonio Stiattesi. In 1612 the couple moved to Florence. Artemisia enjoyed artistic success in Florence becoming a court painter to the powerful Cosimo II de’ Medici, Grand Duke of Tuscany she was also accepted into the Academy of the Arts and Drawing.

After the confinement of her father’s house, she was now exposed to a wider range of artistic influences. During the eight years that she spent in Florence, she gave birth to five children sadly only one daughter Prudentia survived until adulthood. During this Florentine period, Artemisia completed one of her most famous and accomplished works, Judith Slaying Holofernes.

She also began an affair with a wealthy Florentine nobleman Francesco Maria Maringhi. It would seem that her husband knew about the affair but tolerated it because of Maringhi’s financial assistance to the couple who had amassed a certain amount of debt. By 1620 the couple had relocated to Rome. 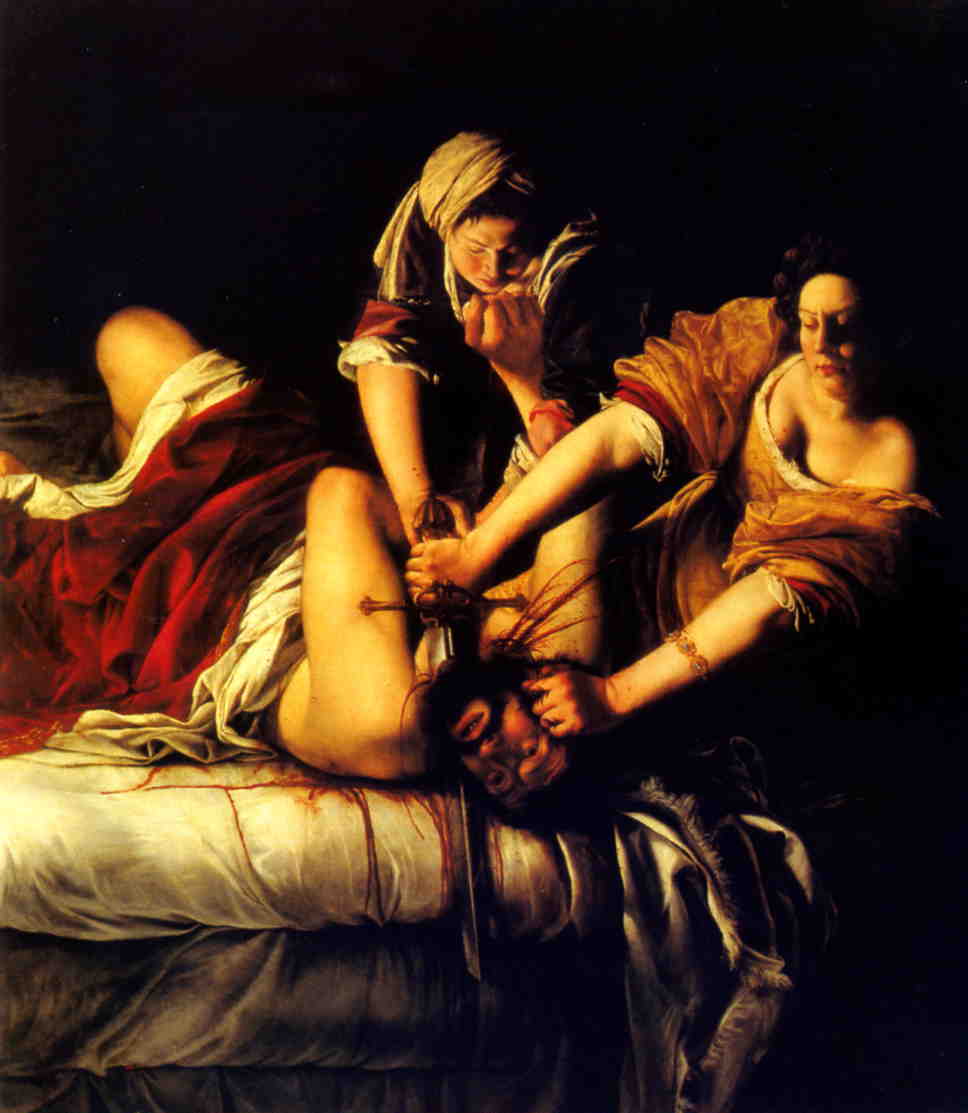 Gentileschi's period in Rome was very successful, she was able to meet and collaborate with other artists. Her unusual status as a female artist coupled with her incredible artistic talent attracted many of the important patrons that resided in the city. As a member of the Academy, Artemisia was now able to buy paints and equipment without the authority of her husband and by 1623 he does not feature in any surviving documents.

By 1627 Artemisia had moved to Venice where she was to remain for three years. After spending time in Naples, where her work was already known and on the invitation of Charles I of England she joined her father Orazio in London.

It was here that she painted her famous, Self-Portrait as the Allegory of Painting. Orazio who had been given a commission to decorate the ceiling of the house of Queen Henrietta Maria in Greenwich, titled An Allegory of Peace and the Arts, died in London in 1639. By 1642 Artemisia had left London, she settled in Naples where she set up her studio. The date of her death is not known or documented but 1654 or later is a possibility.

Because of the notoriety surrounding the rape and subsequent trial of Artemisia Gentileschi it has been too easy to forget about her wonderful talent as an artist. Had Artemisia been a man she would have been regarded as one of the greatest masters of her age.

Until recently the few successful renaissance women painters have been largely overlooked or merely given the briefest of mentions thankfully this has now changed. Even so, Artemisia’s battle to succeed despite the traumas that she endured marks her as a truly outstanding historical figure. It is pleasing to see her receiving the praise that she deserves despite her battles with the conventions of her time.

Above all her exceptional paintings have left us with a body of work which is now enjoyed worldwide, I have the deepest admiration for this brave, heroic woman. 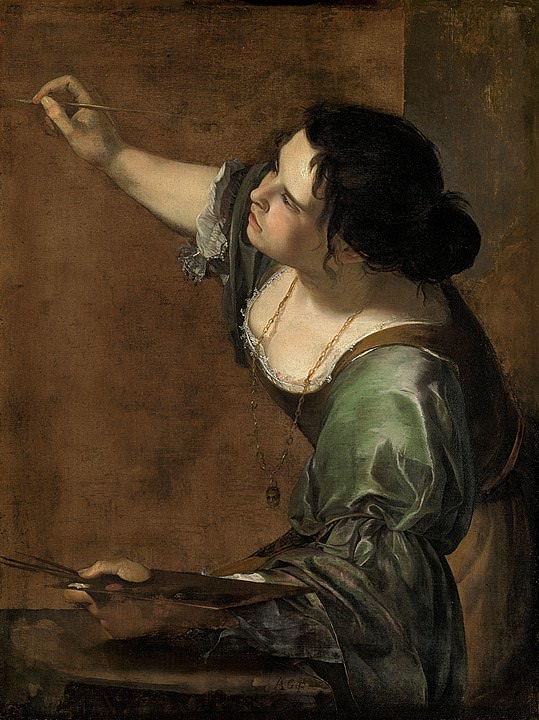 Self-Portrait as the Allegory of Painting, 1638/9, Royal Collection, London.(w)
FacebookTwitterPinterestTumblrRedditWhatsApp