Italian Renaissance History.
The Beginning of a New Age.

The Renaissance marked a great cultural change throughout the whole of Europe and is viewed as a bridge between the medieval and modern ages. Scholars schooled in literature along with poets, courtiers and schoolmasters, all with a powerful thirst for learning, became known as the intellectual movement humanism.

The humanists rediscovered Greek and Latin texts and began to teach Latin literature. The poet, historian and philosopher, Francesco Petrarch (1304-1374) was one of the leading lights of the movement.

It was this explosion of free thinking that eventually spread to the artists and architects of the fifteenth century. The independent cities of central and northern Italy with their politically and economically successful institutions such as banking, workshops and universities provided ideal conditions for the emergence of Humanism.

Beginning in Italy the new thinking eventually spread to the rest of Europe.

The fourteenth century, or Trecento, artists shed the mosaics associated with the Byzantine period and took inspiration from classical Greek and Roman sculptors.

We tend to assume that every age must be greater than the one that it preceded, but this is not always the case. The Roman Empire was the centre of world civilisation until its demise in 476. Europe had entered the Middle Ages or Dark Ages lasting for a thousand years.

The lessons of classical antiquity, Greek and Roman sculpture, architecture and literature did not surface again until the start of the Renaissance in Italy. The beginnings of the Italian Renaissance centred on Tuscany and on Florence in particular.

The Italians of the period considered themselves to be living in a golden age, superior to anything since the fall of the Roman empire a thousand years earlier, with painting, sculpture, music, poetry and architecture all awakening to a revival after sleeping for centuries.

Italian Renaissance Art began with Giotto (c. 1267-1337) who is considered to be the first painter to have broken with the tradition of Byzantine art at the end of the middle ages. Giotto made advances in representing the human body in a more realistic way, and his technique was the first to realise this change since the times of classical antiquity.

Florence was a major financial centre and, for around sixty years, was dominated by the Medici family. The Medici became patrons of art and lie at the heart of the early Renaissance. The family was one of the wealthiest in Europe and were among the most important patrons of the arts in Renaissance Italy. Go to the Medici page to see just how important their patronage was. 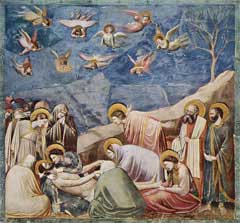 It is largely due to the Italian painter and architect Giorgio Vasari that we have such a wealth of information about the artists of the Italian Renaissance. His biographies have given us a valuable insight into the lives of the painters of the period and his influence cannot be overlooked. Go to Vasari's page to learn more about his work.

The Black Death of 1348 swept across Europe and it has been estimated that one-third of the population died as a result of this pandemic. This decline in population continued and in 1450 the population of Europe was around half of what it had been in the early part of the fourteenth century.

This almost unique slump in population resulted in major cultural changes, land became more abundant and labour became scarcer. This led to a society dependant on trade and industrial enterprise rather than on a land and rent based system.

The result was that the innovation started by Giotto was not taken up again until much later by such artists as Masaccio, Donatello, and Brunelleschi.

Arts of the Italian Renaissance.

Almost all of the art of the period has a religious theme with scenes from the bible taking prominence.

Brunelleschi was responsible for the emergence of both renaissance architecture and perspective drawing, his work had a profound influence on the sculptors and painters of the day.

Donatello, along with his contemporary Ghiberti, was the greatest sculptor of the fifteenth century, he produced a range of astonishing work over a sixty-year period.

Masaccio was the most accomplished painter of the early fifteenth century. His paintings incorporate the lessons learned from his personal connections with Brunelleschi and Donatello.

Following in the footsteps of Masaccio, Brunelleschi and Donatello came a succession of artists who produced work of outstanding quality. Painters such as Sandro Botticelli, Fra Angelico, Paolo Uccello, Filippo Lippi, Pierodella Francesca and Domenico Ghirlandaio are examples of artists who continued the artistic development of renaissance ideas.

The printing press and availability of books.

The printing press was invented by Gutenberg who lived in Strasbourg in the 1440s. Before the printing press written works had been confined to manuscripts, Gutenberg's invention led to the production of affordable books that could be widely distributed on a scale that had been unimaginable previously.

Small editions of the classics begin to appear in 1500, championed by the printer Aldus Manutius in Venice. This innovation marked the birth of the modern book, vital to the intellectual development of the Renaissance.

In terms of painters, the Renaissance artists developed realistic liner perspective, developed by Brunelleschi and executed by artists such as Masaccio, they studied light and shadow in the search for realism in their work.

The Leading Powers In Italy was Florence, a financial centre, and Venice, then a major maritime power. The Papacy was in exile in Avignon and it is only when Rome was once again the seat of the rejuvenated Papacy that Italy's leadership began to pass to that city.

The Early Italian Renaissance gave rise to many innovations in medicine and science and literature. The generation of artists after 1500 culminated in the flowering of the arts known as the High Renaissance and included such greats as Michelangelo, Leonardo and Raphael.

The High Renaissance features on this site, as an article in its own right. 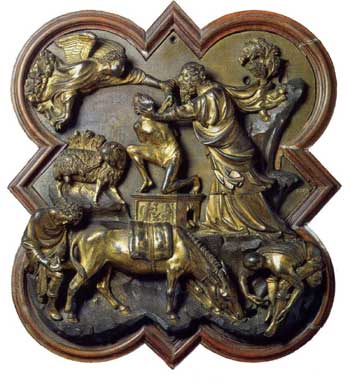 Notes on image use
Home Page 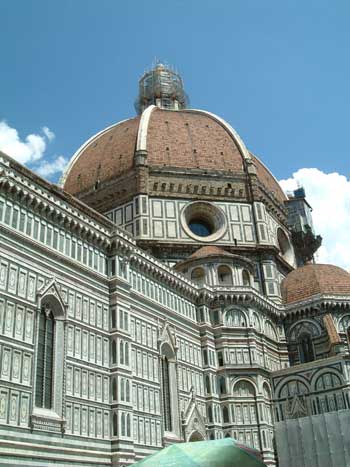