Piero della Francesca was born in the decade between 1410 and 1420 but his exact date of birth is unknown. He studied under the guidance of Domenico Veneziano and Domenico's interest in colour and his study of light made him the perfect teacher for the young artist.

Piero is known to have worked with Veneziano, as his apprentice, on frescoes for the hospital of Santa Maria Nuova in Florence.

Most of Piero's mature work was executed in his hometown of Borgo Santo Sepolcro, or in Arezzo located in Tuscany to the south-east of Florence. His work was neglected for centuries and he was not well regarded in his lifetime.

In 1442 he was commissioned to paint an altarpiece for the church of the Misericordia in Borgo. He also painted frescoes in the Castello Estense and in the church of Sant'Andrea in Ferrara, but these paintings are sadly lost.

Piero della Francesca also knew Fra Angelico, he was acquainted with Masaccio, Brunelleschi, and the mathematician and architect Alberti.

The Baptism of Christ. 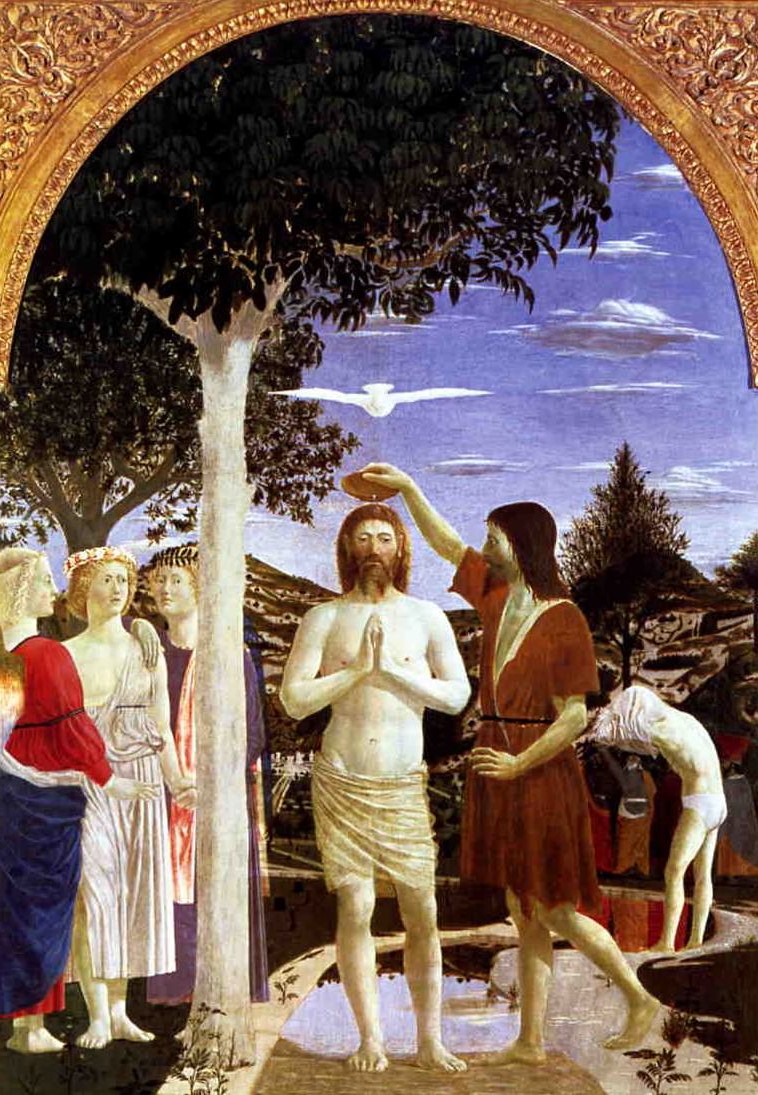 The Baptism of Christ is one of Piero della Francesca's earliest works. The geometrical formation of this painting stems from a square with a semicircle positioned at the top of the picture.

A dove hovers directly above the head of Christ. A strong vertical is created by the figure of Christ who takes centre stage in the painting. This vertical is further emphasised by John the Baptist, the tree, and the three onlookers to the left.

Reflections in the water mirror parts of the landscape, sky, and in the figures who are placed in perspective in the background. Piero’s knowledge of perspective can also be seen in the snaking waters that recede into the painting.

The Wolf of Rimini. 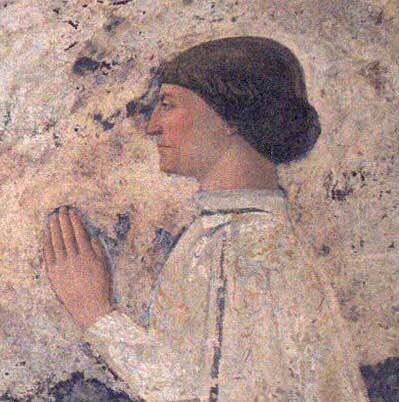 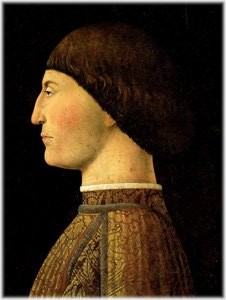 The nobleman, Sigismondo Pandolfo Malatesta, was the lord of Rimini from 1432. He was a patron of the arts and had built a reputation as a daring military leader earning him the nickname, The Wolf of Rimini.

In 1452 he began his famous fresco cycle "The Story of the True Cross" for the Basilica of San Francesco in Arezzo. 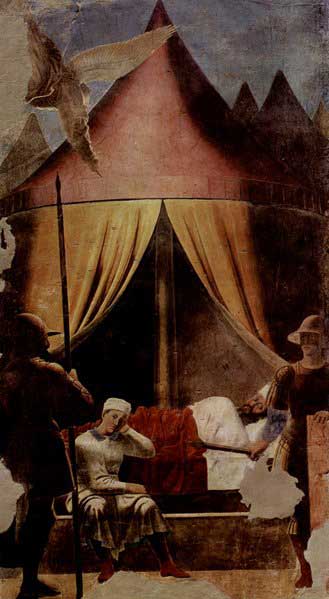 "The Dream of Constantine." from "The Story of the True Cross." (w)

Based on stories from the Golden Legend, this is considered to be a Renaissance masterpiece. Inspired by The Lives of the Saints from the 13th-century book by Jacobo da Varagine this is Piero's most extensive work.

The story of the True Cross is the story of the rediscovery of the Cross of Christ and its return to Jerusalem in the year 615. In this cycle of ten frescoes, Piero has depicted the biblical rulers as political figures of the day.

At the time when the True Cross was painted this gave the series a greater modern political edge.

The Dream of Constantine is remarkable. (Detail of a fresco; the church of San Francesco, Arezzo).

It is the first night scene to have been painted by an Italian artist. Light as the subject of a work of art had not been explored by anyone before Piero’s remarkable work.

The artist moved to Rome and painted frescos in the Santa Maria Maggiore but these works, and his Vatican City paintings have been destroyed.

Two notable works from about 1460 are "The Flagellation" and "The Resurrection". 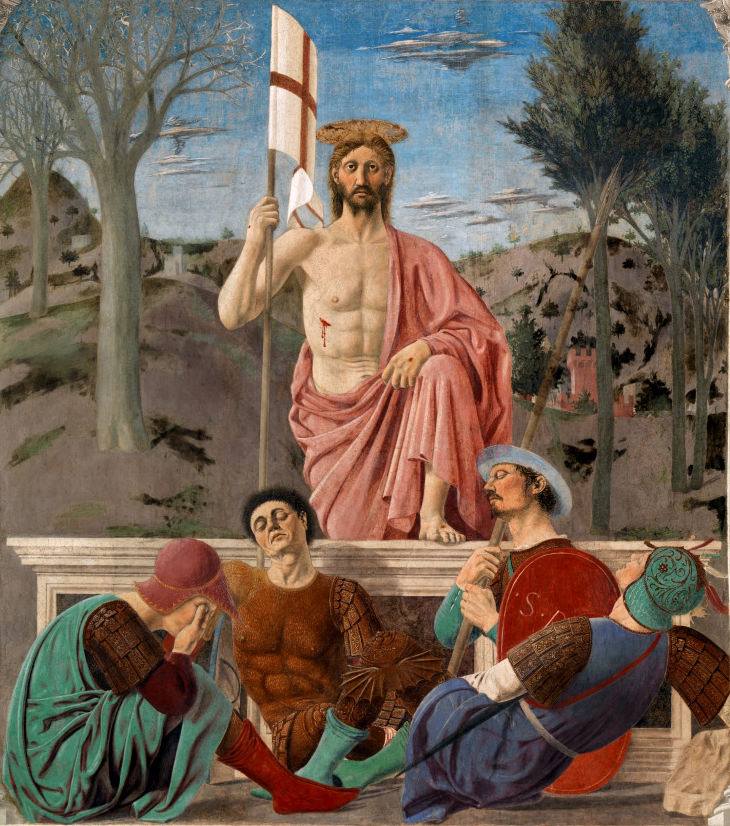 The sleeping man, second from the left, is reputed to be a self-portrait of the artist. 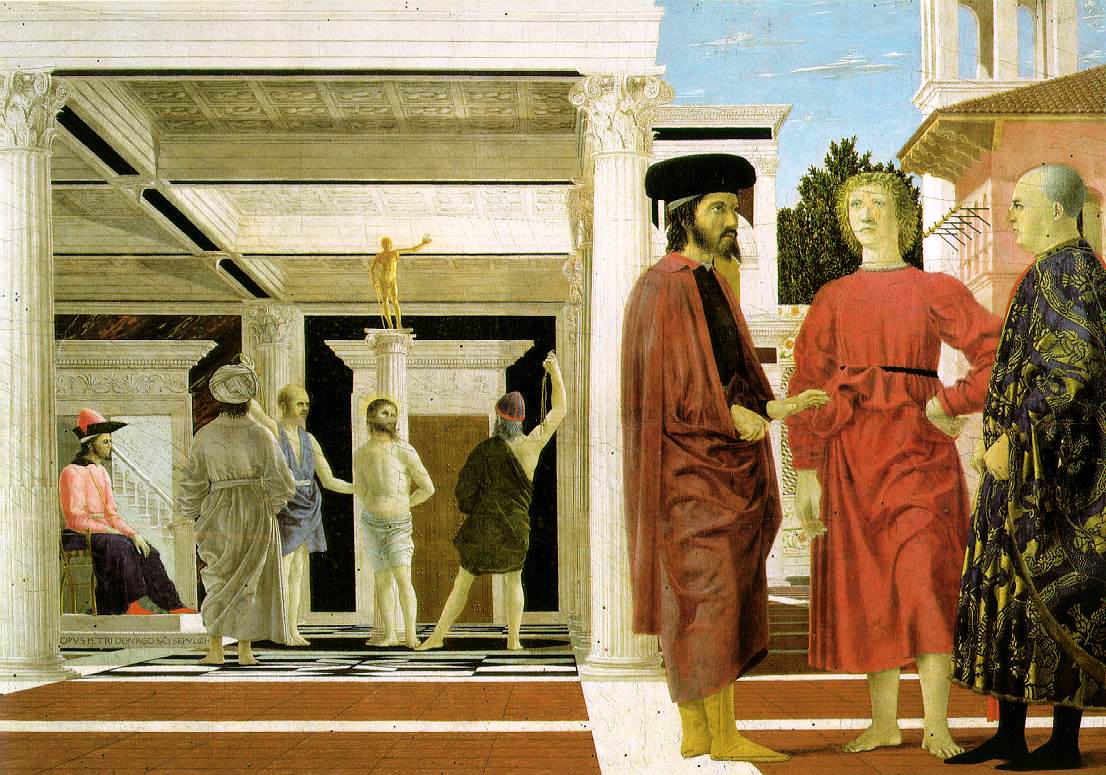 This is a strange work. The main theme of the painting, Christ being flogged at the pillar, takes place in the background of the picture. 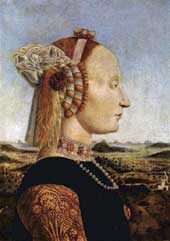 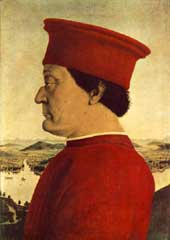 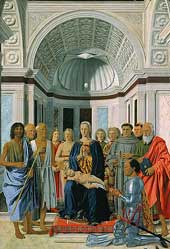 Piero della Francesca's last works are the Brera Altarpiece with "The Madonna and Child with angels and six saints", and his unfinished "Nativity", about 1475 or later.

Piero passed away on 12 October 1492 the same day that Columbus discovered America. 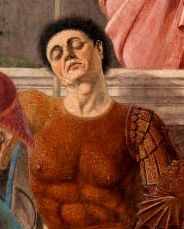