Leonardo da Vinci was regarded as an astonishing virtuoso, even by his contemporaries of the time. Born in 1452 he was at work long before Michelangelo and Raphael who are considered to be the two other great masters of High Renaissance Art.

Little is known about his early life, da Vinci simply means, of the town of Vinci, a town in the territory of Florence. He was actually born at Anchiano, a village close to Vinci, the son of Ser Piero and a peasant girl Caterina. 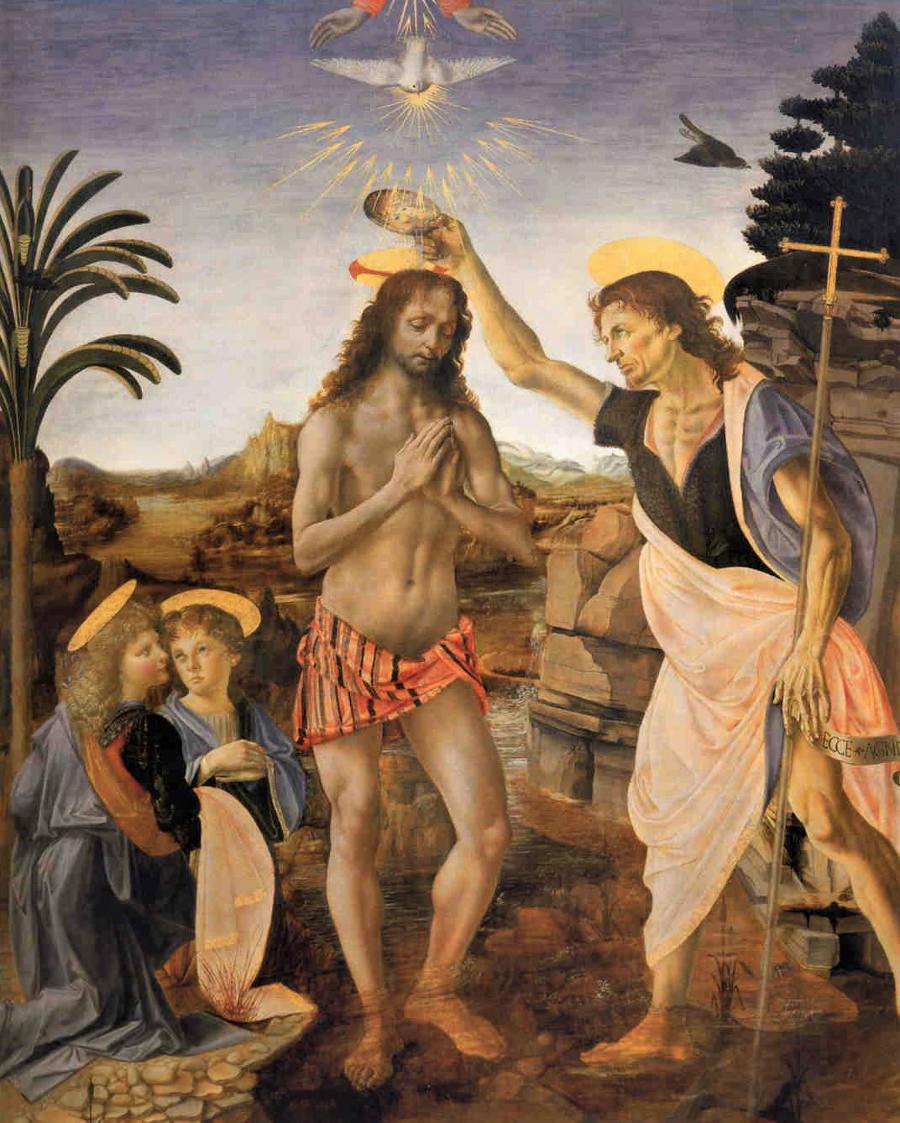 The legend of Leonardo's physical beauty has been chronicled by Vasari, and since there is no description or portrait of him, we assume that Vasari's writings are based on fact.

His schooling was basic and followed the traditional educational teachings of the time. This lack of higher education was apparent in his struggle to understand Latin.

Many classical documents were written in Latin, and it was with a source frustration that he had to resort to reading translations of scientific subjects rather than the original papers.

Leonardo was a vegetarian who loved animals and by 1469 he was living with his father on the Piazza San Firenze in Florence.

His early apprenticeship began at the age of fourteen, in the workshop of painter and sculptor Verrocchio. Verrocchio was one of the most renowned artists of his day and other painters with connections to his workshop include Botticelli and Ghirlandaio.

However, Leonardo Da Vinci is the artist who is mostly associated with Verrocchio.

In this workshop, the young Leonardo would have learned many skills and was introduced to metalwork, perspective, plaster casting, carpentry and mechanics, in addition to painting and drawing.

The first account of Leonardo's genius is seen in the painting of The Baptism of Christ, the angel on the left of the picture is attributed to him. This painting, executed mainly be the hand of Verrocchio, is now in the Uffizi Gallery in Florence.

It has been suggested that Verrocchio thought Leonardo's work to be so superior to his own, that he vowed never to paint again.

Leonardo became a Master in the Guild of Painters in 1472 and had his own workshop in Florence. His Annunciation was painted in 1473 and at the time he was still living in Verrocchio's house.

Other works from this early Florentine period include the Annunciation, the Portrait of Ginevra de'Benci, the Benois Madonna, and his unfinished picture of St Jerome.

In 1476 he, and three others were anonymously accused of sodomy with a teenage male prostitute. The crime of homosexual activity was widespread in Florence, and homosexuality was commonplace.  He was acquitted of the charge, re-charged and again acquitted, but there is no record of further work by him until 1478.

The question of Leonardo's sexuality has been a matter of speculation, but it is generally thought that he was homosexual or bisexual. The fact remains that although we have documented details of his employers and movements, details of his private life are very sparse.

Da Vinci was commissioned to paint an altarpiece, The Adoration of the Magi, for a monastery just outside Florence. The work (about eight feet square) is unfinished, probably because Leonardo had left Florence for Milan. 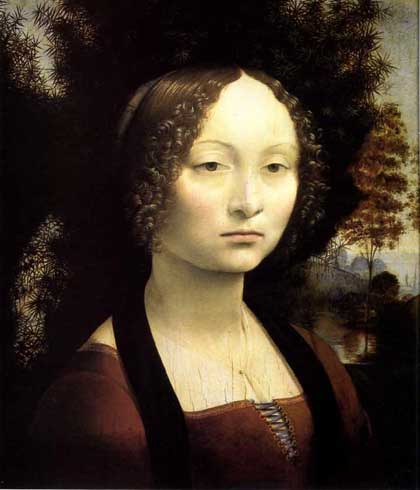 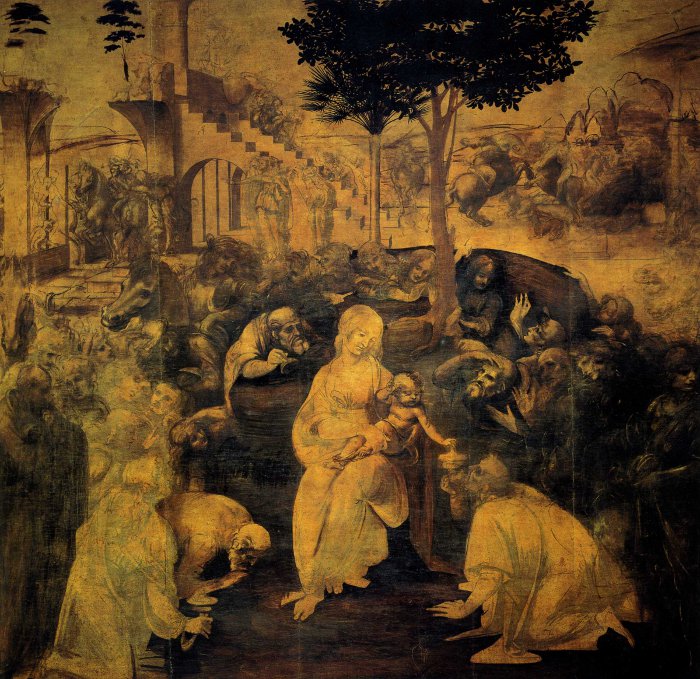 Adoration of the Magi. 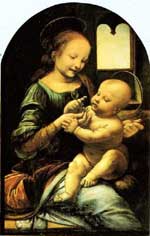 The reasons for Leonardo's departure from Florence are unclear. Some say that it was his lack of recognition by Lorenzo de Medici, also the artist had been overlooked for the decoration of the walls of the Sistine Chapel.

Pope Sixtus IV had summoned the finest artists in Tuscany to work on the Chapel. The Medici recommended Botticelli, Ghirlandaio and Signorelli but not Leonardo.

Among Leonard’s notebooks is a letter to the Duke of Milan, claiming that he could do almost anything, from engineering for the military through to acting as architect, sculptor and painter.

Two of Leonard da Vinci's most famous works were commissioned in Milan, The Virgin of the Rocks (two versions exist, one in the Louvre and one in the National Gallery in London) and, "The Last Supper". 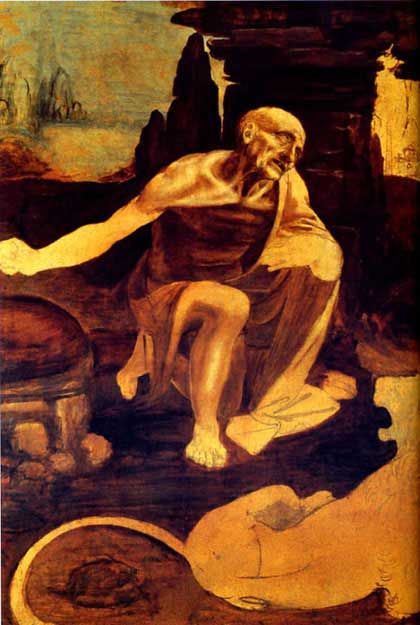 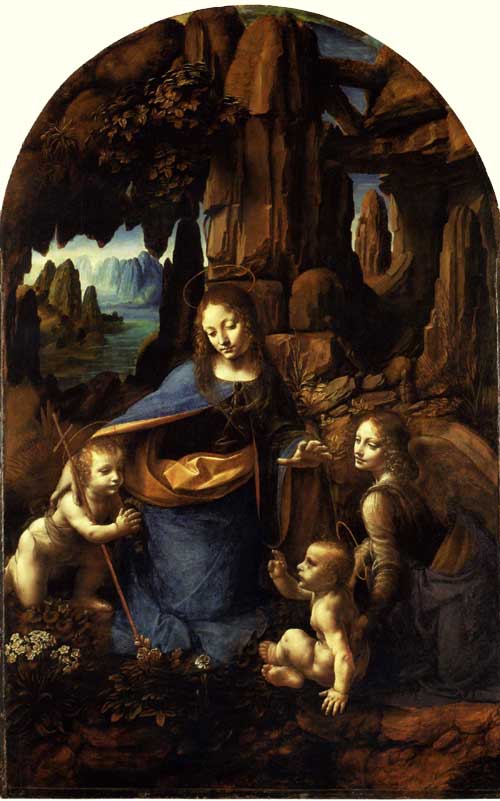 Virgin of the Rocks. 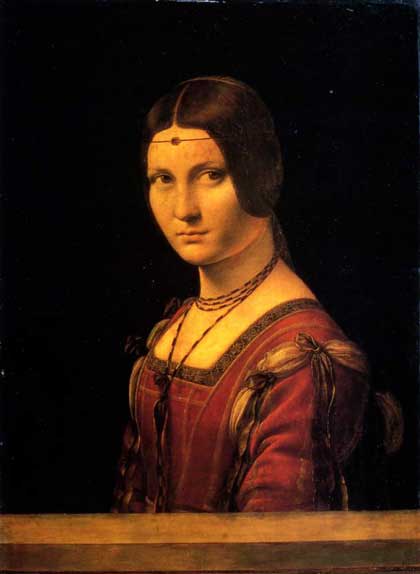 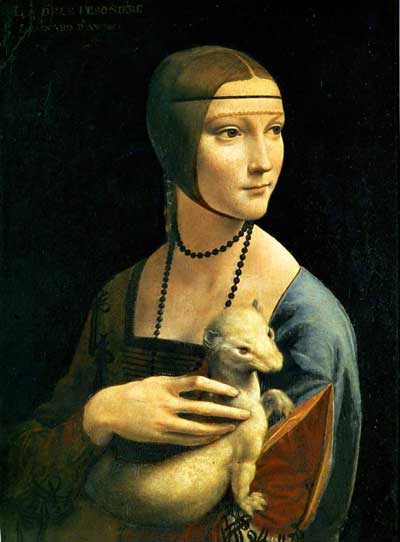 The Lady with an Ermine.

In Milan, Leonardo worked on various projects for Ludovico il Moro Sforza (The Duke of Milan) including modelling huge clay horse intended to be cast in bronze. Like much of his work, this project was never completed and was eventually destroyed by the French who invaded Milan in 1499.

Da Vinci was accepted into the Sforza court and enjoyed comfortable surroundings, in return he completed designs for war machines and was listed as an engineer by the Sforza family.

It would seem that Leonardo became quite the court painter within the Sforza circle. Notably, he completed portraits of two of the Duke's mistress' Cecilia Gallerani, entitled The Lady with an Ermine.

The second portrait is of Ludovico Sforza's mistress Lucrezia  Crivelli, known as La Belle Ferroniere. He also completed (perhaps with the aid of assistants) The Madonna Litta. 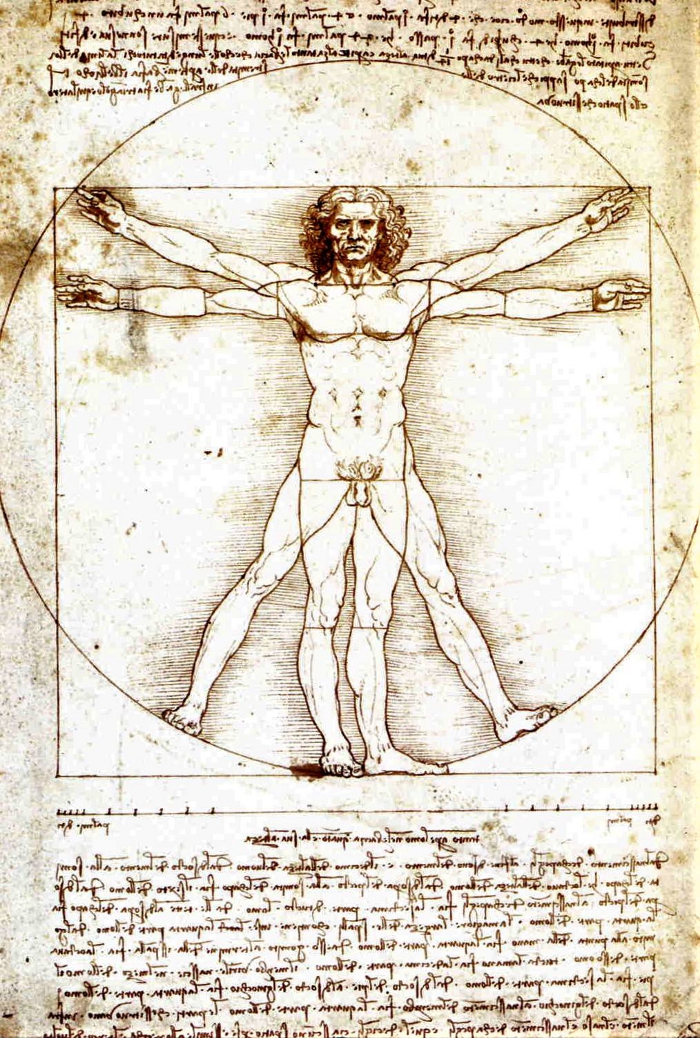 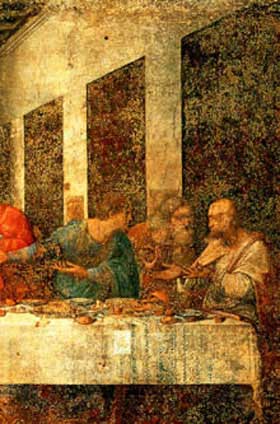 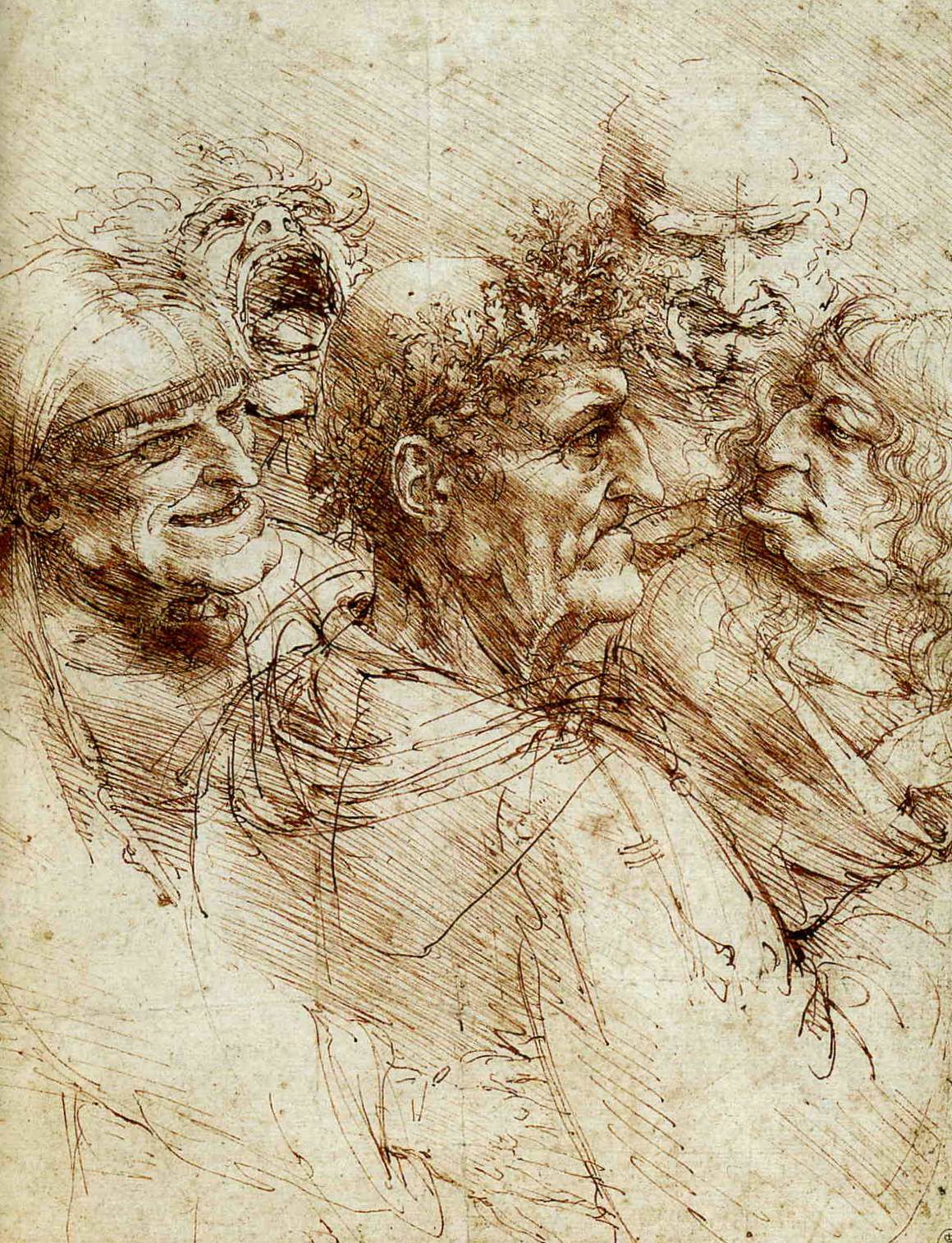 Leonardo Da Vinci's most famous drawing is The Vitruvian Man, the figure of a naked man placed within a circle and a square. The arms and legs are shown in two positions superimposed on one another, it was made as a study of the proportions of the human body.

On the French invasion, Leonardo fled to Venice and was employed as an engineer and worked on methods of defending the city from naval attack. He had many scientific plans with concepts far ahead of their time, these included plans for a flying machine (he had observed and studied the flight of birds).

Leonardo also studied anatomy and was given permission to dissect corpses and, as his anatomical drawings show, he was one of the first to explore the growth of a child in the womb.

The second period in Florence. 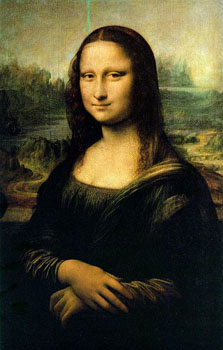 In 1500 Leonardo was back in Florence, and around 1502 painted the wife of a Florentine official, the Mona Lisa, destined to become the most famous image in art.

During this Florentine period, he produced designs for a fresco intended for the Grand  Council Hall of the Palazza Signoria. Leonardo da Vinci was in direct competition with Michelangelo who had also been commissioned to produce a design.

Michelangelo's chosen subject was the Battle of Cascina, taken from the wars between Pisa and Florence.

Leonardo's choice was the Battle of Anghiari, in which Florentine forces triumphed over Milanese mercenaries in 1440.

Details of this unfinished work exist only as copies by later artists (such as Rubens) based on Leonardo's detailed records. Leonardo also began work on the Virgin and Child with St Anne and a Lamb (completed c.1508). In 1501 he painted a small work The Madonna of the Yarnwinder.

Also in 1502 he was employed by Cesare Borgia as a military engineer and architect and travelled throughout Italy with this notorious adventurer.

I was disappointed with the way the Mona Lisa was displayed in the Louvre. It was encased in a glass cabinet and set back quite a few feet, several sets of headphones were available and gave a commentary on the painting in various languages.

I like to get close to a painting and almost touch the brush strokes and, as the Mona Lisa is quite small, it was too far away for any intimate inspection.

This does not distract from the greatness of a work that has been copied countless times but is probably due to overzealous security at the Louvre.

Milan was now governed by Charles d' Ambrose in the name of his master Louis XII of France. Charles requested Leonardo's presence in the city, and by May 1506 he was once again working in Milan.

The nobleman Gian Giacomo Trivulzio set Leonardo the task of creating a monumental tomb to be located in the church of San Nazaro. Da Vinci was once again working on a large-scale commission that drew comparisons to his doomed equestrian statue for Francesco Sforza some years earlier.

This period saw a marked increase in Leonardo's botanical studies once again highlighting the diverse nature of his intellect.

Like the Sforza statue, the Trivulzio monument was never completed, mainly due to fears of war against the French occupancy of Milan. In 1512 the French were finally driven out of Milan by an alliance between the Pope, Spain and Venice led by Massimlliano Sforza, the son of Ludovico.

By September of 1513, Leonardo Da Vinci was in Rome. He was valued as an engineer rather than a painter and was given the task of draining the Pontine Marshes around the city. Most of the commissions for paintings had been given to Michelangelo and Raphael, artists who seemed to be preferred by the Pope.

However, Leonardo was given a special dispensation allowing him to dissect bodies and continue his anatomical studies. The papacy had banned dissections, but it was believed that Leonardo was searching for the seat of the soul, seen as a worthy project by the church.

Unfortunately, rumours were being spread that Leonardo was a sorcerer, these rumours led to the Pope banning all further dissections.

In 1516 King Francis 1st of Franc offered Da Vinci a pension and a small chateau at Cloux on the Loire river. Leonardo was given the title of Foremost Painter and Engineer and Architect to the King of France and Technician to the State of France.

He was a celebrity, admired and visited by the young King in his studio.

The artist's health began to fail and he dictated his last will and testament on 23rd April 1519, Leonardo da Vinci died on May 2nd of the same year aged sixty-seven. 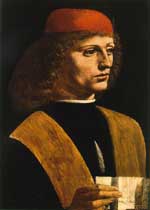 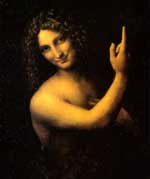 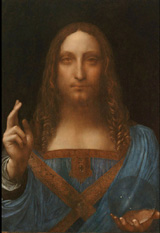 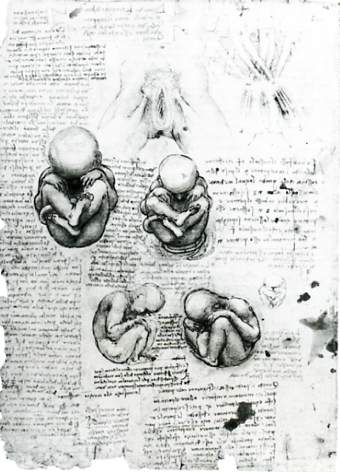