Born in c. 1450 the, exact date of his birth is not known, the work of Hieronymus Bosch has a surrealistic, cartoon-like quality and expresses the moral failings of the human condition with utter pessimism. He lived in the town of  's-Hertogenbosch, in northern Brabant, now Holland, for all of his life.

Bosch came from a long line of painters, both his Grandfather and Father were painters and his Father, Antonius van Aken, was an adviser to the Brotherhood of Our Lady, a religious group made up of influential citizens of  's-Hertogenbosch.

Very little is known about his life, he left no letters or written diaries, and almost all of the information we have comes from the official records of his hometown 's-Hertogenbosch. Bosch married Aleyt Goyaerts van den Meerveen in about 1480.

His new wife came from a wealthy family and had inherited land in the nearby town of Oirschot.

In 1488, following in the footsteps of his father, he joined the Brotherhood of Our Lady. The influence of the brotherhood enhanced the artist's reputation. Bosch's work was popular in his own lifetime, and he received commissions from Austria, Spain and the Netherlands.

None of Bosch's work is dated although most are signed by the artist, attribution of his work remains difficult, today no more than 25 works are officially attributed to him.

The accounts of the Brotherhood of Our Lady record the death of Hieronymus Bosch in 1516. The records show that a funeral mass in his memory was held in the church of Saint John on 9 August of the same year. 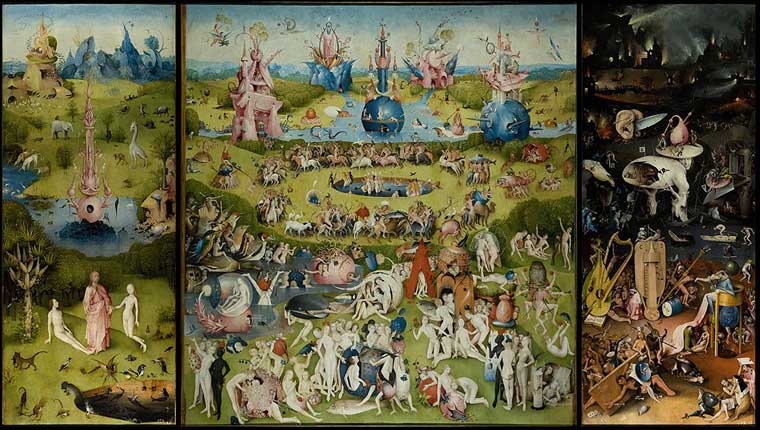 His most famous work is the incredible triptych, the Garden of Earthly Delights. This is a work filled with surrealistic images, depicting Adam and Eve on the left-hand panel, the nude figures of the garden of earthly delights in the centre panel and, on the right-hand panel, a dark vision of the punishments of hell. 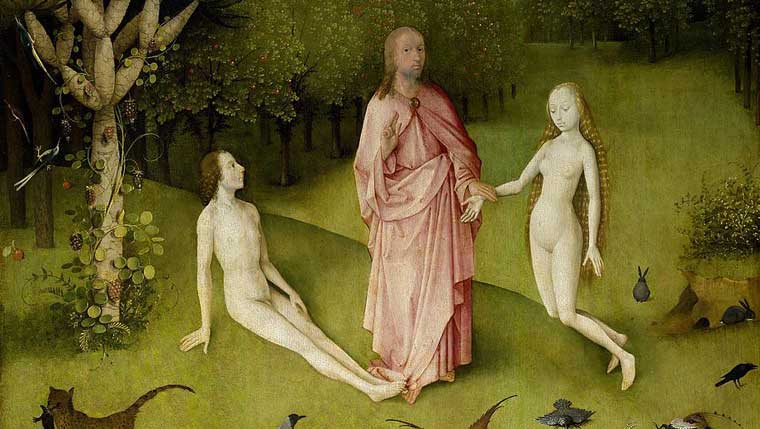 In this first panel, Bosch has placed God with Adam and Eve in a garden living in harmony with the animals that inhabit the fantastic but serene landscape.

This is the beginning of the narrative of the triptych that, despite the fantastic images, contains the basic religious message of the times and warns of the dangers that await anyone who strays from the path of righteousness.

This is the largest of the three panels. The scene depicts a strange mixture of weird animals and organic shapes set in a lush garden of green grass and flowing water.

The human inhabitants of the garden are engaged in various acts of carefree enjoyment as they ride naked on horseback or bathe in the lakes and pools within the garden. 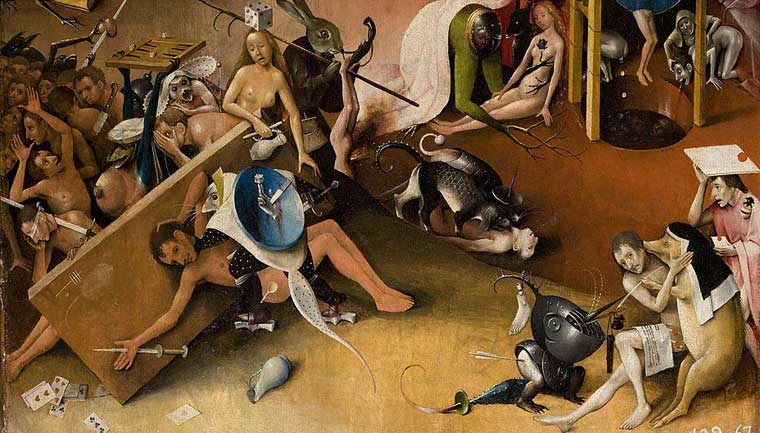 The joy of the centre panel gives way to a dark vision of the punishments of hell. Death and destruction follow the sins of man as humanity is forever trapped in a cycle of torture and torment.

The strange animal-like creatures now feast on human flesh, swords and daggers slice into the hapless victims and figures, grey with sickness, defecate and vomit trapped in their perpetual agony. 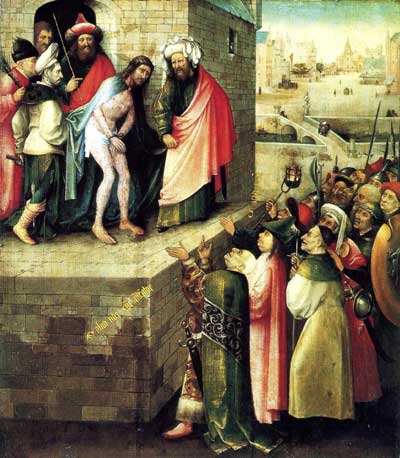 Bosch's painting of Christ displayed to the crowd is another example of the pessimism displayed in much of the artist's work.

The rather pathetic figure of a hunched Christ is jeered by a crowd of wealthy, smug and pitiless onlookers.

The fact that a man (Christ) stands before them broken and almost naked, smeared with blood from his tortures, does not soften the attitude of this ugly gathering. 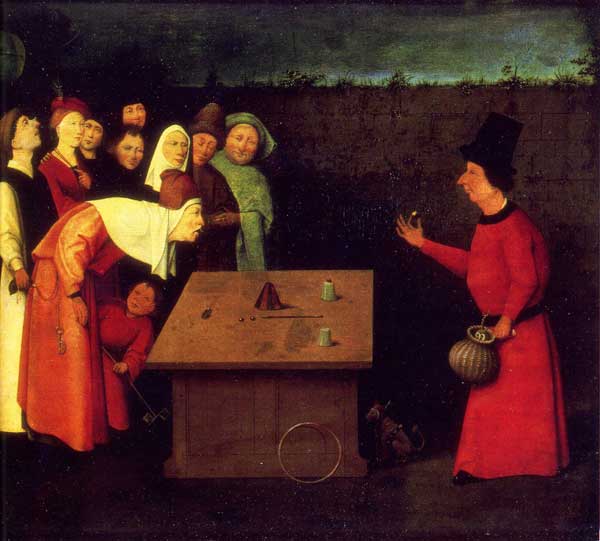 Bosch, for all his depictions of suffering and inhumanity, does display a comical side to his nature in this well-observed painting. The conjurer displays his sleight of hand, an onlooker bends at the table as a frog is produced from his mouth and, while the crowd are distracted watching the show, the conjurer's assistant is busy removing the victim's purse.

The vivid imagination of Hieronymus Bosch has created a world that has frequently drawn a comparison with the work of the Surrealist painters of the twentieth century. Certainly, when viewing Bosch's world of twisted, organic life forms and shapes, the question arises,
Is Bosch more surreal than the Surrealists?