Caravaggio.
A life of Art and Violence!

Caravaggio the colourful, sometimes violent street fighter but an ultimately brilliant painter, applied an extreme form of chiaroscuro (light and dark) to his works. His dark paintings with sections emphasised by strong highlights became the signature of his labours.

And what labours they were, he moved away from the idealised visions of the Mannerist and late Renaissance periods to paint real people in the dramatic terms that echoed his troubled life. 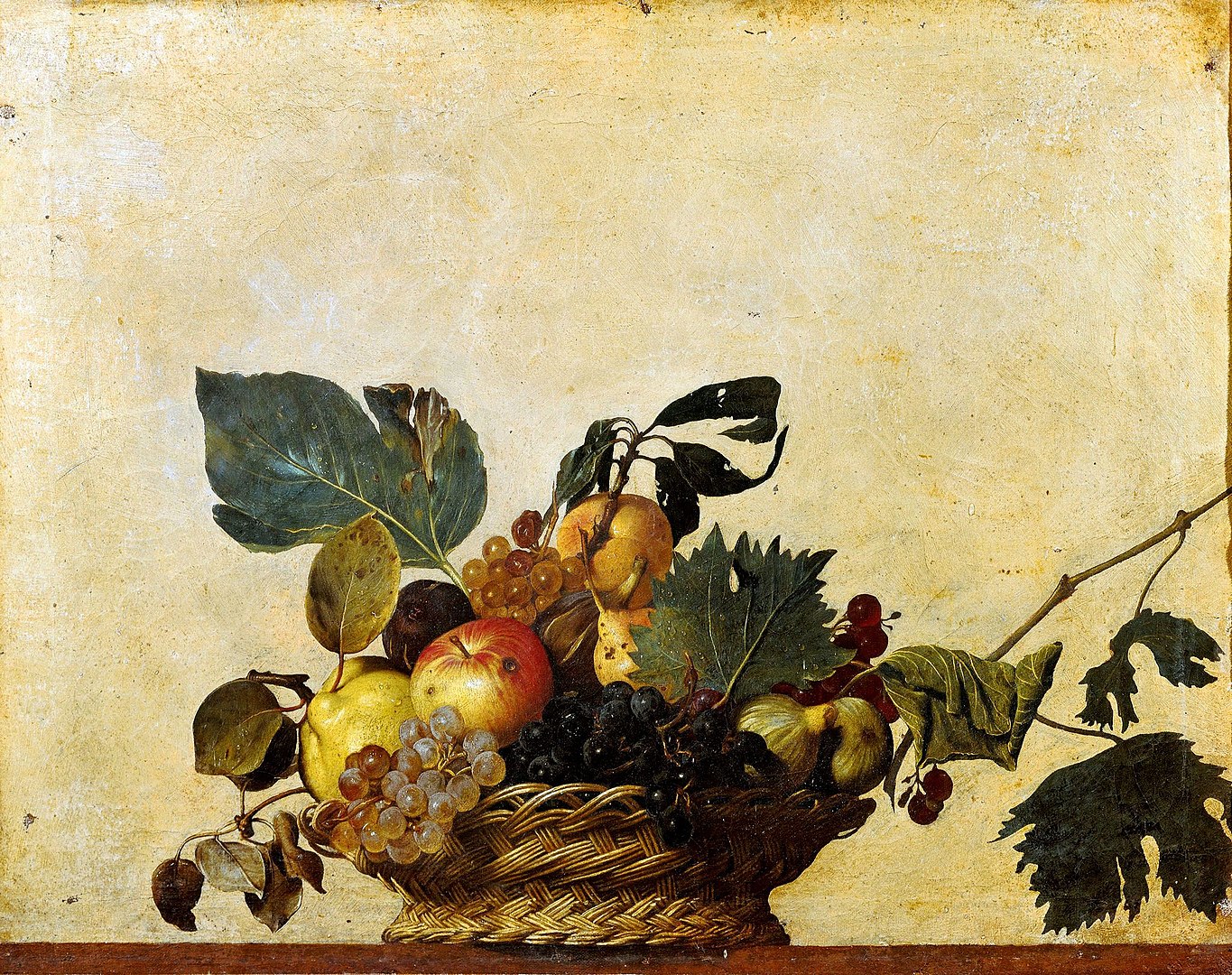 He was born in Milan on 29 September 1571 with the birth name Michelangelo Merisi. His father, Fermo Merisi, was a notary of the hill town of Caravaggio some 40 kilometres east of Milan. The family moved to the town in 1576, probably to avoid the plague sweeping the city.

After the death of his father in 1577 and his mother in 1584, the young artist was apprenticed to the Milanese painter Simone Peterzano. Peterzano was a pupil of Titian and his young apprentice would have been introduced to the works of the great artist and also Giorgione, possibly on a visit to Venice.

The Artist in Rome.

Caravaggio arrived in Rome in 1592, a penniless street urchin. With little or no prospects. He secured hack-work for the very successful painter Giuseppe Cesari, who was Pope Clement VIII's favourite artist. Cesari secured such a large amount of commissions that he employed helpers to finish the details on his paintings and so the streetwise artist  became a painter of flowers and fruit. 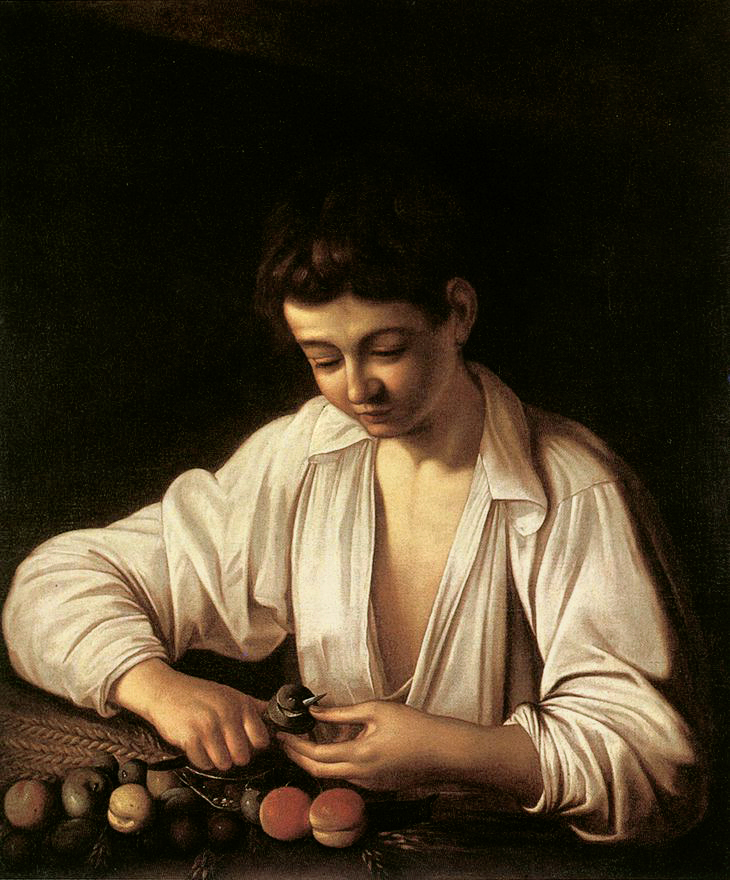 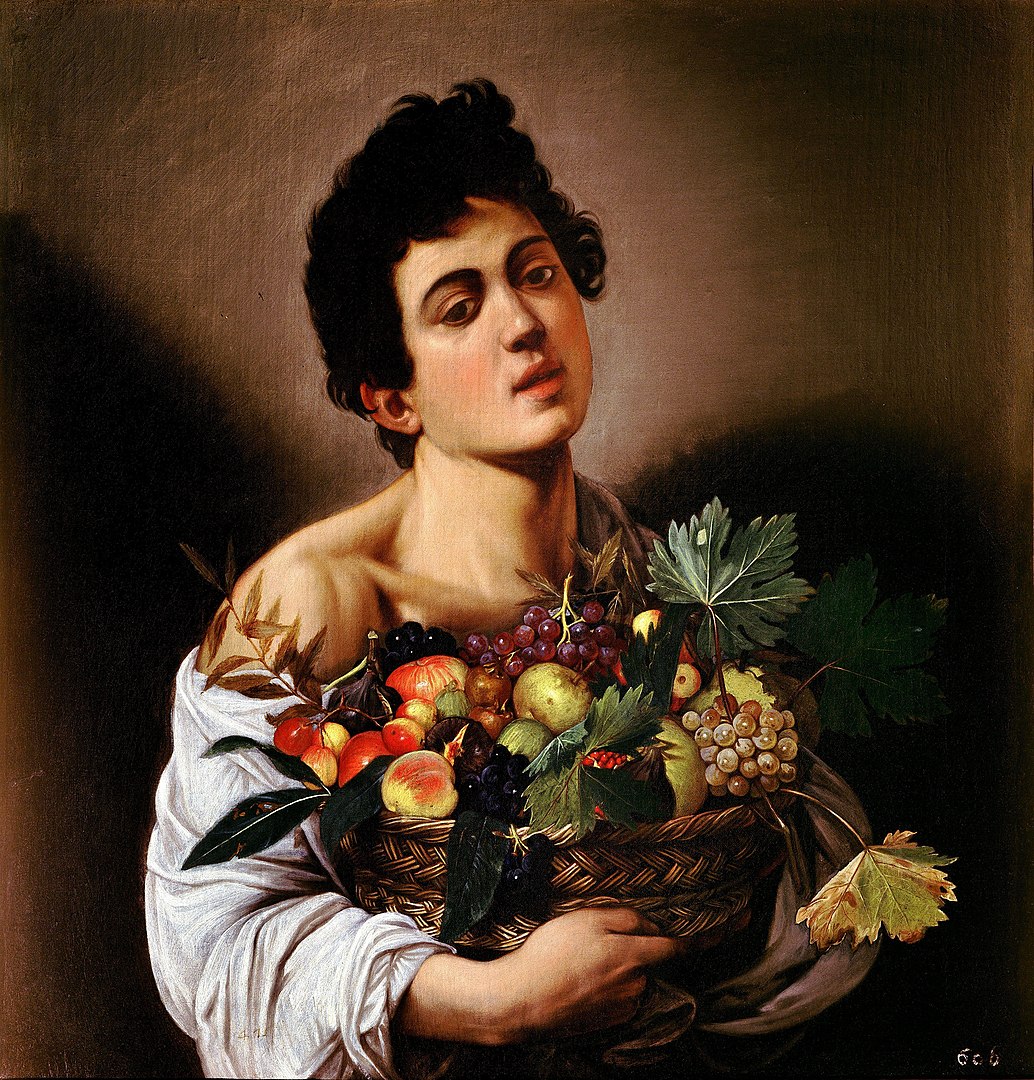 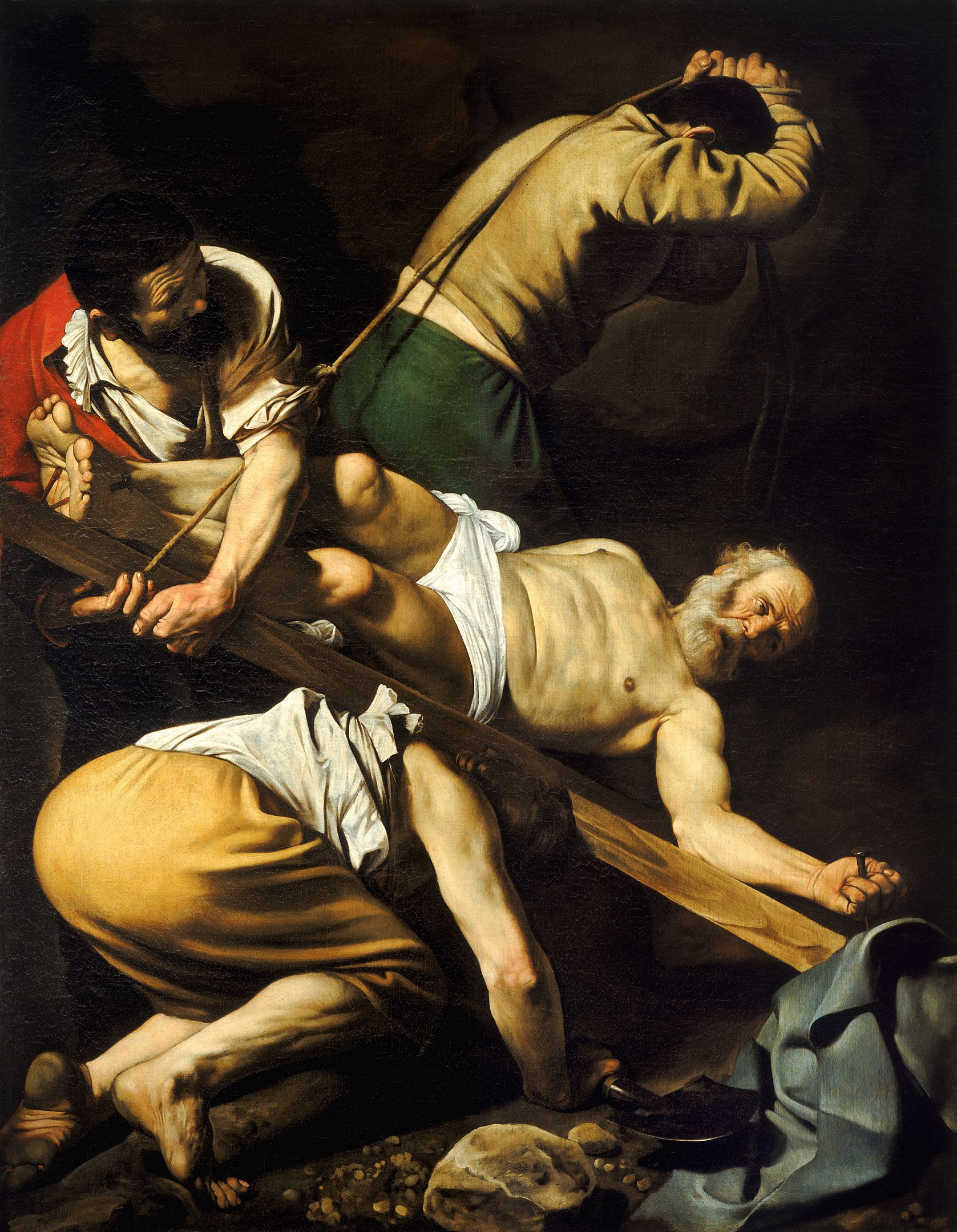 After contracting a serious illness Caravaggio left the Cesari workshop in January of 1594. It was during this period that he forged friendships with the artists Mario Minniti,  Prospero Orsi and the architect Onorio Longhi.

The sixteen-year old Minniti served as a model for several of Caravaggio's early paintings and it is possible that his closeness to Caravaggio had at least some bearing on the artist's reputation as a bisexual.

Longhi was almost as violent and unpredictable as Caravaggio himself and the two friends became involved in a series of street brawls. Caravaggio was brought to trial on numerous occasions during this period in Rome and most of the various charges against him involved some form of violent conduct.

The artist was becoming more well known. After his highly successful painting, The Cardsharps, he attracted the attention of one of the foremost collectors in Rome Cardinal Francesco Maria Del Monte who purchased the painting. 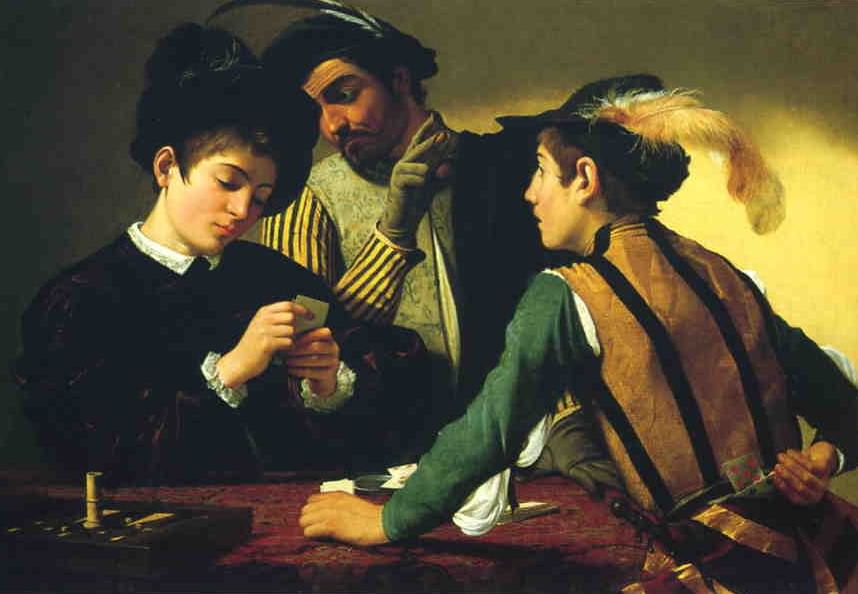 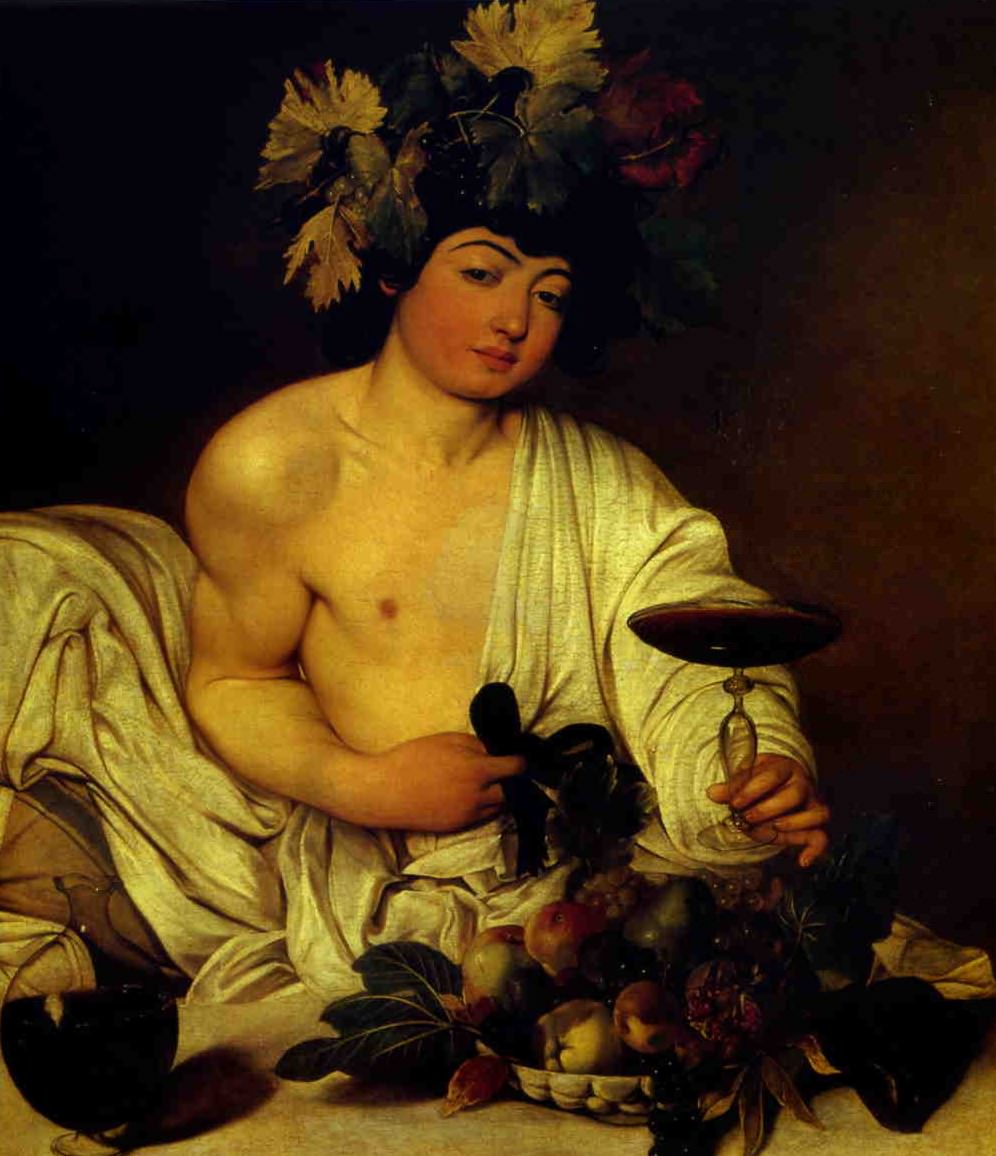 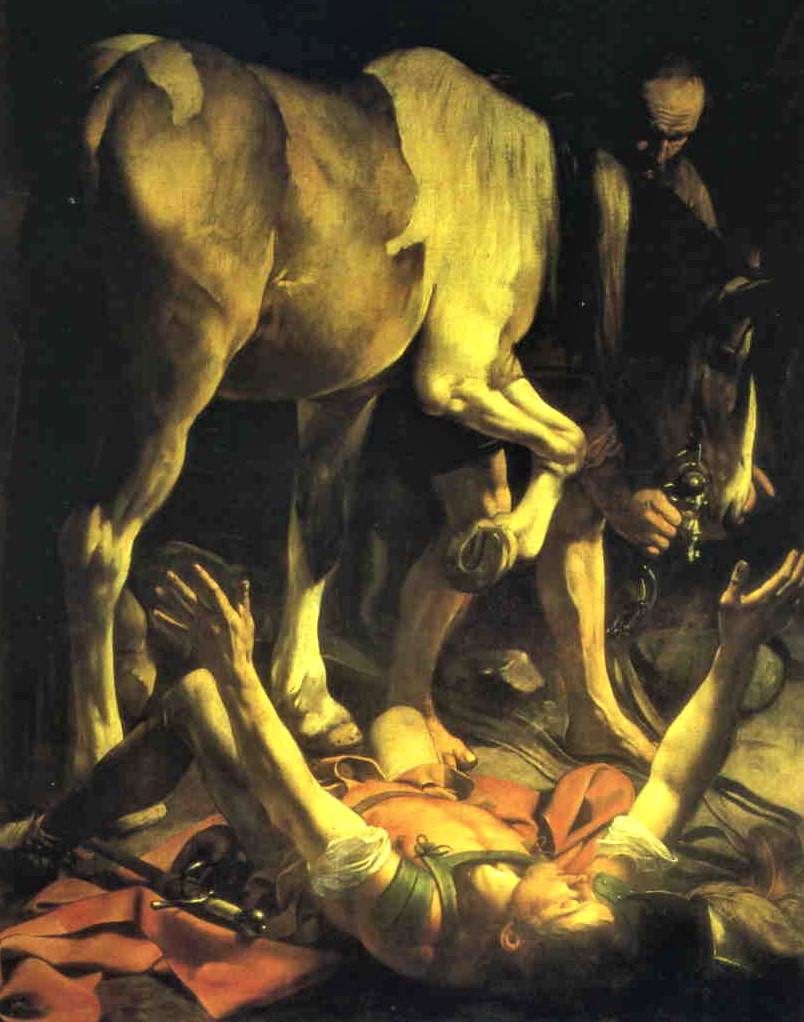 The artist received a commission to decorate the Contarelli Chapel in the church of San Luigi dei Francesi in Rome. His series for the chapel on the life of St Mathew was extremely well received but was also quite shocking and controversial due to the realistic nature of the works.

As a result, Caravaggio was, at this time, the most famous painter in the city. With this new found fame he was never again short of prestigious commissions ordered by the church or wealthy patrons, they consisted almost exclusively of religious subjects. 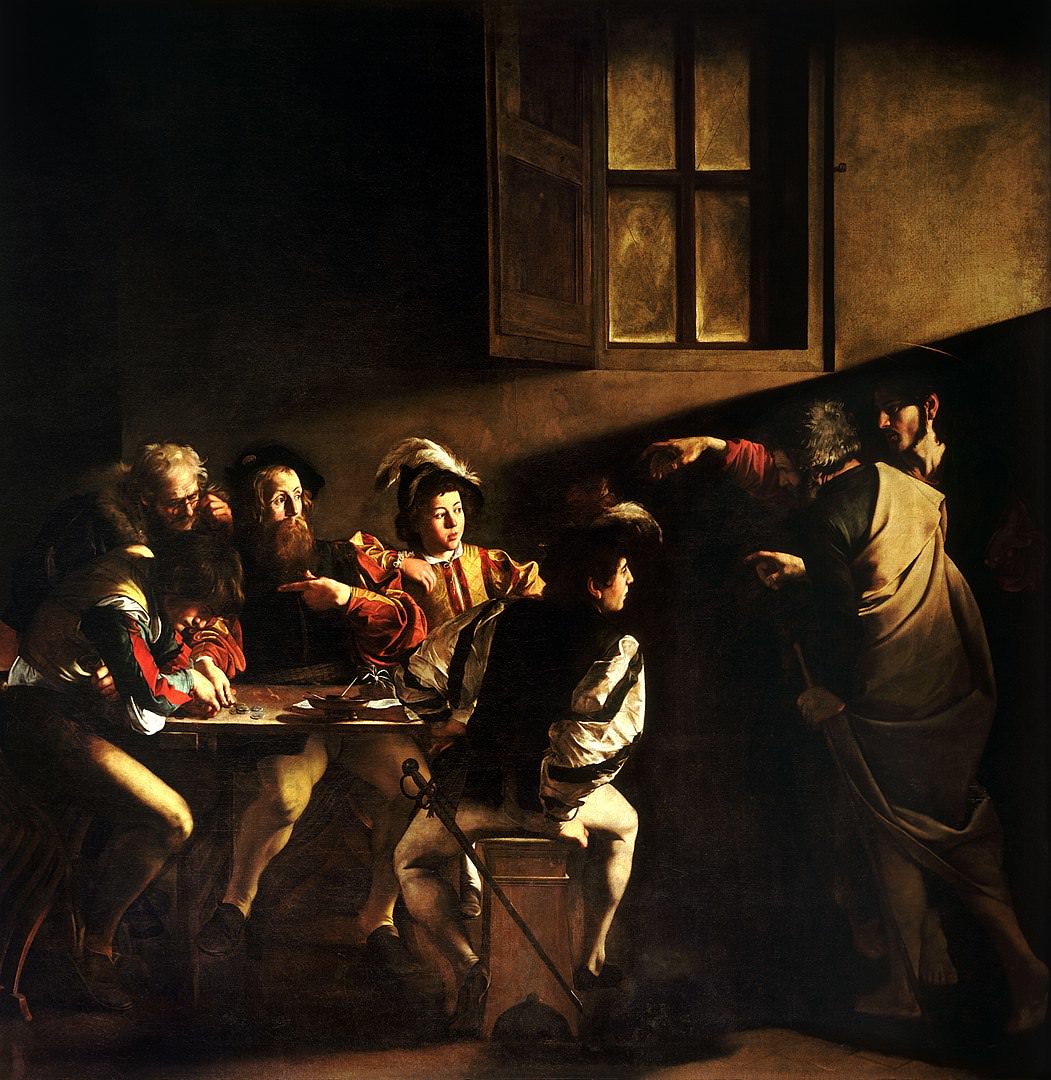 It should be remembered that Caravaggio's starkly realistic depictions of real characters painted from life, often using peasants and prostitutes as his models, was regarded as revolutionary. Because of the models used in his work, a number of his paintings appeared to be vulgar in nature and many of his finished works were rejected as unsuitable for their intended locations.

In contrast to the careful preparations of contemporary Italian paintings of the time he painted, without drawings, directly onto the canvas. Despite his newfound fame, he could not contain his violent tendencies and he took to roaming the streets in a drunken swagger looking for trouble. 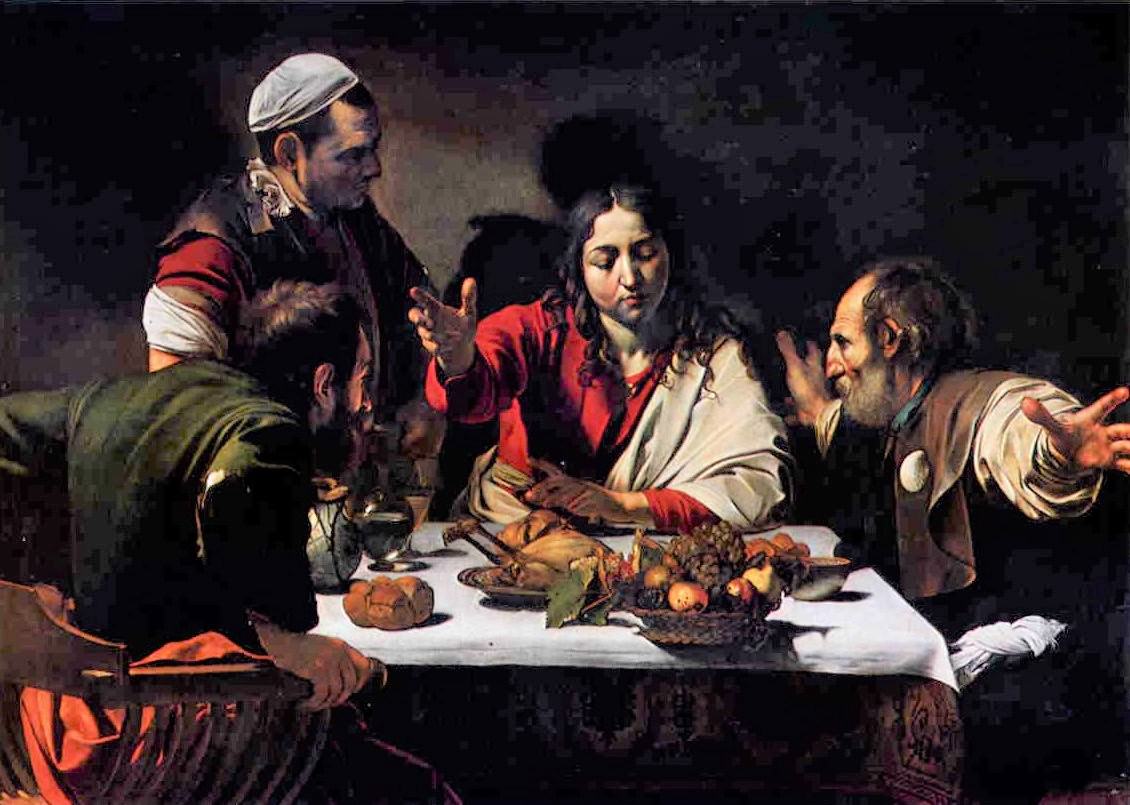 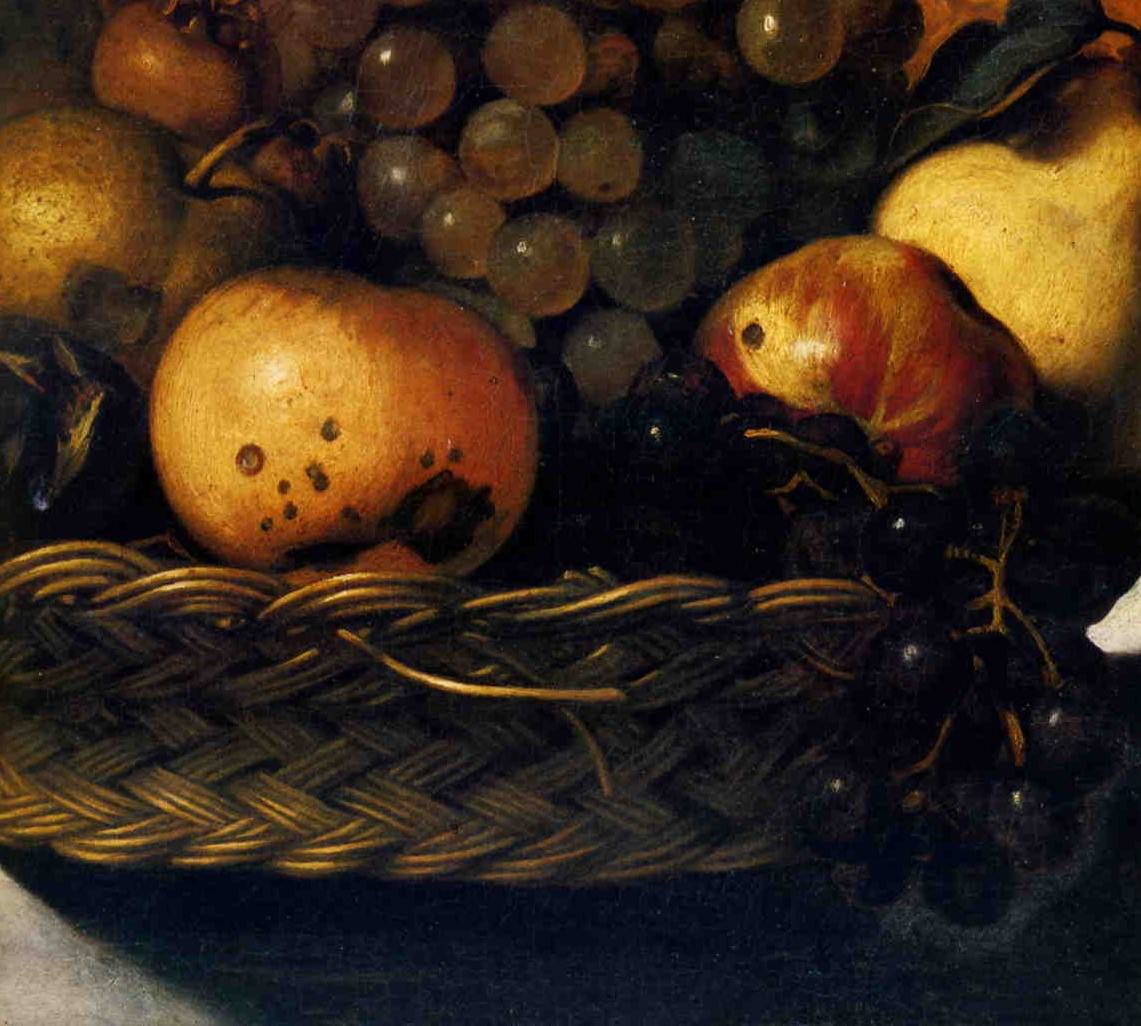 Detail of the fruit basket. (s)

Caravaggio's incredible attention to detail is apparent in his rendition of the basket of fruit from The Supper at Emmaus.

The colours of the slightly imperfect rotten apples are magnificent, also note the broken weaving of the basket that hangs  precariously on the edge of the table.

Expand the image to fully appreciate the genius of the artist's technique.

Caravaggio, the artist as a murderer!

The death of Ranuccio Tomassoni  In May 1606 followed a disputed game of tennis.
Tomassoni was a well known pimp to the prostitutes Anna Bianchini and Fillide Melandroni who had both modelled for the artist. It is possible that the disputed tennis match was just the flash point of a simmering rivalry between the two men.

Certainly, Caravaggio was leading an aggressive, sexually active life to the full. His closeness to the prostitutes, owned by Tomassoni, and his predatory pursuit of the pimp's wife, resulted in a jealous tension that ended in Tomassoni's death at the blade of the artist's sword.

He was charged with murder!

Cast as an outlaw he fled the jurisdiction of Roman law and arrived in Naples.

The artist in Naples and Malta.

In Naples Caravaggio enjoyed the patronage of the powerful Colonna family, reviving his old connections from his days in Milan. This patronage led to a steady stream of important commissions with religious themes at their heart. The artist's restless and violent tendencies surfaced and, once again, he was on the run. After several months in Naples, he surfaced in Malta.

Malta was the home base for the Knights of St John. Their leader, Alof de Wignacourt, was so impressed at having such a famous artist as official painter to the order that he inducted the artist as a knight. Despite his success in August 1608 he was arrested and imprisoned. This followed another brawl in which a fellow knight was seriously injured. The artist was expelled from the order of the knights as a "foul and rotten member."

He fled to Sicily and renewed his friendship with Mario Minniti, the artist who had served as a model in his early works. There was no shortage of well-paid commissions. Works from this period include The Burial of St. Lucy, The Raising of Lazarus and Adoration of the Shepherds.

Due to his outrageous behaviour, the artist had accrued many enemies and, in fear of his life, he returned to Naples. He again fell under the protection of the Colonna family. However, his enemies were closing in and an attempt was made on his life! It was reported, first that he was dead, and then that the famous artist had survived the attack but had received injuries disfiguring his face. 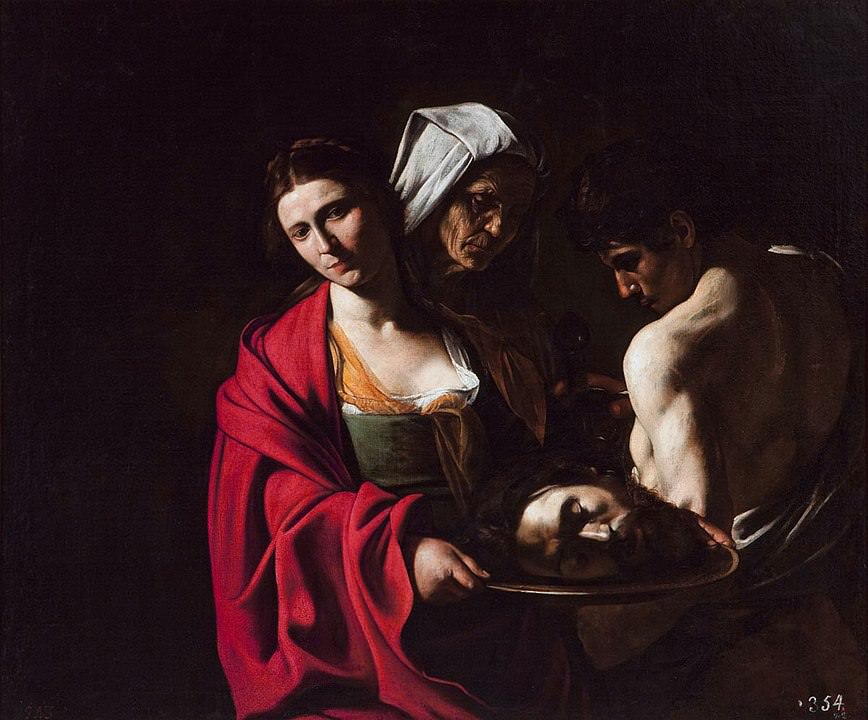 Salome with the Head of John the Baptist. 1609, Oil on canvas, Palacio Real de Madrid. (w)

Both the head  of John the Baptist and the head of Goliath (opposite) are self-portraits of the artist. 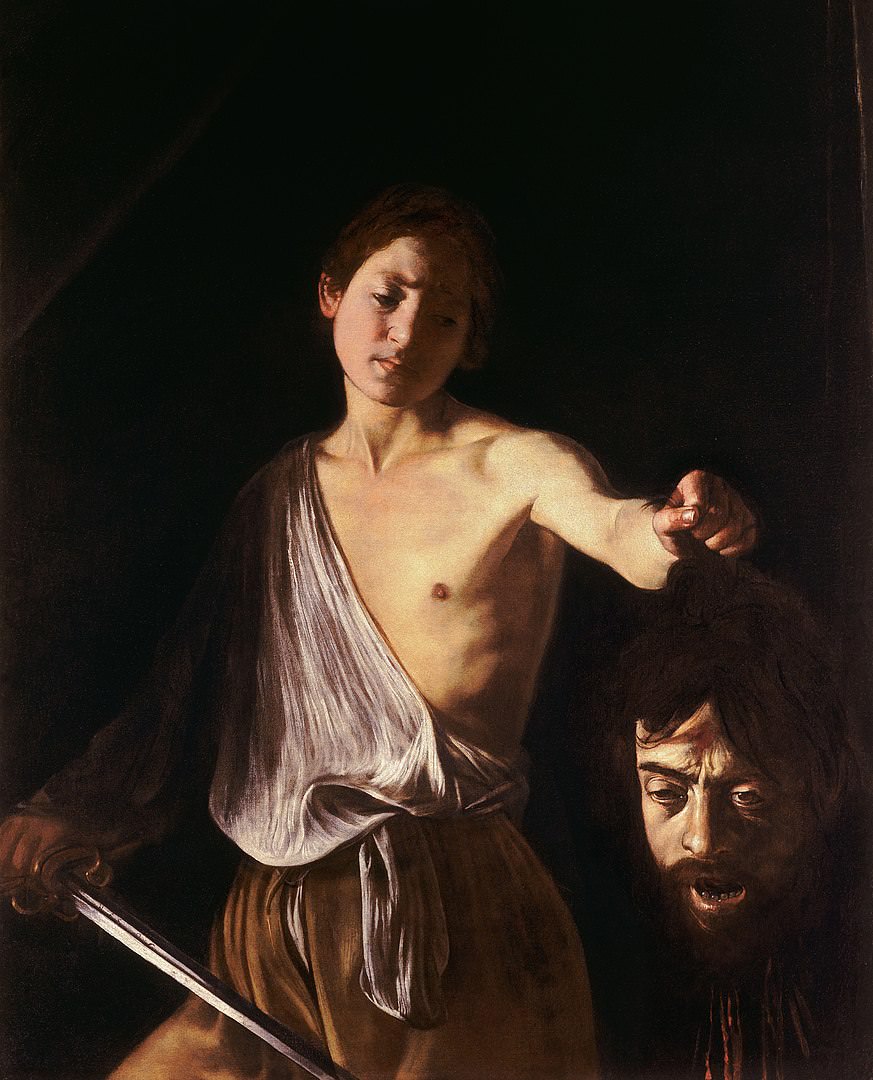 The artist was desperate to win back friends, presumably to take some of the considerable heat out of his life, and painted Salome with the Head of John the Baptist, showing his own head on a platter. He sent this work to the grand master of The Knights of St John, Alof de Wignacourt, in an attempt to win favour with his old patron.

He was also keen to secure a pardon for the murder of Ranuccio Tomassoni and through his association with the pope's nephew, Cardinal Scipione Borghese and his powerful Roman friends, it would seem that the pardon was about to be granted.

Travelling by boat destined for Rome and his papal pardon Caravaggio made a stop en route at Palo. What happened next is a matter of conjecture. It may be that the artist, nursing his wounds and weak with fever, succumbed to pneumonia. He died on 18th July 1610. He was 38 years old.