Painting Techniques of the Renaissance.
The Fresco technique.

Fresco painting has been around for a very long time, examples of fresco Painting Techniques date back to at least 1500 BC. But the use of the medium became very prominent in the medieval and renaissance periods. There are three main painting mediums that were used in the Renaissance, these are Fresco, (discussed here) Egg Tempera and Oil painting.

There are varying types of fresco, true fresco or Buon fresco is very permanent and consists of brush painting onto freshly applied, wet lime plaster (referred to as the intonaco.) Using water as the medium the paint is absorbed into the plaster as it dries and the pigment is bound into the structure of the plaster.

Wall painting was very popular in the renaissance era and fresco was the standard method of decoration.

The area to be painted was first covered with an underlayer of plaster named the arriccio. Often the artists would sketch their compositions on this underlayer in a red pigment called sinopia. The artist could not make changes in the composition of the painting and had only the drying time of the plaster in which to complete his work (about 8 or 9 hours).

Because of the drying time, only enough intonaco was applied for a single days work. If mistakes were made the entire day's layer of plaster would have to be removed.

The giornata is the name given to a single day's work and in fresco paintings, the dividing lines between differing days work can very often be seen. These seams between the layers of plaster were often hidden by an application of Secco fresco. 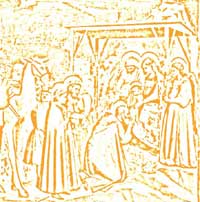 A layer of plaster arriccio with a preparatory drawing of red
pigment, the sinopia. 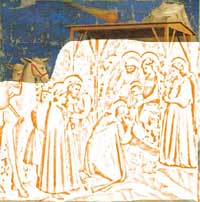 The artist then laid further plaster for a single days work, the intonaco. 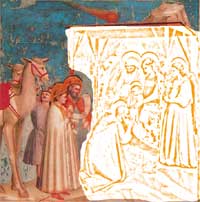 further painting was added each day. 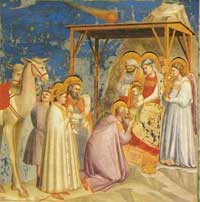 Finally the work was completed.

This is Giotto's Adoration of the Magi and the artist has used both the Buon and Secco techniques in this painting.


Secco fresco is used on dry plaster, the pigment is applied using egg or size as the medium and also as a binder for the paint. In the secco fresco technique, the paint is not
absorbed into the structure of the plaster but forms a surface layer which tends to flake off and is therefore not so permanent as Buon fresco. Secco fresco is often used in conjunction with the buon method, secco is faster and allows for mistakes to be corrected.

The third type of fresco, mezzo-fresco, common at the end of the sixteenth century, was an intonaco that was painted when the surface was almost dry. The pigment only slightly penetrates the surface of the plaster retaining much of the colour that varied considerably when painting into wet plaster.

Artists of the Renaissance worked in slightly different ways when working in fresco. Typically the artist would work from a top corner of the painting and gradually apply the paint from top to bottom, working a stage each day until completion. This method avoided damaging or splattering finished sections with paint.

Instead of using the red pigment sinopia for the underpainting many artists used preparatory drawings on paper. The drawings would be held against the wall and the main lines pricked through, a bag of soot would be banged along the holes producing dots giving the outline of the work.

Given that fresco painting did not allow mistakes to be easily rectified, the drawings became important in producing a coherent composition for the finished work.

Many of the worlds greatest cycles of paintings have been completed using fresco painting techniques and they include the example above from the Scrovegni Chapel.

Michelangelo's work in the Sistine Chapel is a fine (and very famous) example of the type of result that can be achieved with the medium, executed by a master craftsman at the height of his powers.