Giorgione.
of the Venetian High Renaissance.

The Venetian painter Giorgione was born in 1475/8 although his exact birthdate is not known. His birthplace was the town of Castelfranco Veneto, just outside of Venice. Very little is known about this artist and no more than six paintings have been entirely attributed to him.

He served his apprenticeship in the workshop of Giovanni Bellini and met Titian who was also apprenticed to Bellini.

Most of the information that we have about his life comes from the writings of the art historian Giorgio Vasari. Vasari had a tendency to embellish his accounts of the artist’s lives in his biographies.

Given that he was writing years after the fact, his waxing lyrical about the artist's gentle manner, excellent lute playing and fine singing voice may have been given more weight by Vasari’s exuberant style of writing 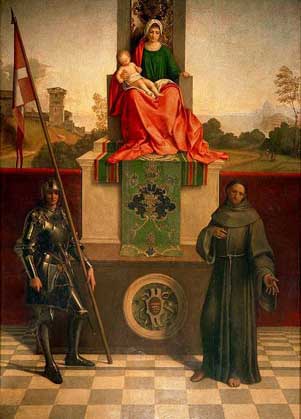 Giorgione introduced a style of painting that emphasised light and colour rather than the Florentine tradition of the shapes of objects and figures. Rather than relying on preliminary drawings, Giorgione adjusted his composition directly on the work surface.

This method allowed his paintings to evolve guided by his brushwork alone.

What is clear is that Giorgione did acquire a reputation for surpassing the work of Gentile and Giovanni Bellini, he did admire and learn from Leonardo’s work (as suggested by Vasari). Venetian painting had evolved, it now included new visions, with the landscape as subject matter in its own right.

One of the works definitely attributed to him is the "Madonna and Saints" of 1503.

This is a very calm composition, painted with very little drawing, note the contrast of the warm red robe against the Madonna's cool green dress.

The artist painted The Old Woman over 500 years ago and yet this image of an old woman could be from any era, a universal portrayal of old age. The scroll reads; “with time” (“col tempo”) what a painting this is!

The artist was a distinguished and charming person and also a great lover of music (Vasari). He was also becoming recognised for his painting abilities in or around 1502 when he was about twenty-five years old.

His painting "The Tempest" was reputed to be the first landscape of Western painting and was completed in 1508. 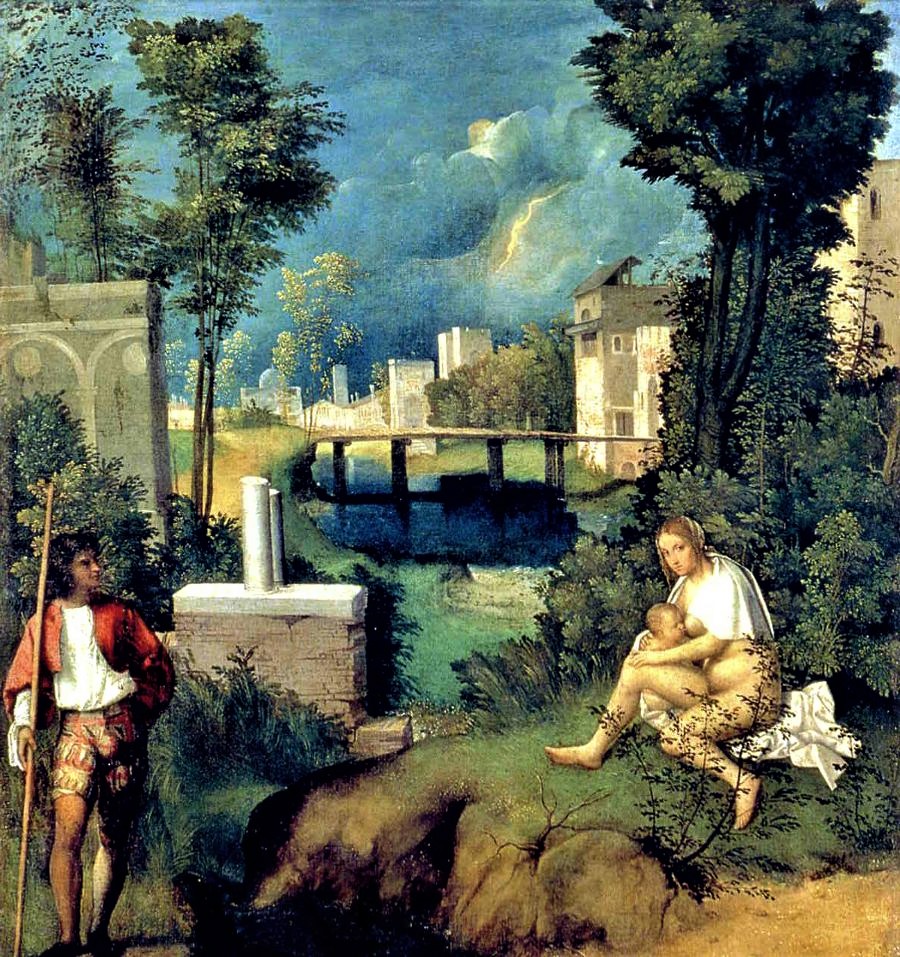 Giorgione’s paintings can be notoriously difficult to interpret. In the case of the Tempest, one theory suggests that the figure of the man separated from the naked woman by a deep gorge symbolises the natural chasm between men and women.

The buildings in the background indicate that this divide can only be bridged by culture and indeed the landscape features an actual bridge that spans the watery barrier between the male and female figures of the painting. 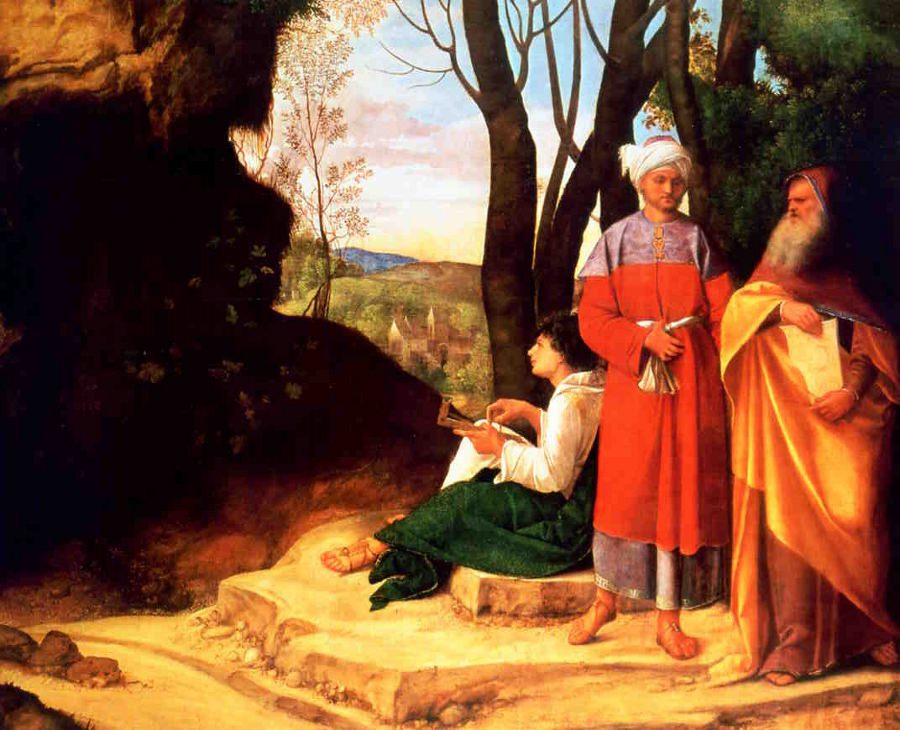 Once again the landscape is a prominent feature of the artist's work.

The Three Philosophers features three individuals of different generations. The young man seated caries a pair of compasses, the middle aged man wears a turban and Arab attire and the older man holds a scroll of paper.

Suggestions as to the identity of the three are many. Perhaps Virgil, Aristotle and Averroes, or perhaps the old man is Plato! The three could also represent the Magi from the Biblical story of the three kings who follow the star leading to Bethlehem.

"The Concert Champêtre" (or Pastoral Concert) is a prime example of the difficulty in the attribution of his work. This painting has been attributed to both Giorgione and later Titian. 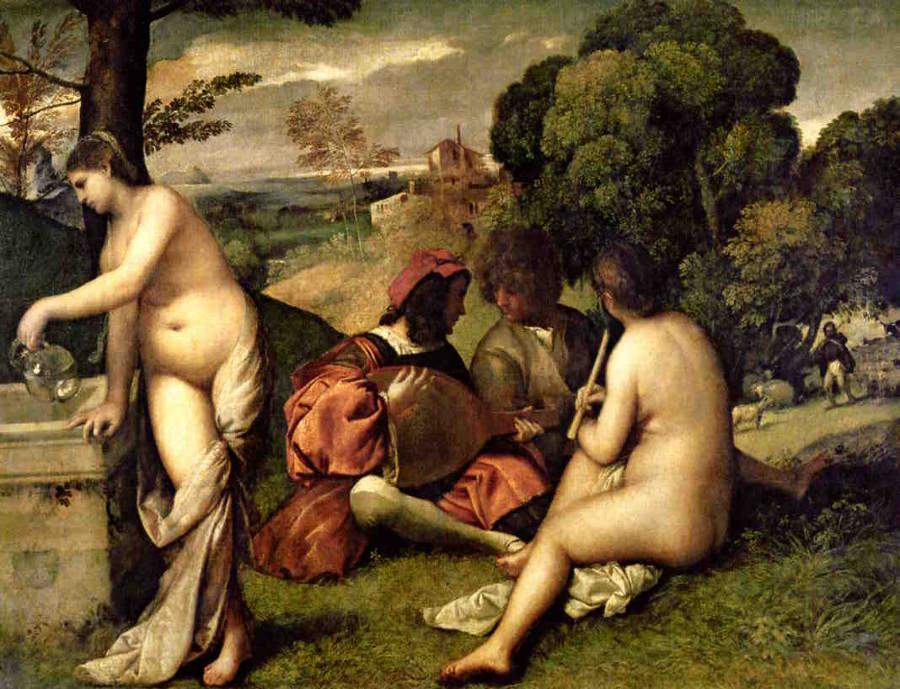 The Concert Champêtre features two seated musicians engaged in conversation. They seem unaware of the presence of two nude female figures. The seated female is holding a flute while her companion stands to pour water into a trough. 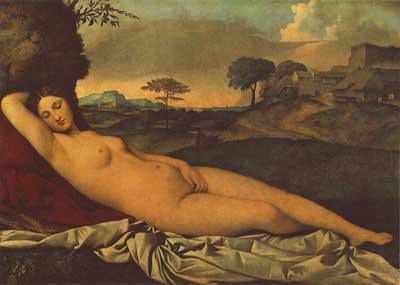 The idyllic peaceful scene is set in a serene landscape so typical of Giorgione’s style. A shepherd in the background is also playing the flute completing the musical harmonious theme of the painting.

It is clear that Titian did have a hand in finishing some of Giorgione's paintings after his premature death in 1510. The "Sleeping Venus" was almost certainly completed by Titian and the pose was copied by him in one of his later paintings.

The great artist died, probably of the plague, in 1510 but his art conveyed a feeling of light and air with his trees, figures, and clouds set within nature. His landscapes are part of the whole composition and not just there to support his human subjects, and this had a lasting influence on future generations of artists. 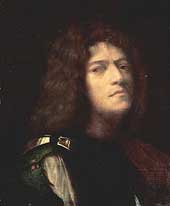 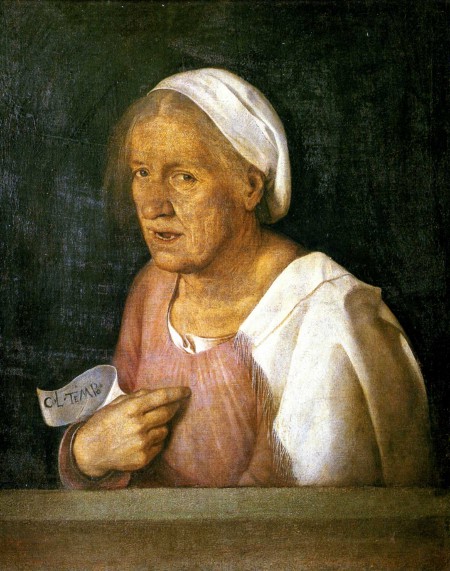