Rogier Van der Weyden.
Painter from the Court of Burgundy.

Rogier van der Weyden was born in 1399 in the Belgium city of Tournai under the name Rogier de le Pasture. He studied in the workshop of Robert Campin and was a greatly influential Northern artist.

He visited Rome in 1450 but was not influenced by Italian art his style remained pure Netherlandish.

Rogier married the daughter of a Brussels shoemaker. He and his wife, Elisabeth, produced four children and the family moved to Brussels in 1435. It was in the Dutch-speaking town of Brussels that Rogier began using the Dutch translation of his name Rogier van der Weyden.

This was the generation after Van Eyck who Rogier eventually succeeded in popularity.

In Van der Weyden's St Luke painting the Virgin he uses virtually the same setting as Van Eyck's Madonna of Chancellor Rodin with the triple window looking out onto an enclosed garden with a river dividing an urban scene. 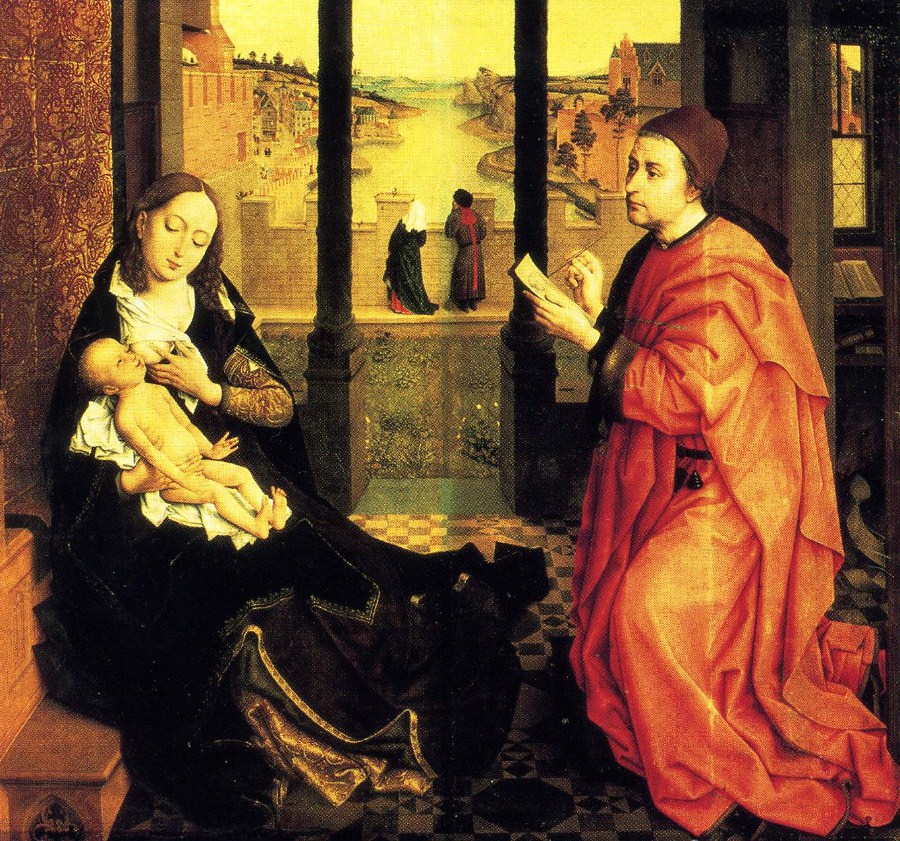 It is fascinating that an artist, Van der Weyden, in his ‘St Luke painting the Virgin’ has depicted St Luke as an artist! St Luke is concentrating on his painting of the Virgin who is preoccupied with feeding her rather stiff looking Christ Child.

The Descent from the Cross. 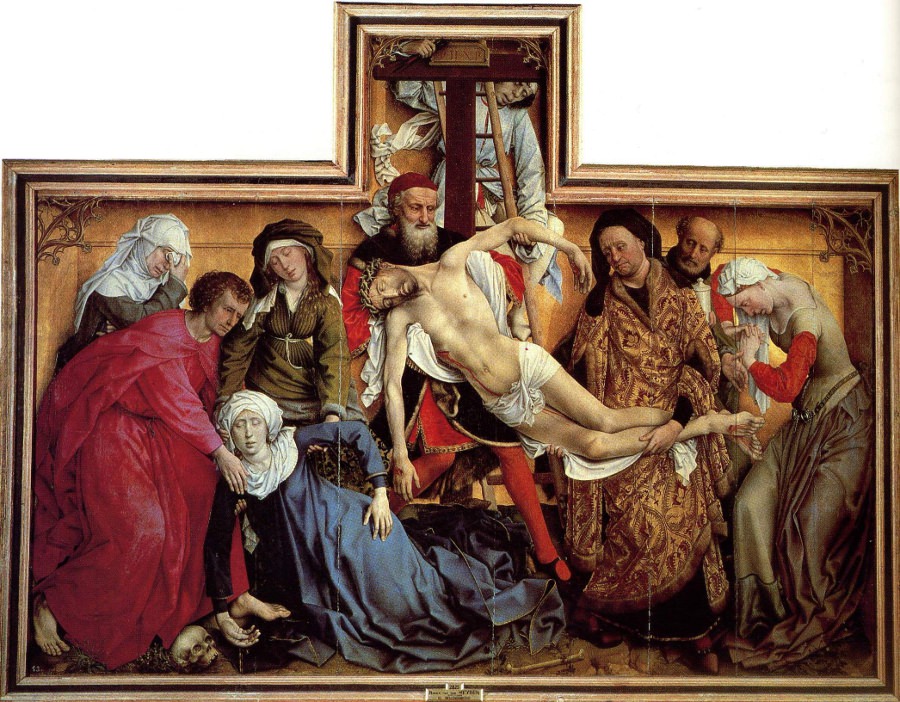 The Descent from the Cross is Van der Weyden's most famous work. It is compressed into a frame that only just contains it. Also, the depth within the painting is very shallow and is contained by a wall in the background, this gives the figures greater prominence and highlights the extreme expressive sadness that the artist has woven into the work.

The figures interlock with the body of Christ mirroring that of the swooning Virgin adding a diagonal dimension to the composition. The anguish of Mary Magdalene is clear as she bows her head and wrings her hands in desperation.

Her anguish is cleverly balanced by the bent body of John as he supports the Virgin at the opposite end of the painting.

Above the figure of John is the weeping image of one of the other Marys who holds her hand to her face consumed by grief.

The artist is rightly famous for his renditions of human suffering expressed by the characters in his paintings. This work is a fine example of his style. 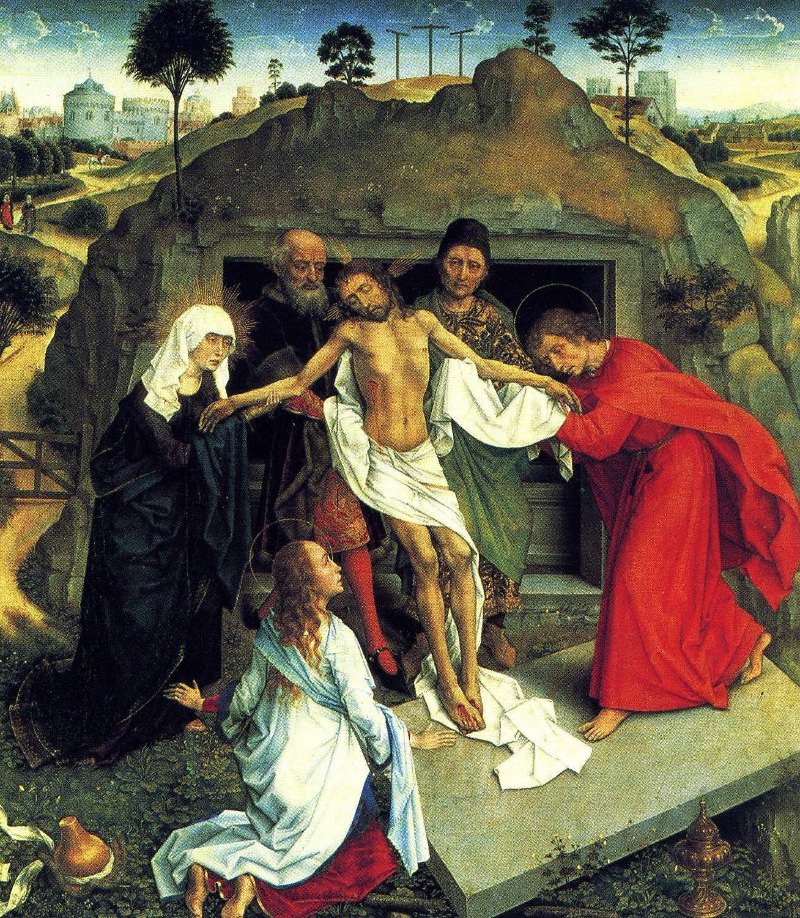 It is possible that the Entombment was commissioned by the Medici. The work is adapted from a design by Fra Angelico

It is typical of the Netherlandish style with meticulous details. Van der Weyden’s figure painting is incredibly impressive.

The lifeless body of Christ is carried by four bearers to his tomb. Christ’s arms are outstretched mirroring his crucifixion, his feet rest on a stone slab in readiness to seal the entrance to his burial chamber.

The tomb itself is set in a rather unconvincing landscape which would appear to be less important to the artist than his figure paintings.

The Hôtel-Dieu in the town of Beaune in eastern France is the location of Rogier van der Weyden's altarpiece depicting the day of judgement for all of humanity.

Van der Weyden’s interpretation of the Last Judgement is one of the most impressive versions of northern European painting of this popular subject. Once again Rogier’s fine painting of the human figure is displayed in magnificent splendour. 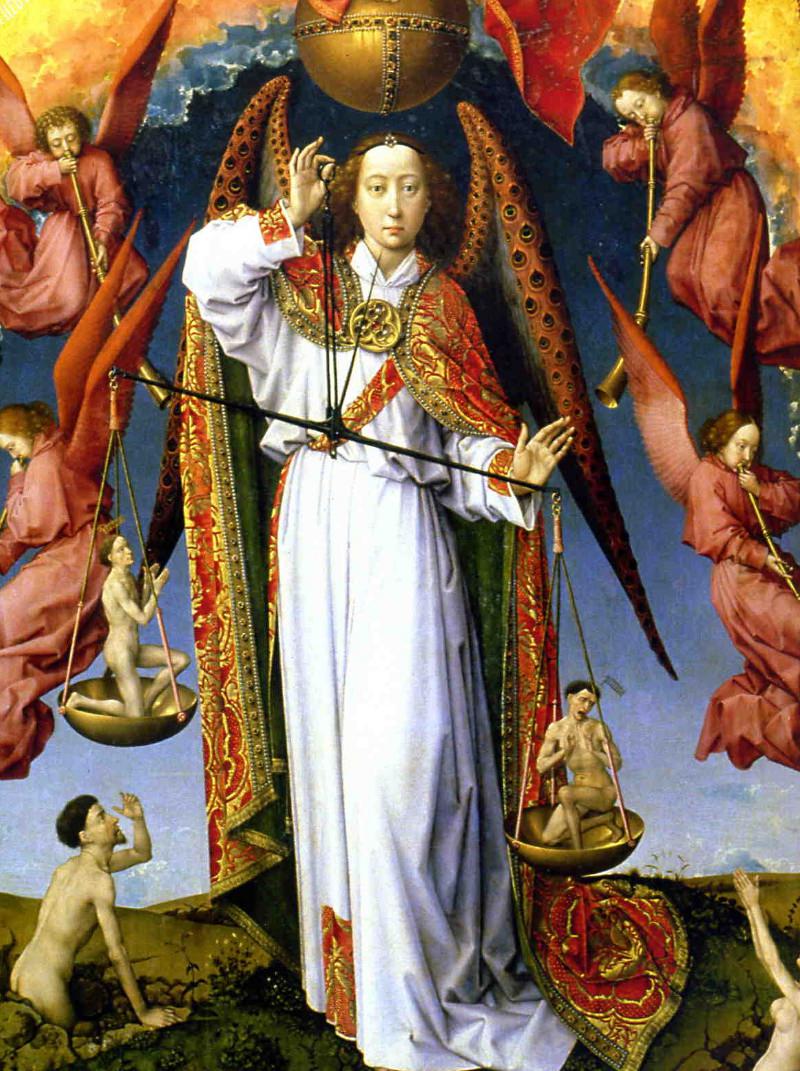 The centre of the altarpiece is filled superbly by St Michael who holds the scales of judgement deciding who will be saved and who will be damned. He is surrounded by trumpeting angels. 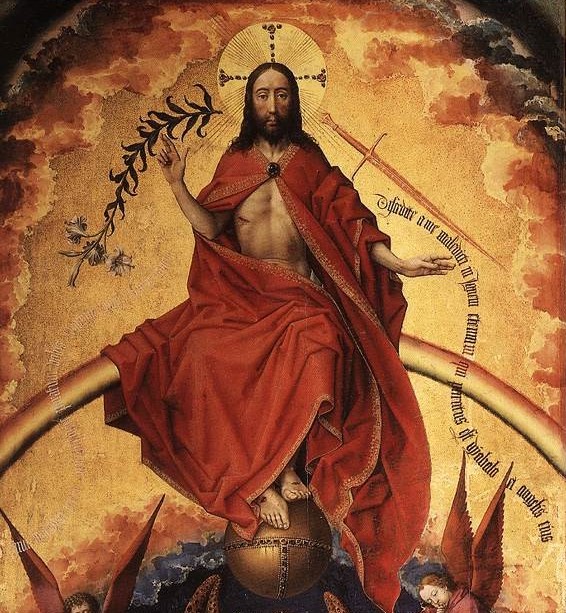 Above Michael, Christ is seated on a rainbow his arm raised in blessing. 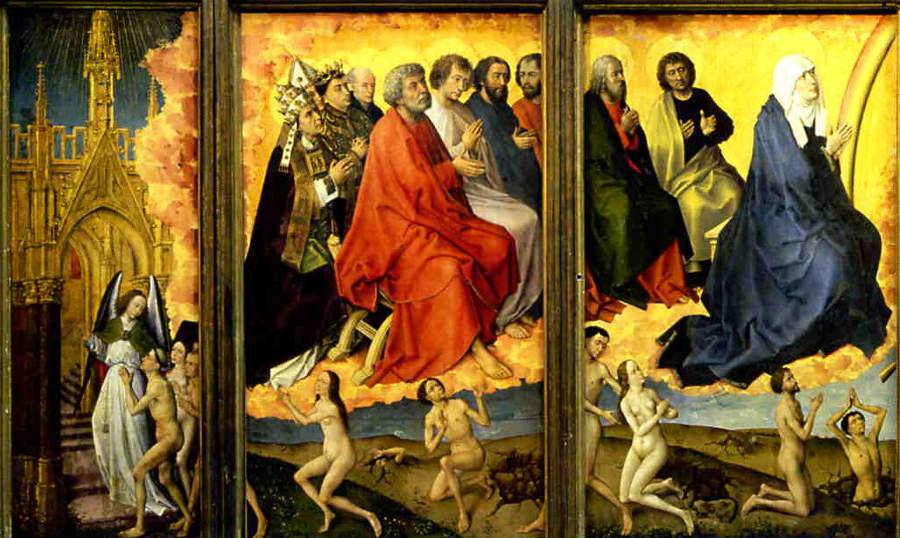 The left-wing of The Last Judgement. (s)

On the left panel is The Virgin Mary, and St Peter who is clad in a red robe. Six of the apostles form a semi-circle, a king and a pope are among several figures adorned with haloes.

On the far left an angel guiders the saved through the gates of heaven. 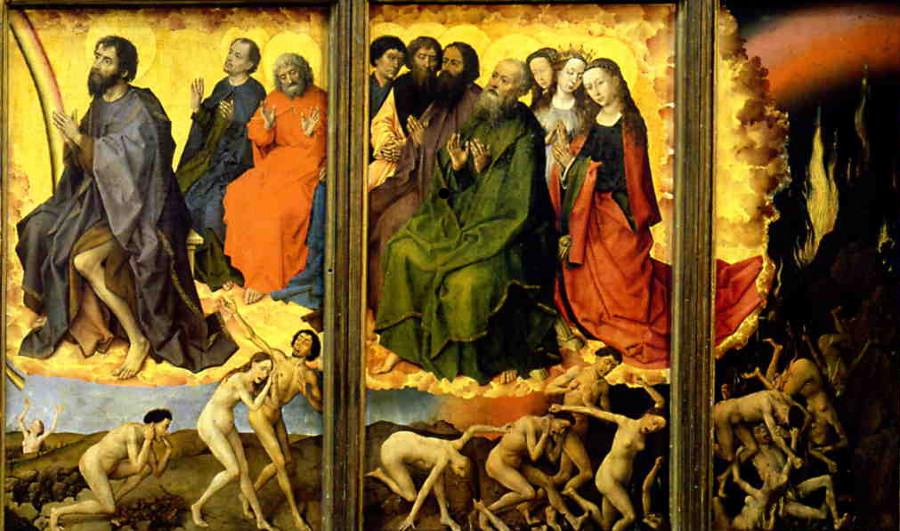 The right-wing of The Last Judgement. (s)

The right panel features St John the Baptist with St Paul, dressed in green. The six apostles mirror their counterparts on the left panel. Behind Paul are three standing women while on the far right the damned are ushered into hell.

Smaller figures of naked humanity appear throughout the altarpiece. They range from the rejoicing saved on the left to the helpless damned led into the abyss on the right. 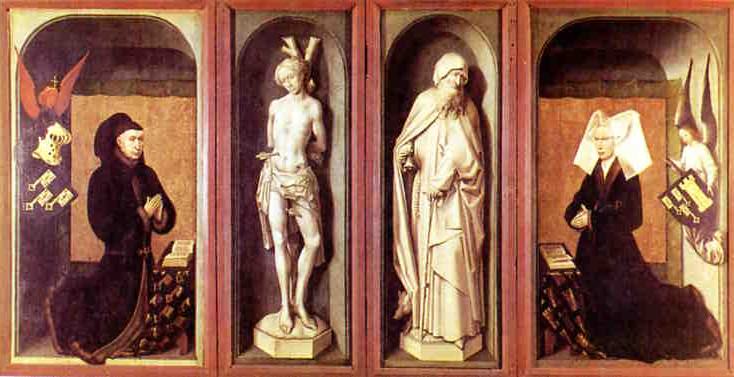 A view of the folded altarpiece features the superbly painted statues of Saints Sebastian and Anthony. On each side of these are the portraits of Nicolas Rodin and his wife who are the patrons of the work. 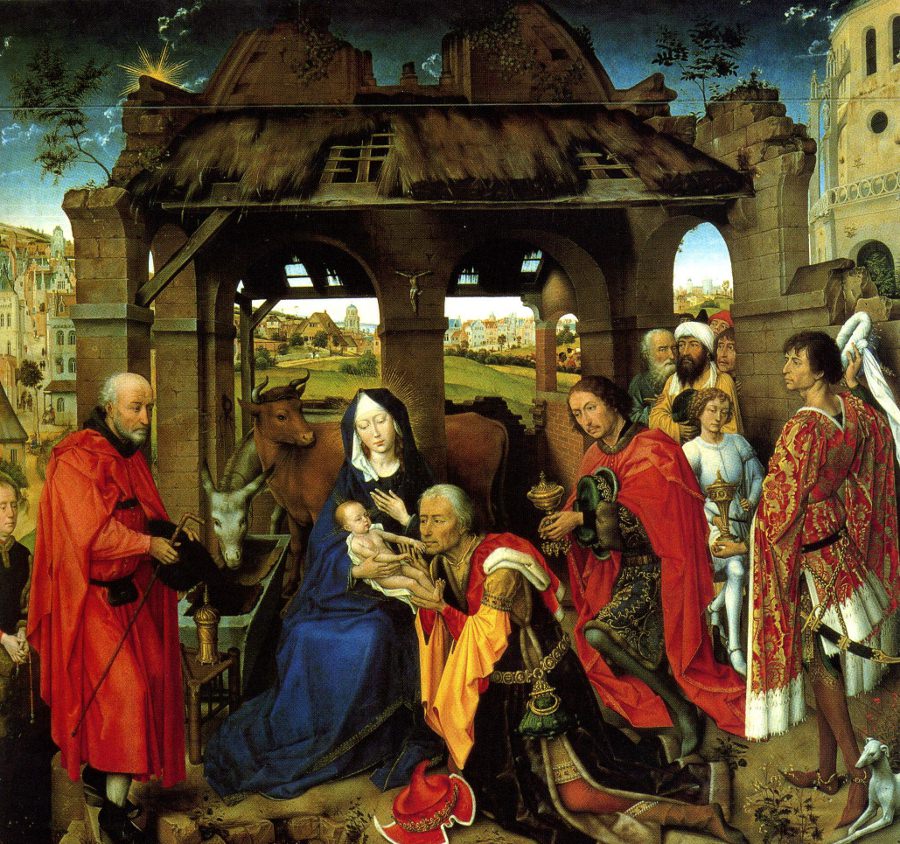 This is the centre panel of the Saint Columba Triptych which is an Adoration of the Magi. The kings are dressed in luxurious clothing with the Holy Family placed in front of the stable.

The stable block displays a type of grand architecture with solid columns and arches. A picture of nobility and generosity permeates the scene which is completed by the sweeping landscape adding depth to the work. 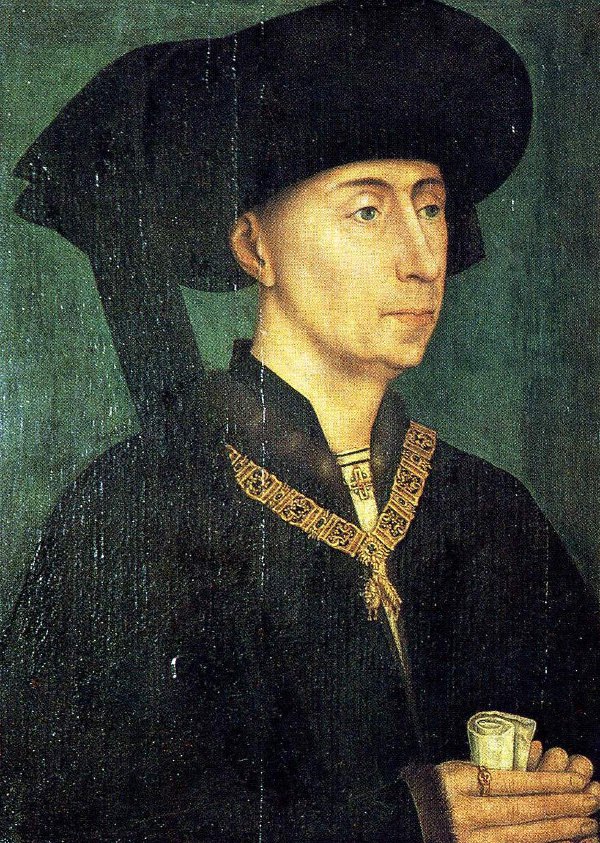 Van der Weyden died on June 8th 1464. He was internationally famous in his lifetime and wielded a huge influence over his contemporaries and future generations of Flemish artists.