Jacopo Tintoretto.
The last great artist of the Italian Renaissance.

Was Jacopo Tintoretto (real name Jacopo Robusti) a Mannerist painter or the last great artist of the Italian Renaissance?

Tintoretto had a style that was all his own and did not seek to paint simply in the 'manner' of the previous generation of artists, so yes, he was the last of the great painters of the Italian Renaissance.

Born on September 29th, 1518 Jacopo was one of twenty-one children. His father was a silk dyer by trade and the family was based in Venice. The young Jacopo was trained for a short period by Titian and was a great admirer of Michelangelo, copying his drawings.

It is even possible that he met Michelangelo on a visit to Rome in 1545.

He tried to synthesise the drawings of Michelangelo and the colouring of his old master Titian. However, his use of dark tones illuminated by gleams of light was a precursor to the Baroque style that became prevalent after the Renaissance and Mannerist periods.

In 1550 Jacopo married Faustina de Vescovi and she appears to have produced two sons and five daughters. Two of the sons Domenico and Marco, and also his daughter Marietta all assisted him in his studio.

In or around 1548 Tintoretto was commissioned to paint four pictures in the Scuola di S Marco. Among these was the celebrated Miracle of the Slave.

The other works are, The Finding the body of St Mark, The Saint's body brought to Venice, and Votary of the Saint delivered by invoking him from an Unclean Spirit.

These works were well received and greatly enhanced the artist's fame. 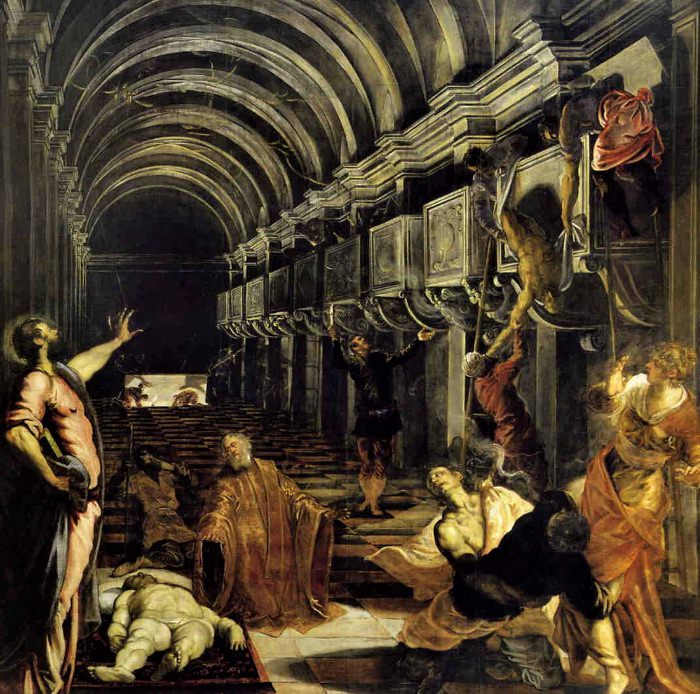 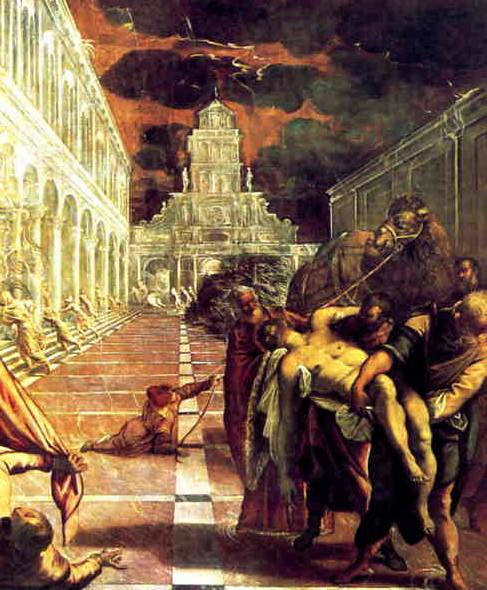 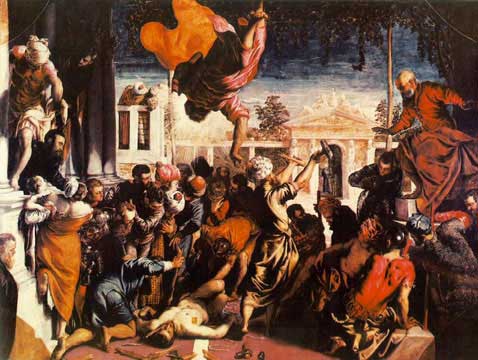 The miracle of the slave.

St Mark, the patron saint of Venice, floats above the crowd and renders a slave who is about to be martyred invulnerable. 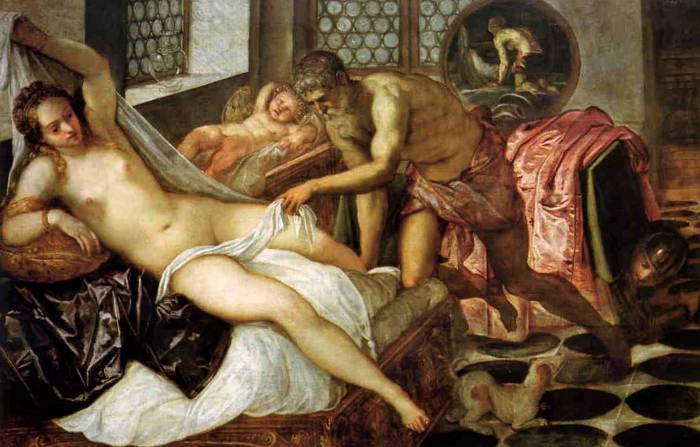 Many of Tintoretto’s paintings rely on diagonals to form the structure of the compositions. This can emphasise the drama within the painting and is a device that Tintoretto used to great effect.

His magnificent Venus, Vulcan, and Mars is a fine example of the artist’s technique. The reclining figure of Venus is placed diagonally from the top left of the painting dramatically flowing down to the right-centre of the canvas.

Vulcan stoops in a parallel position to Venus. The cupid figure rests in a cradle that runs in the opposite diagonal direction mirroring the line of the floor.

The artistic device employed by Tintoretto emphasises the drama of the scene. Adding a circular mirror to the rear wall adds depth to the painting.

In 1564 the artist began his association with the Scuola di San Rocco, where he worked for over twenty years and decorated the building with more than sixty vast canvases. His theme was the life of the Virgin and the life of Christ.

These pictures are executed with tremendous freedom and include an enormous Crucifixion scene. Although Tintoretto was already recognised as a master painter his legacy is almost inevitably associated with this vast body of work.

The following six paintings are a small example of Tintoretto’s enormous body of work in the Scuola di San Rocco. They are a narrative of the passion of Christ beginning with his arrest, his crucifixion, and ending with his ascent into heaven. 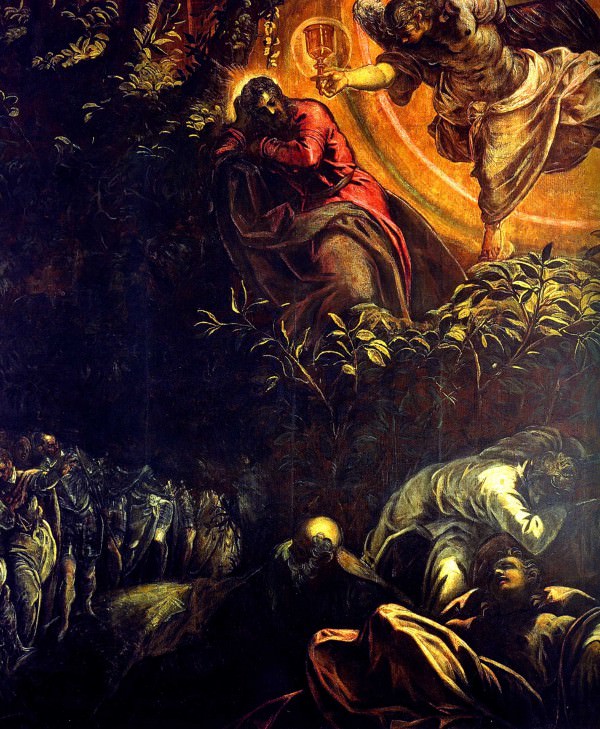 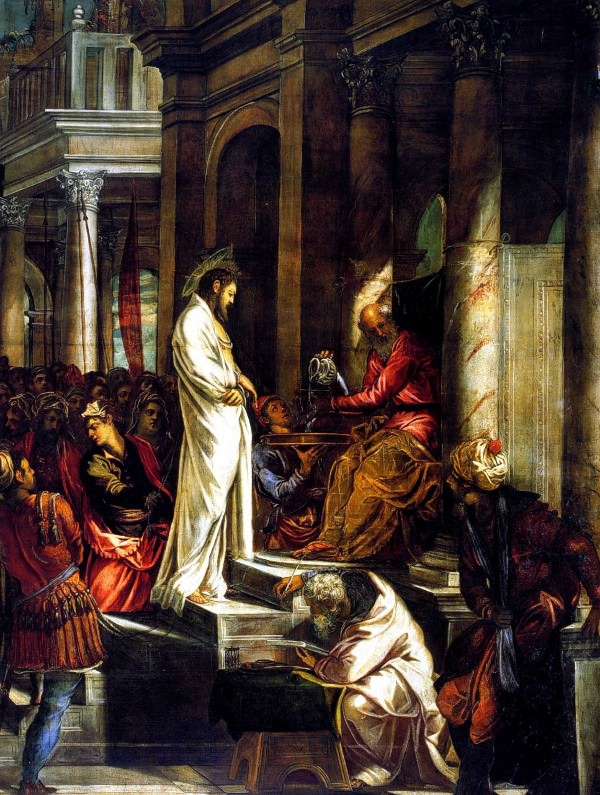 The narrative begins with the arrest of Christ as he prays in the Garden of Gethsemane. He is then brought to judgement before Pontius Pilate where he is condemned to death. 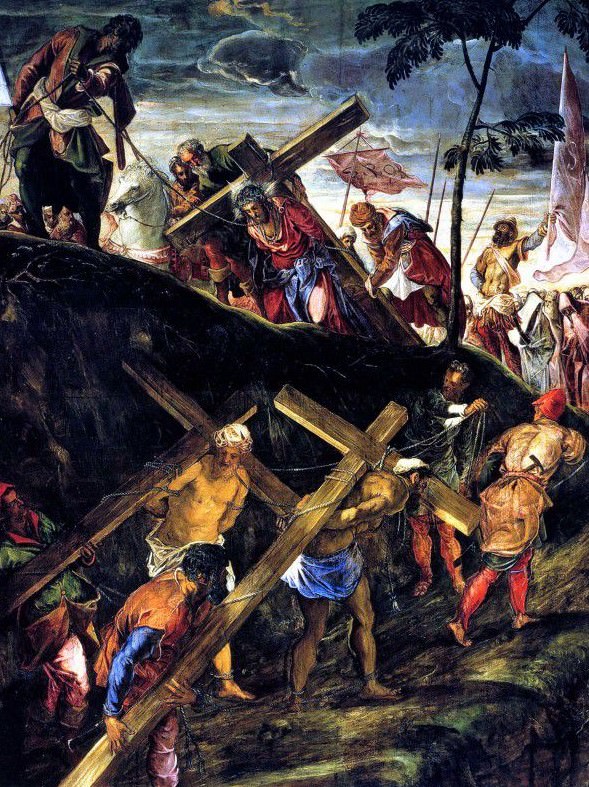 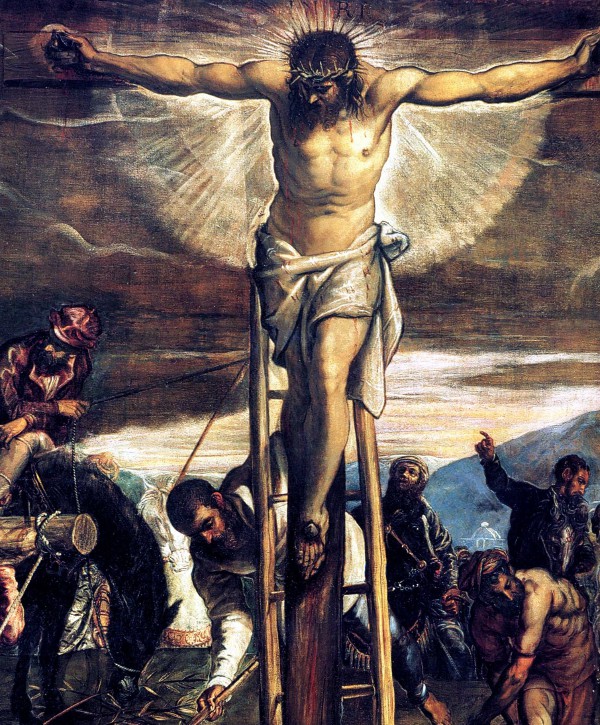 The ascent to Calvary is where Christ is forced to carry the cross of his crucifixion. Christ is crucified and suffers a horrific death. 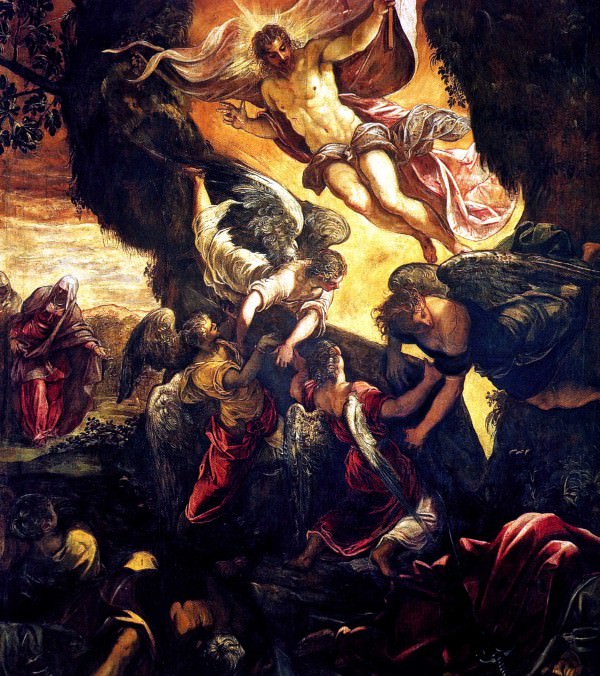 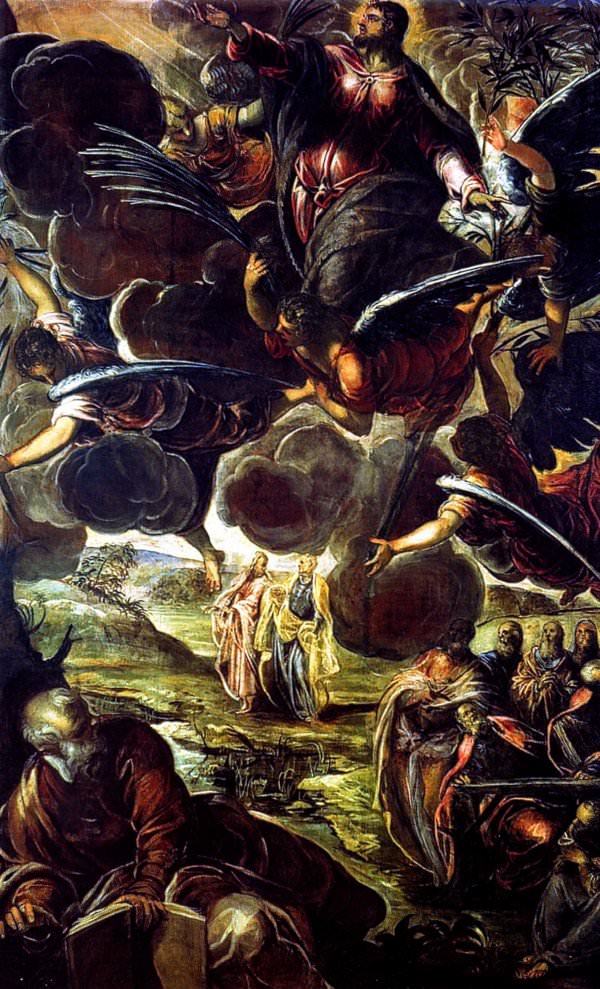 Christ is miraculously resurrected and ascends into the heavens.

The Crucifixion of Christ. (w)

If you are visiting Venice this church is a must-see I can say, from my own experience, that the scale of the paintings presented in this magnificent building leaves an indelible mark on the memory. Tintoretto was known for his speed when executing his paintings and his somewhat sketchy but brilliant efforts are abundant in the Scuola di San Rocco.

The versatile artist also painted numerous works for the ducal palace but many of these have been lost in the great fire of 1577. The last major work of the artist's life is the huge "Paradise".

This painting is a colossal 74 ft by 30 ft, and the artist was assisted by his son Domenico and painted many of the heads and drapery from nature.

Tintoretto died on May 31st 1594. He had suffered from severe stomach pains and fever and is buried in the church of the Madonna dell ‘Orto by the side of his daughter Marietta. 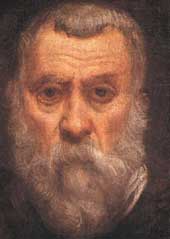