Jan Van Eyck is the Flemish painter often credited as the first master, or even the inventor of oil painting. That he was an early master of the oil painting medium is certainly true. It is certainly untrue that he invented the technique.

In fact painting with oil dates as far back as the Indian and Chinese painters of the fifth century however Van Eyck was one of the earliest masters of the technique.

His use of oil paints in his detailed panel paintings, typical of the Netherlandish style, resulted in him being known as the father of oil painting.

Van Eyck's date of birth is unclear, c.1395 or sometime before this date is widely accepted as the best guess. Almost nothing is known of his early life but we do know that he entered the service of Philip the good, Duke of Burgundy in 1425.

The artist was held in high esteem by the Duke who was godfather to his son. Philip also paid a salary to Van Eyck, this was very unusual as most artists of the period relied on individual commissions for their livelihoods.

When the artist's salary became the subject of a dispute, Philip wrote to his treasurers stating,  'we could find no other artist to our liking who is so accomplished in his art and science', a measure of the artists value to the Duke. 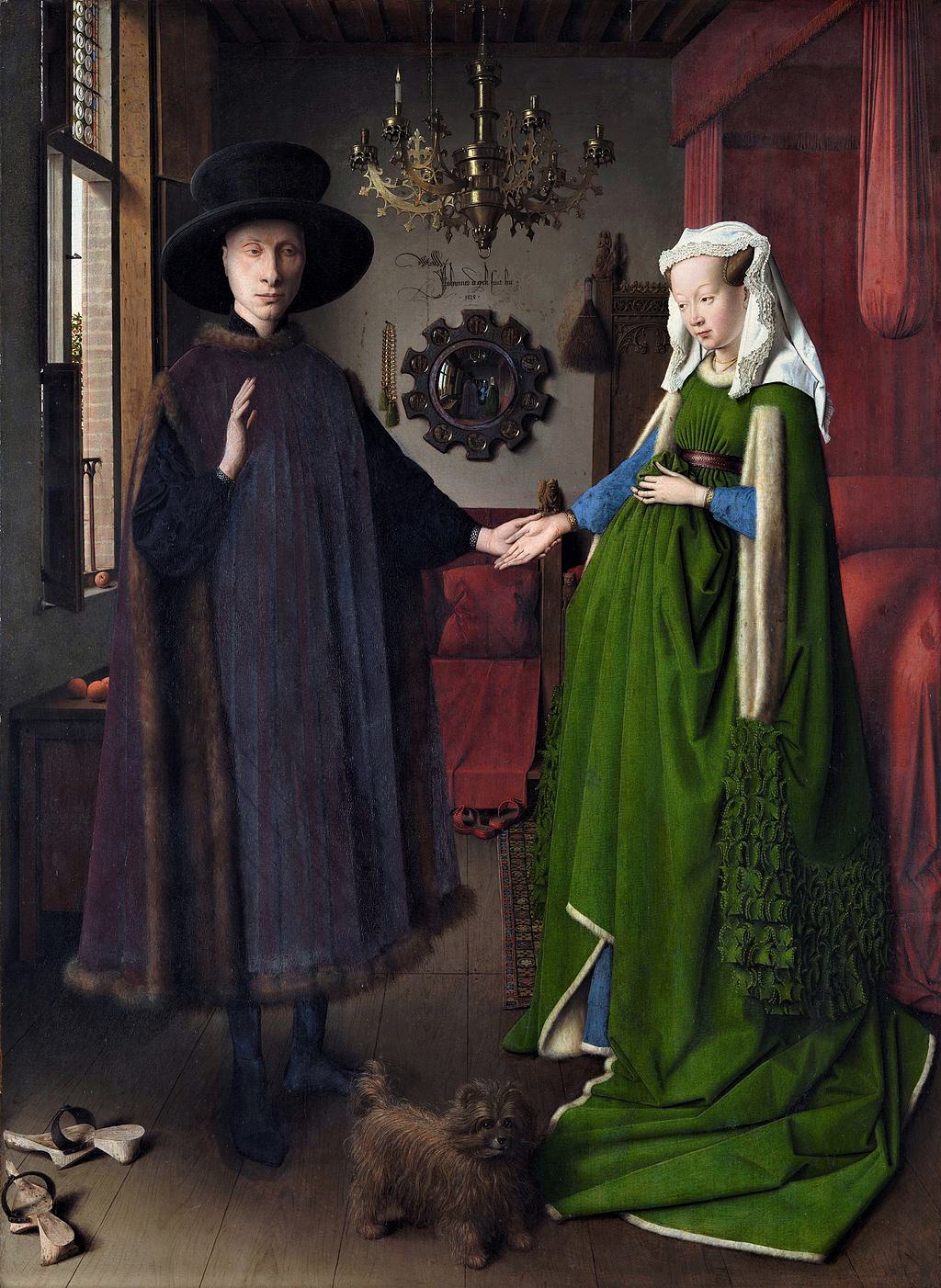 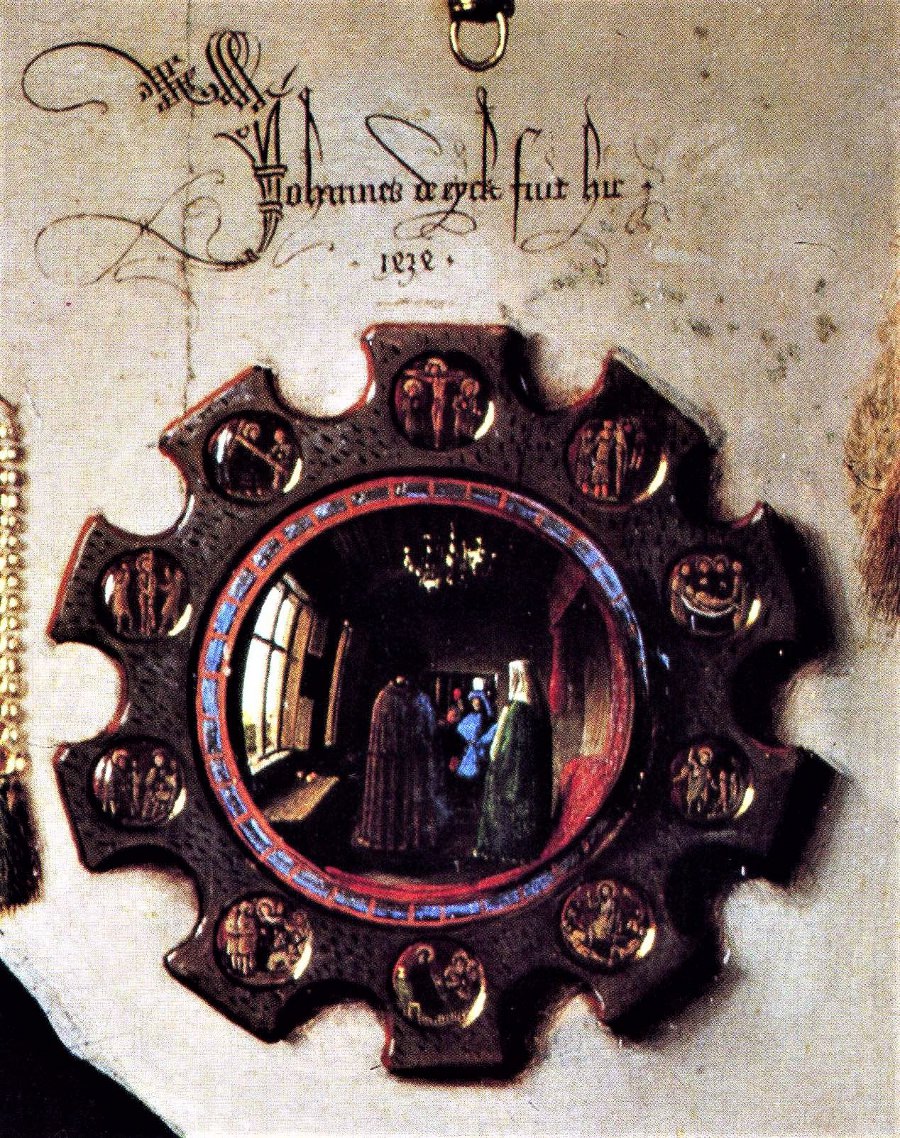 This detail of the convex mirror on the wall in the background of the painting shows the backs of the betrothed and also two more people. The ten small circles surrounding the mirror each contain a tiny scene from the passion of Christ. It is a fine piece of the miniaturist technique and quite brilliant in its execution.

An early example of graffiti, or simply an elaborate signature by a fine artist?

This panel painting is famed for being one of the first to be executed in oils rather than in the standard tempera method of the period. The detail and the use of light to evoke the interior of the room was considered remarkable and revolutionary for its time.

The sitter is possibly Giovanni Arnolfini and his pregnant wife. Giovanni was an Italian merchant resident in Bruges and the painting represents a betrothal in the bedroom of their home with beautifully observed details such as the chandelier and convex mirror. 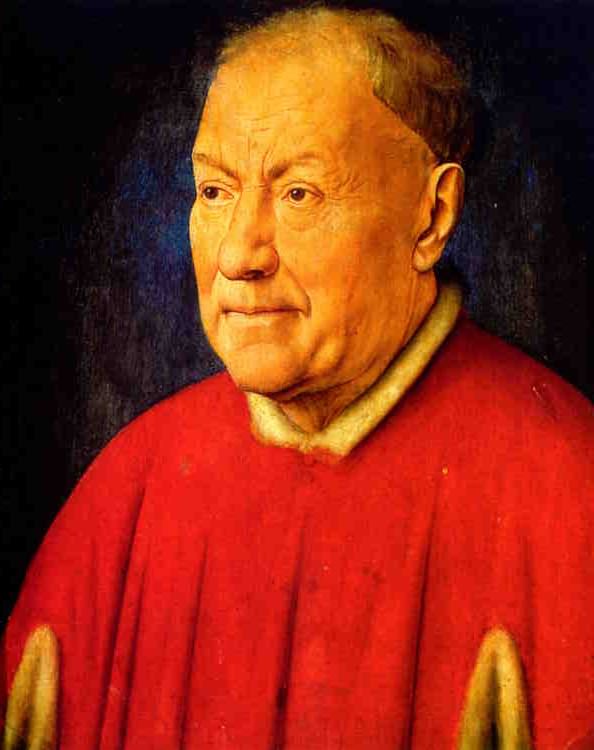 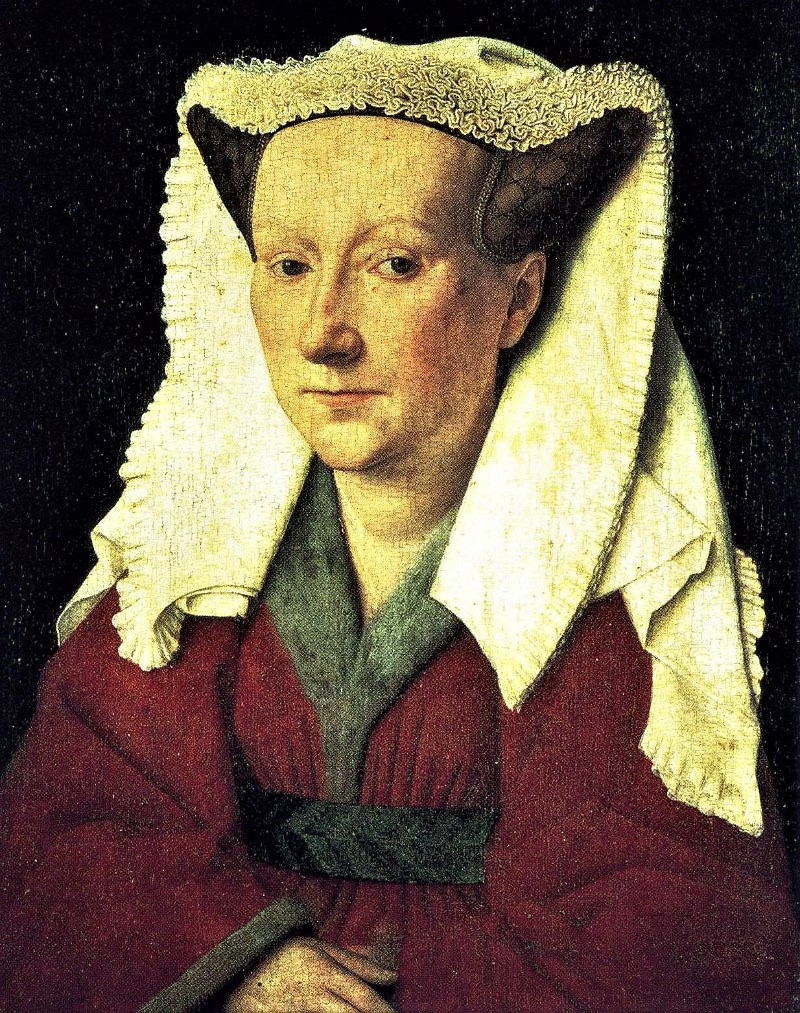 The Virgin and Child with Chancellor Rolin. 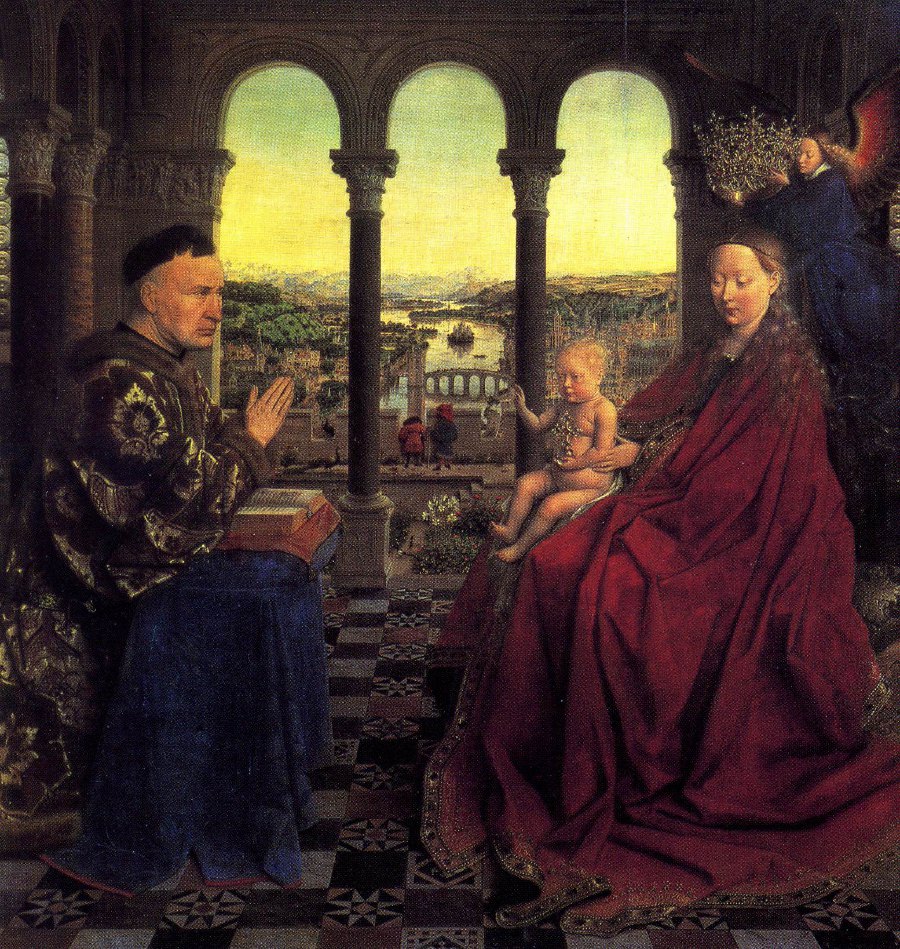 Rolin was an administrator and the chief servant of the Duke. He is shown kneeling opposite the Virgin who sits with her Child on her knee. An angel holds a crown above her head and the figures are placed in a space enclosed by Romanesque arcading.

The view through the back of the arcade reveals a minutely painted landscape executed with the detail typical of Flemish painting. 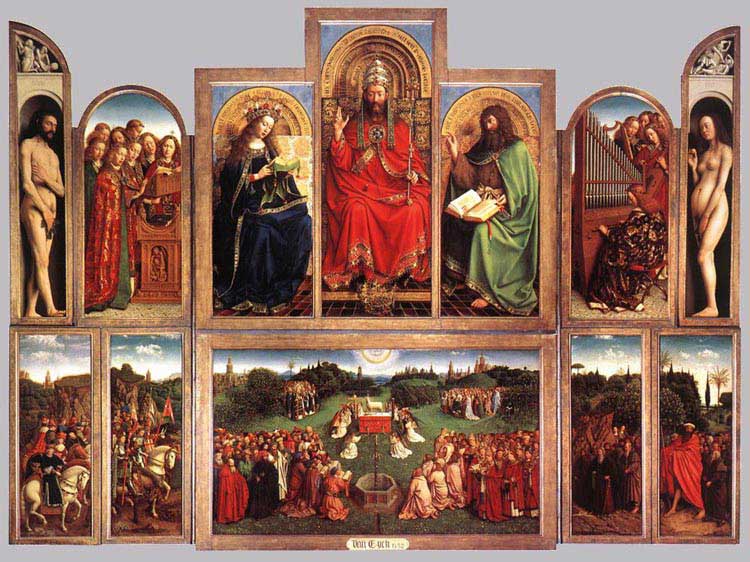 The Altarpiece contains a multitude of figures and scenes. In the fully opened state, these include Adam and Eve, the Virgin Mary, God the Father, John the Baptist, and the Adoration of the Mystic Lamb. Various Saints, Angels, and musicians are also featured.

Although Herbert is the lesser-known of the two brothers his work on the Ghent Altarpiece is probably far more extensive that is usually assumed. Herbert is known to have travelled to Italy while Jan was closer to the court of Burgundy in the Netherlands.

Herbert’s fame at the time of the Ghent Altarpiece can be explained by the inscription on the frame: Herbert van Eyck, “the greatest painter that ever lived.”

The Polyptych has become the subject of much discussion about which of the two brothers’ work was the more extensive. The scientific debate continues to rage. 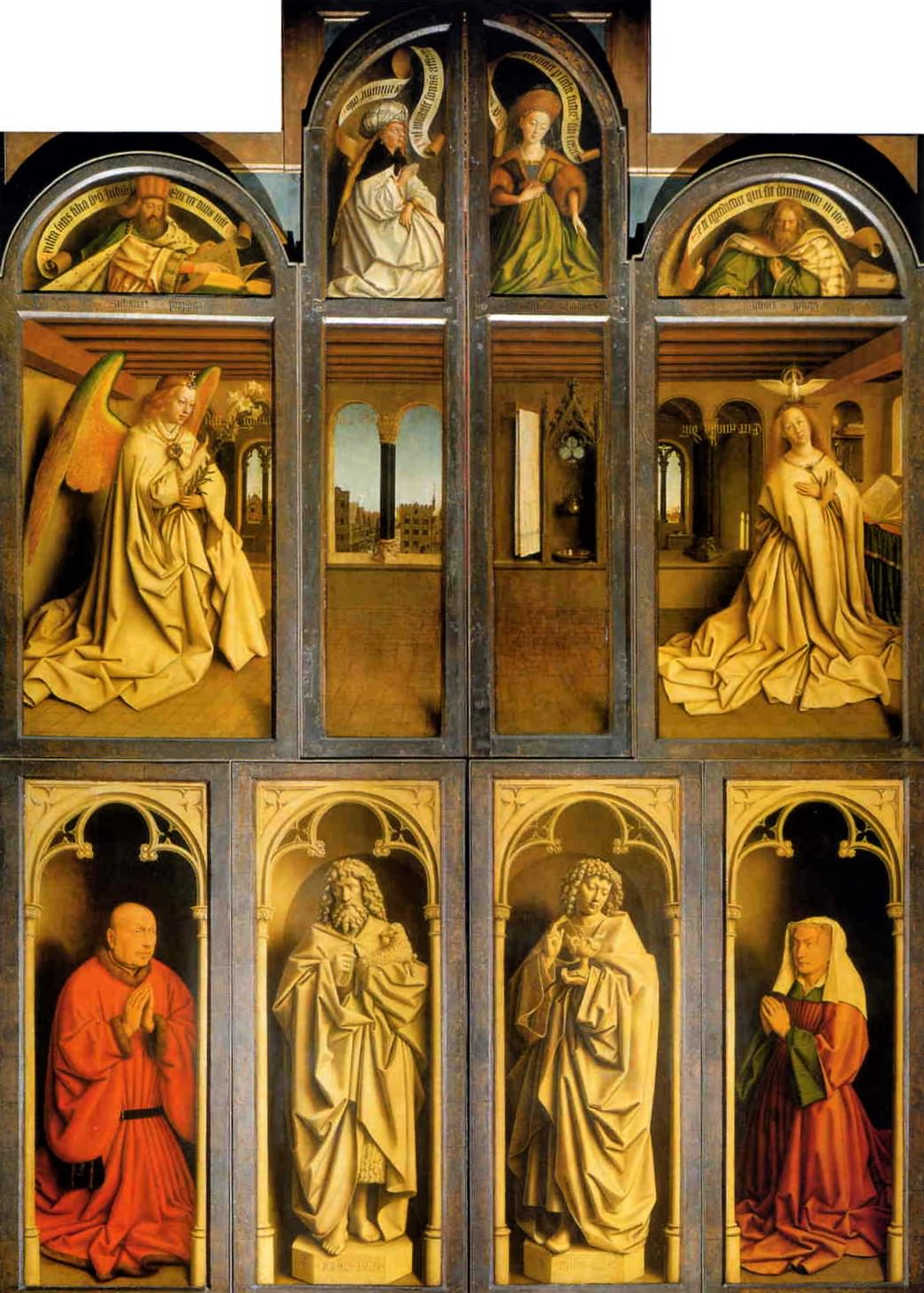 The closed panel contains from the top, Prophets and Sibyls, the Annunciation, and portraits of the donor Jodocus Vijd with his wife Elisabeth Borluut. The panel would be in the closed state on weekdays but fully opened on Sundays and special holidays.

All of the known works of Jan Van Eyck are from the period within his service to Philip of Burgundy. He was a learned man who spoke Latin, he was also well versed in the classics.

The artist remained as well respected member of the court of Burgundy until his death in 1441. 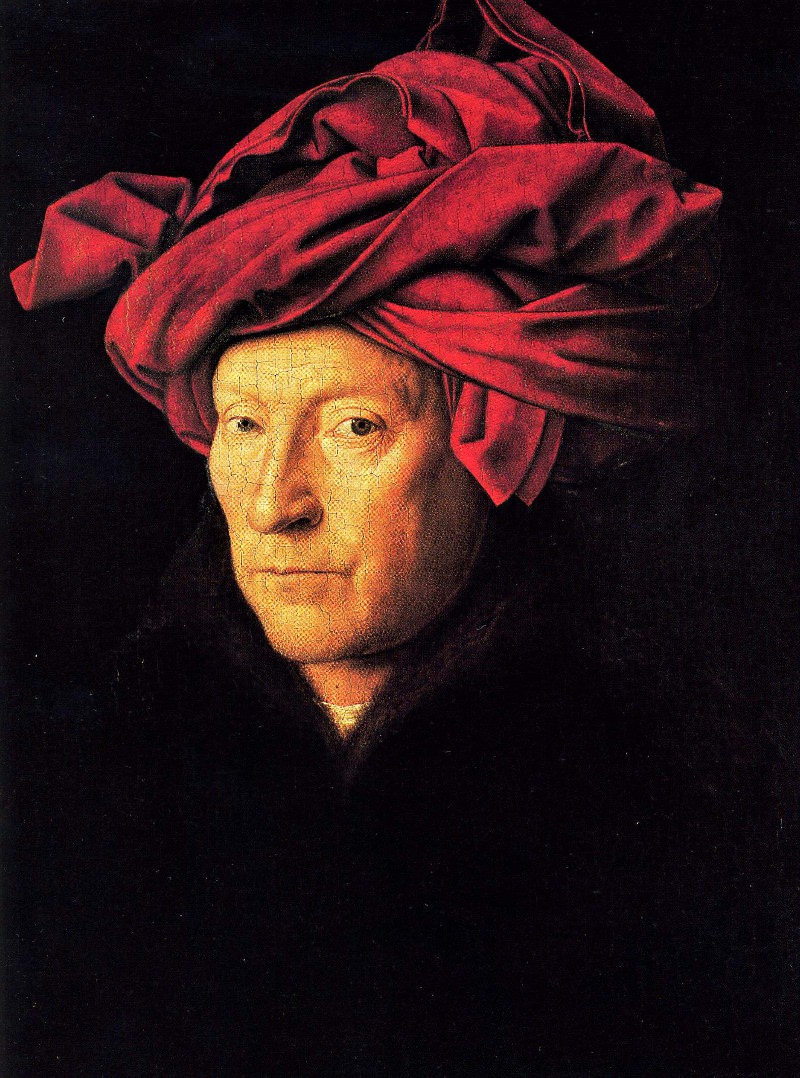 Man in a Red Turban. 1433 National Gallery London. (s) Often regarded as a self-portrait of the artist.
FacebookTwitterPinterestTumblrRedditWhatsApp