Fra Filippo Lippi was born in 1406 in Florence, both of his parents died when he was a child. Filippo was put into the Carmelite monastery in Florence in 1421 by his aunt, who had taken over the care of the youngster but wanted him off her hands.

Lippi became yet another great Florentine painter and produced many memorable renaissance artworks.

It seems very likely that he was a pupil of Masaccio, he is recorded as a painter in 1430 a period when Masaccio was painting the Brancacci Chapel.

Lippi was one of the first Italian artists to be influenced by Flemish painting. It is not known if he visited Flanders or if he had first-hand knowledge of the many paintings that had been imported into Italy.

The next dated work is the Tarquinia Madonna of 1437. 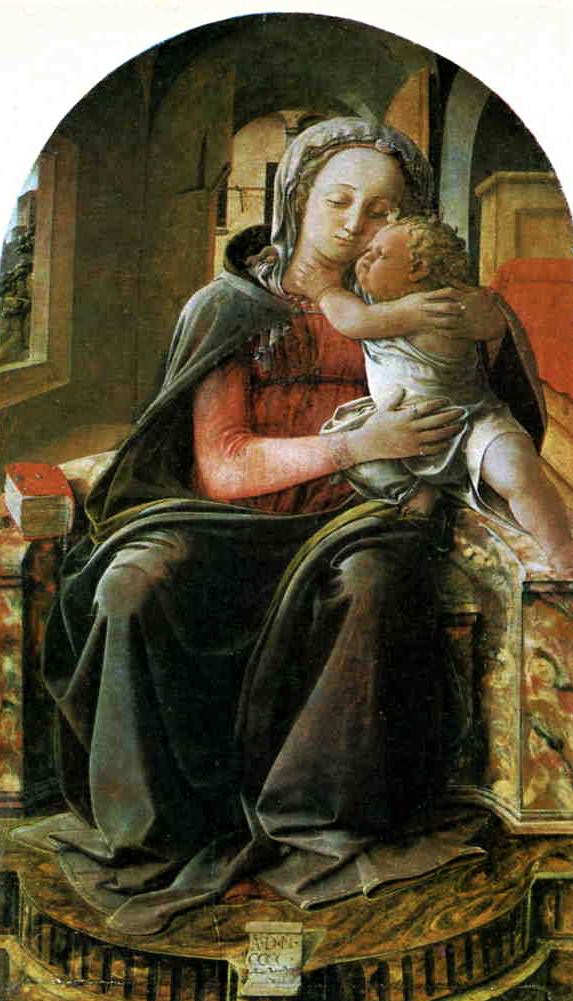 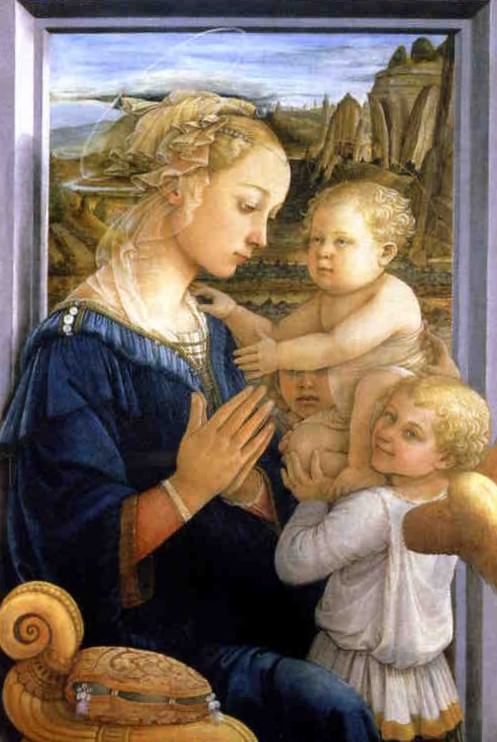 Commissioned by Giovanni Vitelleschi, archbishop of Florence for his native city of Tarquinia, this painting is inspired by Masaccio with its large volumes. The rather fat, and quite ugly, child also show a trend towards Donatello's work. 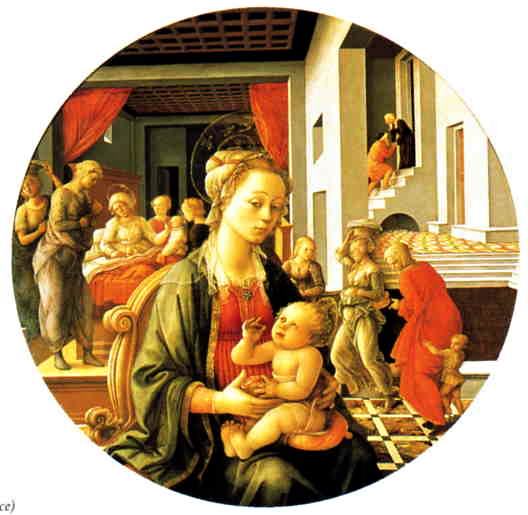 Lippi’s early Madonna’s although accomplished appear to lack the charm of his later work. This is evident when comparing the Tarquinia Madonna of 1437 with his Madonna and Child with two Angels from 1465.

Filippo’s Tarquinia Madonna owes much to the influence of his master Masaccio, while his later Madonna and Child with two Angels are reminiscent of Filippo’s pupil Sandro Botticelli.

In 1452 Filippo was appointed chaplain of a convent in Florence, and it is recorded that he lived in abject poverty. He began work on a series of frescoes for the choir of Prato Cathedral and also met Lucrezia Buti, a lady placed under the guardianship of the local nuns.

Filippo asked permission to paint Lucrezia and the result was a romance that resulted in the birth of their son, Filippino, in 1457/58.

Filippino Lippi followed in his father's footsteps and also became a famous painter. 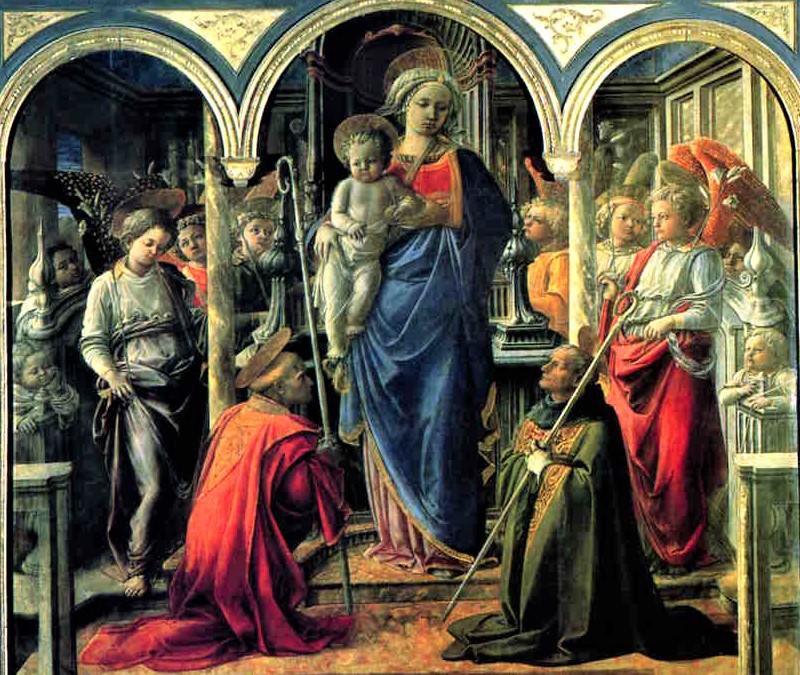 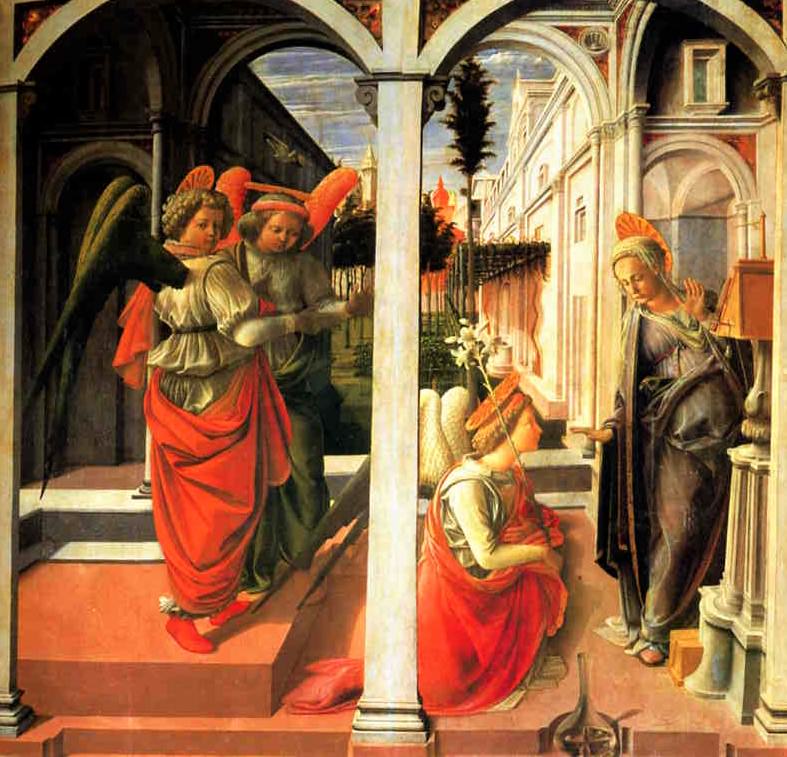 In the Annunciation, painted for a chapel in the church of San Lorenzo, we are greeted with an elegant image of the Virgin as she reacts to the visiting archangel’s message. The buildings recede sweeping into a background of trees and marble architecture.

Filippo’s excellent use of colour is wonderfully illustrated with the fiery red robes set against a cool white and grey buildings.

The frescoes of stories from St Stephen and St John the Baptist are considered to be among Fra Filippo Lippi's most important works.

These two cycles of frescoes, painted on opposing walls at Prato Cathedral, are balanced. The birth of the saints face each other, the mid-range mirrors their life work and their deaths are shown at the bottom.

Perhaps the most famous scene is the Feast of Herod, a gruesome story depicted as a Florentine dinner party with the guests witnessing a beautiful dancer who ultimately presents her master with a severed head! 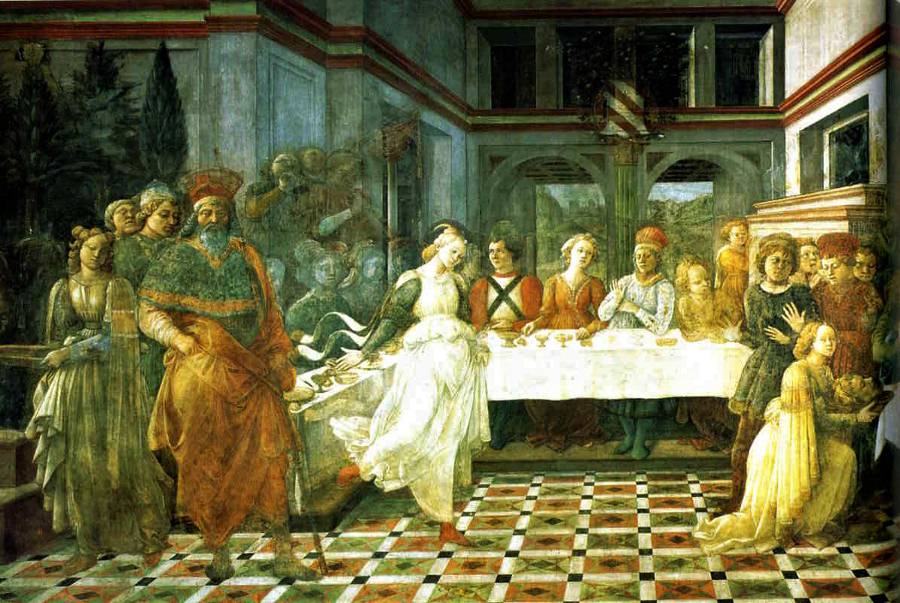 This fresco shows three episodes within the same painting. The beheading of John the Baptist, Salome entertaining the guests with her dancing, and Salome presenting the severed head to Herod. 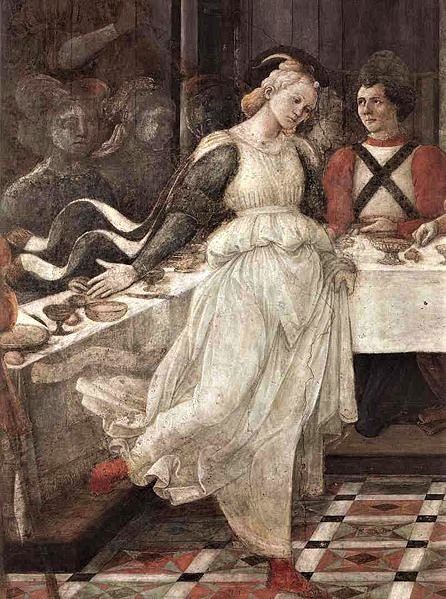 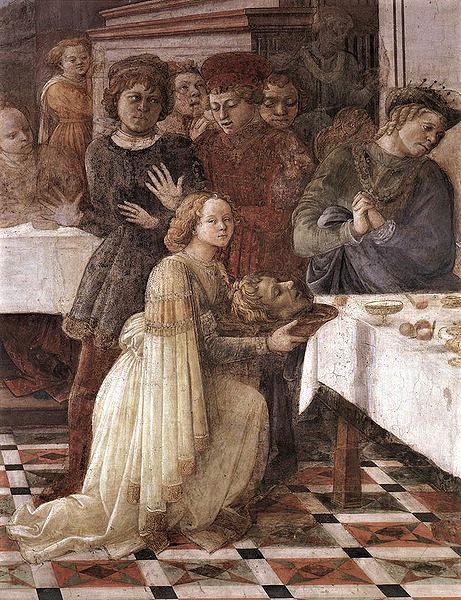 Salome Presenting the Head of John the Baptist. (detail) (w) 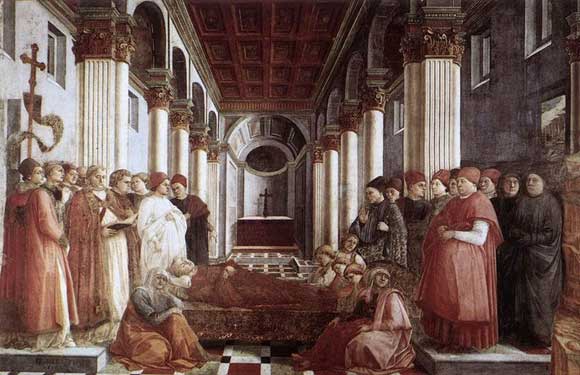 Stories from St Stephen and St John the Baptist. Prato Cathedral. (W) c.1460. Fresco Duomo, Prato. This is the funeral of St Stephen. 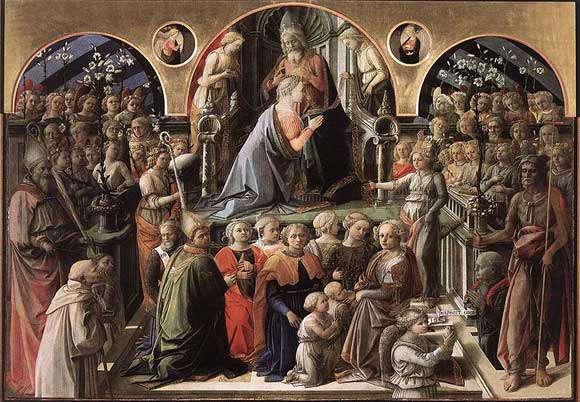 The Coronation of the Virgin of 1441 was painted for the Church of Saint Ambrogio, Florence. Now in the Uffizi Museum it shows the Virgin surrounded by saints, angels and monks.

The kneeling figure of a monk on the right is reputed to be a self-portrait of the artist.

Works in the Cathedral of Spoleto. 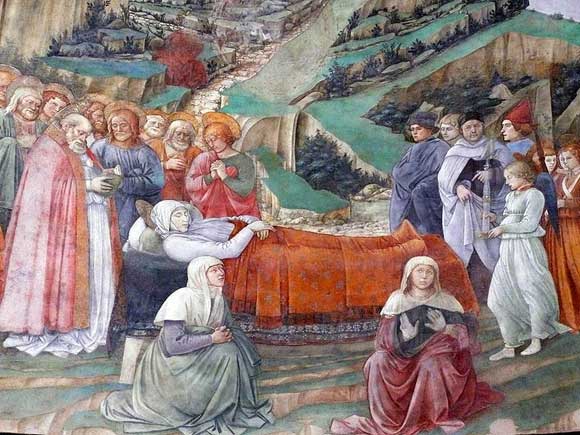 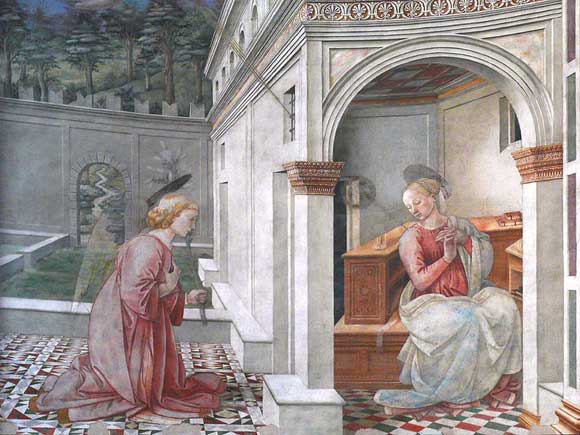 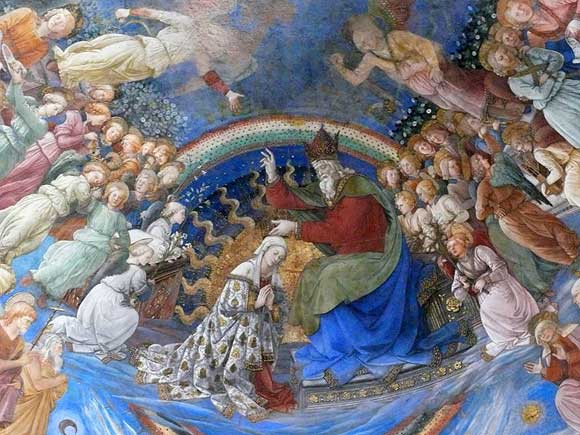 Annunciation. Duomo di Spoleto, Scenes of the Life of the Virgin (w)

This is just one of Fra Filippo Lippi's Annunciations, a theme that he was to paint several times. 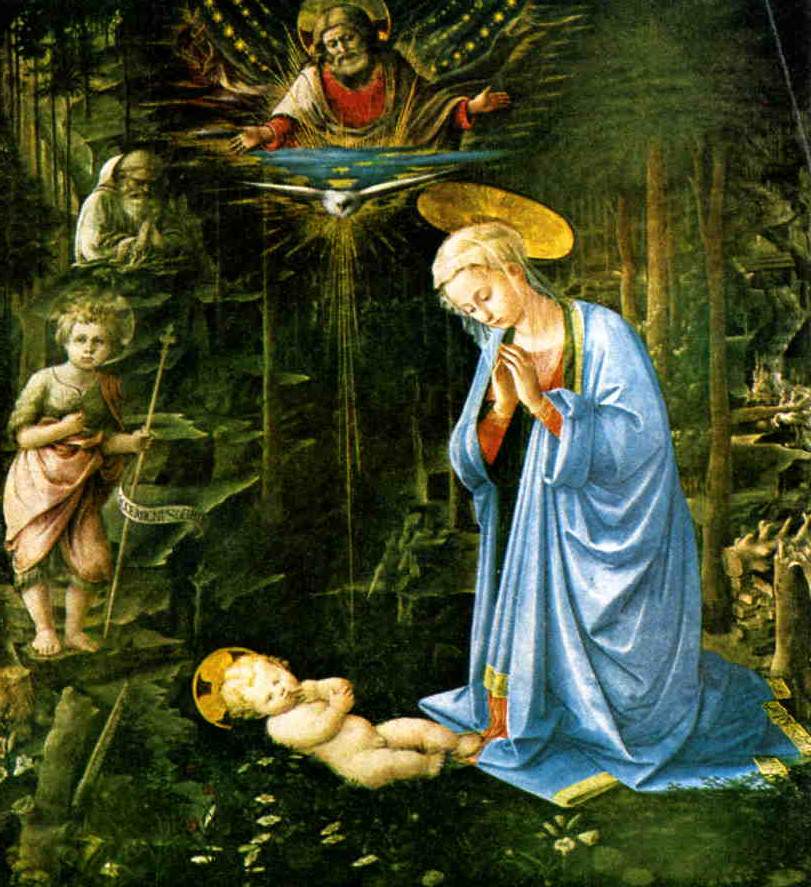 This wonderful painting with its dark wooded background is one of my favourite works by Filippo.

The Virgin kneels in prayer over her infant. The Christ Child lies on a bed of leaves that cover the forest floor. Both the child and his mother have golden haloes signifying their divinity.

John the Baptist-shown here as an older child-stands on a rocky path. He is dressed in a red robe and holds the staff that is common in many paintings of him.

John has a banner which reads in translation, behold the Lamb of God. Above John, the praying figure of St Romauld pays homage to the scene of the Nativity.

At the top centre of the painting God the Father can be seen, hands outreached in blessing, below him a dove signifying the Holy Spirit completes the trinity. Lippi’s vision of the Nativity contains none of the usual elements, no ox, no ass, no angels, and no stable.

Filippo has signed his imaginative work on the handle of the axe which is embedded into a tree stump at the bottom left of the painting. 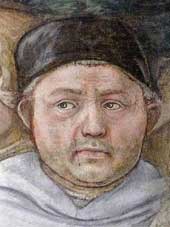