Many of Pieter Bruegel's paintings are familiar to us all. His winter scenes and depictions of peasant life have adorned the packaging of biscuit tins and chocolate boxes helping to market these products, particularly in the festive season. However, it should be recognised that Bruegel is considered the most important painter from the Netherlands  of the latter half of the sixteenth century.

He was born in the Dutch town of Breda in or around 1525 with the birth name of Brueghel, he later dropped the "h" from his name signing his works Bruegel.

He was the head of a painting dynasty which included his two sons, the artists, Pieter Brueghel the Younger and Jan Brueghel the Elder. Pieter the Younger, also had an artist son, Ambrosius, while Jan was a father to Jan the younger, who was also a painter (confusing isn't it?)

Bruegel was married to Mayken (the daughter of the Flemish artist Pieter Coecke van Aelst) it is known that he travelled to France and also spent some time in Italy, eventually, he was accepted as a master in the painter's guild of Antwerp.

Despite Bruegel's nickname "Peasant Bruegel", he was not just a painter of everyday comical peasant life. He also painted religious subjects often in an unconventional manner and was greatly influenced by the painter  Hieronymus Bosch.

This can be seen in Pieter Bruegel's surreal "The Fall of the Rebel Angels" of 1562. 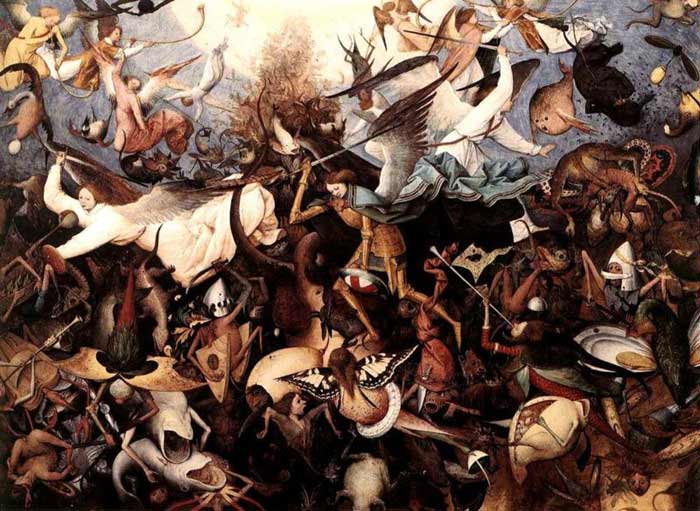 The good Angel's are shown in white driving the monstrous-animal-like fallen Angels from heaven. These strange deformed figures fill the bottom half of the painting and are depicted as writhing mass of evil entities. 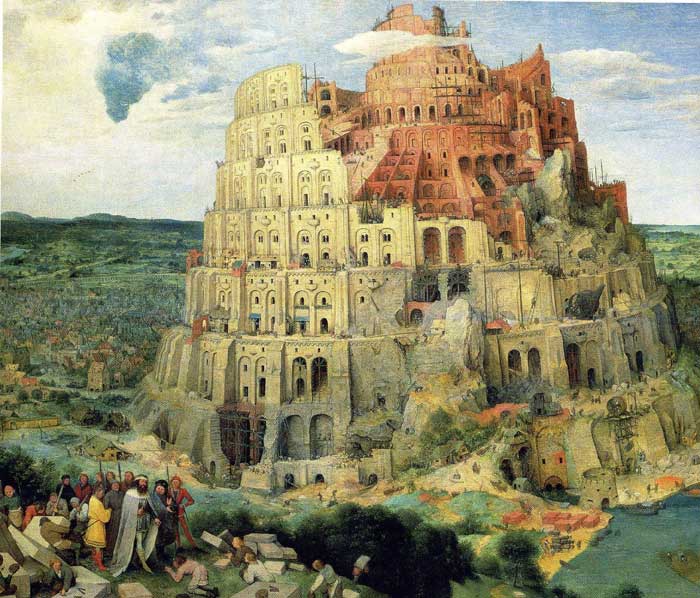 The doomed tower lurches to the left and seems to be partially under construction, part complete and part already in ruin. The poor construction methods seem lost on the officials and Bruegel has shown them finely dressed but ignorant to the obvious failings of the building. 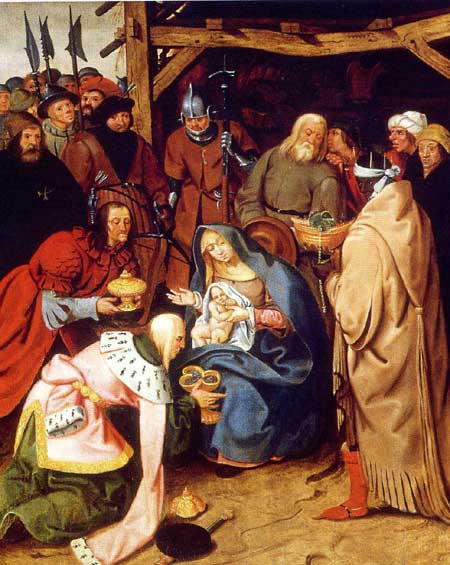 At first glance, The Adoration of the Kings would appear to be a conventional painting of a popular religious subject with the Virgin Mary placed in the centre of the composition cradling the infant Jesus.

However, on closer inspection, the gathering king's and others seem to focus on the wealth of fabulous gifts on offer rather than the Virgin and Child. There are no halo's to be seen, rather the gathering enviously gaze at the magnificent golden bowl that is offered to the infant Christ.

Even Joseph, shown as an old white-haired carpenter, holds his hat as a dignitary explains the value of the wealth on offer.

This is a bold departure from the usual depictions of the day where the Holy Family would be the main focus of attention, a brave move by Bruegel! 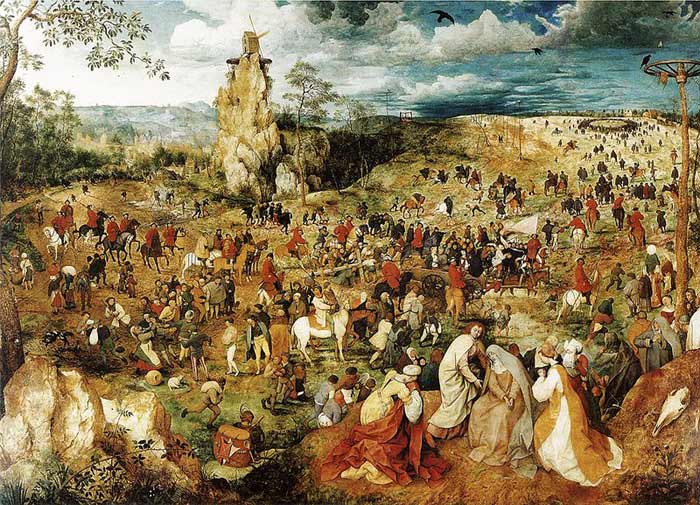 This is a crucifixion with a very unusual, high viewpoint. Among the teeming mass of figures, we have to search out the central image of Christ as he struggles under the weight of the Cross.

The procession flows from left to right climbing up Mount Calvary towards the viewer in the foreground and on to the three Mary's with St John who are already mourning.

The perspective gives us, the viewer, the view that Christ would have had from the cross.

So we are looking down on a scene that has already happened as the crucifixion parties move up the mountain, but also, simultaneously, on a large crowd that has lost interest in the main action, the crucifixion, as they turn away and return to their everyday lives. 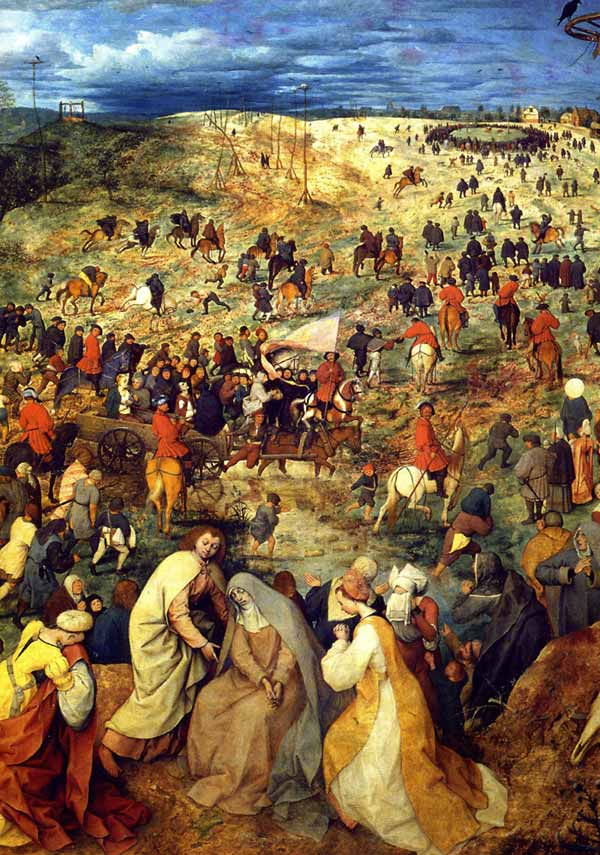 Pieter Bruegel The Road to Calvary, (detail of the mourners) 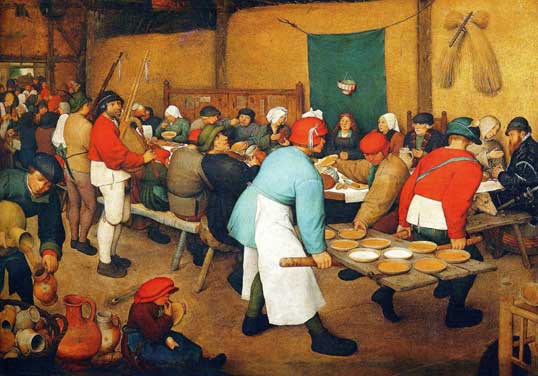 The Peasant Wedding is one of Pieter Bruegel's most familiar paintings. The images of the chunky waiters carrying the very large tray of food supported by wooden poles have been used in many an advertising campaign. How to capture everyday life was the artist's preoccupation here.

Bruegel would often dress in peasant clothing and mingle with the crowd at events such as weddings and parties. Going undercover has allowed the painter to capture real life such as the child in the foreground who uses his fingers to mop up any remaining food on his plate and the pitcher bearer who fills another tankard of ale.

These images, charming as they are, present a snapshot of sixteenth-century peasant life. 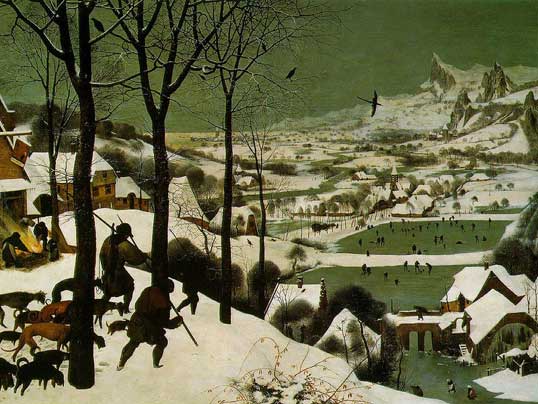 For me "The Hunters in the snow" always conjures up memories of cold, crisp winter days, a well-used image by the Christmas card industry it is another very familiar Bruegel painting.

We should not overlook the quality of the composition with its wonderful contrast between the dark hunters and the snow-laden landscape. The very air is filled with the cold green cast of winter and is mirrored on the frozen lake where village folk skate and generally amuse themselves.

The fact that we recognise this work so readily should not distract from our appreciation of the outstanding quality of this painting. 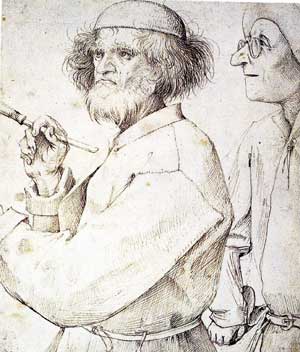 This is thought to be a self-portrait of the artist.