Paolo Uccello was born in Florence in 1397. He was apprenticed to the sculptor and metalworker Lorenzo Ghiberti and was admitted to the painters guild in 1414. Paolo was also a lifelong friend of Donatello.

He married Tomasa Malifici in 1453 and a son, Donato was born in the same year. By 1456 the couple had also produced a daughter, Antonia.

Uccello was fascinated by the new science of perspective and spent nights and days drawing objects in foreshortening. when his wife called him to come to bed he would say:
"Oh what a lovely thing this perspective is!"

There are three panels, one in the National Gallery in London, one in the Uffizi in Florence and the final panel is in the Louvre, Paris.

Detail showing the foreshortened soldier in The Battle of San Romano.
(s) 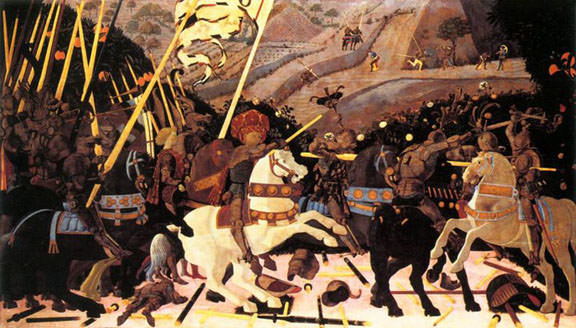 This London version is probably the artist's best-preserved picture and it clearly shows his fascination with perspective. The broken lances on the ground all point to a common vanishing point as does the fallen soldier who is foreshortened in one of the earliest examples of this type of painting. 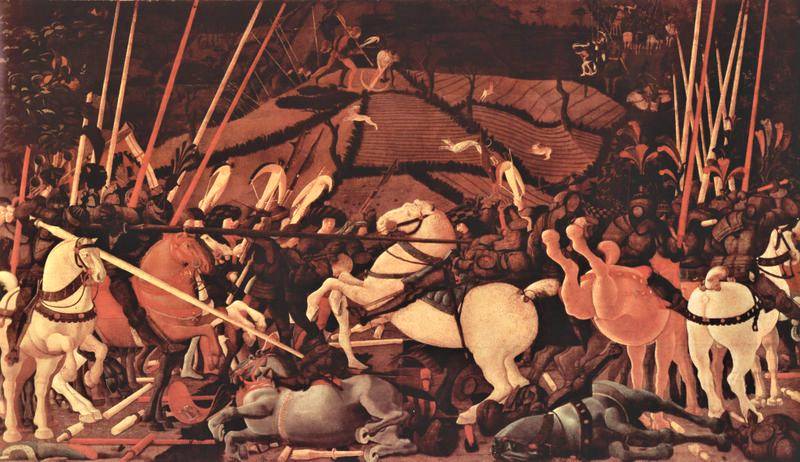 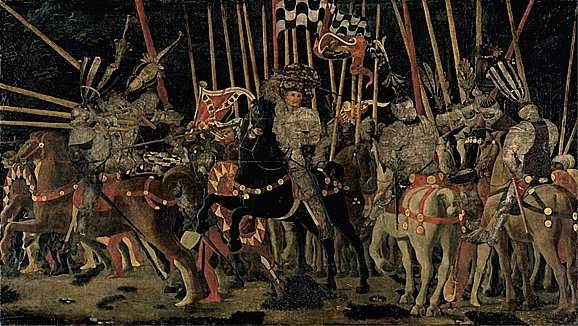 Going to be controversial here, I don't like this version. I have seen this and the one in the National Gallery in London and the difference in quality is staggering.

The painting has suffered from some poor restoration and from the passage of time, it does just not seem as impressive as the London version. I feel it is important to say what you dislike in the world of art, everyone has their own opinion.

If you feel that a heap of bricks on the floor of the Tate Modern does not do it for you say so.

Uccello, The Flood and the Subsidence of the Waters. 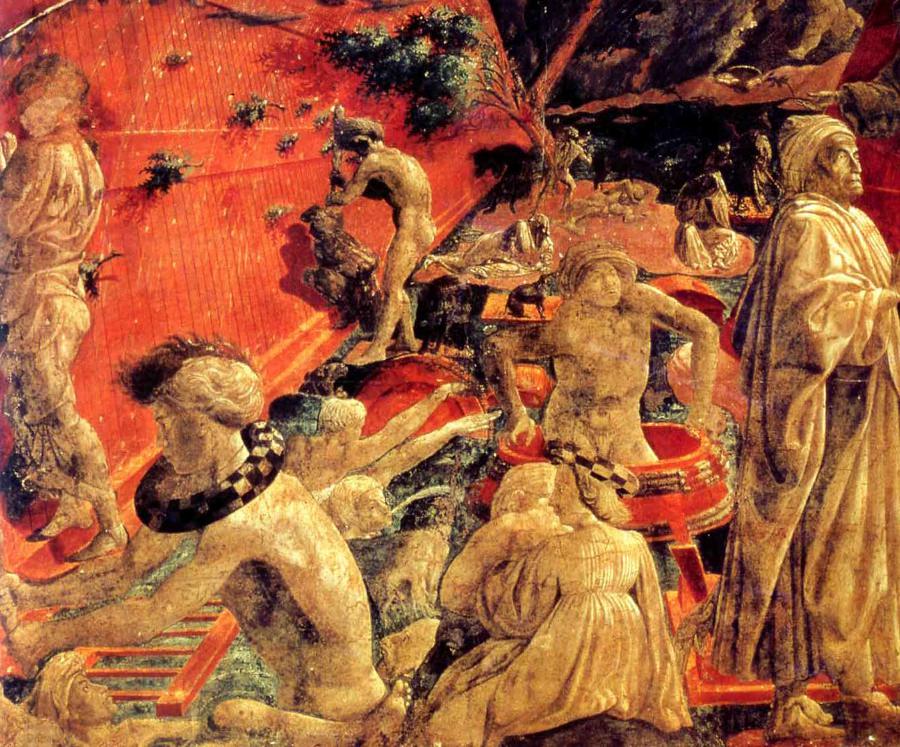 Uccello’s painting of the Deluge is a fresco executed on the wall of a cloister in the church of Santa Maria Novella, Florence, Italy.

On each side there are fragments of the wooden ark. These are painted diagonally, dramatically reducing to a vanishing-point somewhere on the horizon. This is an extreme example of Uccello’s excellent grasp and understanding of perspective.

Figures cling to the side of the ark walls in a desperate attempt to escape the waters. One climes out of a barrel while another wears an elaborate wickerwork neck decoration. A Dante like figure stands in prayer, grateful for the receding of the waters.

Uccello has demonstrated how the use of perspective can intensify the drama of the scene. His innovations and expertise were greatly admired and copied by subsequent generations of artists.

Personal opinion,
A visit to the church of Santa Maria Novella is a must for any visitor to Florence. Uccello’s fresco is one of many famous masterpieces to be seen in this wonderful building. Works by Giotto, Brunelleschi, and Filippino Lippi are among the treasures on display.

If you get the opportunity to visit this church then I would strongly recommend that you do so.

St George and the Dragon. 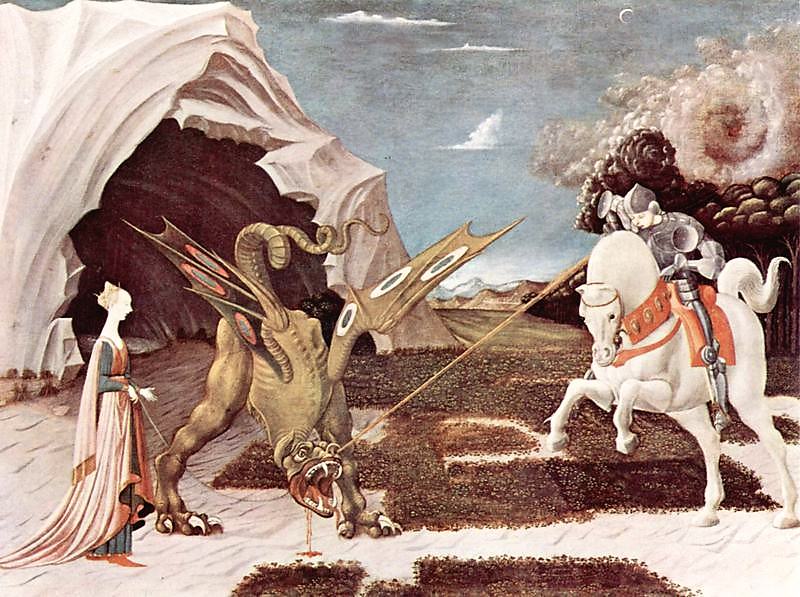 St George and the Dragon. (w)

Uccello’s St George and the Dragon features an elaborate reptilian looking dragon that has emerged from a cave. It seems to be accompanied by a damsel who appears to be far from distressed she has a tether around her waist which is attached to the neck of the dragon.

Is the fearsome monster her pet?

The narrative is that she is being held captive by the dragon perhaps as a source of food to be devoured at a later date. The dashing, armoured St George appears on a rather stylised horse, he rides to the rescue slaying the dragon with his lance.

The Hunt in the Forest.

The Hunt takes place among a forest of slender trees. The trees create a framework, a visual reference in which the action takes place.

This is Uccello's last known painting. It shows how well he understood perspective, with the hunters, dogs and horses all disappearing into the forest in the distance. A lasting testament to a great artist.