Fra Angelico's exact date of birth is not known, but 1395 up to about 1400 is the accepted estimate. He was known in Italy as Beato Angelica (the blessed).

In 1418 he became a Dominican Friar at the Carmine under his birth name of Guido di Pietro. He was based at Fiesole a town in the Provence of Florence. He was initially trained as an illuminator working with Benedetto, his older brother.

He applied the discoveries of artistic innovations championed by Masaccio while remaining faithful to the traditional ideas of religious art. The delicate beauty of his Madonna’s and angels underline his piety and devotion to the Dominican order.

He also nurtured a deeply religious love of humanity and a sense of humility before his God. This devotion to his religion and his art shaped the artist's vision of the world and proved to be the driving force throughout Fra Angelico's life.

At the convent in Fiesole, he executed several frescoes including the Altarpiece, the fine Virgin and Child with Saints. 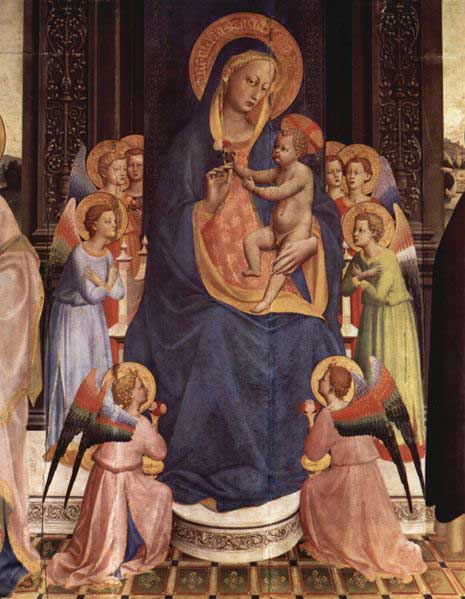 In 1436 Fra Angelico moved to the newly-built monastery of San Marco in Florence. His growing skill and reputation as an artist attracted a powerful and wealthy patron, Cosimo de Medici. 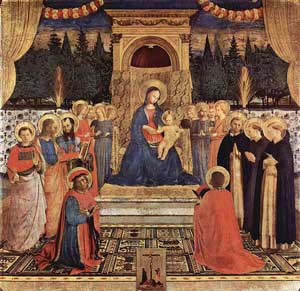 San Marco Altarpiece (w) Commissioned by the Medici family in 1440.

Cosimo had a large cell reserved for himself at the monastery, a place, no doubt, where he could escape the intrigues of political life. It was Cosimo who commissioned Beato's decoration of the monastery.

The artist painted a sacred scene in each monk's cell and at the end of every corridor. These paintings are among his finest and most beautiful works and are influenced by the work of Masaccio.

The San Marco altarpiece is rightly famous for Angelico's use of perspective, the lines of the carpet and the various overlapping saints all add to the sense of depth within the picture space.

The crucifix at the front centre of the painting is intended to look like a separate image and Angelico has mastered the optical illusion to great effect.

The monastery is now a museum and contains the major collection of works by Fra Angelico. In addition, other artists represented at the museum include Domenico Ghirlandaio and Fra  Bartolomeo. 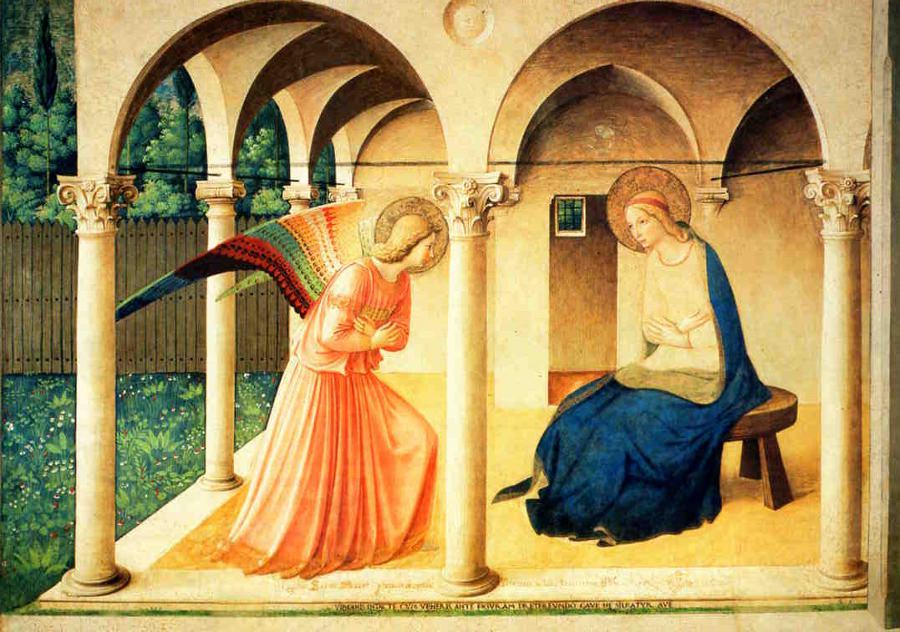 His Annunciations with their curved arches receding into the background clearly illustrate the artists understanding of perspective. 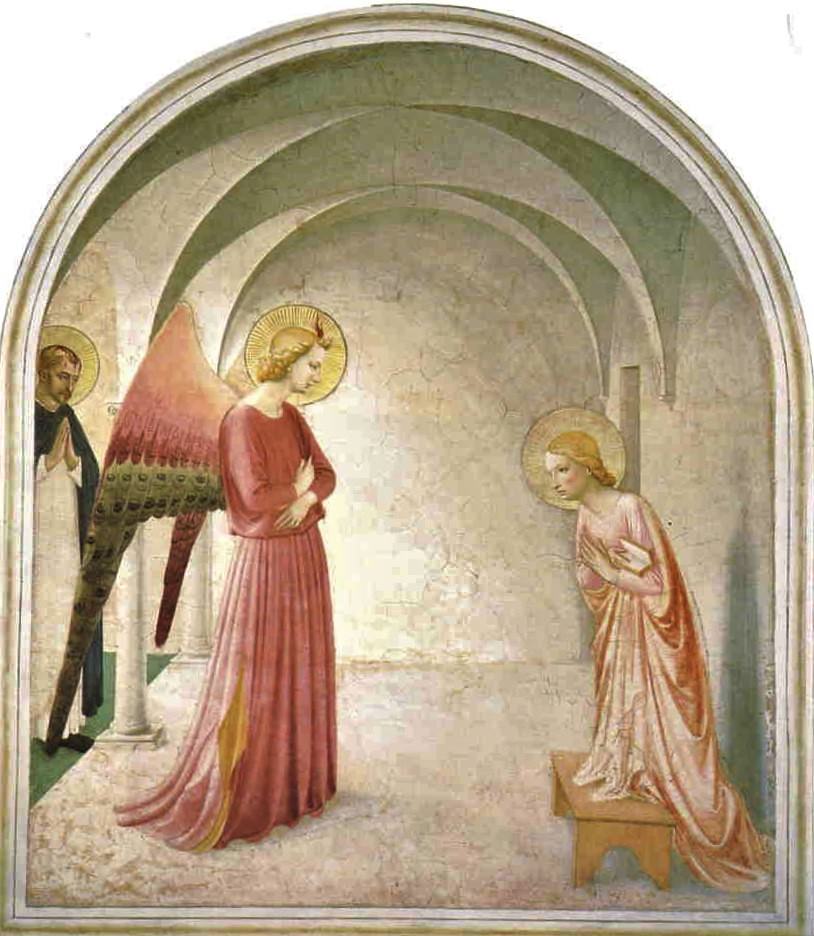 This is one of many versions of The Annunciation from the cells at the convent of San Marco. c. 1440 (s)

This is one of the most reproduced of all Fra Angelico's works from the Monastery at San Marco. It is just one of his many Annunciations. 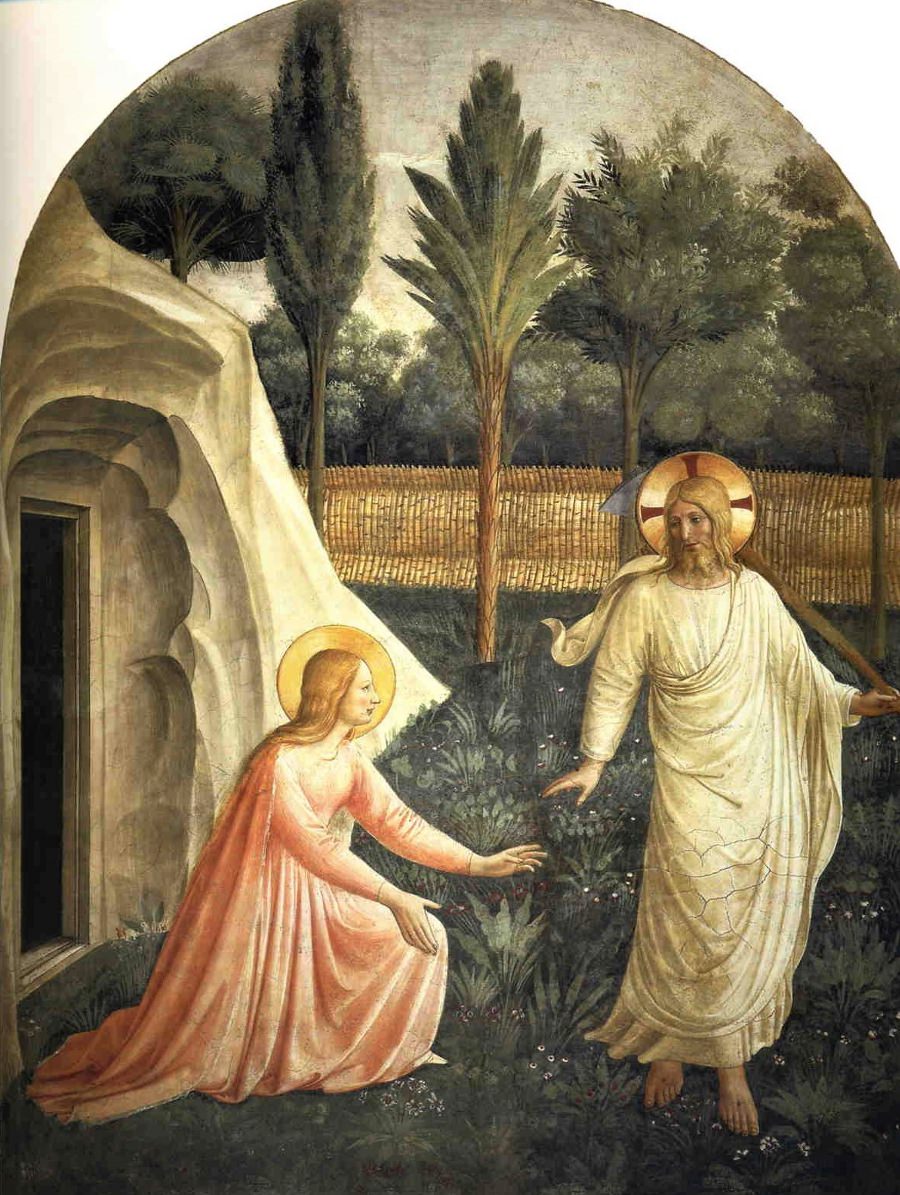 His figures of Christ and the Magdalene in his Noli me Tangere are beautifully painted despite the rather unconvincing entrance to the burial chamber set its strange rock face.

A colourful depiction of judgement day, on one side the saved are reunited with their loved ones in heaven, on the other, the damned are destined for hell!

Note the open tombs in the centre of the painting as the dead are resurrected to await judgement.

In 1447 the artist painted the private chapel of Nicholas V in Rome. His theme was the lives of St Lawrence and St Stephen. It is highly likely that some of the work on these frescoes was completed by assistants. 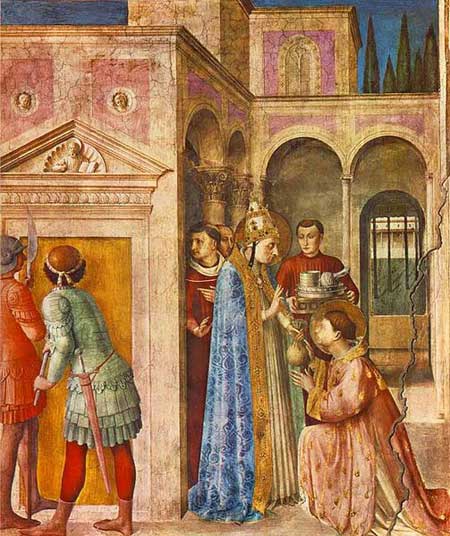 Fra Angelico is often referred to as “the last Gothic painter,” but this label is misleading. In the early years of the fifteenth-century artists were increasingly influenced by changes in artistic methods.

The work of Masaccio, Brunelleschi and Donatello had shown that through the use of perspective techniques it was possible to create the illusion of a three-dimensional image on a flat surface. The move away from traditional gold backgrounds was slowly gathering pace. 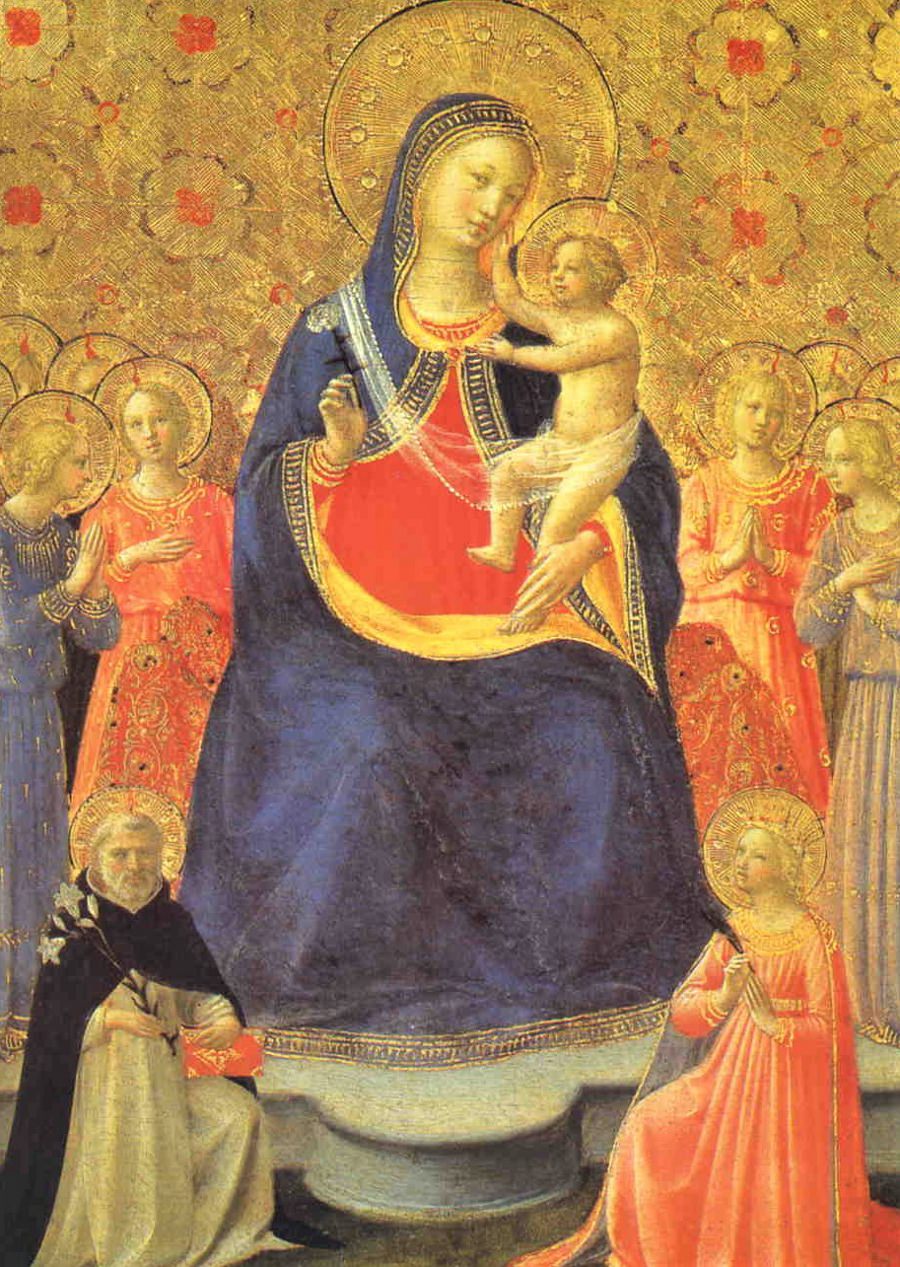 The Madonna with Child with Saint Dominic and Saint Catherine of Alexandria. c. 1435. (s)

Fra Angelico’s Madonna and Child with St Dominic and St Catherine of Alexandria clearly illustrates this transition. While a gold background is used the figures display the solid three-dimension qualities associated with Masaccio’s work. This small charming tempera on wood painting is a beautiful blend of the Gothic and the new Renaissance styles.

Beato died in Rome in 1455 and was buried in the church of Santa Maria Sopro Minerva.

The artist was beatified (the third of the four steps to canonisation) on October 3rd 1982 by Pope John Paul II, and he was declared patron of Catholic artists in 1984.

He also has a hazelnut liqueur "Frangelico" named in his honour, truly a measure of the artist's lasting popularity. 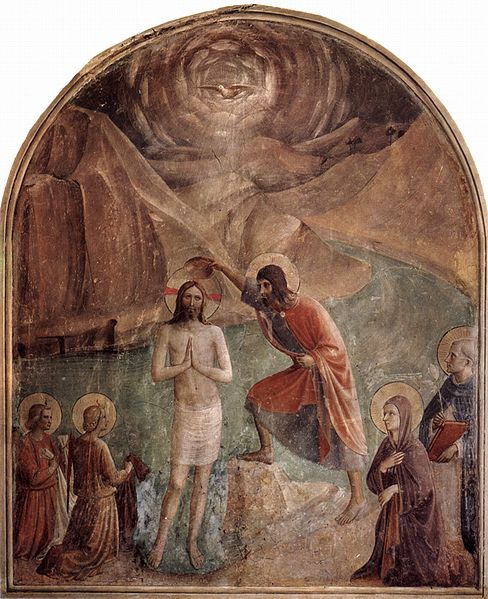 The Baptism of Christ (w)
FacebookTwitterPinterestTumblrRedditWhatsApp