The Sistine Chapel.
The Home of Iconic Renaissance Art masterpieces.

The Sistine Chapel plays an important role in Italian Renaissance art history and it houses some of the most iconic images of the era. The chapel, located within the Vatican City, is named after Sixtus IV della Rovere and is built on the site of a Medieval hall the "Cappella Magna". It was used for assemblies by the Papal Court.

The building work started in 1475 ended in 1483, and the chapel was inaugurated by the Pope who dedicated it to Our Lady of the Assumption. The chapel is used by the College of Cardinals for the election of a new pope (who is considered to be the successor of St Peter).

The chapel's dimensions (40.23 meters in length, 13.40 meters in width and 20.70 meters in height) are reputed to be copied from Solomon’s temple in Jerusalem which was destroyed in 70 A.D.

When the structure was complete the side walls of the chapel were decorated in 1481 with frescoes by the greatest Italian Renaissance artists. From Florence, Botticelli, Rosselli, Ghirlandaio and Signorelli and Umbrian artists such as Perugino and Pinturicchio.

Painted imitation curtains with the pope’s coat of arms were frescoed on the lower walls above these hung tapestries by Raphael and his followers.

Initially, the ceiling was decorated with gold stars on a blue background by the artist Umbrian artist, Pier Matteo d’ Amelia.

The Chapel's decoration was completed by Michelangelo and was Commissioned by Pope Julius II. Michelangelo was reluctant to accept the work (he always considered himself to be a sculptor rather than a painter) but he eventually agreed to fresco the vault and the painting took four years to complete 1508-1512. 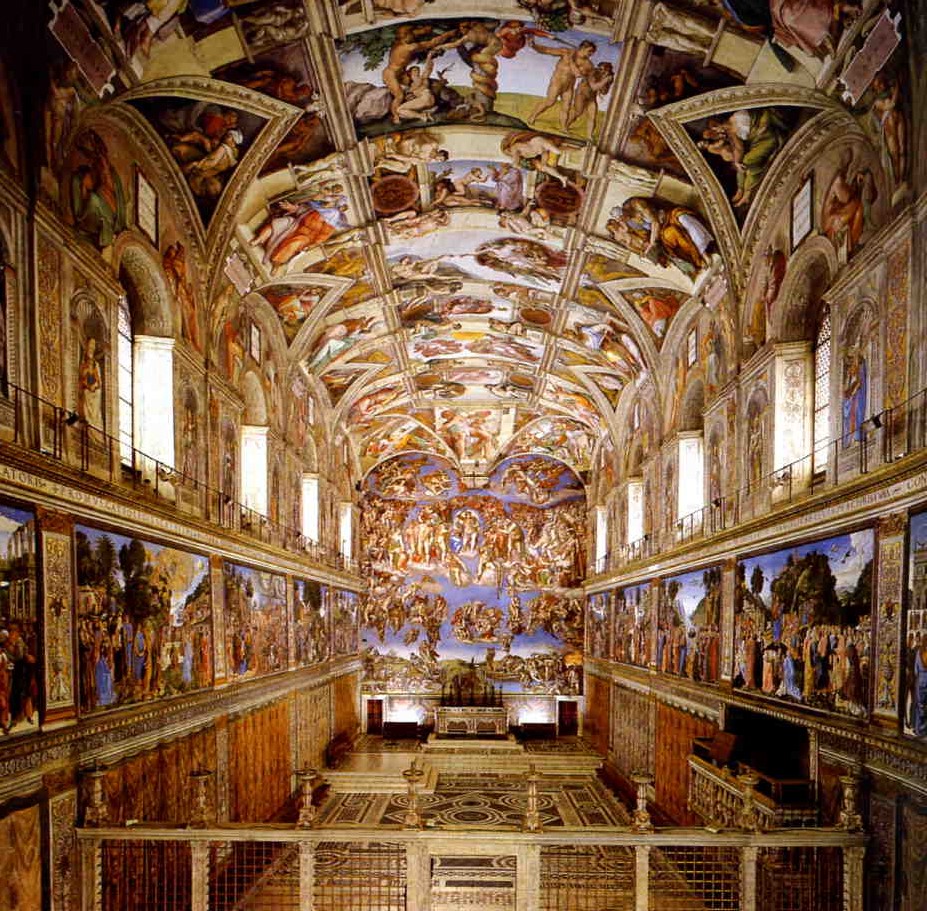 It is impossible to fully appreciate the grandeur of this building without visiting it for yourself. With its arched windows and barrel vault ceiling, you are surrounded by some of the greatest artwork ever produced.

If you love art this place will make your head spin, it is a feast for the senses and, even if you are just a curious tourist, you will be blown away.

You have got to see this great bit of technology which gives you private access to the Chapel. It's great because in reality you would never be alone in the room, which is always very crowded, and of course, in person, you can't see Michelangelo's spectacular artwork close up as you can here.

This virtual tour was prepared by Villanova University at the request of the Vatican.

Just click and drag your arrow in the direction you wish to see.  In the lower left, click on the plus (+) to move closer,  or on the minus (-) to move away. 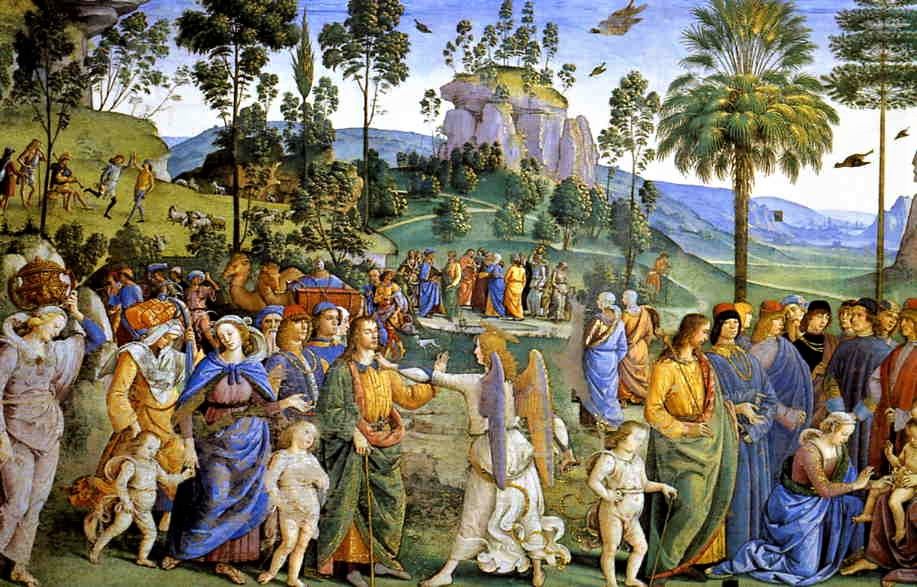 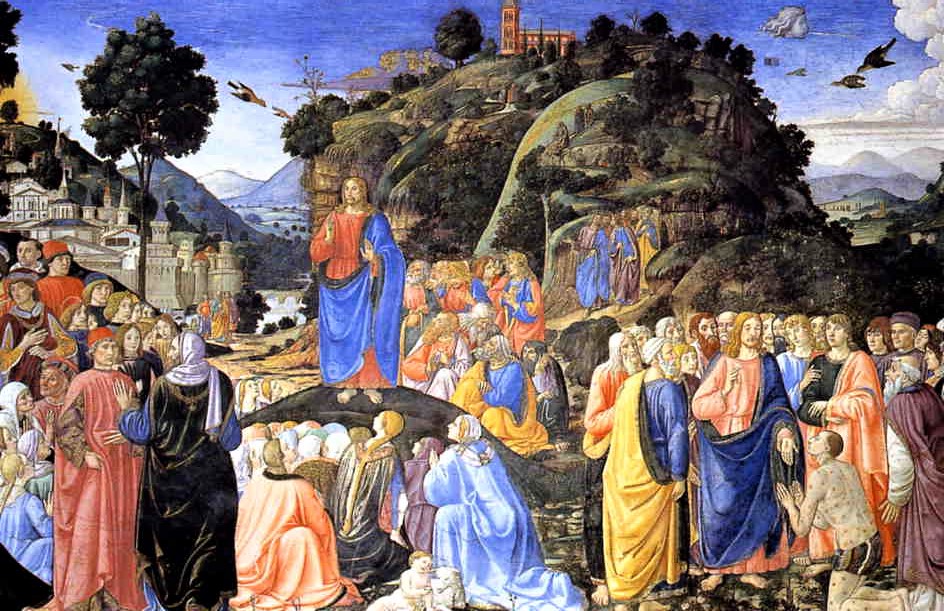 The Sermon on the Mount. Cosimo Rosselli (s)

The Ignudi support the corners of the smaller scenes on the chapel ceiling. These four examples highlight Michelangelo's understanding of the human form. (s)

The Altar wall - The Last Judgement.

Twenty years after finishing the frescoes for the vault Michelangelo painted his "Last Judgement" on the far wall of the chapel. 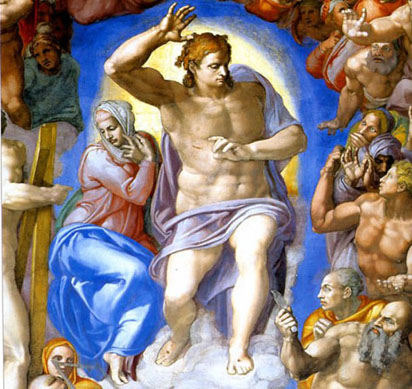 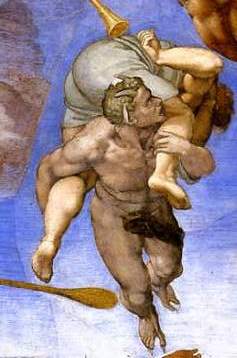 Demon from Hell. Detail from The Last Judgement. (s)

The restoration of the Sistine Chapel was done between 1980 and 1992 and the work on the Last Judgement lasted for four years ending in 1994. The restoration consisted of washing the frescoes with distilled water and a mild solvent removing the layers of dirt that had built up over the years. 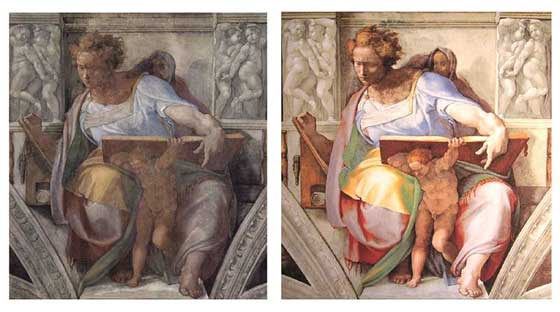 The Prophet Daniel. Before and after cleaning. (w)

All of the candle smoke produced in the chapel had dulled the colours in the frescoes to such an extent that it was thought that Michelangelo was more interested in his bulky figures than any rendition of colour.

The cleaning process has revealed the vivid, bright colours that had been skilfully blended by the artist reducing the flattening effect of the figures.

The result is a re-discovery of Michelangelo's works which can now be seen as vividly as the day the artist originally painted them.

The chapel is now climate controlled, with filters and air conditioning to deal with modern pollution levels.