Masaccio
The Work of a Renaissance Master.

Tommaso di ser Giovanni di Simone Cassai, also known as Masaccio, was another great Florentine artist who emerged at the beginning of the fifteenth century. He was born on 21st December 1401 in Castel San Giovanni near Florence and lived with his younger brother and his widowed mother.

After the death of his father, Ser Giovanni de Mone d’Andreuccio in 1406 the family lived in great poverty but the financial situation seems to have eased in 1412 on the remarriage of his mother.

Masaccio’s quite wealthy step-father, Tedesco di Maestro Feo traded as a druggist, it is likely that Masaccio lived with his fathers family while his brother Giovanni, who also became a painter, stayed with his mother. 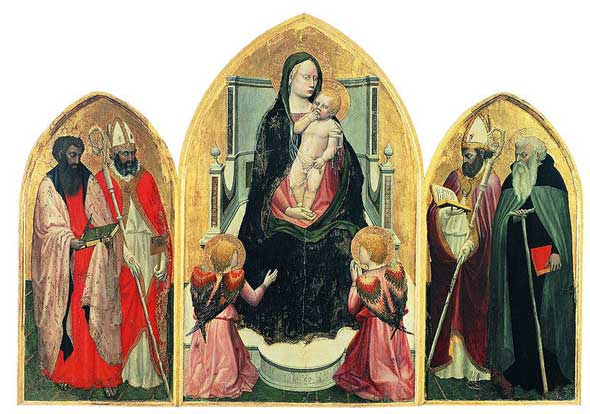 Florence was under the control of Cosmo the Elder and the Medici had become the first family of the city both artistically and politically, and the city itself was enjoying a period of calm and prosperity. Masaccio’s early artistic development is uncertain, we do not know who his master was although names attributed to his apprenticeship include Masolino, and Bicci di Lorenzo, who ran a successful Florentine workshop.

Masaccio was accepted into the guild of painters in Florence in 1422 he became acquainted with Donatello and Brunelleschi and was influenced by their work.

When Masaccio was working on his first major masterpiece eighty-five years had passed since the death of Giotto de Bondone. Giotto and his contemporaries had started to change the way in which painters viewed the world during the period known as the Proto-Renaissance.

Giotto was a major source of inspiration for Masaccio and he embraced Giotto's example in a rejection of the International Gothic style of the time. Masaccio was one of the first artists to use a vanishing point in his work employing the use of scientific perspective in his paintings. The first work attributed to him is the San Giovenale Triptych for the church of Cascia di Reggello near Florence. 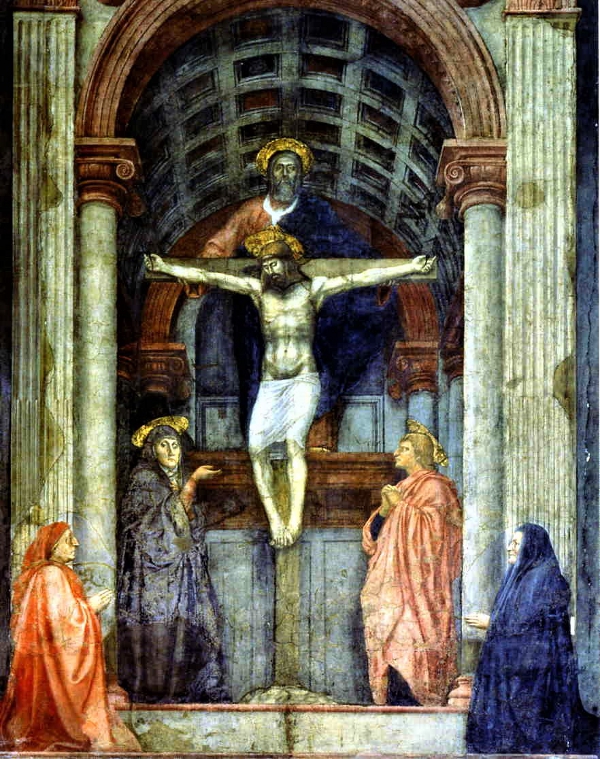 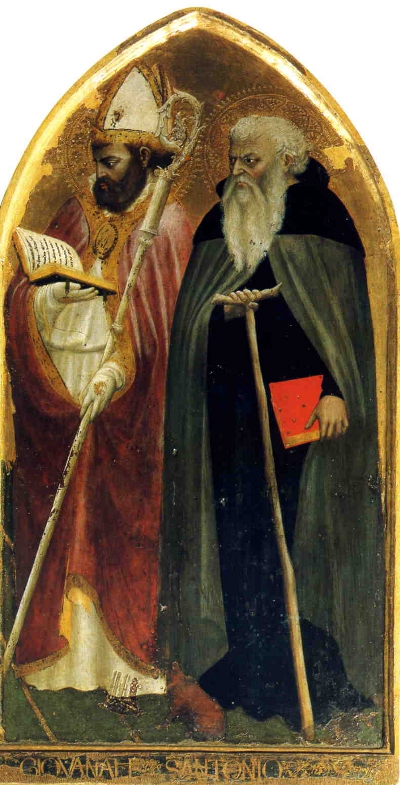 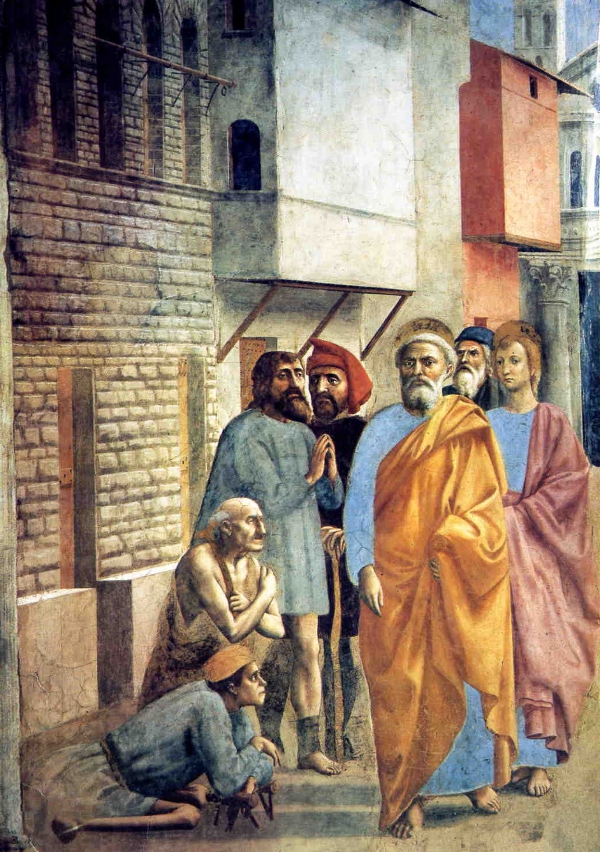 In 1424 (date disputed) Masaccio painted his Holly Trinity for the Santa Maria Novella church in Florence. This fresco is considered to be one of his finest masterpieces and was rediscovered in 1861 after being hidden by a stone altarpiece in the sixteenth century.

Masaccio in the Brancacci Chapel.

The frescoes by Masaccio in the Brancacci Chapel in Florence are among his most famous and important works. They were painted between 1425 and 1426 and contain Masaccio's best-known work the "Rendering of the Tribute Money".

This work shows Masaccio's use of perspective and of Chiaroscuro, (the contrast of light and dark in a picture) and the painting was restored in the 1980s after suffering neglect for centuries. The vanishing point is centred on the head of Christ and the shadows fall away from the chapel window as if the figures are lit by it.

St Peter appears three times in this painting, in the centre next to Jesus as the taxman demands his tribute, in the left middle ground retrieving money from a fish's mouth, and on the right paying the money to the taxman.

The Chapel also contains paintings by Masolino and Filippino Lippi.

Masaccio's work has more of a three-dimensional quality and severity of style than those of Masolino. Filippino Lippi worked in the chapel in the 1480s and his later style is relatively easy to distinguish from that of Masaccio and Masolino.

The paintings in the chapel were cleaned and fully restored in the 1980s revealing the nudity of Adam and Eve. The genitals had been painted over on the command of Cosimo III de ‘Medici who considered nudity to be disgusting. 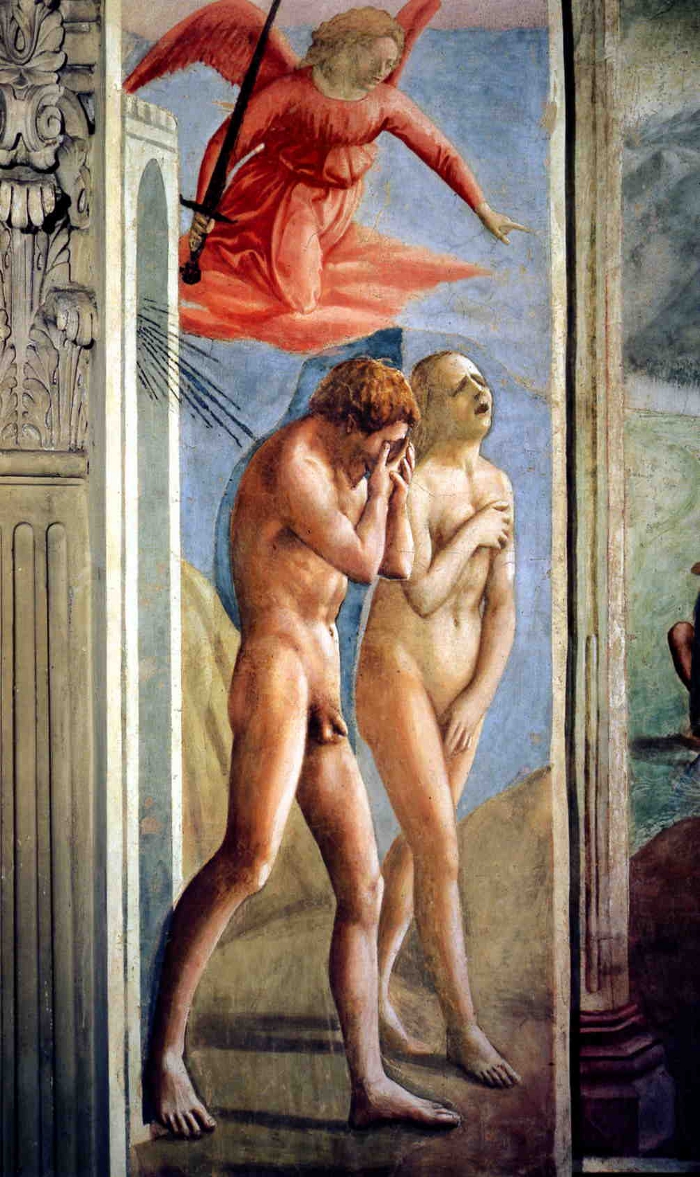 The expulsion of Adam and Eve (s) 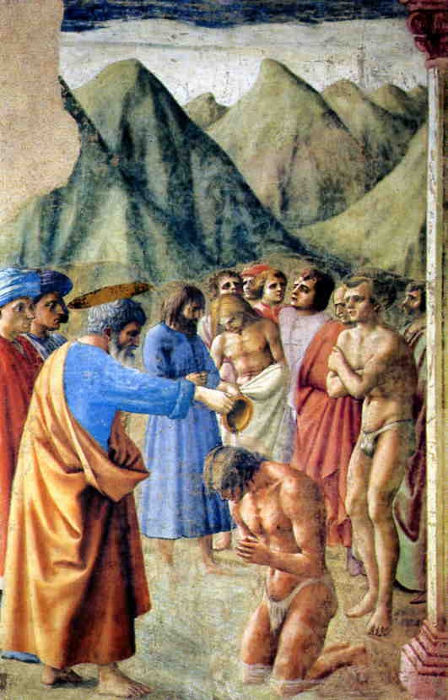 The Baptism of the neophytes (s) 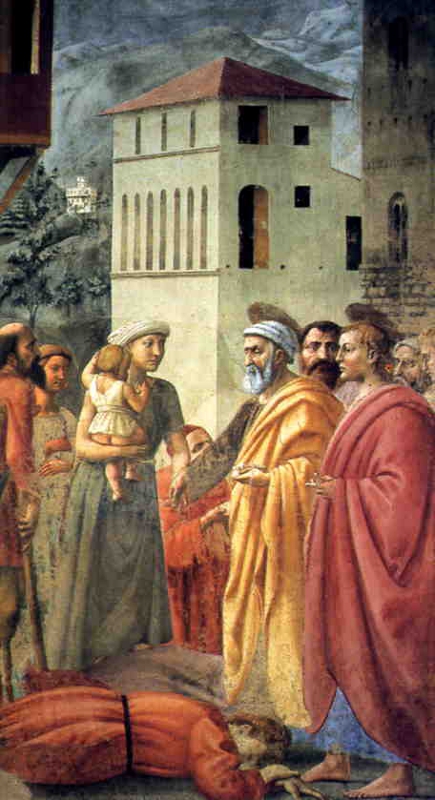 The Death Of Ananias (s) 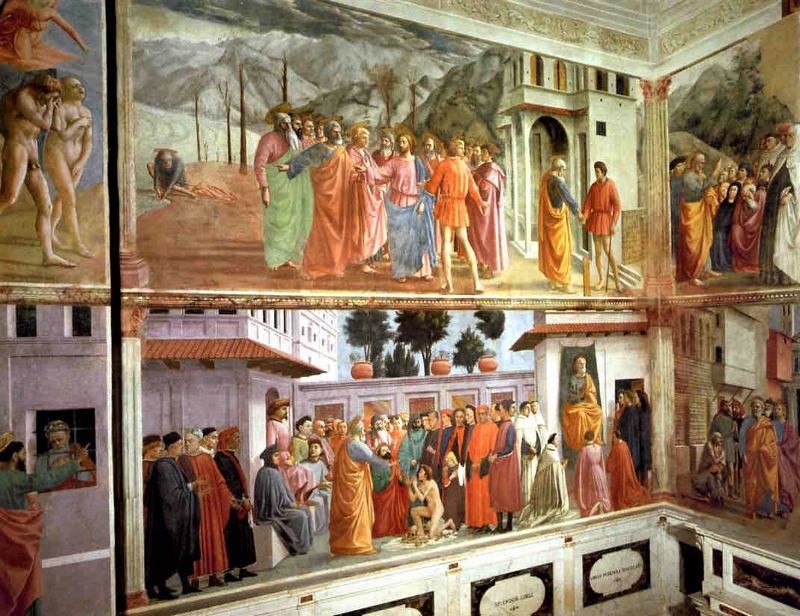 Frescoes on the left-side of the Brancacci Chapel (s) 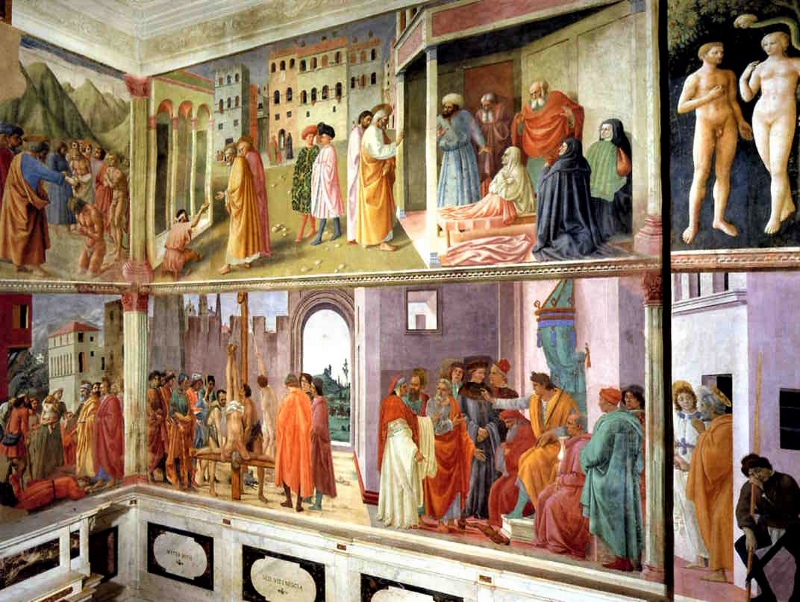 Frescoes on the right-side of the Brancacci Chapel (s)

In 1426 Masaccio produced the only work dated and credited to him. The Pisa Polyptych intended for the church of the Carmine in Pisa is now completely dismembered with its remaining panels distributed to museums around the world.

Only four main pieces survive the Madonna and Child with four Angels, the Crucifixion, St Paul and St Andrew.

The wooden structure of the polyptych had already been completed by the woodworker Antonio di Biagio when Masaccio became involved with the commission.

At least two other painters were partially involved in the painting of some of the panels, Andrea di Giusto and Lo Scheggia (the nickname for Masaccio’s brother Giovanni). 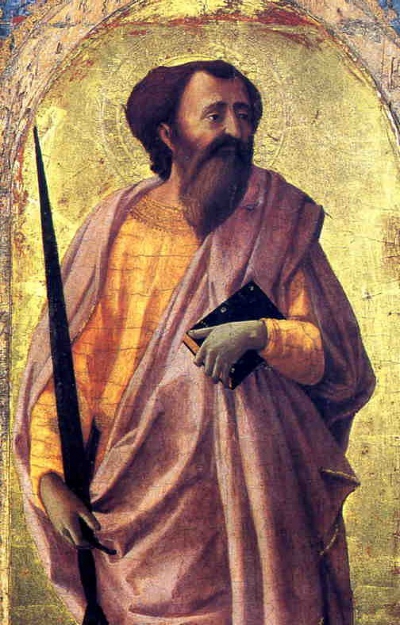 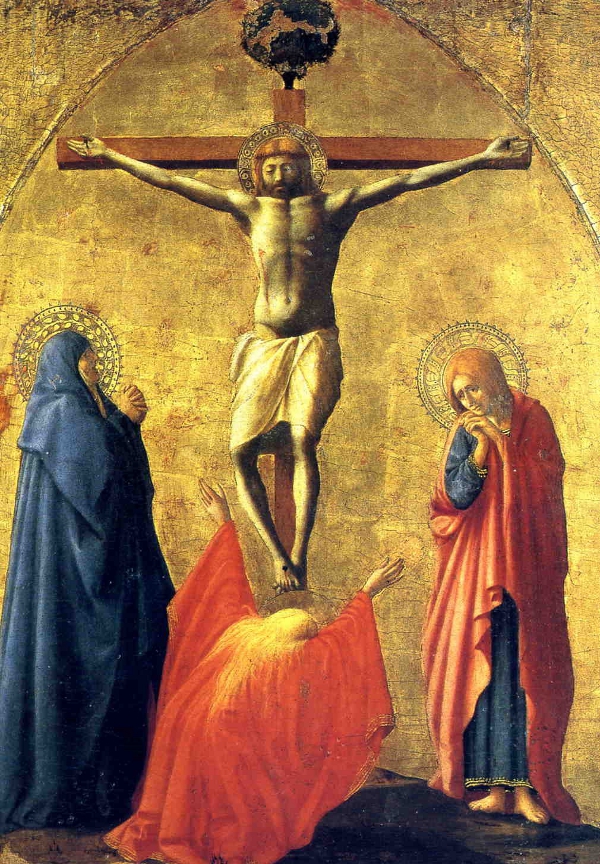 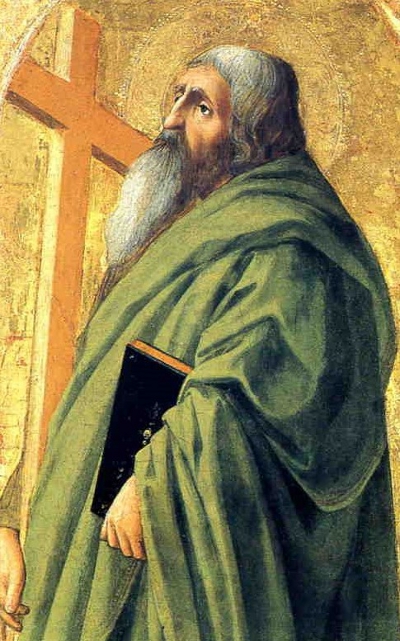 In about 1428 the artist left Florence and travelled to Rome where he died at the age of 27.

During his short life, he did not enjoy the popular esteem given to some of his contemporaries, his fame was confined to other painters, but his influence on successive generations of artists is profound.

It is said that all the Florentine artists studied his work, including Michelangelo. His legacy was to direct Italian Painting way from the Gothic style and towards a more realistic and natural interpretation of the world.