Born in 1386 Donatello was the greatest Florentine sculptor of his age, and had worked in the studio of Lorenzo Ghiberti. In his early years, he worked in Rome with Fillippo Brunelleschi, excavating and studying in the ancient city.

The lessons that these two artistic giants learned in Rome became important for the future development of Italian art.

Ghiberti is famous for winning the competition to design the doors for the Baptistery in Florence. The artist assisted Ghiberti with some of the work on these doors and had also received artistic training in a goldsmith's workshop. In fact, Donatello had earned a living during his time in Rome by working in goldsmiths shops.

The statue of St George, made in about 1420, is one of the most important works in his development. In this work, the sculptor had broken with the Gothic style of statues and their solemn rows of saints. St George is totally real, steadfast, and determined in his defiance of any enemy that may approach.

The figures of St George, St Mark and St Louis of Toulouse, were commissioned by the various wealthy Florentine guilds, to fill the niches around the church of Orsanmichele in Florence.

The statue of Zuccone was created for the decoration of Florence Cathedral. There is a famous story that Donatello kept saying 'speak, speak' as he sculptured it.

( I hope he wasn't too disappointed when the statue failed to 'speak'.)

The Annunciation is carved from limestone. It is a sensually pleasing work and its gentleness is in stark contrast to the harshness and brutality of his Feast of Herod and Zuccone figures. This delightful image can be seen in the nave of Santa Croce in Florence.

The statue of St Louis was Donatello's first experiment in bronze casting. It was a great success, St Louis is portrayed as a bishop with the flowing garments of his rank adding to the solidity of the figure.

The artist achieved great fame in his own lifetime and was often called upon to work for other Italian cities. In 1427 he was commissioned to make a bronze relief for a font at Sienna. His subject was "The Feast of Herod" a scene from the life of St John the Baptist.

This work shows the moment when Salome asks Herod for the head of John as a reward for her dancing and gets it. The executioner kneels carrying the head of the saint on a platter and the King recoils in horror. 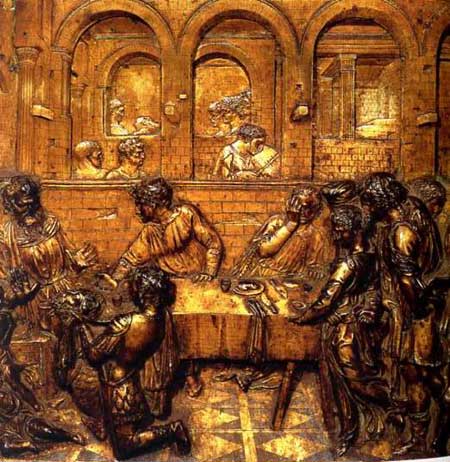 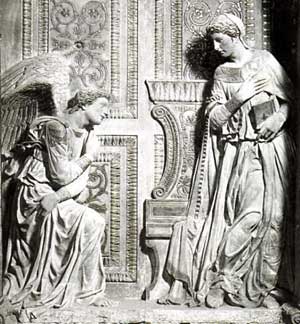 In 1443 the sculptor was in Padua and executed his statue of Erasmo on horseback, better known as "Gattamelata" ( the honey cat ).  Erasmo of Narni was a famous mercenary soldier who fought for many Italian city-states. He became dictator of the city of Padua in 1437 and died the same year that Donatello completed this work. 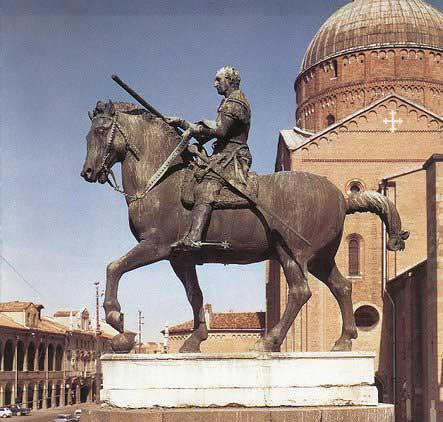 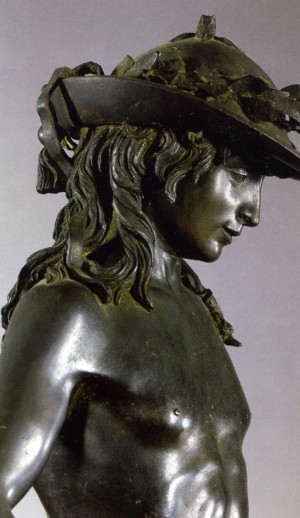 The sculptor's statue of David made in the 1440s was the first male nude statue since classical times, it was also the first freestanding work to be cast in bronze of the Italian Renaissance.

This is a strange pose for a man/woman! The statue looks very effeminate and has an almost comical quality. Has the young male/female wondered into a theatrical cloakroom and dressed in whatever was available?

However, the carving of the figure is wonderful and the artist has attempted to capture a prepubescent youth who is yet to mature into adulthood.

Click on the here to go to the "Three David's" page and compare the statues.

Donatello’s Judith and Holofernes was created as a companion piece for his statue of David. Intended for the Palazzo Medici it was assembled from eleven separately cast pieces to make up the finished group.

The figure of the beautiful and wealthy widow Judith from Bethulia in Judea dominates the composition. Holofernes, an Assyrian general, is shown in a drunken state. Bewitched by the beauty of Judith he is rendered helpless as the widow, arm raised, prepares to behead the hapless general.

The Assyrians had cut off the water supply to the Judeans in an effort to subjugate them Judith’s actions had saved her people despite breaking the commandment “Thou shalt not kill”.

Donatello died 1466 and was buried in the Basilica of San Lorenzo in Florence. 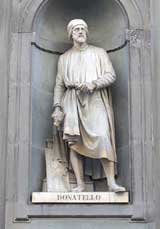 Statue of Donatello outside the Uffizi Florence. (w)
FacebookTwitterPinterestTumblrRedditWhatsApp