The Bellini Family.
An artistic dynasty from the city of Venice.

The Bellini family were a well known artistic dynasty from the Italian city of Venice. Giovanni is the most well known, but both his brother Gentile and his father Jacopo were also well regarded as painters.

Jacopo was one of the founders of the Renaissance style of painting he ushered in the modern Venetian Renaissance era. Born in c.1400 many of his most important works have disappeared but his workshop was the most productive in Venice.

Listed as an assistant to the Umbrian painter Gentile da Fabriano by 1424 Jacopo was working in Venice creating his own impact on the art of the city. He named his eldest son Gentile in honour of his old master from Umbria and his daughter Nicolosia married the painter Andrea Mantegna in a union between the two artistic families.

Gentile was born in c.1429 and has been rather overshadowed by his brother Giovanni. However in his lifetime he was famous as one of the foremost painters in Venice.

His portrait paintings brought great wealth and fame to the Bellini workshop, he was also the official portrait artist for the Doges of Venice.

Gentile was made a count palatine of Emperor Frederick III and ten years later in 1479, he was sent to the court of Sultan Mehmet II cementing the close relationship between Venice and the Orient. 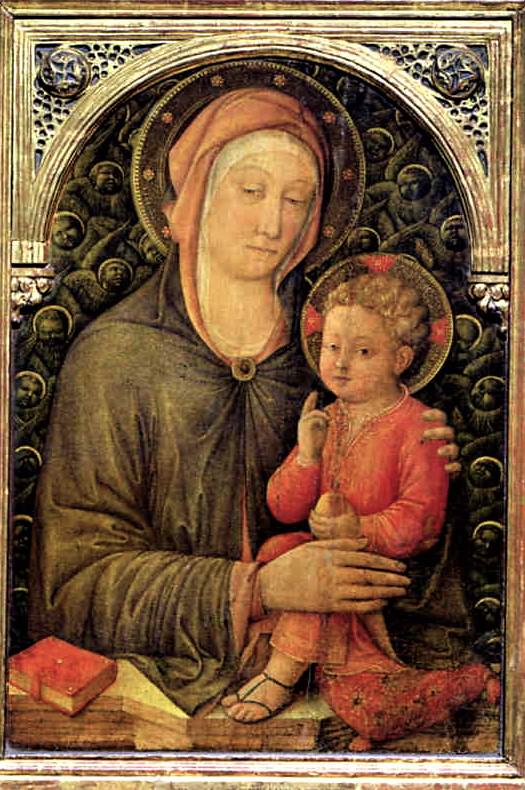 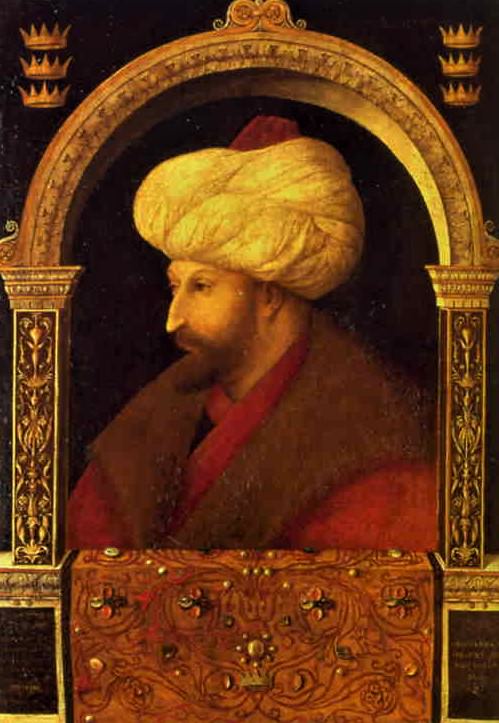 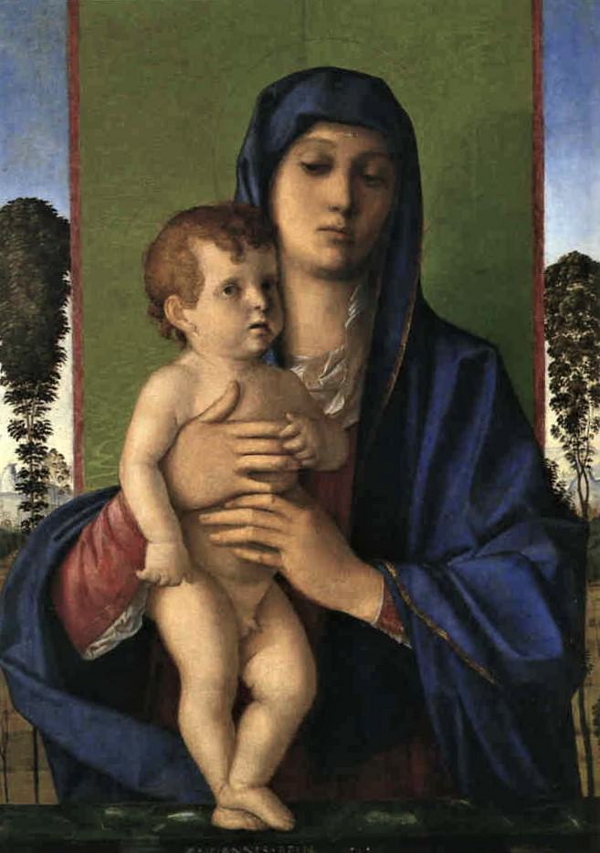 Giovanni was born in about 1431 and grew up with his brother in his father's house in Venice. His brother-in-law was Andrea Mantegna and Andrea's influence is apparent in "The Agony in the Garden" painted in 1459-1465. 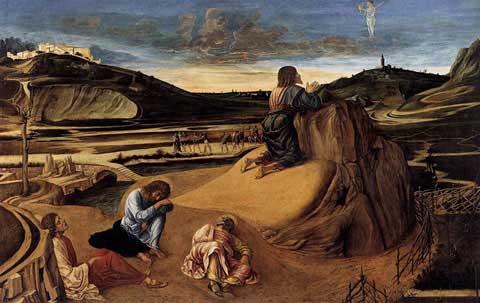 Giovanni Bellini, The Agony in the Garden.

I have seen this painting in the National Gallery in London. The foreshortening of the reclining figure, plus the metallic quality of the clothing, owe much to the influence of Andrea Mantegna, and the landscape could almost be a scene from a surrealist painting, very Dali! 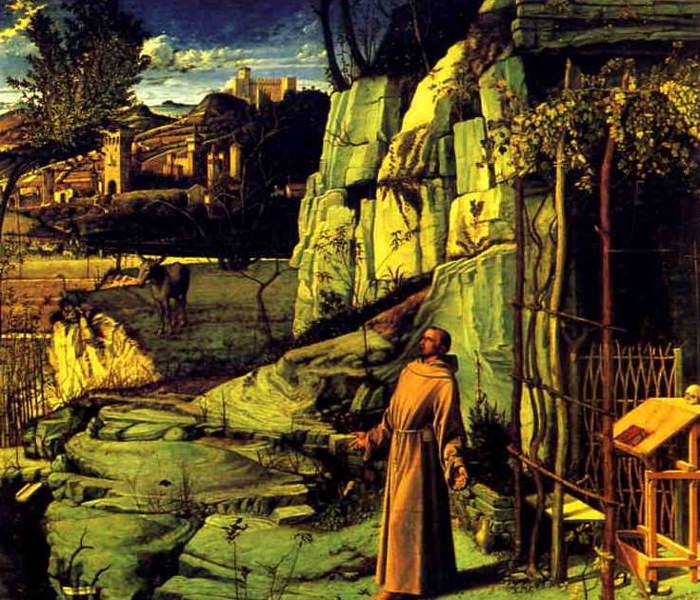 Giovanni’s painting of St Francis features a light source originating from somewhere to the top left corner. This lighting has produced a golden glow onto the elaborate rocky landscape.

St Francis stands with his arms outstretched ready to receive the stigmata in what is one of Giovanni’s most celebrated works.

On the death of his brother Gentile in 1507, Giovanni became the most prominent artist in Venice but was deluged with more commissions than he could complete and had difficulty in delivering the various works on time.

Giovanni was appointed as a conservator of the paintings in the ducal palace in Venice and was paid a fixed annual pension for his work. He was at the head of a famous workshop and his pupils included Giorgione and Titian.

His mastery of the oil painting medium, newly introduced to Venice in the 1470s, had a profound influence on his famous apprentices. 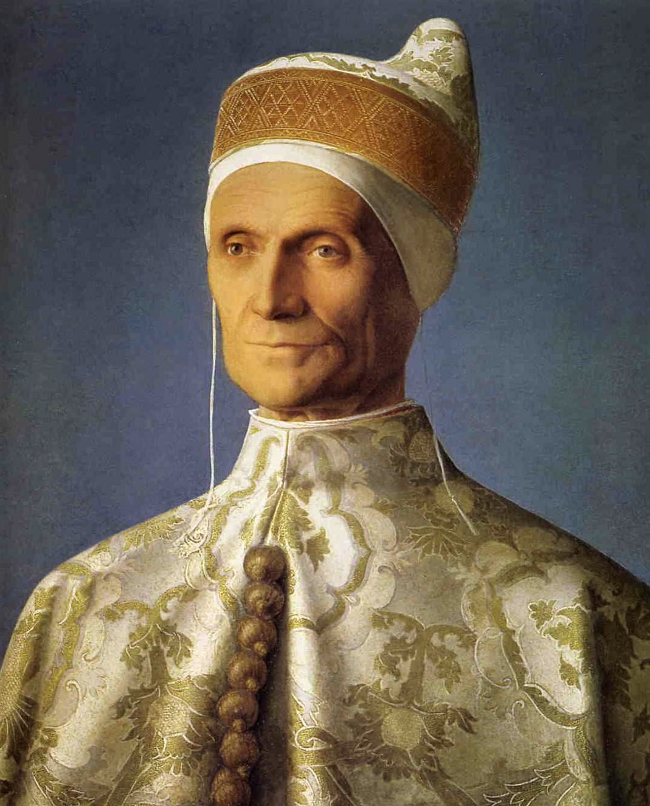 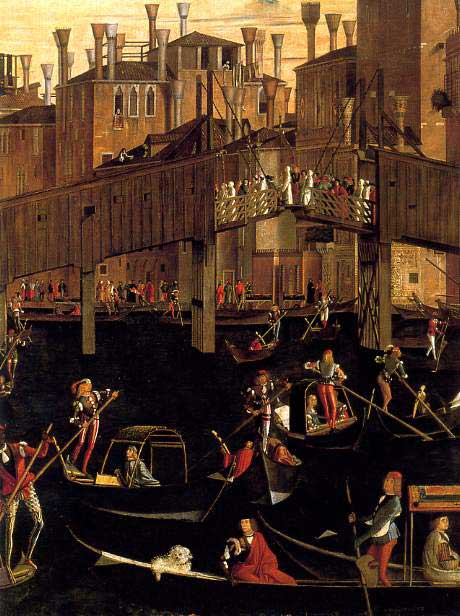 The miracle of the True Cross is possibly Gentile's most famous painting, it is part of a ten painting cycle by Gentile in collaboration with various artists of the day.

Most of Giovanni's work in the Doge's Palace was destroyed by fire in 1577 but some of his official portraits of the Doges survive, such as The Doge Leonardo Loredan of 1502.

The Feast of the Gods.

In his old age Giovanni painted "The Feast of the Gods", a work regarded as a Renaissance masterpiece, but Giovanni died in 1516, the picture was finished by his former pupil Titian. 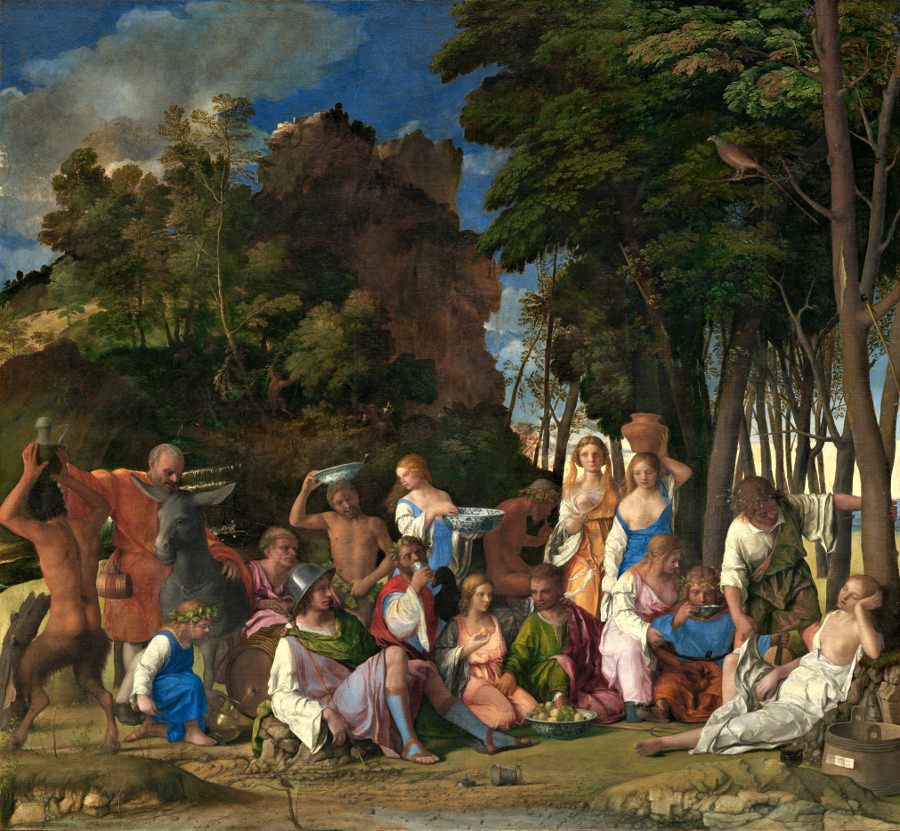 The Feast of the Gods, 1514. (w) Bellini and Titian. National Gallery of Art. Washington.

The painting contains a multitude of Roman mythological Gods including; Jupiter, king of the Gods, the nymph Lotis, Priapus, the god of fertility, Bacchus, God of wine, Pan, the god of music, Neptune, the god of the sea and many other deity satyrs and nymphs.

This is one of the few mythological paintings by Giovanni. It was the artist’s last major work. A substantial part of the landscape was added to by Titian

Bellini was influenced by the work of Leonardo da Vinci and later by the Northern artist Albrecht Durer. Durer had visited Venice in 1506. He admired and absorbed the lessons of Italian art and it seems that a mutual appreciation of Durer’s art was admired in Venice.

Some of the sharpness displayed in Giovanni’s work may reflect this influence from the art of the North. 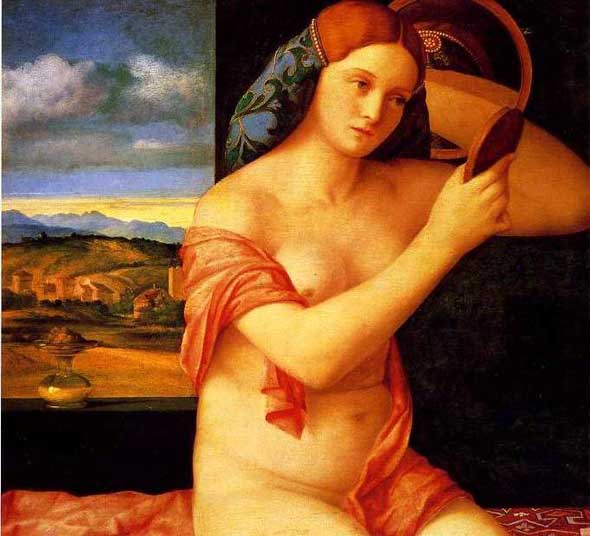 The Lady Combing her hair is one of the artist's final works and was painted when he was eighty-five years old.

Almost all of his art had been preoccupied with religious subjects but this is a refreshing and charming late change that mirrored the evolving Venetian style. 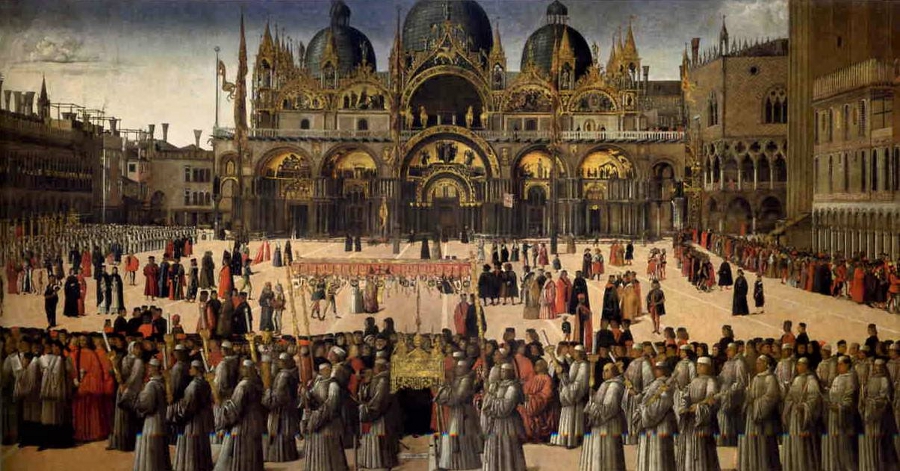 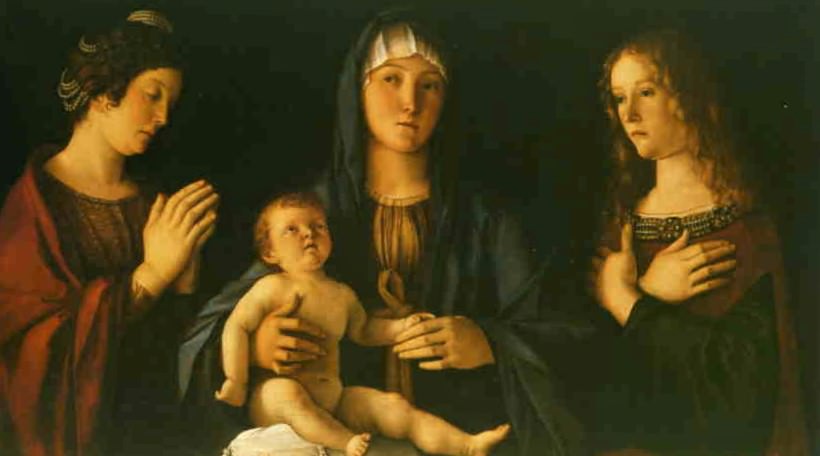 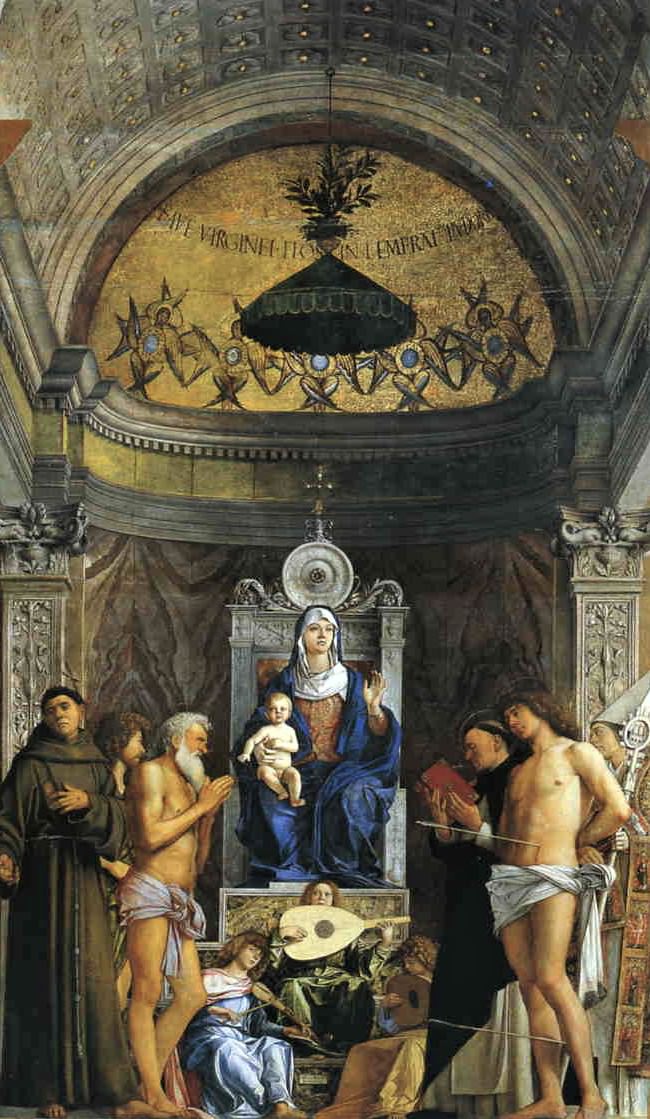