Correggio.
The Renaissance Artist of Parma.

Antonio Allegri more commonly known as Correggio was born in 1489 in the northern Italian town that he is named after. It is not known how much influence (if any) other major artists from Rome or Venice had on his work.

He was influenced by Mantegna's work in Mantua but, according to the great art historian Vasari, he never visited Rome.

Details of his life are sparse but his major works were executed in Parma a world away from his southern contemporaries. We know that he married a lady from his hometown, Girolama Francesca di Braghetis, and had at least one son, Pomponio Allegri, who was also a painter.

Correggio's first major commission was in 1519 for the convent of St Paul, the Camera di San Paolo in Parma. He painted a scene of marble images and playful cherubs and also an image of Diana. His next work was the Vision of St. John on Patmos (1520-21) painted for the dome of the church of San Giovanni Evangelista in Parma.

Correggio's Assumption of the Virgin.

Between 1526 and 1530 he decorated the dome of Parma Cathedral with his great masterpiece The Assumption of the Virgin. The painting is crowded with figures receding upwards and gives the illusion of an open sky as the Virgin ascends into heaven. 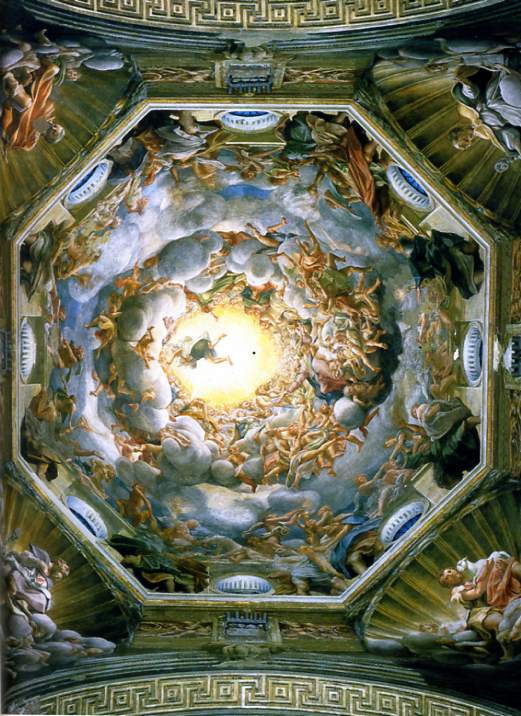 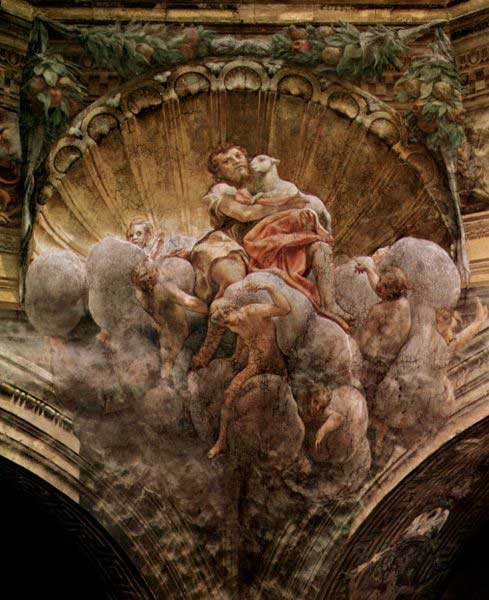 Detail. St John the Baptist. From Correggio's Assumption of the Virgin. (w) 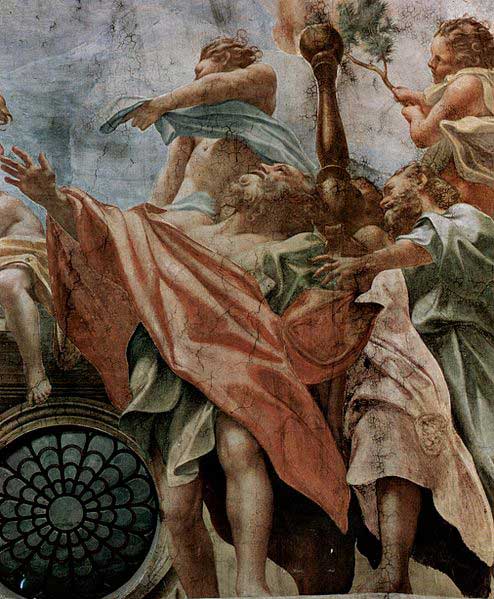 Detail of Correggio's Assumption of the Virgin (w)

Correggio's painting is a swirling mass of figures. These are angels who guide the Virgin upwards. They sing and play musical instruments and below stand the apostles who gaze in bewilderment at the scene. In the centre of the composition, Jesus descends to greet his mother. The base of the dome is decorated with the four protector saints of the city of Parma, these are; St John the Baptist; St Hilary; St Thomas; and St Bernard.

Criticism of Correggio was widespread, mainly of his public works. His fresco in the dome of Parma Cathedral was described by one visitor as a “ragout of frogs’ legs.” Considering that the illusion of an open ceiling created by Correggio was the first in northern Italy the criticism seems to be totally unjustified.

One of Correggio's most famous paintings is The Holy Night. The scene is lit by the dazzling light radiating from the manger as the happy mother gazes at her new-born son. 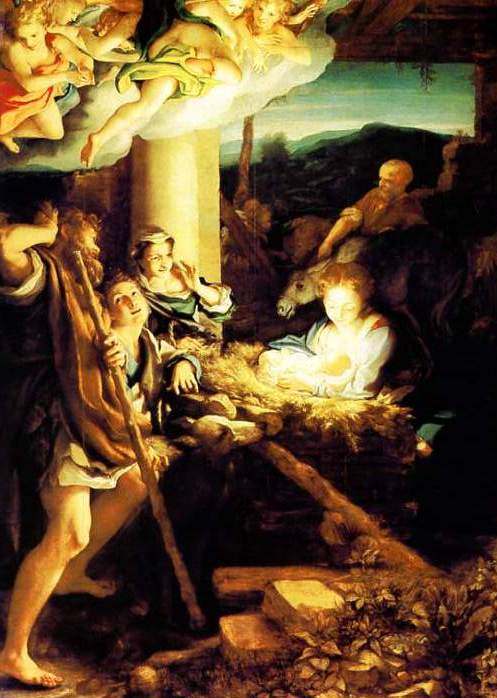 In the background, we can see St Joseph tending to one of the animals and the foreground is dominated by the figure of a shepherd who has rushed to witness the miracle.

Two servant girls appear in the mid-ground, one is looking at the shepherd, and the other raises her arm dazzled by the light of the manger. The angels in the top of the picture ride on a cloud of expectation as they herald the birth of the infant Jesus.

The Holy Night which is also known as The Adoration of the Shepherds, has been handled with great sensitivity by Correggio. This popular subject is treated as an intimate miracle in which the light creates a dramatic feel to the painting.

The Holy Night makes full use of the chiaroscuro effects that soften forms within the painting, an effect that is Leonardo like. But the light that radiates from within the image reminds me of the great works by the Baroque master Caravaggio; a masterpiece! 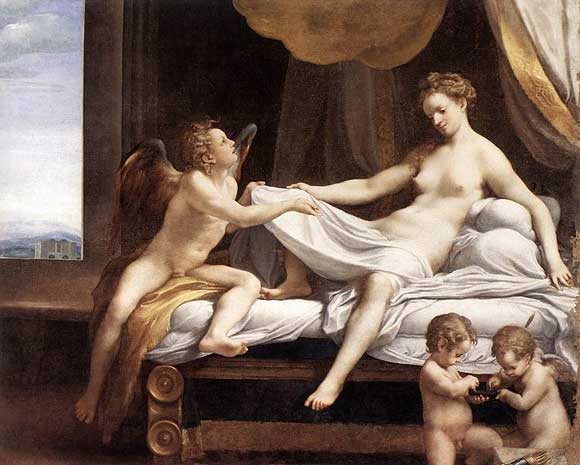 This is yet another commission from Federico II Gonzaga and forms part of the series from the loves of Jupiter. It is now housed in the Galleria Borghese in Rome.

Ganymede Abducted by the Eagle, 1531

Ganymede Abducted by the Eagle, 1531, is one of a series of works by the artist depicting the Loves of Jupiter from Ovid's Metamorphoses. Commissioned by Federico II Gonzaga of Mantua, these paintings are in stark contrast to his religious works.

Jupiter and Io, also from 1531, is now housed in the Kunsthistorisches Museum of Vienna. 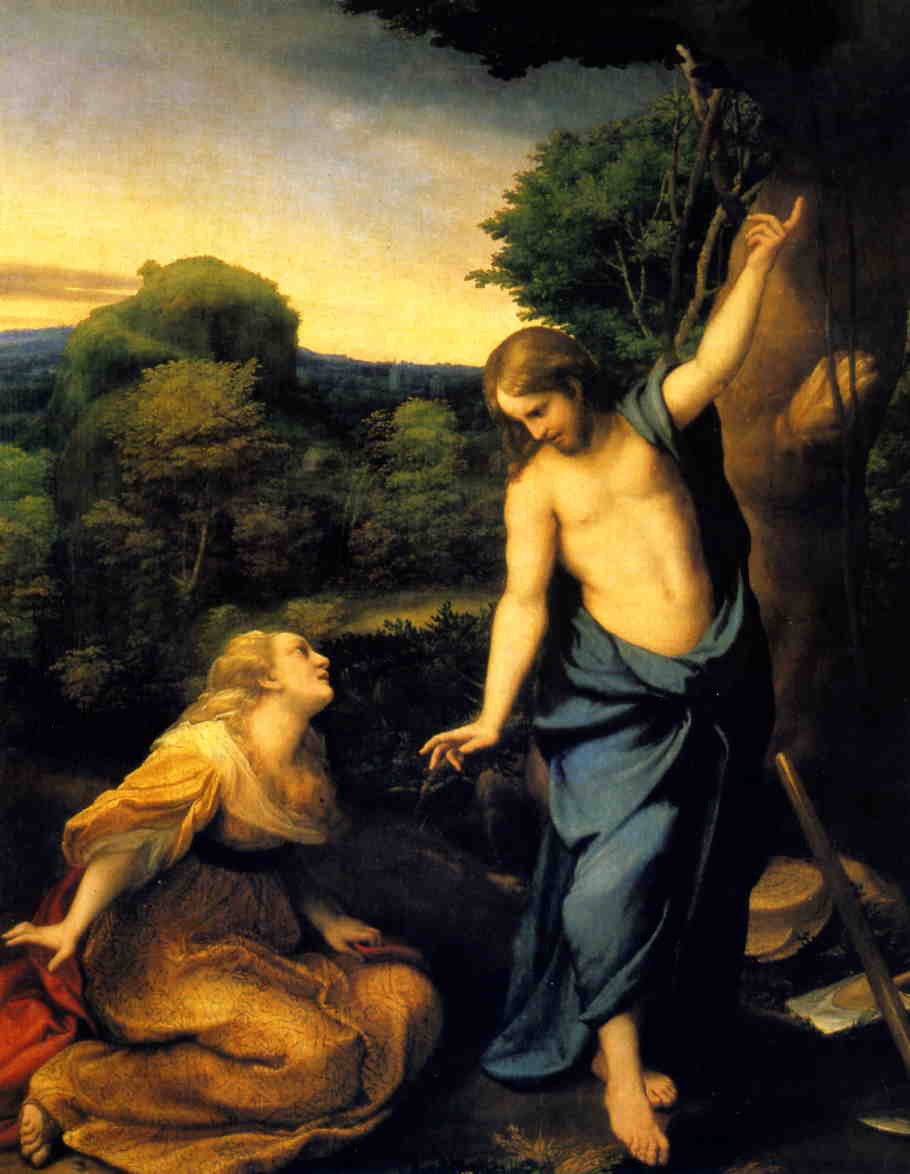 Correggio’s painting, Noli me Tangere ('touch me not') features Jesus after his resurrection. Mary Magdalene kneels in wonder, gazing upwards at the sight of the risen saviour.

Jesus has asked Mary not to touch his resurrected body signalling his departure from the human world. Jesus indicates that breaking this physical link and replacing it with one of faith from within is now the means of devotion to god.

Noli me Tangere as a subject was very popular during the Renaissance period and indeed throughout art history. Some of the artists who have been inspired by the subject include; Titian, Fra Angelico, Fra Bartolomeo and Hans Holbein the Younger. 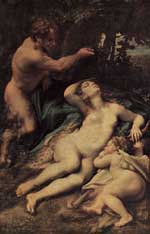