Albrecht Durer.
The Leonardo of the North

Albrecht Durer was the first Northern artist to be directly influenced by the first-hand contact with the Italian Renaissance. He was born in Nuremberg on 21st May 1471, one of at least fourteen children.

His father was a goldsmith and his godfather was a printer and publisher, the young artist learned the basics of drawing and woodcutting from these two men.

He became proficient in painting, printmaking, engraving and mathematics, he was also a theorist, a prolific writer on perspective and the proportions of the human body. He is regarded as the greatest artist of the Northern Renaissance, a true all-rounder, the equal of the artistic giants from Italy.

At the age of fifteen, he was apprenticed to Michel Wolgemut, the leading Nuremberg painter of his day. Wolgemut ran a large workshop producing many works of art and woodcuts for books.

Durer travelled throughout Western Germany learning his trade from masters in Strasberg, Colmar and Basel, perfecting his techniques in the German tradition of the times. On 7th July 1494 at the age of 23 and on his return to Nuremberg, he married Agnes Frey, a marriage arranged in his absence.

Nuremberg was a prosperous and independent city with close trading relationships with Italy. Between 1494 and 1495 the artist made his first trip to Venice followed by a second visit in 1505-1506. According to the artist’s letters the ageing and highly honoured Venetian artist, Giovanni Bellini, was full of praise for the young man from Nuremberg.

He made watercolour sketches as he travelled over the Alps - and what brilliant images they are -  these are the first pure landscapes ever produced in Western Art. 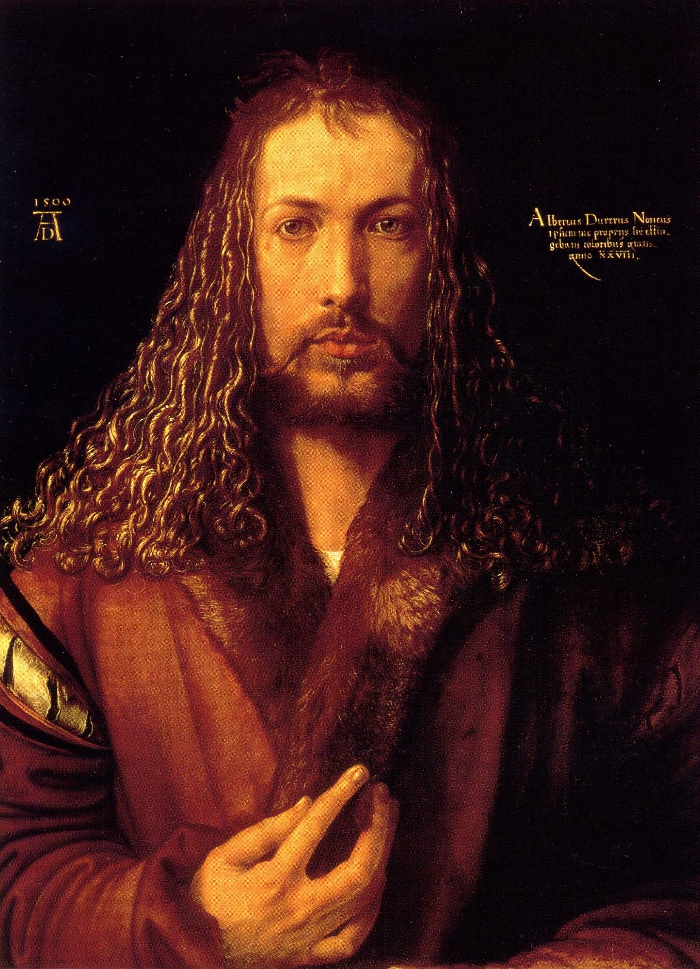 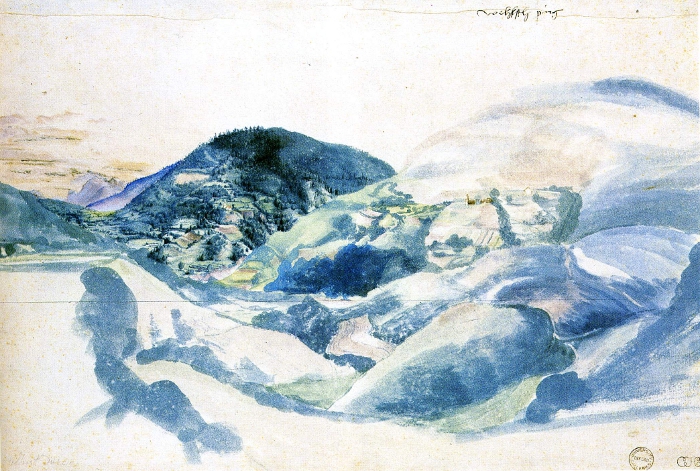 You can almost taste the coldness in the fresh, blue Alpine air.

This is also known as, Self-Portrait at Twenty-Eight Years Old Wearing a Coat with Fur Collar or, (Self-Portrait in a Wig).

This self-portrait displays the arrogance and confidence of an artist at the height of his powers. The God-like pose with the right hand raised (as if in blessing) and the ringlets of the hair always remind me of The Salvator Mundi painting of 1513, (attributed to Leonardo da Vinci). In 1500 the full frontal pose was associated with images of Christ, (portraits were usually in profile).

Durer improved the printing techniques of the time and expanded the subject matter that they depicted. Instead of the tradition of making engravings to order he kept stocks of his work selling many at home and on his travels to the Netherlands and beyond. 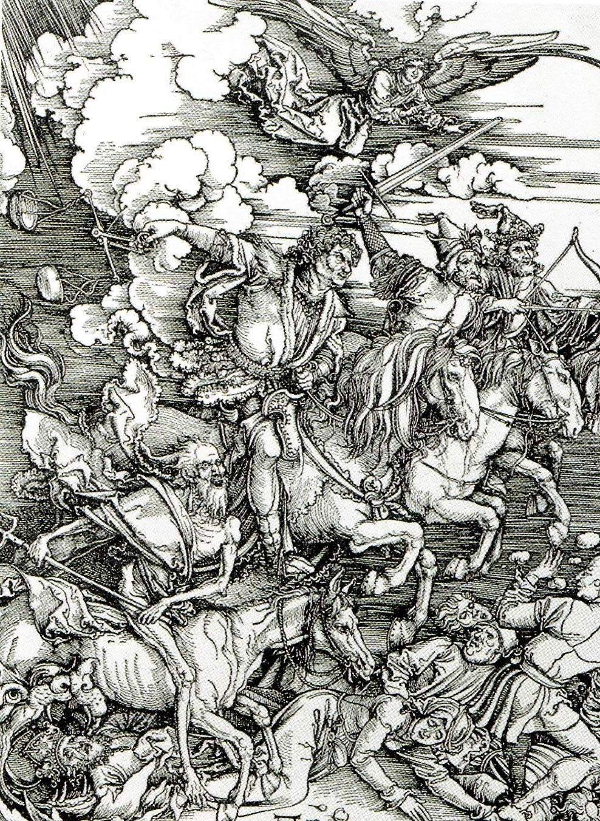 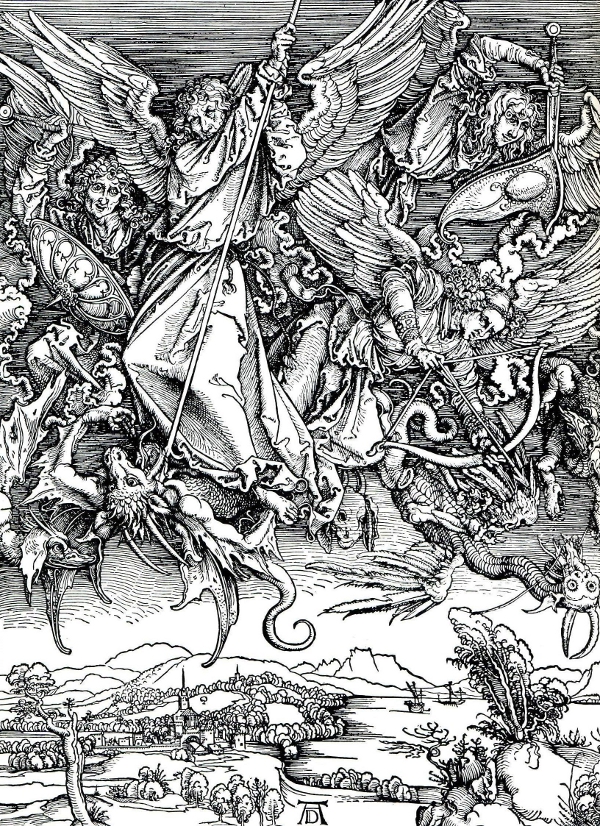 The artist also produced many famous engravings. His Adam and Eve of 1504 was produced the year before his second trip to Italy, and in many ways attempts to utilise some of Durer's new Italian learning of harmony and beauty. The results are not entirely convincing but certainly, the artist was proud enough of his work, he signed it with his full name in Latin.

('Albrecht Durer of Nuremberg made this engraving in 1504'). He left for Italy in 1505, he was famous, many of his engravings were being copied, even so, the artist was keen to absorb more from the art of the Italians.

When the artist returned from Venice to Nuremberg in the spring of 1507 he had a new, more natural view of the human form. This can be shown by comparing his oil paintings of Adam and Eve with his engraving of 1504. 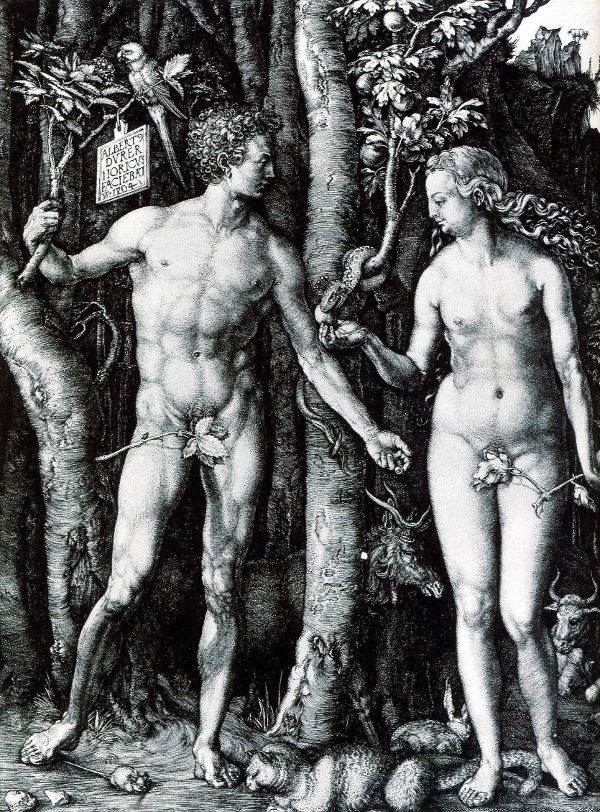 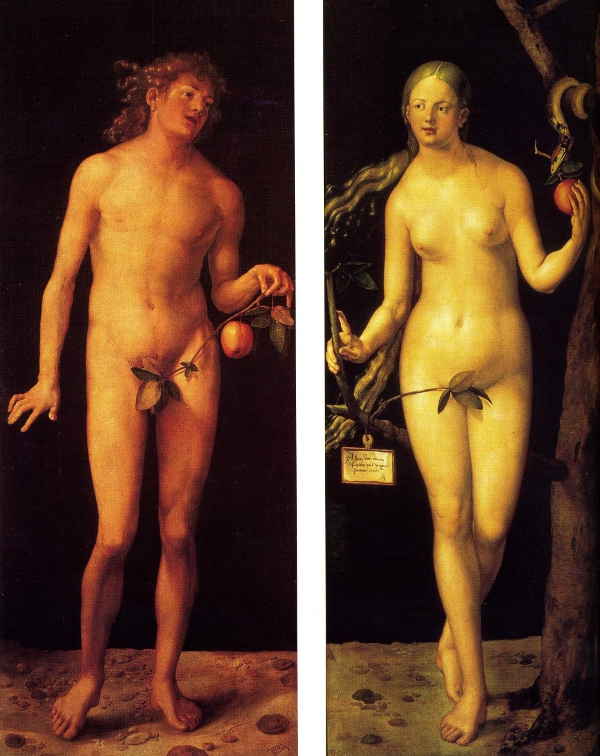 The engraving of 1504 attempts to present idealised depictions of the human form. The figures of Adam and Eve are inspired by classical monuments, Eve, in particular, is very statuesque, her feet firmly set on solid ground.

Adam is based on the pose of the Apollo Belvedere, a marble sculpture from Classical Antiquity. The artist has created a masterpiece that required many preparatory drawings and measurements. The cat and the mouse live side by side in harmony with the elk and cow in the Garden of Eden.

The garden disappears into the dark background of the work allowing the clear outline of the figures to show in contrast to the shade of the forest.

The oil panels of 1507 display the influences of Italian art. They show Eve as a more complex character, see how she positively dances to take the forbidden fruit from the serpent coiled on the tree of knowledge

Adam displays an air of bewilderment, unsure of the consequences of the actions unfolding before him, he receives the apple and becomes a willing party to the first sin.

It must be remembered that these two works were made using two totally different techniques and any comparisons must take this into account.

The three engravings shown below complete a famous trinity of engravings by Durer, because of their superior technical attributes these three prints are described as the artist’s Master Engravings. 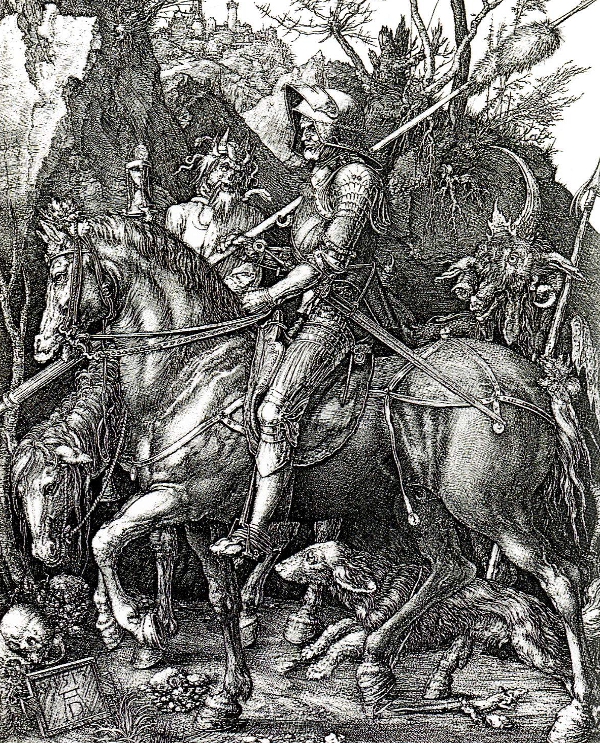 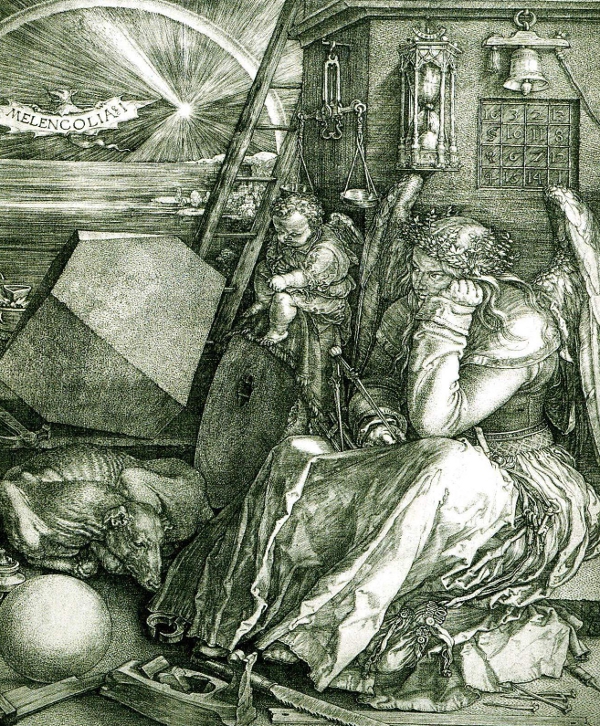 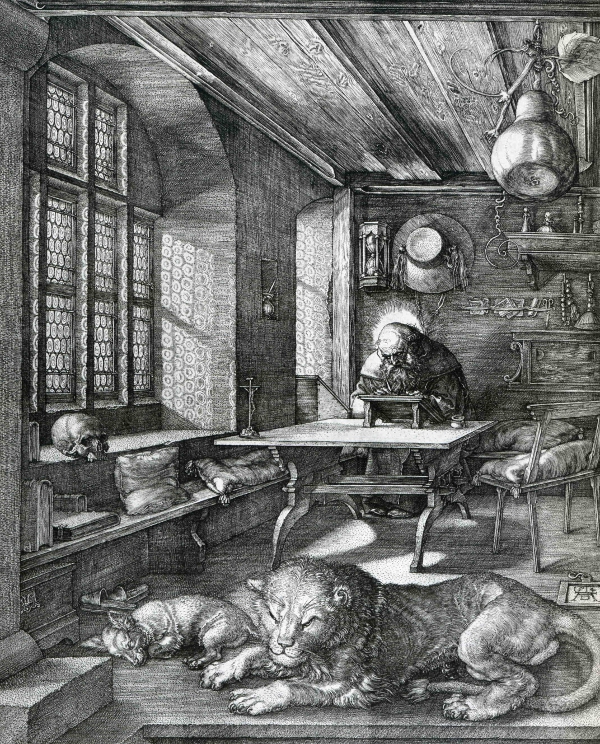 Note the figure of the Devil, (represented as a hairy goat), and Death, who looms in the background holding an hourglass. The Knight in full armour rides through this menacing landscape. Resolute he represents a Christianity that is superior to the perils of the supernatural. The Knight on his horse is based on the equestrian statues of Renaissance Italy.

It has been recorded that Durer's general character displayed an unhappy seriousness and Melencolia 1 could show the artist, frustrated by his lack of inspiration, dejected and bored by his slow progress.

St Jerome symbolises religious contemplation as he works in his study translating the Scriptures from Greek and Hebrew into Latin. The lion and the dog peacefully dozing contentedly add to the calm serenity of the scene.

The Artist and the Natural World.

These images of the natural world are another example of the polymathic nature of this great northern Renaissance artist. 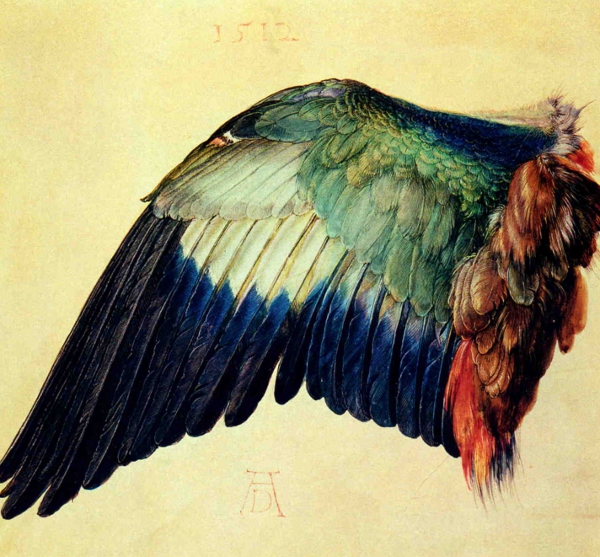 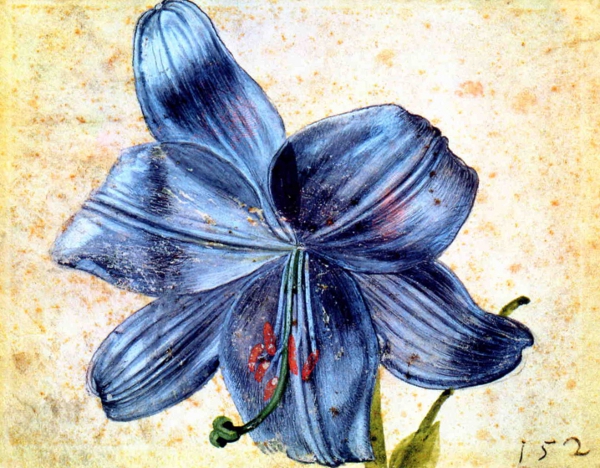 The stunningly beautiful watercolour of a lily perfectly illustrates the artist's interest in capturing the wonders of the natural world.

The superb colours in the study of a birds wing are a stand out feature of the artist's skill. The blues and greens of the wing are exceptional as is the blood stained red areas at the detached section of the wing. It is among the finest examples of his many paintings of birds. 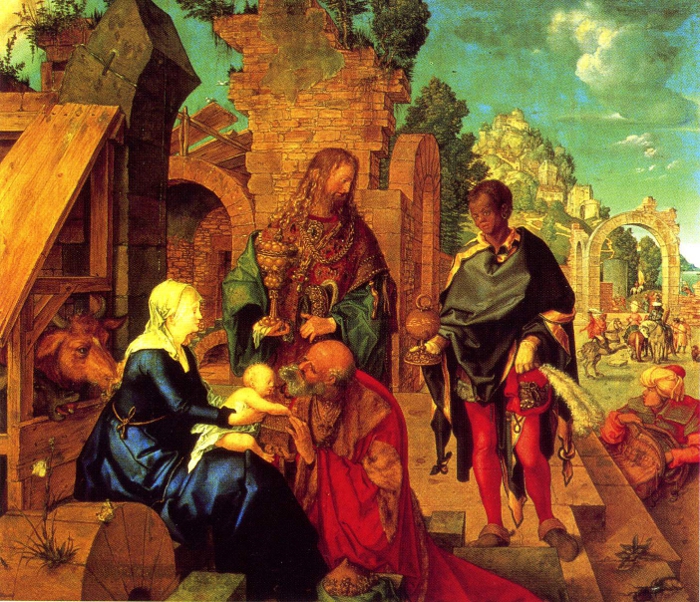 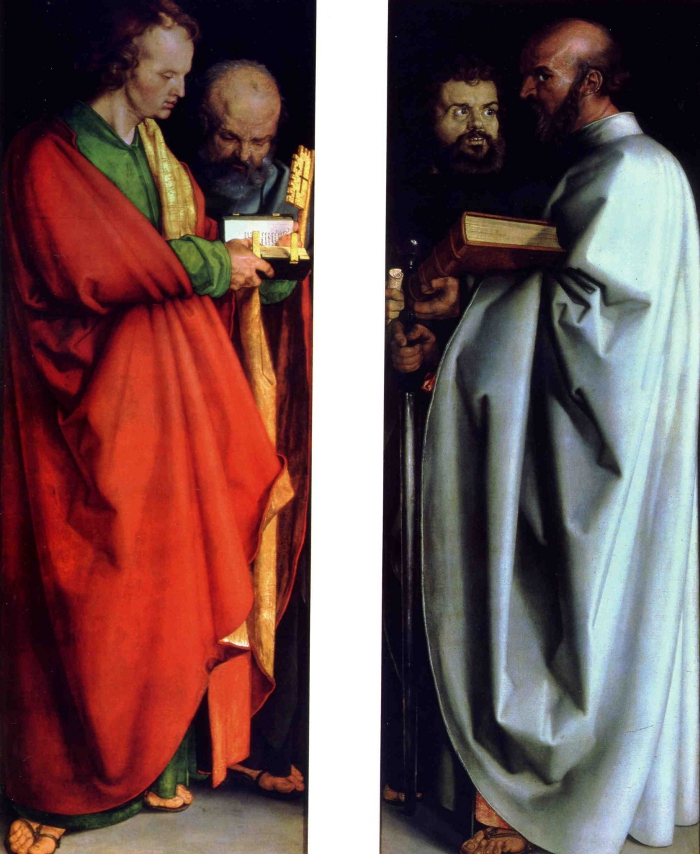 The influence of Italian art is apparent in the Adoration of the Magi (above) ( Uffizi Florence). The contrasts of reds, greens and blues are a delight while the perspective of the buildings fixes the figures firmly into the landscape.

The lessons from Italy are incorporated into the Renaissance of the North.

Four Apostles was painted as a gift to the city of Nuremberg. From left to right the Saints are - John, Peter, Paul and Mark. 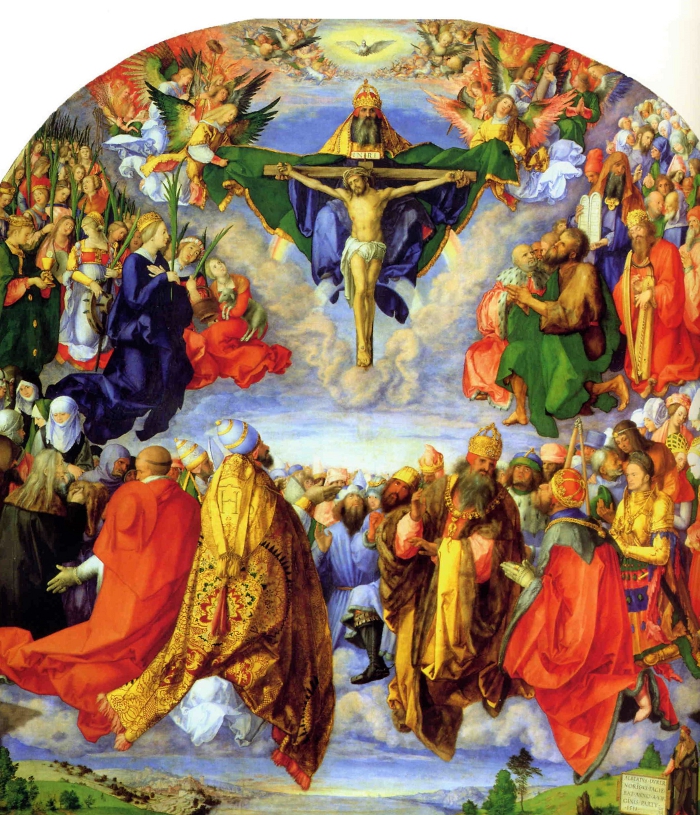 His Adoration of the Trinity is composed of multi-layered figures including kings, popes, saints and peasants all floating on clouds as they praise the images of Christ, God the Father and the Holy Spirit. The perspective of the painting places the viewer at the same high level above a landscape that includes a self-portrait of the artist at the bottom right of the picture.

From 1512, Maximilian 1, Holy Roman Emperor, was the artist's major patron. He received several commissions from Maximilian including a vast woodcut, The Triumphal Arch, he also painted many portraits of the Emperor including one shortly before Maximilian's death in 1519.

In his later years Durer worked on several projects with religious themes but because of his failing health, many of these projects failed to materialise. Albrecht Durer died in his native Nuremberg in 1528 at the age of 56.