Domenico Ghirlandaio was born in 1449 under the birth name of Domenico di Tommaso di Currado Bigordi (quite a mouthful). His father traded as a goldsmith and was given the name "Ghirlandaio" or garland-maker in honour of a specific fashion he started.

Domenico was apprenticed to a goldsmith and then to Alessio Baldovinetti to study painting.

He painted a large number of frescoes in various Florentine churches and in 1481 he was one of several painters summoned to Rome with the task of decorating the Sistine Chapel. He painted his "Vocation of Peter and Andrew" on the right wall of the Chapel.

The artist was very skilled in the art of fresco painting and it was in his workshop that the young Michelangelo was taught the technique of painting and draughtsmanship.

Ghirlandaio depicted sacred scenes in a pleasant manner as if they had just happened among the rich and famous of Florentine society. Eventually, he became so overwhelmed with commissions that he could only complete his works with the help of assistants from his formidable workshop. These works mirrored the life of the period and also pleased his Medici patrons.

He painted a life-sized Last Supper in the refectory of the Church of Ognissanti in Florence and also Saint Jerome in His Study both in 1480. 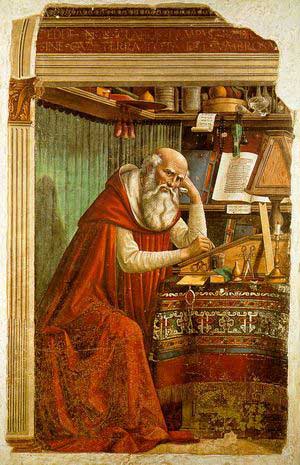 Saint Jerome in his Study, 1480. Church of Ognissanti, Florence. (w) 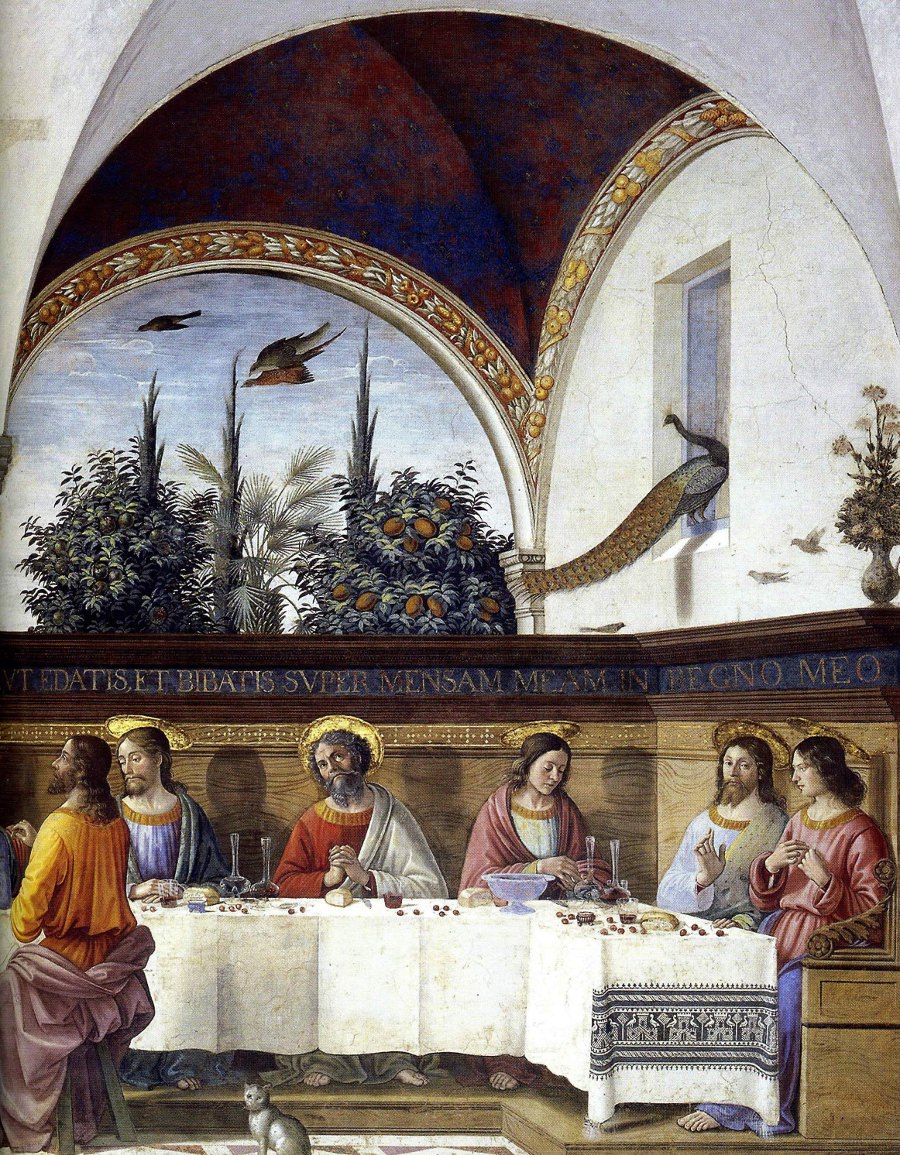 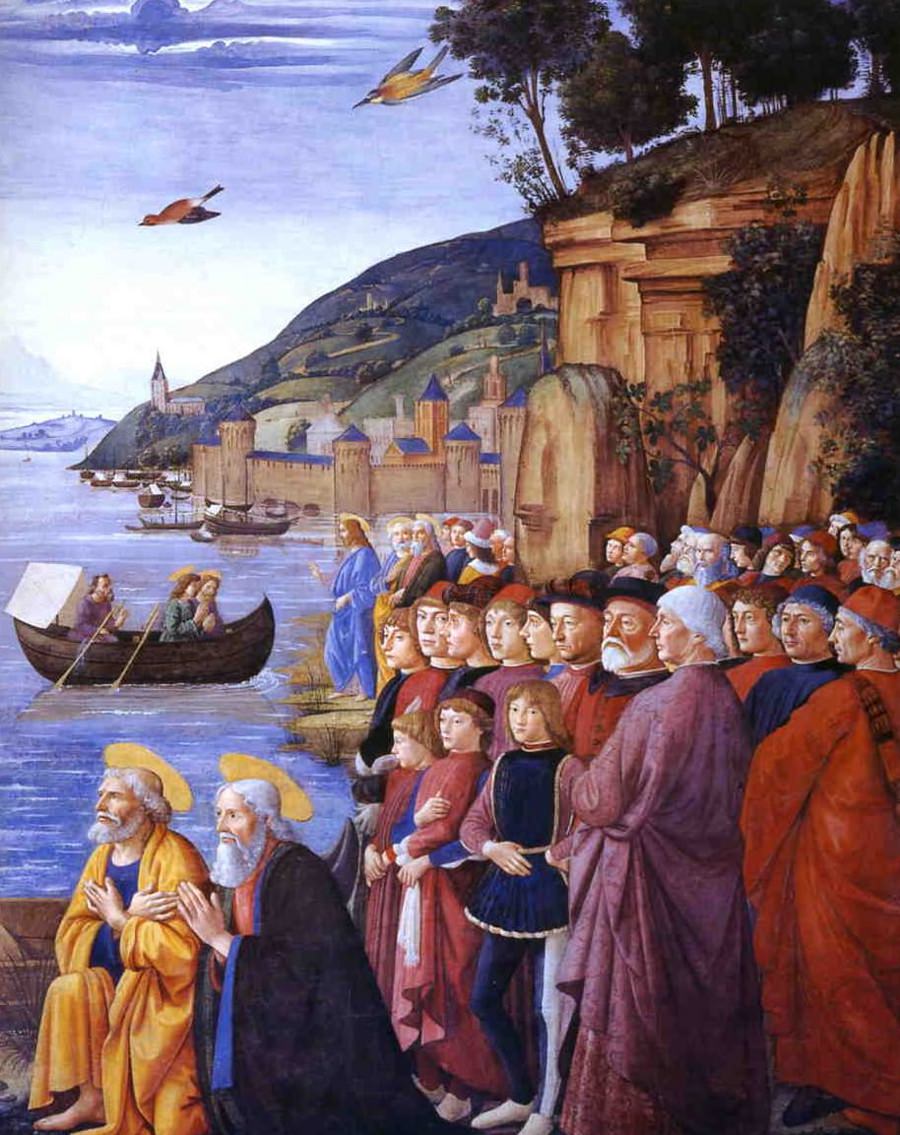 Ghirlandaio was one of several artists who were chosen to decorate the walls of the Sistine Chapel. Sandro Botticelli, Cosimo Rosselli, and Pietro Perugino are other notable contributors.

Ghirlandaio’s Vocation of Peter and Andrew who were brothers shows the pair kneeling before Christ. Christ also appears in the background calling out to John and Jacob to come to him. They seem happy to comply as they sail their boat to the shore.

Ghirlandaio in the Sassetti Chapel, Florence.

The banker Francesco Sassetti commissioned Ghirlandaio to paint frescoes in the Sassetti chapel in the church of Santa Trinita in Florence. This is considered to be the artist's masterwork. The theme is the life of St Francis. 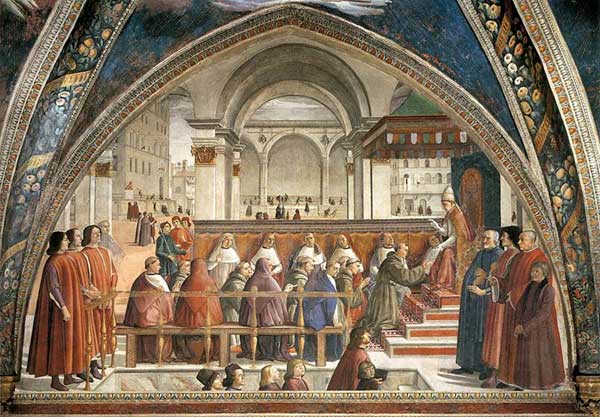 The Confirmation of the Franciscan Rule. (w)

This painting contains several of the artist's patrons and includes:- On the right, in the foreground, are Sassetti's brother-in-law, the Gonfaloniere di Giustizia Antonio Pucci; Sassetti's employer, Lorenzo de' Medici; Francesco Sassetti himself and his son Federico. 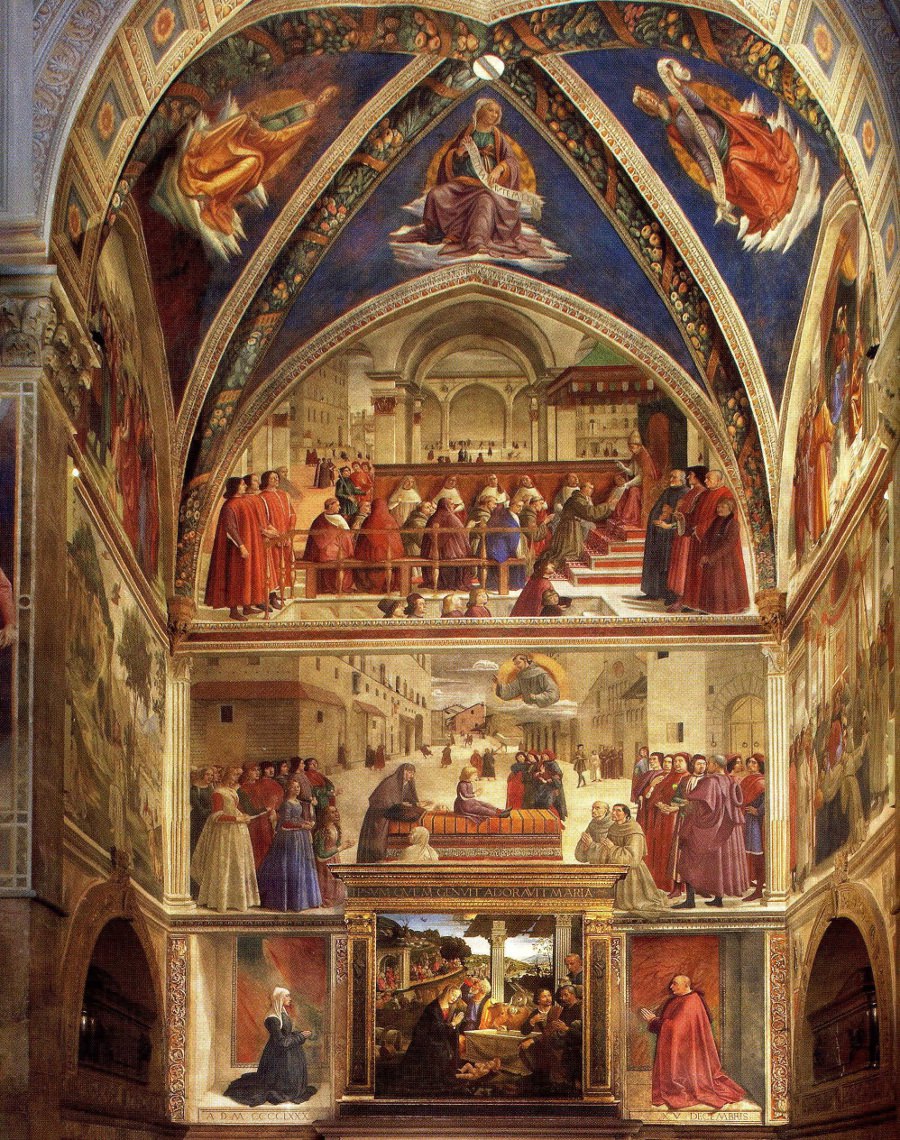 In these multiple scenes, the "Adoration of the Shepherds" (shown below) can be seen in the lower centre of the Altar.
The top centre image is "The Confirmation of the Franciscan Rule"(as seen above).
The kneeling figure in the red robe is the patron, Francesco Sassetti. 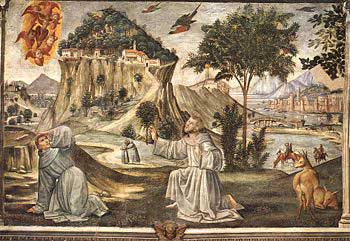 The Stigmata of St. Francis. (w) 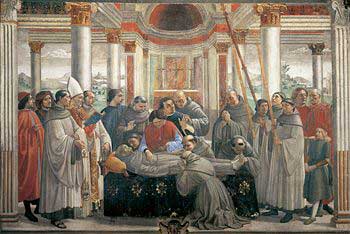 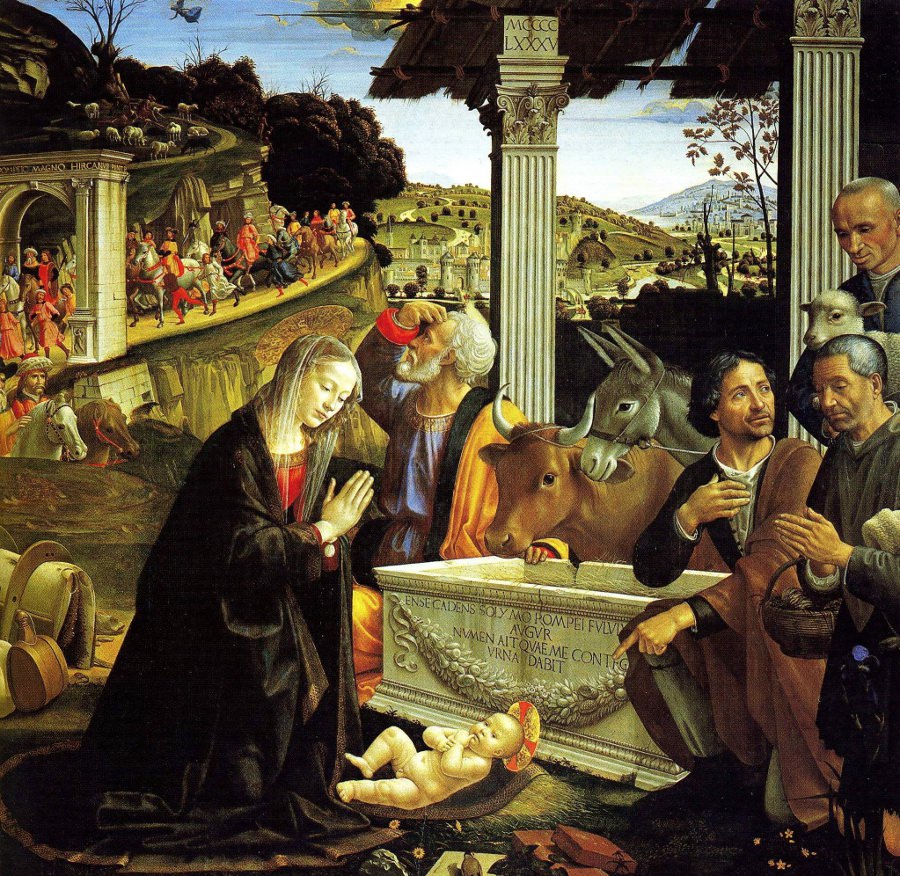 The Adoration of the Shepherds. (s)

This is the altarpiece and is one of the artist's greatest works, it is also my personal favourite. The shepherd on the right in the red clothing is a self-portrait of the artist.

Ghirlandaio’s paintings often present us with numerous figures, mostly of Florentine citizens. The background of the Adoration of the Shepherds is one example of his use of this device in his work.

A procession of courtiers’ snake down a winding path that leads from a hilltop, through an architectural archway to the scene of the main event, the Adoration.

Mary kneels before a trough where a cow and a donkey stand. On the right of the painting two of the shepherds pray before the Christ child the other points down at the miracle before him. Only Joseph seems unmoved as he gazes up towards the line of approaching worshippers.

The subject of his work was predominantly religious with portraits of the donor and his family and friends. Examples of this type of work can be seen in the church of Santa Maria Novella in Florence. 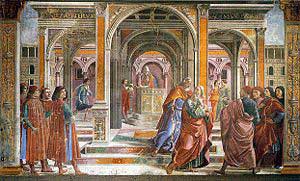 The Expulsion of Joachim from the Temple. (w) 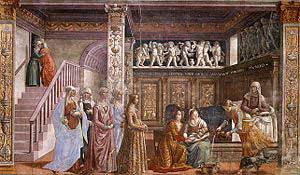 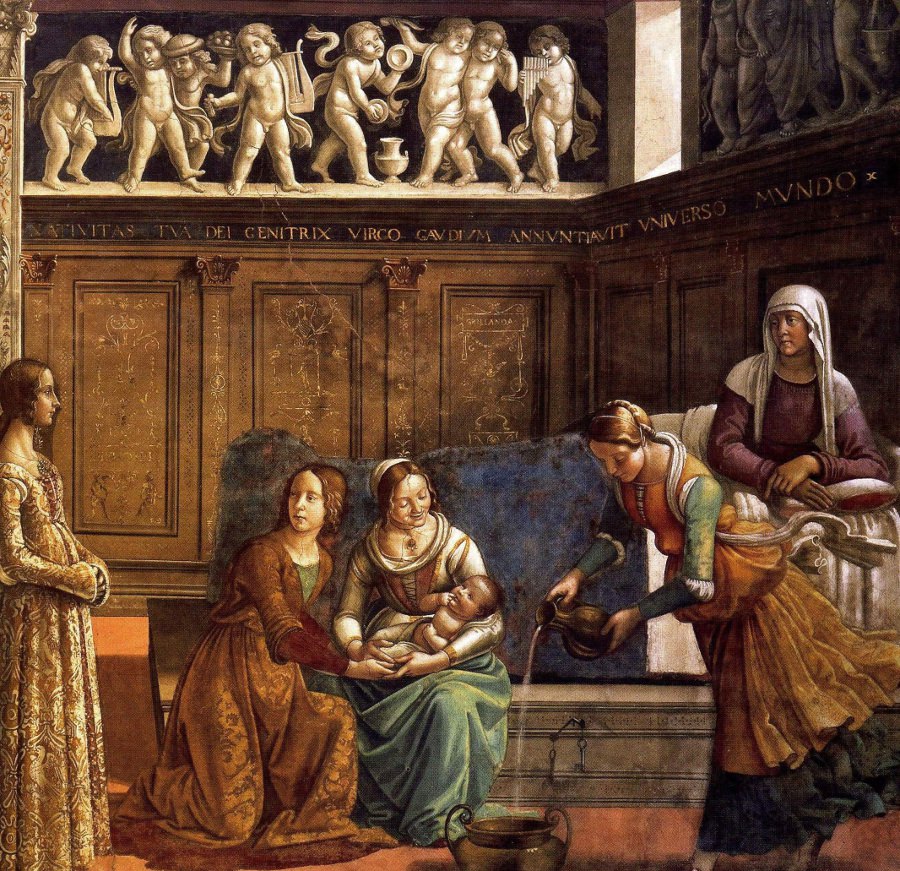 The Birth of the Virgin (Nativity) detail. (s)

In contrast to the usual Biblical depictions, The Birth of the Virgin takes place in a typically grand Renaissance household set against a finely painted architectural backdrop. A maid cradles the child as a young woman pours water into a wash pot.

The central figure, shown kneeling with one hand on the young Mary, is the work's patron Ludovica Tornabuoni. The religious subject seems to fade into the background as Ghirlandaio delights in the splendour of his decorative, contemporary, everyday Florentine masterpiece

Domenico Ghirlandaio was undoubtedly one of the foremost fresco painters of the Renaissance. Successful and admired in his lifetime his legacy is immense. Ghirlandaio died (probably of a fever) on January 11th 1494. He is buried in Santa Maria Novella.