The Italian painter and architect Giorgio Vasari is more famous for his biographies of Italian artists than any of his own works. The importance of his written work cannot be overestimated and it is largely due to Vasari that we have such a wealth of information about the artists of the Renaissance.

Vasari was born in Arezzo in Tuscany in 1511 and became a pupil of the stained glass painter Guglielmo da Marsiglia. He enjoyed a humanist education in the circle of Andrea del Sarto a high Renaissance painter who was rather over-shadowed by Raphael.

He was befriended by Michelangelo whose style had a considerable influence on his own. Vasari was in Rome in 1529 and studied the work of the High Renaissance artists of the period. His own Mannerist paintings were admired in his lifetime but have not stood the test of time.

He worked in Florence and Rome, and also in Naples, and was constantly employed by those great patrons of the arts, the Medici. 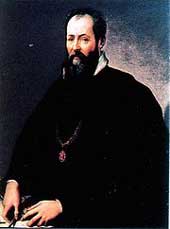 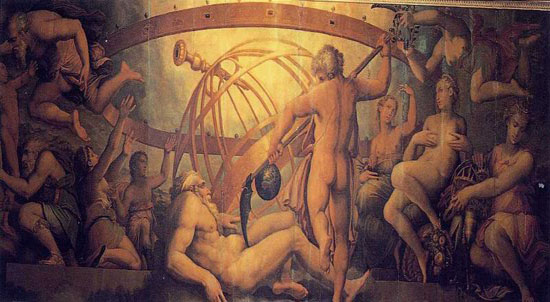 Vasari was very wealthy and built himself a house in Arezzo, this is now a museum dedicated to his life, he died in Florence on 27th June 1574.

If we were to talk about Vasari in terms of his paintings he would be placed under the heading of the High Renaissance or Mannerism, but he belongs at the beginning of the Renaissance purely because of his work as the first Italian art historian.

This work is considered a classic, but it does suffer from a lack of research and some of his dates and attributions have been corrected by subsequent historians. Despite this, the work is still considered to be the single most important text for the history of the Renaissance.

The Lives of the Most Excellent Painters, Sculptors, and Architects, (full title) was first published in 1550 in Florence and was dedicated to Grand Duke Cosimo I de' Medici. It was very biased towards Florentine artists but included information on the technical methods used in the arts of the time.

The work was rewritten in 1568, by this time Vasari had visited Venice and the second edition gave more weight to Venetian art and, at last, included Titian.

Giorgio Vasari's legacy is that he inspired many more writings on art history both in Italy and in other parts of Europe, he has given us an invaluable insight into some of the greatest artists in history.