Andrea Mantegna was born about 1431 in the Republic of Venice. The son of a carpenter he grew up in Padua. At the early age of eleven, he became the apprentice of Francesco Squarcione an archaeologist, painter, and dealer in antiquities. 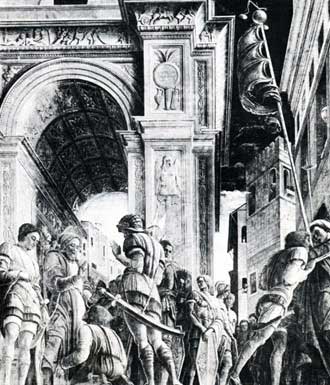 "St. James led to his Execution." (s) Only photographs exist of this work, it was destroyed during the allied bombing in WW2.

Squarcione's workshop was famous throughout Italy and it was here that his young pupil studied Roman art and sculpture. The artist's main influences at this time are Donatello and classical sculpture.

Squarcione was quite a prickly character and he soon fell out with his precocious young pupil, and the apprenticeship finally ended in a violent argument and a lawsuit.

Andrea was known to be working on frescoes for the Ovetari Chapel in 1448 when he was only seventeen but this work was almost destroyed in a bombing raid in 1944.

In this series of paintings, the use of his worms-eye view is very evident in the St. James led to his Execution, and is a good example of the artist's understanding of perspective.

In 1454 the artist married Nicolosia the daughter of Jacobo Bellini and so became the brother in law of the painters Giovanni and Gentile Bellini.

Between 1456 and 1459 Andrea painted a triptych for the altarpiece of San Zeno the main church of Verona. 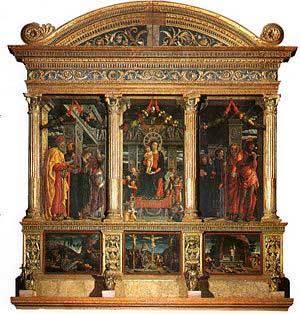 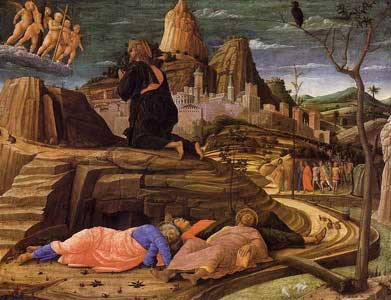 "The Agony in the Garden" From "The San Zeno Altarpiece" (w)

In 1460 Mantegna left Padua and settled in Mantua where he was appointed court painter to the Gonzaga family. (Ludovico Gonzaga was the ruler of the city of  Mantua from 1444 to his death in 1478.) He painted the Camera degli Sposi, the bridal chamber, a cycle of frescoes from 1465 and completed in 1474. 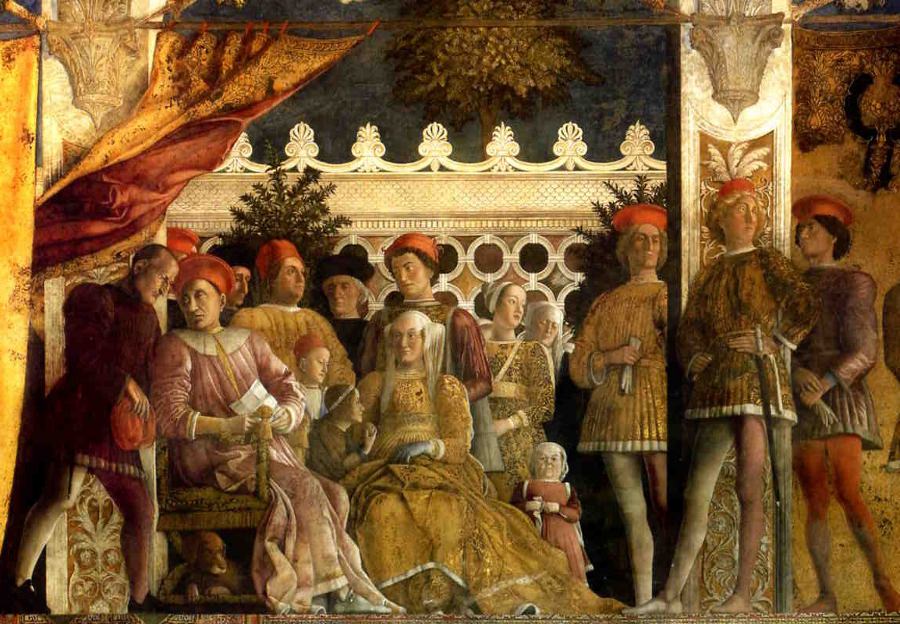 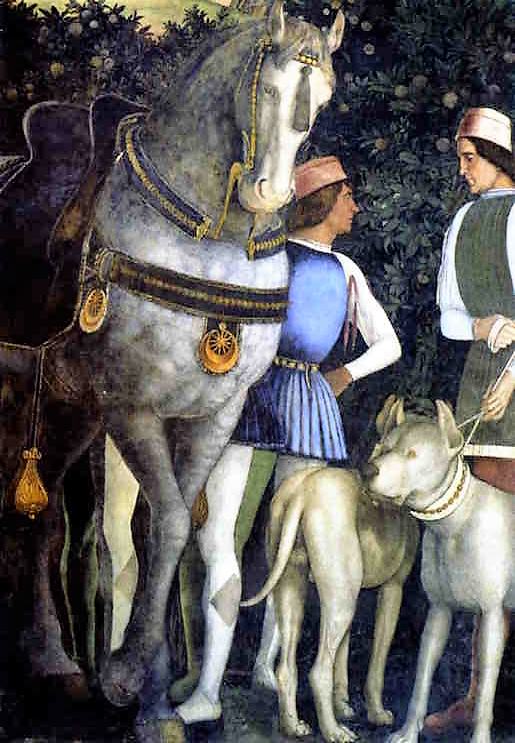 Retainers with horse and dogs. (s) 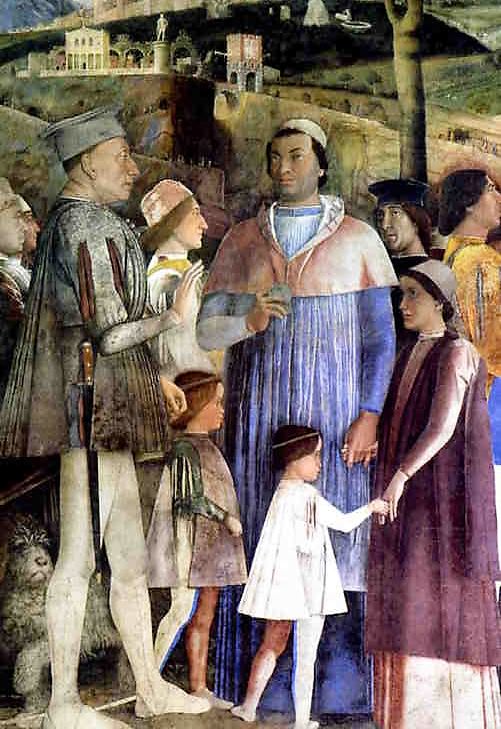 The court scene is on the west wall of the bridal chamber. It shows Ludovico Gonzaga with his wife Barbara of Brandenburg along with several family members. 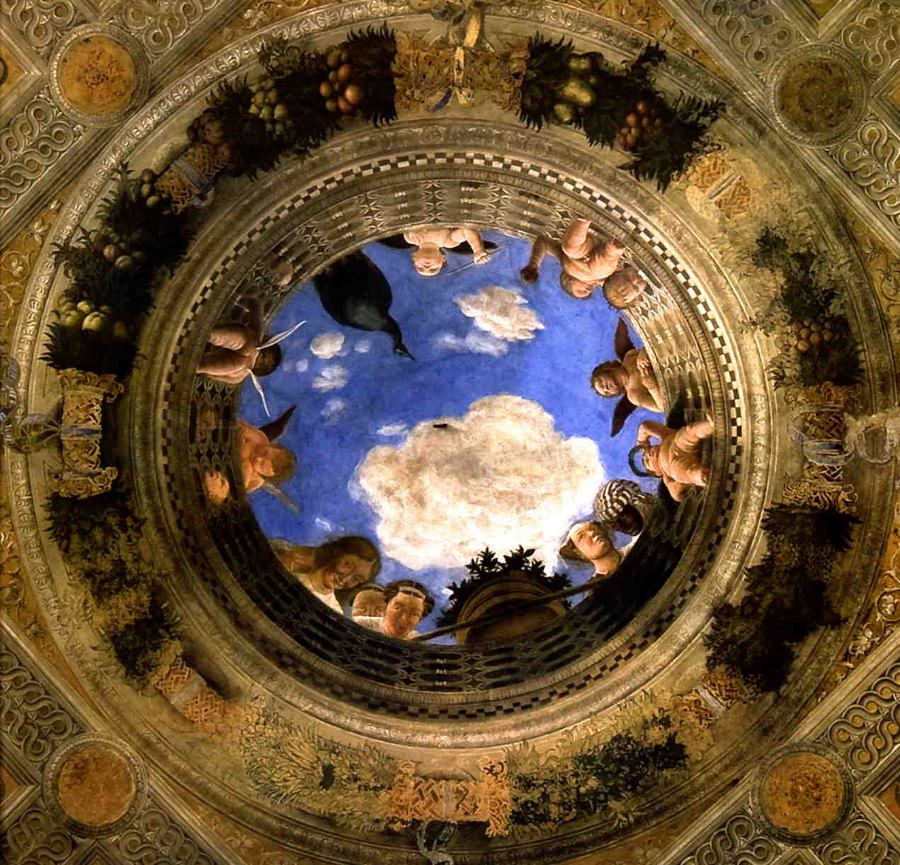 Note how Mantegna has used his knowledge of perspective and foreshortening to create the illusion of a three-dimensional image on the flat two-dimensional surface of the ceiling. Viewed from below (as in the image above) the artist has used his skill to punch a hole through the ceiling to the open sky above.

This is a particularly fine example of di sotto in sù (seen from below).

Mantegna’s frescoes likely relate to a previous wedding ceremony that had previously taken place in the same chambers. An ancient custom dictates that marriages had to take place beneath an open sky.

Andrea‘s clever ceiling painting representing a view of the heavens was an alternative. In what was the first painting in Europe to create an illusionistic vision within an enclosed room the artist has superbly interpreted an age-old custom. 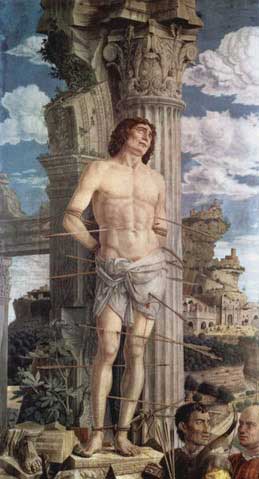 Andrea's fascination with St Sebastian is evident, he painted the subject several times with versions in Vienna, Paris, and Venice.

The version in the Louvre is by far the largest of the three Sebastian's. I love the two guys chatting in the bottom right corner. They are walking past the scene of the martyrdom in a nonchalant manner and could almost be on a Sunday stroll.

Only the bow and arrows suggest that they are indeed executioners!!! 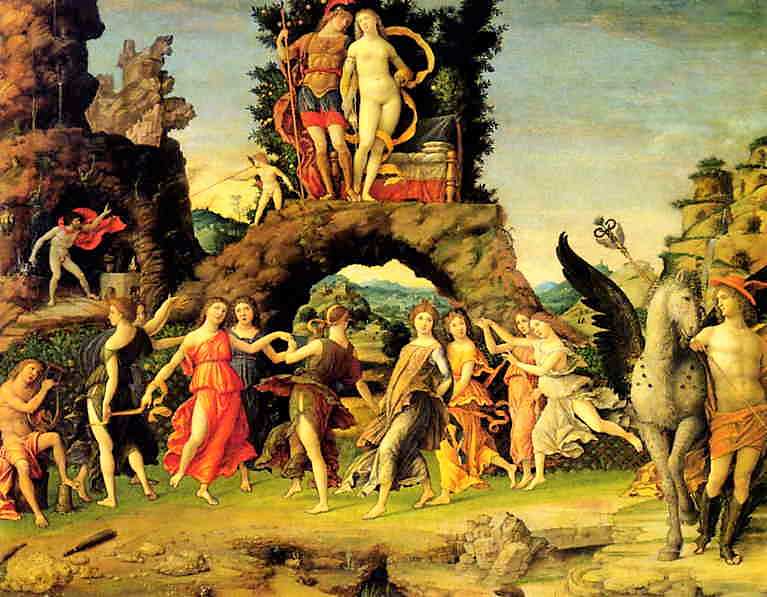 Parnassus was created to decorate the rooms of Isabella d’ Este. The painting similarly represents scenes from classical mythology to Botticelli’s famous works, Primavera and Pallas and the Centaur.

Above a rocky hollow stand Venus and Mars, indicating symbolic love. At the side of Mars, Cupid fires a dart at Vulcan to quell his jealousy.

Just below Vulcan, a musician strums on the lyre while a group of Muses is dancing to the rhythm of the music. To the right of the painting, Mercury stands to hold the winged stallion Pegasus and so completing the mythological line up of characters.

The Adoration of the Magi. 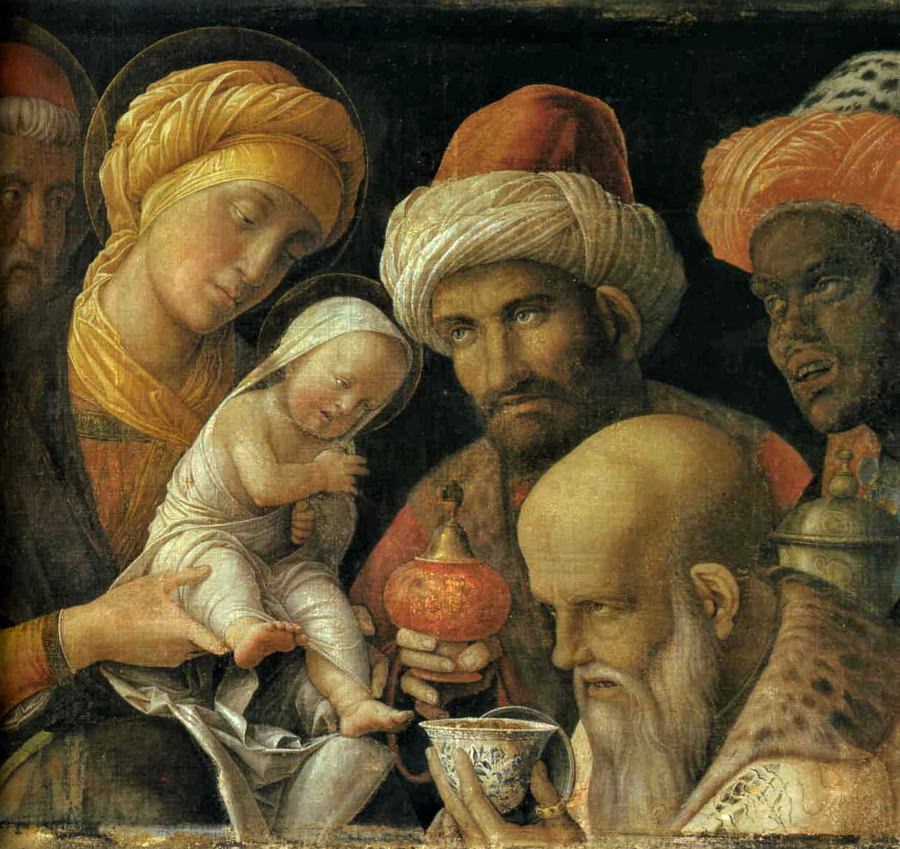 The Magi are dressed in fine clothing in contrast to the simple attire worn by Mary and Joseph. The Christ Child, Mary, and Joseph have haloes while the three kings are bejewelled and bear fine gifts. 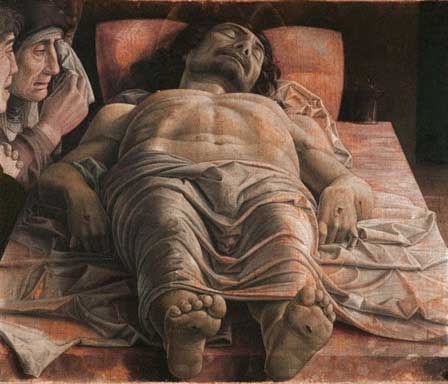 Mantegna was something of a recluse in his later years, although he continued to paint despite his ill health. The most famous and dramatic of his perspective effects are found in his "Cristo Scorto" (The Dead Christ) found in his studio after his death on September 13, 1506.

Note the extreme foreshortening of the body of Christ and the almost metallic quality of the clothing, typical Mantegna traits. 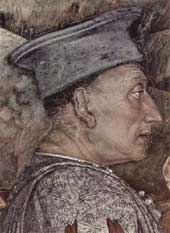