The Musician.
Leonardo's Portrait of a Young Man.

Wooden, unfinished, and not by Leonardo are some of the negatives used to describe the portrait known as the Musician.

Without a doubt parts of the picture are far from completion, the lapels of the man’s coat are mere washes of brown under-painting.  Also, the black body with a white flash on the chest appears quite crude.

The sitter’s identity has long been a subject of debate, even a family member from the court of Milan has been suggested as the sitter. In fact, the painting was originally catalogued as ‘A Duke of Milan’.

The sheet of music in the young man’s hand was only rediscovered, hidden underneath over-painting, in 1905. This prompted scholars to investigate musicians of the time.

Franchino Gaffurio, Josquin des Prez and Atalante Migliorotti. Gaffurio is now thought to have been too old at the time when the portrait was painted, as was Prez. Migliorotti is perhaps the frontrunner, however, the debate still rages.

When Leonardo first entered the service of the Duke of Milan it was as a teacher of music (yet another of his many skills).

Is the painting by Leonardo?

Again speculation about the artist who actually painted this portrait has been fluid to say the least. Because of the disjointed, unfinished appearance of the work, it is possible that some of the artists from Leonardo’s workshop had a hand in the painting. Ambrogio de Predis and Giovanni Antonio Boltraffio are prime candidates.

The painting, like so much of Leonardo's work, is unfinished and the stiffness of the composition has led some to speculate on the attribution of the work to Da Vinci. The painting has, at various points in history, been attributed to Leonardo's workshop or perhaps to a pupil in collaboration with the master.

However, the majority of experts now believe that the work is by Da Vinci. 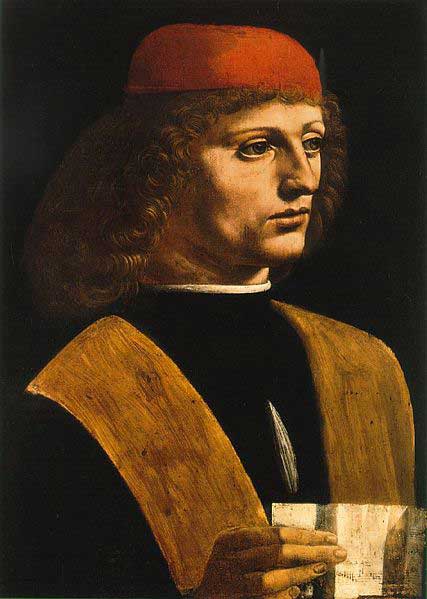 Leonardo has broken with the traditional portrait painting of the period. Portraits of the Court of Milan posed the sitter in profile but Leonardo has given his musician a three-quarter view.

This break with tradition, so familiar to our eyes, had an immediate and lasting impact on the previously conservative artistic preferences in Milan.

The face of the sitter is the most complete part of this painting. Leonardo has given his sitter depth As he gazes out beyond the confines of the picture the musician possesses a facial expression, so unlike the portraits of the day that he is immediately readable as a real person.

In his hand is a manuscript containing a musical score adding further evidence for the identity of the sitter being one of the musicians of the time.