For Titian mythological paintings became important as a set of commissions from powerful and influential patrons. His first works were the set of paintings he made for Alfonso d’ Este, Duke of Ferrara which includes Bacchus and Ariadne, but possibly his most ambitious series was for the Spanish king, Philip II.

Titian began painting Diana and Actaeon and Diana and Callisto as a pair in 1556, spurred on by royal patronage the artist produced these masterpieces over a three-year period. When the works were shipped to Spain in 1559 Titian explained the delay in a letter to the Spanish king, ‘the ardent desire that I have to do things that are worthy of your Majesty’. 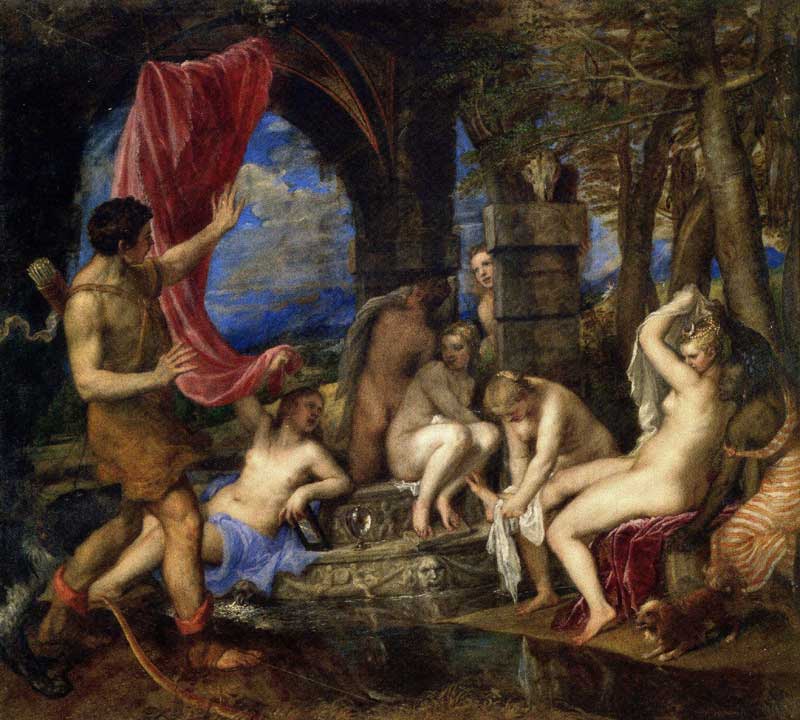 The story of Diana and Actaeon is taken from the Roman poet Ovid’s Metamorphosis.

A hunter (Actaeon) is separated from his stag hunting friends and stumbles on Diana the goddess of the hunt. Diana is seen refreshing herself by a grotto in the company of her virgin nymphs. Actaeon is startled by the array of nude young women that he has inadvertently disturbed.

He raised his arm in shock as the nymphs attempt to cover their nakedness while the goddess casts a menacing glance at the young hunter as her handmaiden attempts to cover her with a shift.

At Diana’s feet, a dog yaps at the intruder and a nymph peeps out from behind a pillar at the handsome hunter.

Titian’s uses colour contrasts to expertly harmonise the picture. From Actaeon’s vermilion boots to the lush blue and red drapery of the nymph in the foreground to the deeper scarlet of Diana’s robe the artist has created a perfectly balanced masterpiece. 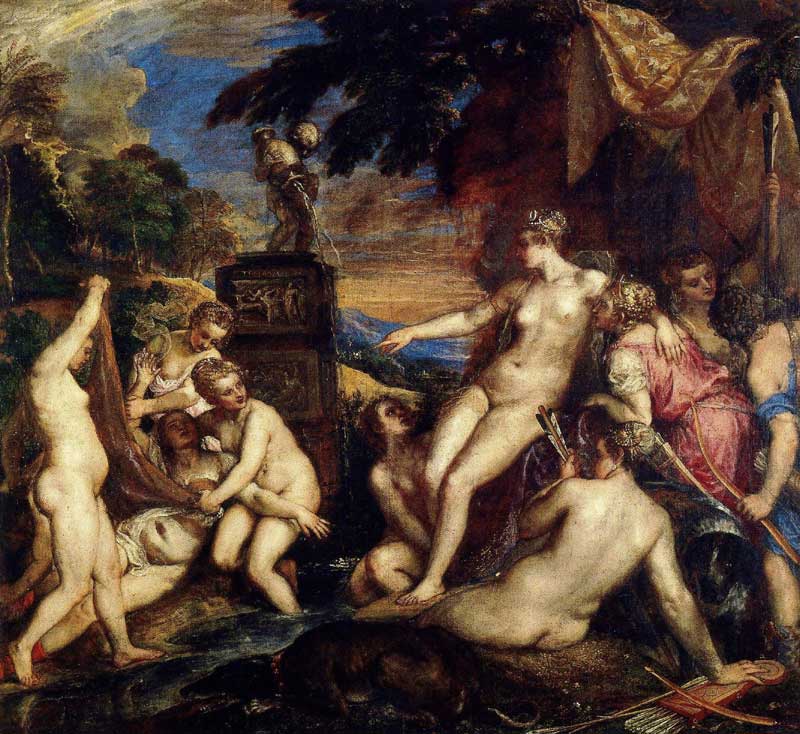 Callisto was a favourite maid of the goddess Diana. Jupiter, who was smitten by the maid’s beauty, seduced her by transforming himself into Diana.

Titian’s painting shows the moment that Callisto’s pregnancy is discovered when she is forced to bathe with the other nymphs. Diana points an accusing finger as Calliaso’s pregnancy is revealed.

Titian has again set the drama against a powerfully painted sky and features an array of naked female figures, their white flesh contrasting with the darker areas of the composition. Banished by Diana Jupiter, Callisto’s seducer, later transformed the nymph into the constellation of the great bear.

This painting was intended as a companion piece to Diana and Actaeon. 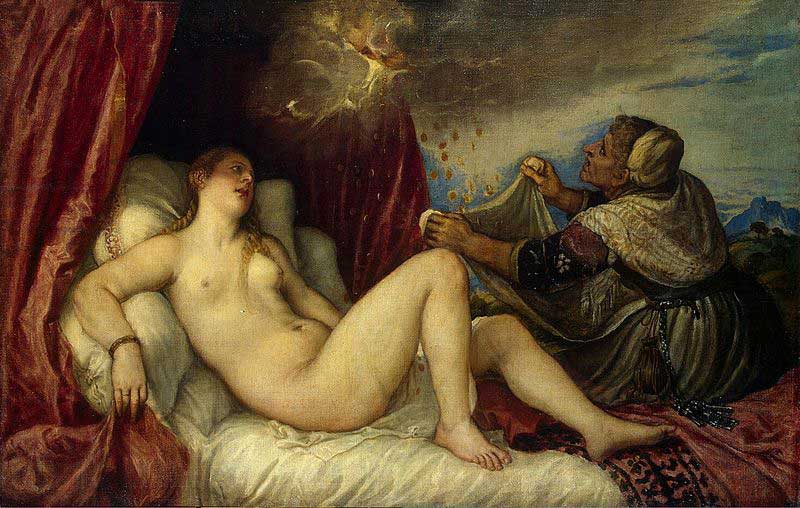 The mythological princess Danaë was a daughter of King Acrisius of Argos. Because of a prophecy stating that Acrisius would be killed by his daughter's son he imprisoned Danaë in a bronze tower.

Zeus seduced her in the form of a golden rain and impregnated her. Sometime later Perseus their son was born.

Years later the prophecy came true when Perseus accidentally killed Acrisius with a discus. Titian has depicted Danaë, reclining naked on a bed, she is attended by a nursemaid, her legs parted ready to receive the golden rain.

The Death of Actaeon. 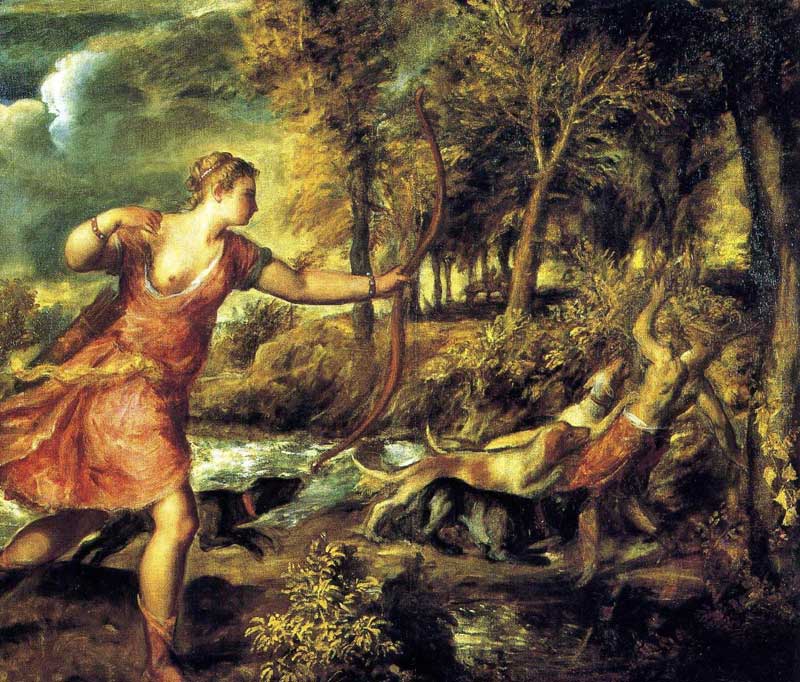 As a punishment for disturbing Diana and her nymphs as they bathe, the goddess turns Actaeon into a stag. The unfortunate hunter then becomes the hunted, he is pursued by Diana and is eventually torn to pieces by his own hounds.

Titian has depicted Diana in full flow with bow drawn and her tunic flying. Actaeon is shown as a half-man half-stag figure in the moment of his capture by the hounds. The Death of Actaeon was never finished and remained in Titian’s studio at his death. 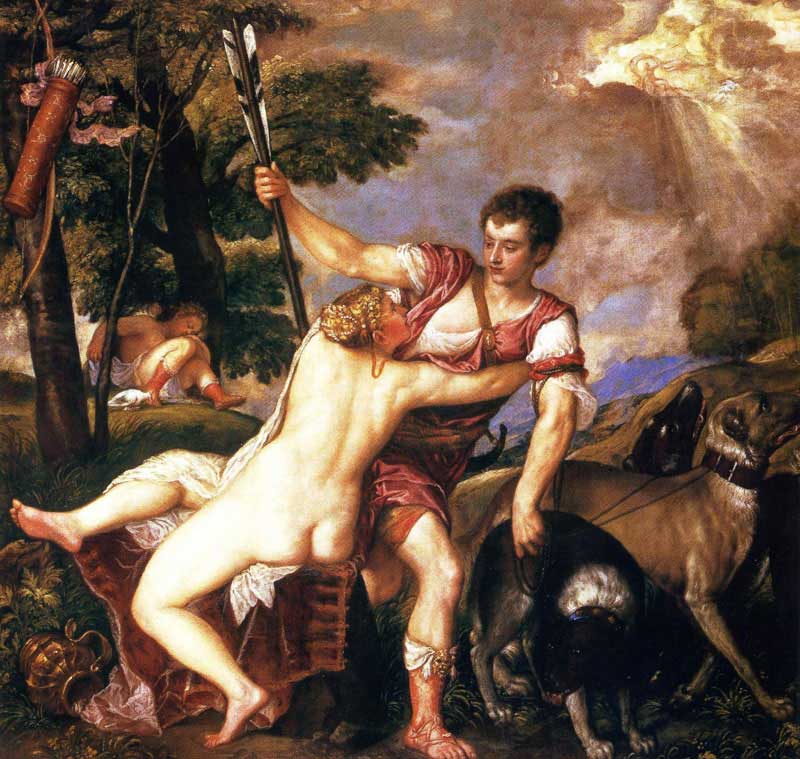 The first version of this painting was damaged on it’s delivery to King Philip II, this is the artist's replacement work.

Adonis, the Greek god of beauty and desire, is leaving at dawn with his dogs, to join a hunting party. Venus, the goddess of love, clings to Adonis in a desperate attempt to keep him with her. The picture symbolises that the call of the hunt is stronger than that of love.

The Rape of Europa. 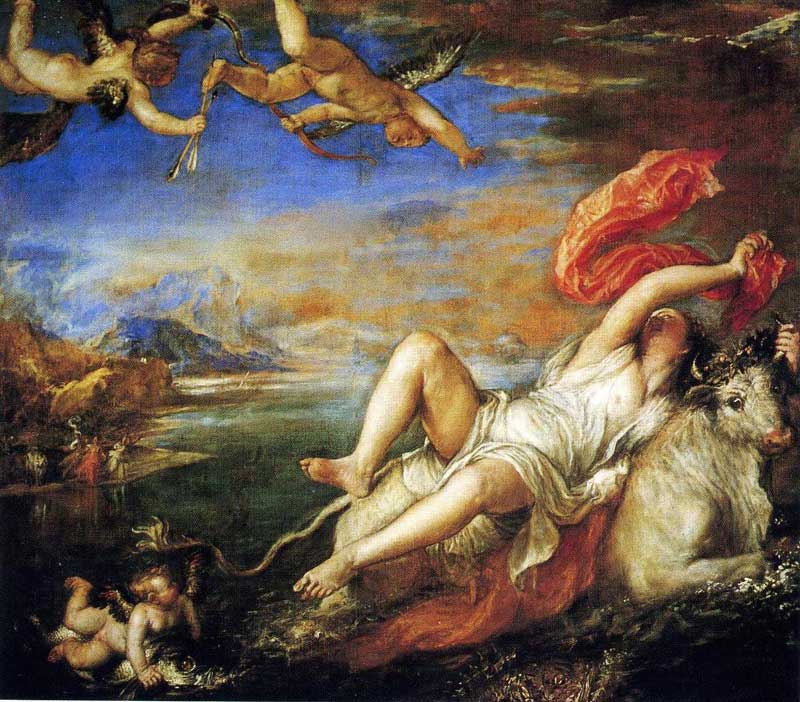 Titian’s dramatic painting the Rape of Europa is set in a richly coloured landscape. Europa is depicted in a diagonal pose balanced on the back of a bull.

In Roman mythology Jupiter is in love with the princess Europa, determined to seduce her he transforms himself into a white bull and mingles with her father’s herd. When the princess climes upon the back of the bull she is whisked away into the sea.

Jupiter (the bull) swims to the island of Crete and consummates his lust. Europa became the first queen of Crete and the continent of Europe is ultimately derived from her name.

Jupiter recreated the shape of the white bull as the constellation Taurus.

The mythological paintings produced by Titian are a small part of the work that he completed during his long lifetime. When he started his great series for Philip II, (who was at that time the most powerful ruler in the world), the artist was almost seventy years old.

These spectacular works have been admired by generations of art lovers and have inspired many of the artists who followed Titian’s fine contribution to Western art.