The Venetian artist Paolo Cagliari, known as Veronese after his birthplace in the city of Verona, was born in 1528. His father Gabriele was a stonecutter by trade and by the age of fourteen his son was apprenticed to a local artist Antonio Badile. The talented young Paolo began to develop his own style including a lighter and more colourful palette. He left Badile's workshop in 1543.

The artist then moved to the city of Mantua in the province of Lombardy and completed frescoes in the city's cathedral. He arrived in Venice in 1552/53 and it is in Venice and the surrounding regions that he created his most memorable works.

Titian was the established master in Venice but his later contemporaries included Tintoretto and of course, Veronese. Paolo decorated the Sala dei Consiglio dei Dieci and the Sala dei Tre Capi del Consiglio.

His ceiling paintings for the Doge's Palace and the Marciana Library established him as a master of Venetian painting. He was even awarded a prize for his work by the famous Titian.

The architect Andrea Palladio had completed a villa for the Barbaro family in Maser, and Paolo was invited to decorate the villa with frescoes. The decoration included portraits of the Barbaro family, with the ceilings painted with mythological figures. The work is the artist's most important fresco cycle and was a great success for both artist and architect.

The Marriage at Cana.

The monks of the San Giorgio Maggiore Monastery in Venice commissioned Veronese to produce a huge painting The Marriage at Cana. The work began in 1562 and was completed barely a year later in 1563.

The story of the wedding feast, The Marriage at Cana, comes from the New Testament. It tells of Jesus and his disciples attending a wedding at Cana in Galilee. Jesus commanded the servants to fill jugs with water and he then performed his first miracle:- turning the water into wine. 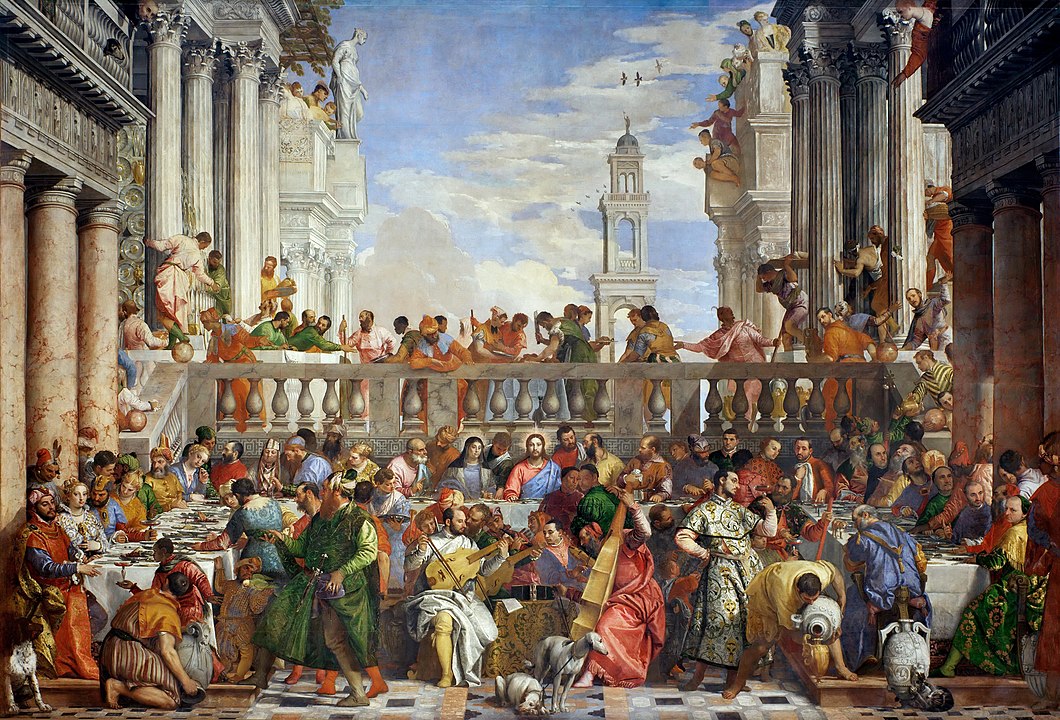 This work contains more than 130 figures some of the famous personalities of the day, they include: Eleanor of Austria, the emperor Charles V, Mary of England and Vittoria Colonna. The place of honour is taken by the musicians in the foreground: Veronese painted himself playing the violoncello, Titian is on the double-bass, Tintoretto at the viola and Bassano playing the flute.

The painting hung in the San Giorgio Maggiore Monastery for over 200 years before it was stolen by Napoleon in 1797. During World War II the work was rolled up and moved around France in the back of a truck to save it from being looted (for the second time) by the Nazi's.

2007 was the anniversary of the looting of the painting by Napoleon's troops. Some 210 years after the work was stolen a computerised facsimile was hung in it's original place in the Palladian Refectory.

Veronese' Marriage at Cana still resides at the Louvre.

This painting is a perfect example of the reason that I encourage readers to see art in the flesh. It's impossible to fully appreciate a work of this size (30ft in length) from an image in a book or on a website. If you can imagine the figures in the foreground being life-size then you may have some idea of the scale of the painting.

Seeing this in the Louvre also highlights the amount of detail that Veronese has lavished on the picture, the rich colours that he used are a part of the artist's trademark characteristics.

An amazing work of art.

Alexander and the family of Darius.

Between 1565 and 1570 Veronese painted another of his monumentally large works. Alexander and the family of Darius depict the Persian king Darius before Alexander the Great after the battle of Issus.

The painting is once again rich in colour but is more decorative than The Cana work with less depth. This is emphasised by the parallel column of architecture that forms the background to the work. 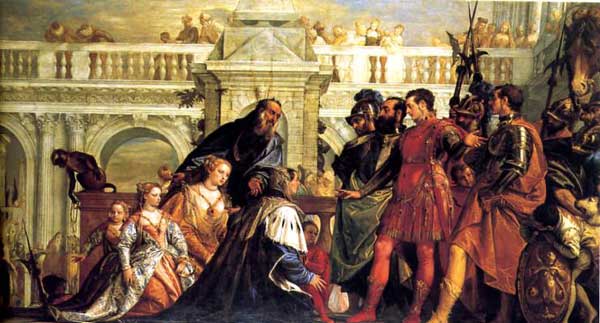 Alexander and the family of Darius. 1570. National Gallery London. (s)

Veronese married Elena Badile in 1565. She was the daughter of his first master Antonio Badile and it would seem that the artist's personal life was a happy one the union produced four sons and a daughter.

The Feast in the House of Levi.

His painting for the Basilica di Santi Giovanni e Paolo, The Last Supper, contained not only the Biblical scene but exotic dwarfs and soldiers in addition to an array of animals. This was typical of the narrative quality associated with his paintings.

The work was completed in 1573. However, the inquisition summoned Paolo to explain his inclusion of the exotic within the context of a religious picture. The artists solution to this tricky problem was to simply rename the painting and it is now known as the Feast in the House of Levi. 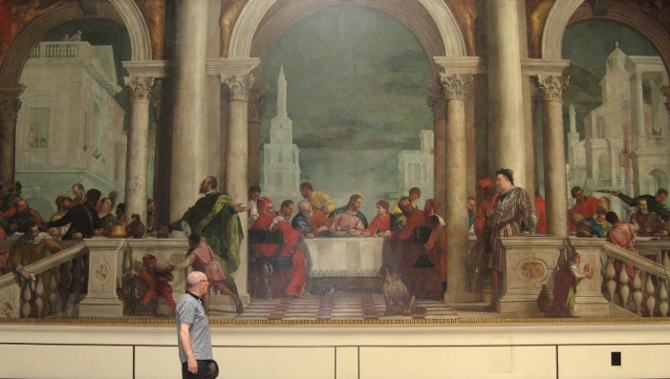 This photograph of the painting, taken in the Accademia Galleries in Venice, gives some indication of the huge scale of this masterpiece. The figures are life-size as emphasised by the art lover (me) who views the work from a distance of no more than a few feet. 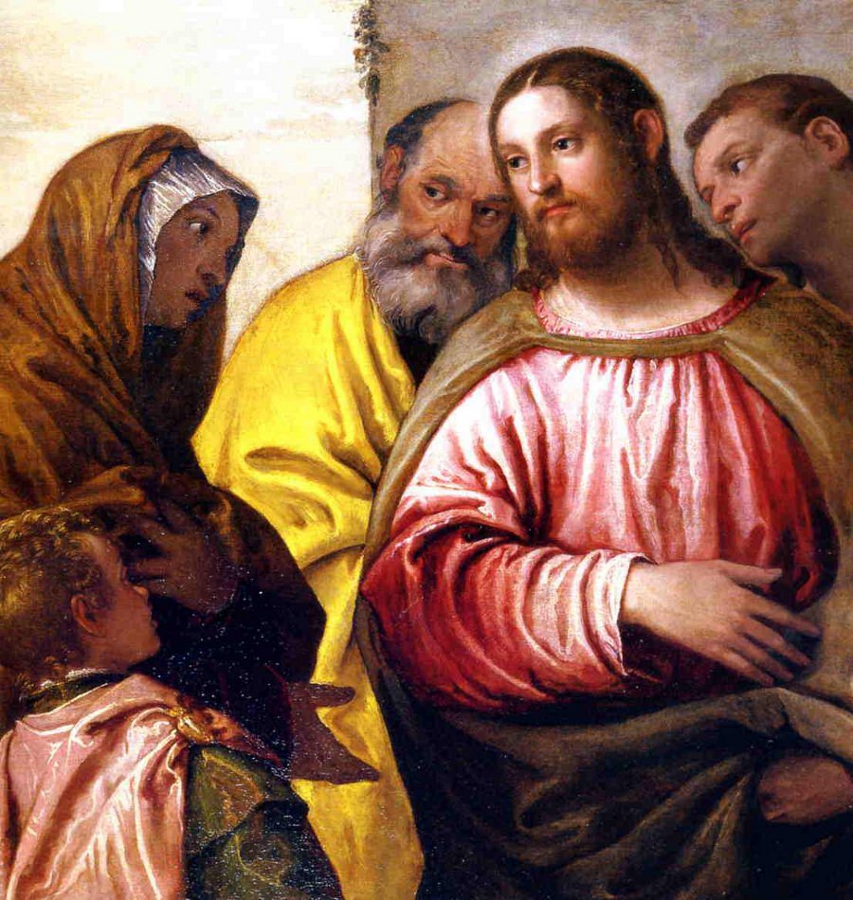 Crist and the Widow Nain/Woman Taken in Adultery. (s) 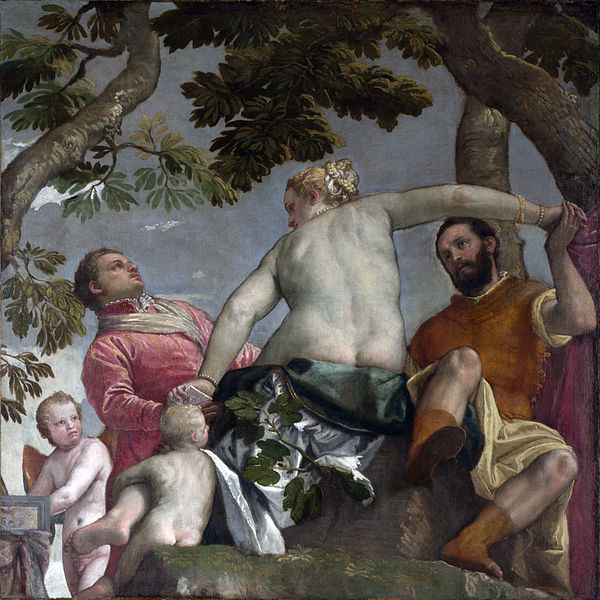 This is the first of a set of four paintings produced by the artist exploring the allegory of love. All four can be seen in the National Gallery in London. 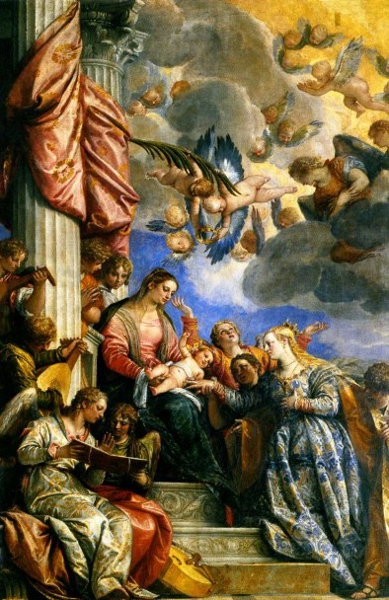 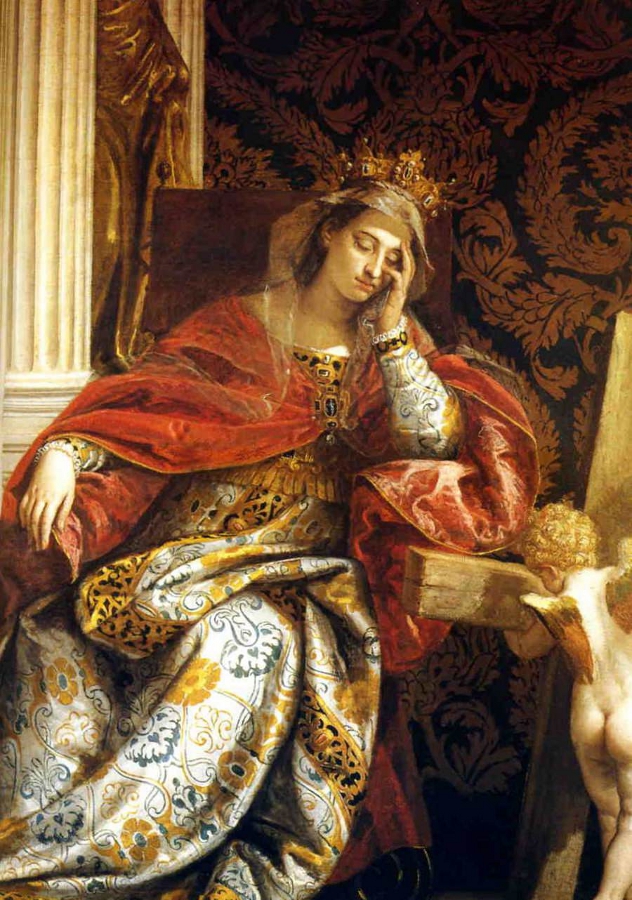 St Catherine was painted for the Altar of the church of Santa Caterina in Venice.

Veronese died in Venice on April 9th 1588. He left behind a productive family workshop headed by himself and including his brother Benedetto and two of his sons Carlo and Gabrielle. The workshop continued to flourish after the artist's death. 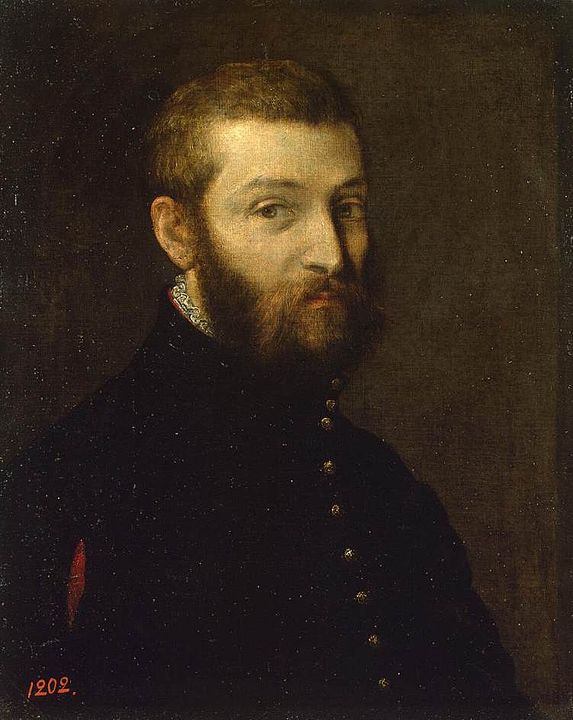