The Birth of Venus.
Botticelli's Goddess of Love.

The Birth of Venus is probably Botticelli's most famous painting. The picture is painted on canvas a less expensive alternative to a wooden support, this would suggest that the Venus was intended for a less formal setting than a Palace.

It hung at Castello in the country villa of the Medici along with another of the artist's mythological offerings the "Primavera" this would indicate that the work was commissioned by the Medici family. However, we do not know which member of that family was responsible for commissioning the painting. 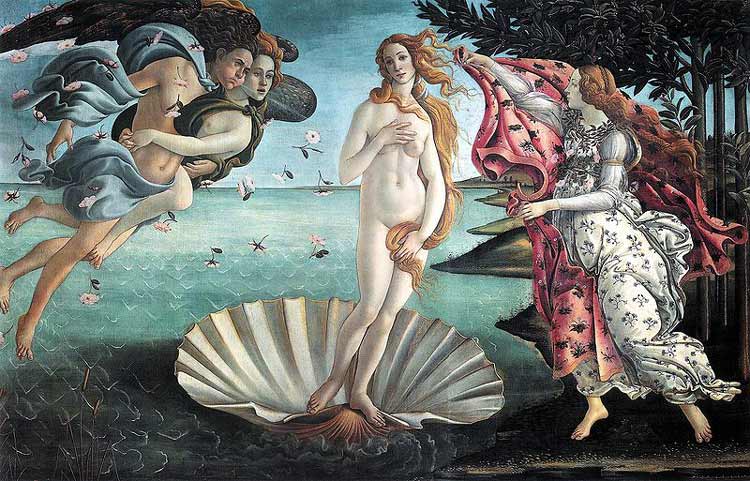 Venus is depicted standing upright in an oversized clamshell, her posture is unstable and off balance, her hands attempt to modestly cover her statuesque beauty as her long, golden hair billows in the breeze. Roses float from the sky in a reference to their origin which supposedly coincided with the birth of the Goddess.

She rises from the sea looking like a classical statue and floating on a seashell in what is surely one of the most recognisable images in the history of art.

On Venus' right is Zephyrus, God of Winds, he carries with him the gentle breeze Aura and together they blow the Goddess of Love ashore. She is guided to the island of Cythera – sometimes translated as Kythera - where The Horae, Goddess of the Seasons, waits to receive her and spreads out a flower covered robe in readiness for the Love Goddess' arrival.

Botticelli has emphasised the central figure by going over the outline with a black line.

The title of the painting is misleading according to mythology Venus was actually born from the genitals of Uranus, God of the sky. His son, Cronus - in revenge for his father’s cruelty - had cut them off and thrown them into the sea where the waters formed a froth around them giving life to the fully-formed Goddess.

The Birth of Venus, Botticelli's icons of obsessive Love. 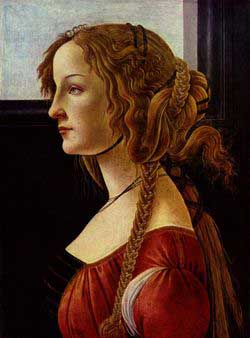 The model for Venus is thought to be Simonetta Cattaneo de Vespucci, a great beauty and favourite of the Medici court.

Botticelli also used Simonetta as the model for several other women in his paintings supporting the view that he was actually in love with her.

In fact, Simonetta died at the young age of twenty-two and Botticelli expressed a wish to be buried at her feet.

It is thought that Simonetta was born at Portovenere in Liguria, romantically this is the birthplace of the goddess Venus.

The idea for the Birth of Venus was possibly provided by the Medici court poet Angelo Poliziano, Botticelli has also taken some inspiration from a hymn by the classical poet Homer. However, it is an unusual subject for the time, as most Renaissance artists used themes from the teachings of the Catholic church for their paintings. The mythological works by Botticelli, The Venus, "Primavera", and "Pallas and the Centaur", typify his pagan phase. 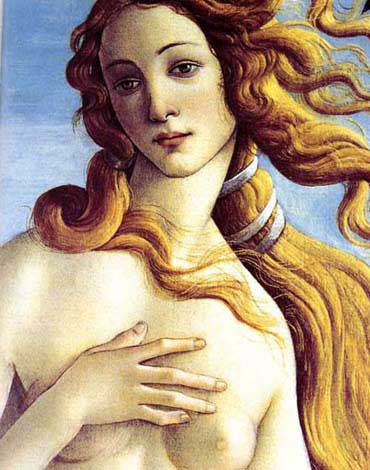 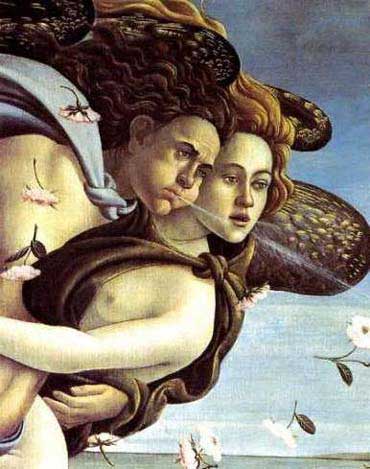 What a fantastic image by Botticelli, you have to admire his simple, but very effective line drawing. This will always be... Venus.

Again a beautifully executed double image of the gods.
Is "Aura" yet another portrait of Simonetta Vespucci, the second within the same painting?
It probably is, in any case, this detail is filled with a harmonious tenderness and perhaps highlights the depth of feeling that Botticelli had for Simonetta.

Does he imagine himself as the God of Winds, embracing the love of his life in his arms?
What a romantic notion!