Michelangelo Biography.
The Life and Work of a Renaissance Giant.

Michelangelo Buonarroti was born on March 6th 1475 in Caprese Tuscany. His father,  Ludovico, was an official and local governor of the towns of Caprese and Chiusi. His mother was Francesca di Neri del Miniato di Siena, unfortunately, she died when he was only seven years old.

He was raised in Florence and, as a thirteen-year-old, was apprenticed to the busy workshop of the painter Domenico Ghirlandaio. In this workshop, he mastered the techniques of fresco painting and of draughtsmanship.

The young artist studied the great masters of the past, Giotto, Donatello, Masaccio and the Greek and Roman sculptors, whose work he could find in the Medici collection in Florence.

The Buonarroti family, through the artist's grandmother, were distantly related to the powerful Medici banking family. From 1490-1492 Michelangelo was living in the Medici household and he claimed to be of noble birth for the rest of his life.

Lorenzo de Medici commissioned the first two works attributed to the young artist, "Madonna of the steps" and 'Battle of the Centaurs', both completed in 1492.

Michelangelo became increasingly interested in the human form and studied anatomy, dissected bodies and drew from live models all in his quest to master the complexities of posture and movement.

In 1494 the preaching monk Savonarola emerged as the new leader of Florence and the Medici were expelled from the city.

Michelangelo, unlike Leonardo who fled the city, (Leonardo considered Savonarola to be a dangerous fanatic) was touched by the priest's teachings of morality and the promise of a rejuvenated Roman Church. However, the artist decided to maintain his ties to his patrons the Medici and followed them north to Bologna.

His connections with the powerful Medici paid dividends in Bologna, the young artist was introduced to and taken in by one of the city's most prominent citizens, Gianfrancesco Aldovrandi. 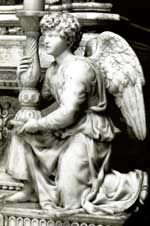 Angel with a candlestick. (s) Bologna. 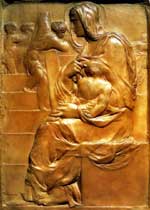 Madonna of the Steps. (s)

On Gianfrancesco's recommendation, Michelangelo was given the task of carving three statuettes for one of Bologna's most famous artistic monuments, the Tomb of St Dominic. The tomb was left unfinished by the death of Niccolo del Arca in 1492.

The young sculptor's contribution to this giant of a tomb is the Angel with a candlestick, and the saints Petronius and Proculus.

The completed work on these three pieces had been produced in a little under a year. It was in 1496 that a marble of Cupid (now lost) by Michelangelo was sold as an ancient piece to Cardinal Raffaele Riario.

The cardinal discovered the fraud but was so impressed by the quality of the carving that he invited the artist to Rome.

Cardinal Riario was the most powerful and richest man in Rome, only the Pope himself had more power and influence. Michelangelo was given a block of marble to work with and between 1496 and 1497 produced his statue of Bacchus. The Cardinal was unimpressed and rejected the work.

The rejected statue came into the possession of the Roman banker Jacopo Galli. It was through this connection that the artist received a commission from the powerful French Cardinal, Jean de Bilheres, the Pieta.

The great man considered himself to be a sculptor an architect and a poet and in 1497 he received the commission for one of his most famous works the Pieta, housed at St Peter's in the Vatican city.

Michelangelo had personally visited the marble quarries at Carrara to select and supervise the quarrying of the marble block. His attention to detail paid off, the marble Pieta is of the finest quality. 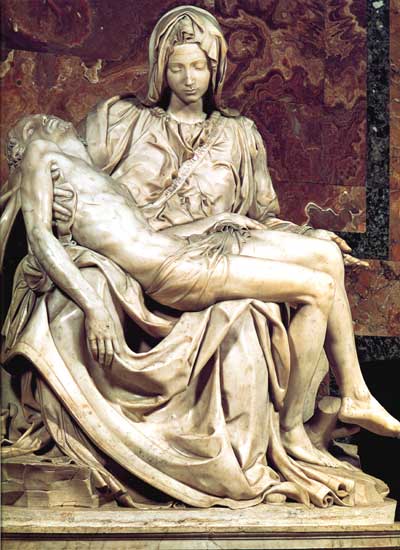 It has often been stated that Michelangelo had the ability to visualise the finished sculpture simply looking at the block of stone in front of him. When you gaze upon the Rome Pieta the story becomes totally believable. The work was carved and completed in 1499 when the artist was only 24 years old.

Returning to Florence in 1500 he began work on perhaps the most recognisable statue in art, the carving of David (completed in 1504) depicting the moment he decides to battle Goliath. This work, created from marble quarried from the famous site at Carrara, established the sculptor as an outstanding master of his time, all before his 30th birthday.

With the triumph of the David still fresh, Michelangelo was commissioned by Piero Soderini, a statesman of the Republic of Florence, to produce a fresco for the Florentine state hall in Palazzo Vecchio. The chosen subject was The Battle of Cascina, the work never progressed beyond the cartoon stage, even so, it influenced generations of artists who admired and copied it.

After the completion of the Rome Pieta and the Florentine statue of David, the artist's fame was assured. He was never again short of commissions and his financial future was secured with the purchase of various properties in and around Florence. 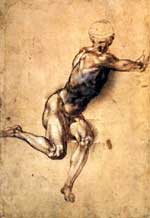 Drawing for the Battle of Cascina. (s) 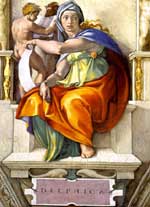 Pope Julius II invited the artist back to Rome and commissioned him to work on a tomb worthy of the Pope's standing as the overlord of Christendom. The massive scale of this enterprise was never realised but was scaled down and is located in the Church of Pietro in Vincoli in Rome. 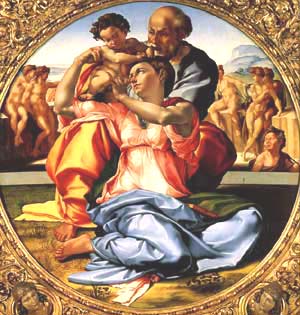 Michelangelo was regarded as arrogant and short-tempered and, disappointed by the scaling down of the tomb, returned to Florence and wrote a rude letter to the Pope saying that if he wanted him, he could go out and look for him.

Considering that Julius II was totally ruthless this letter could have been considered a rather rash and costly mistake, however, the Pope did not lose his temper but contacted the leaders of Florence in an attempt to persuade the sculptor to return to Rome.

The head of the city of Florence gave the artist a letter of recommendation stating that the young artist's skill was unequalled throughout Italy and he was soon back in the pope's service.

The Doni Tondo was commissioned by Agnolo Doni from the wealthy Florentine family, probably to commemerate his marriage to Maddalena Strozzi.

A Tondo is an Italian name for a circular piece of work.

When you consider that Michelangelo considered himself to be a sculptor, not a painter, this is a remarkable early work. It is his only surviving, finished panel painting.

Just look at the quality of the drapery expertly executed by the artist. The array of heads and arms combine forming traditional triangles resulting in a very pleasing composition.

A chapel in the Vatican had been built by Pope Sixtus IV and is therefore called the Sistine Chapel, this was the next great commission given to Michelangelo. The walls had been decorated by famous painters of the past and the pope wanted the vault of the chamber painted to complete the decoration of the chapel.

This work, lasting for four years, was completed with the artist having to lie on his back and paint looking upwards. The work contains over 300 figures and centres on the Book of Genesis, it remains one of the finest examples of one man's physical, intellectual and artistic achievement.

The Creation of Adam. (w)

Michelangelo was commissioned by Pope Leo X to build a family funeral chapel for the Medici in the Basilica of San Lorenzo one of the largest churches in Florence. In this project, the artist created both the sculptures and the plan for the interior.

In the 1530s the artist left Florence and returned to Rome.

The Last Judgement on the altar wall of the Sistine Chapel began in 1534, twenty years after the painter had finished the vault, took the artist seven years to complete. The massive fresco was unveiled in a ceremony on October 13th 1541 but the pictures of naked bodies on display in the chapel were considered to be obscene.

The pope resisted calls for the fresco to be removed, however, it was decided that the genitals should be covered, a work that was undertaken by Daniele da Volterra an apprentice of the great artist.

Perhaps Michelangelo least well-known paintings can be found in a chapel within the Vatican complex, The Pauline Chapel. This series of frescoes, commissioned by Pope Paul III, are sometimes considered to be inferior to the more famous Sistine Chapel works.

The crucifixion of St Peter. The Pauline Chapel. (Detail) (s) 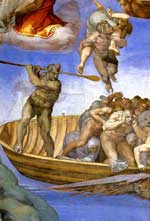 Charon the Boatman. from the Last Judgement in the Sistine Chapel. (s)

The two works completed for the Chapel are The Conversion of Saul and The Crucifixion of St Peter. These paintings did not follow the conventions of the composition of the time but they do need to be viewed from within the long narrow chapel to see them at their best.

The last great work in the artist's life came with the design of the dome for St Peter's Basilica. 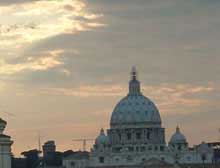 In 1546 Pope Paul had appointed him chief architect at the Vatican. The brief was to oversee the construction of The Farnese Palace, this was in addition to his work in St Peters.

The great sculptor, painter, poet and architect dedicated the last twenty years of his life to the dome, he refused payment for the project considering the work to be for the greater glory of God.

Michelangelo was the only artist of the Renaissance period to have his autobiography published while he was still alive. The writer Ascanio Condivi's Life of Michelangelo was published in 1553 and followed Vasari's Lives of the Artists of 1550.

By the time of these publications he was the most famous artist in the world and was wealthy enough to provide for his family for most of their lives, a millionaire with a wide circle of noble and influential friends.

With his friend Tommaso de' Cavalieri, and his pupil Daniele da Volterra at his bedside, Michelangelo died in Rome on February 18th 1564 aged 88. 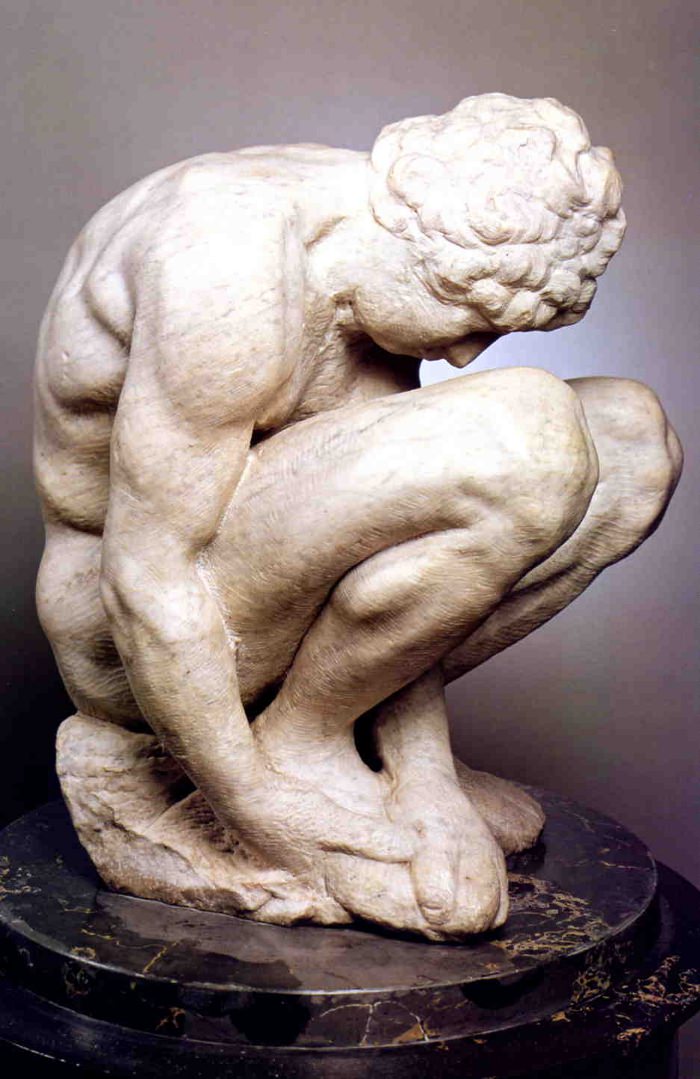