Luca Signorelli was born in the town of Cortona in the province of Arezzo in Tuscany under the birth name of  Luca d'Egidio di Ventura. His exact date of birth is unknown but c. 1441 is a popular estimate.

He was Influenced by artists such as Pietro Perugino and Piero della Francesca, two painters who had been influenced by Florentine art but who had not been directly involved in the Florentine scene. He is famous for his studies of the naked human form and for his foreshortening techniques. Little is known about his private life, Vasari describes him as a kindly, family man who lived more like a nobleman than a painter.

Signorelli was one of a group of artists summoned by Sixtus IV to decorate the walls of the Sistine Chapel, the artist's contribution was 'The Testament and Death of Moses' painted in collaboration with Bartolomeo della Gatta, this was his first major commission. 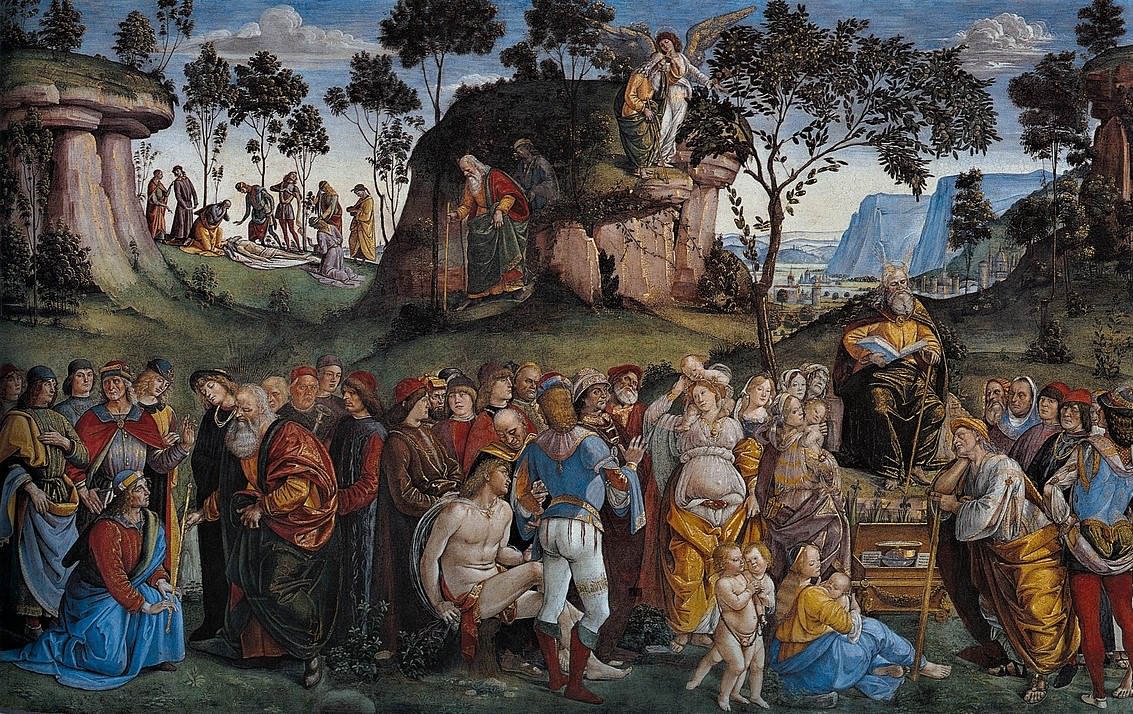 Signorelli's trip to Florence in or around 1490 resulted in a commission from Lorenzo de' Medici, the painting known as The Court of Pan. 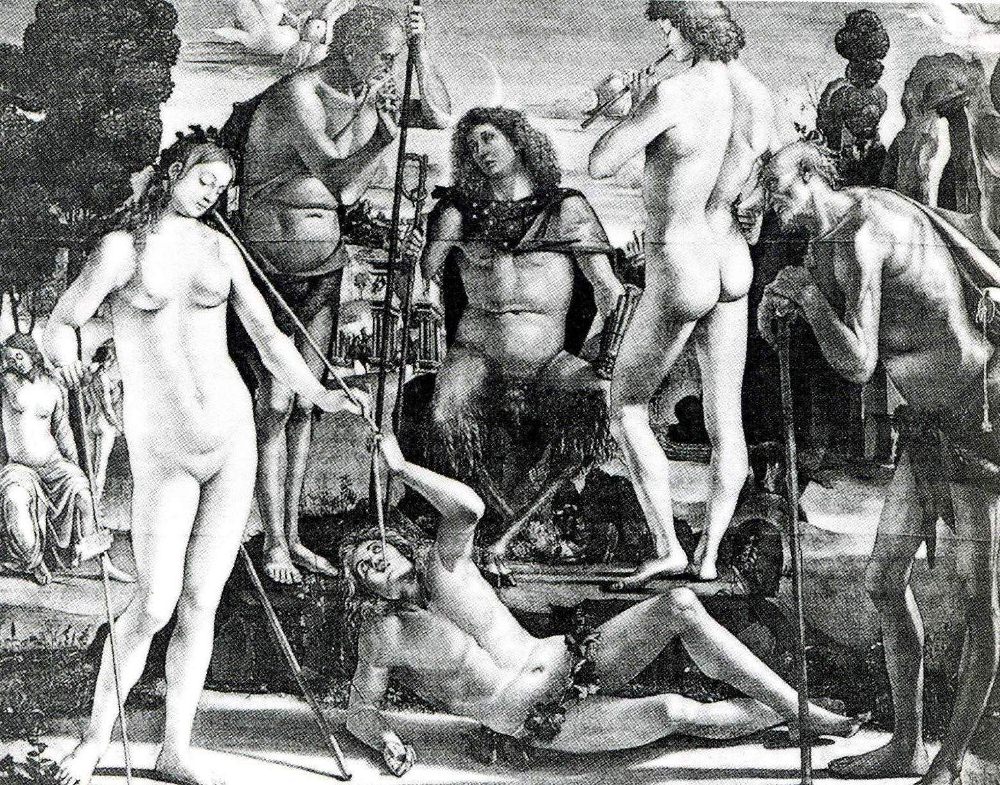 The half-human half-goat figure of Pan sits enthroned in the centre of the picture, the other figures are all human. On each side of Pan are two elderly male figures, both holding a staff. A younger male figure stands before Pan Playing a pipe and another reclines at the feet of the god.

Perhaps the most significant statement in this work is the young naked woman holding a long pipe in the foreground of the painting. Pan was unsuccessful in his pursuit of Syrinx the nymph and this female figure may well symbolise Pan's failure to seduce her

The painting was destroyed by allied bombing in WWII. 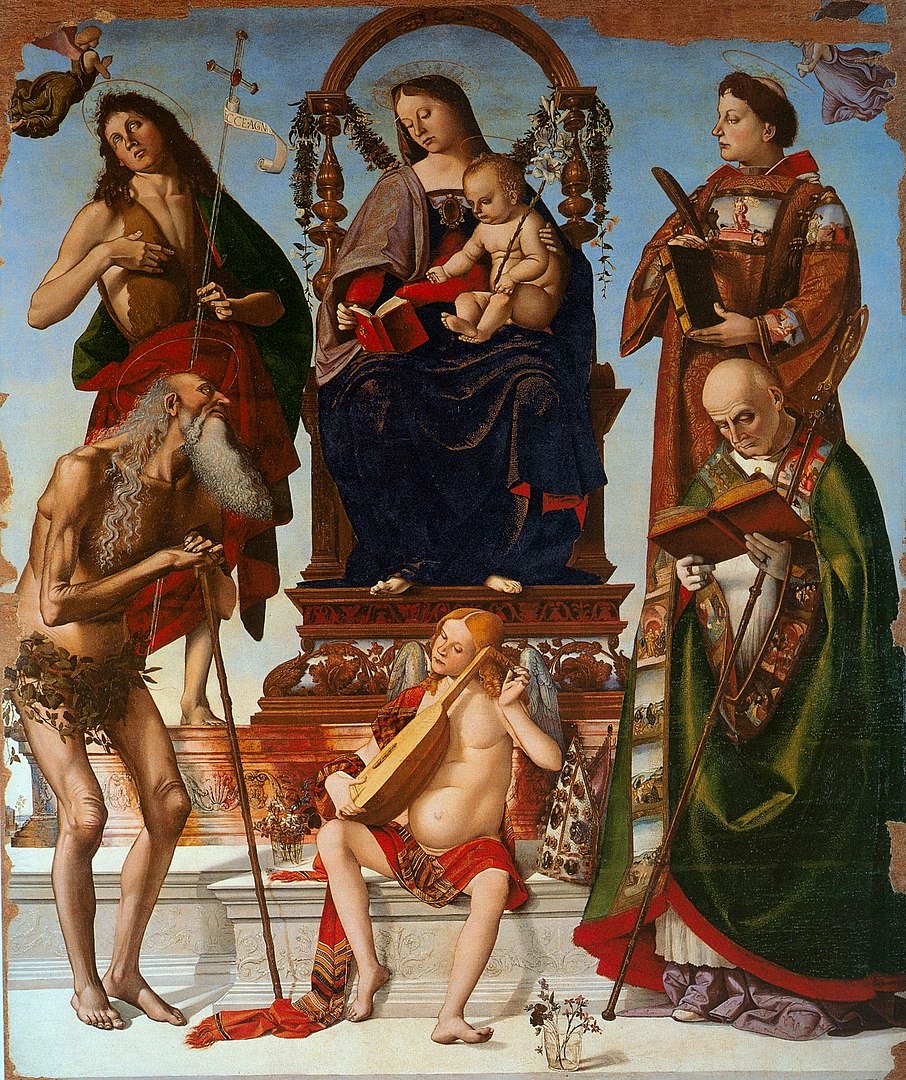 Sant'Onofrio Altarpiece. Tempera and oil on panel. 1484 (located in the Museum of Perugia Cathedral) (w)

The Sant'Onofrio Altarpiece depicts the Virgin, seated on a throne, reading a bible while the infant Jesus holds a white lily, a symbol of purity. The saints John and Lawrence are placed at each side of the mother and child. In the foreground St. Onofrius and St. Herculanus are separated by the central figure of a lute-playing angel.

Considering Signorelli's keen interest in the human form some of his figures in this work seem a little experimental and disjointed. The pot-bellied angel with the spindle legs is unflattering, while St Onofrius is depicted as a withering example of old age. However, the work was accepted as an Altarpiece despite the awkwardness of some of the figures! Ouch!

Signorelli’s vast compositions housed in the Chapel of the Madonna di San Brizio, Orvieto Cathedral, Umbria, Italy are his most famous works. Painted in the chapel’s lunettes these frescoes are regarded as his masterpiece. 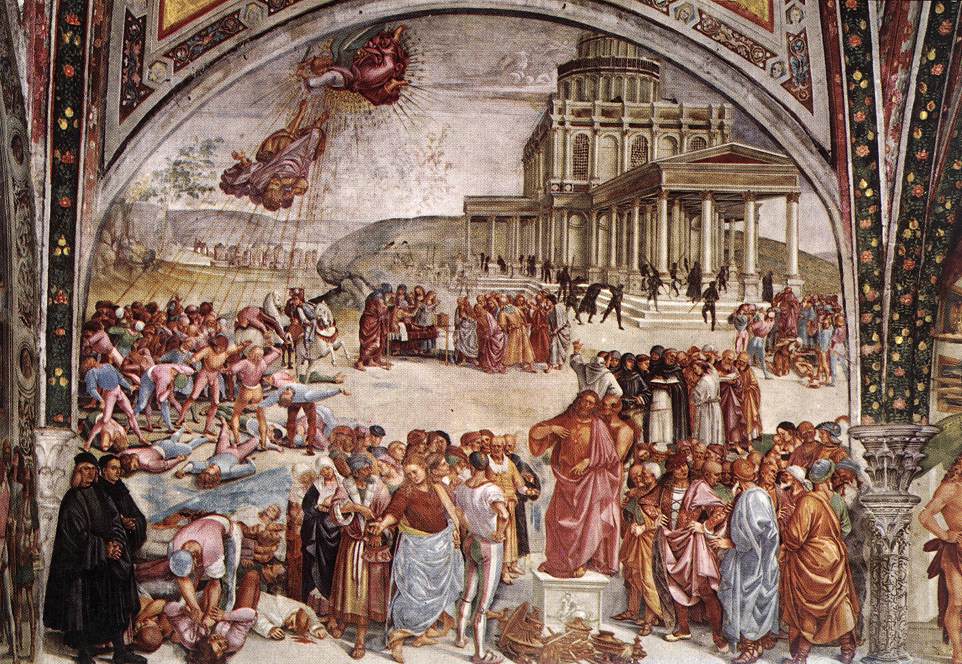 The Preaching of the Antichrist. Fresco, Chapel of San Brizio, Orvieto Cathedral. (w)

The Devil whispers into the ear of the Antichrist as he preaches his sermon. In the skies above the Archangel Michael descends  and prepares to do battle with the Antichrist. There are thought to be many portraits of famous renaissance personalities within the Antichrist. These include Raphael, Christopher Columbus, Cesare Borgia, Dante and a self-portrait of the artist.

The following three images (The Damned, The Resurrection and the Elect) all display an impressive number of male and female nudes. It is clear that the artist had made extensive studies of human anatomy even to the point of dissecting dead bodies. His figures twist and turn, bend and stretch, gesticulating in all manner of positions in what is a magnificent study of the human form.

Michelangelo was greatly influenced by these works and even used Signorelli's frescoes as a reference point when completing his own great masterpiece, The Last Judgement in the Sistine Chapel. 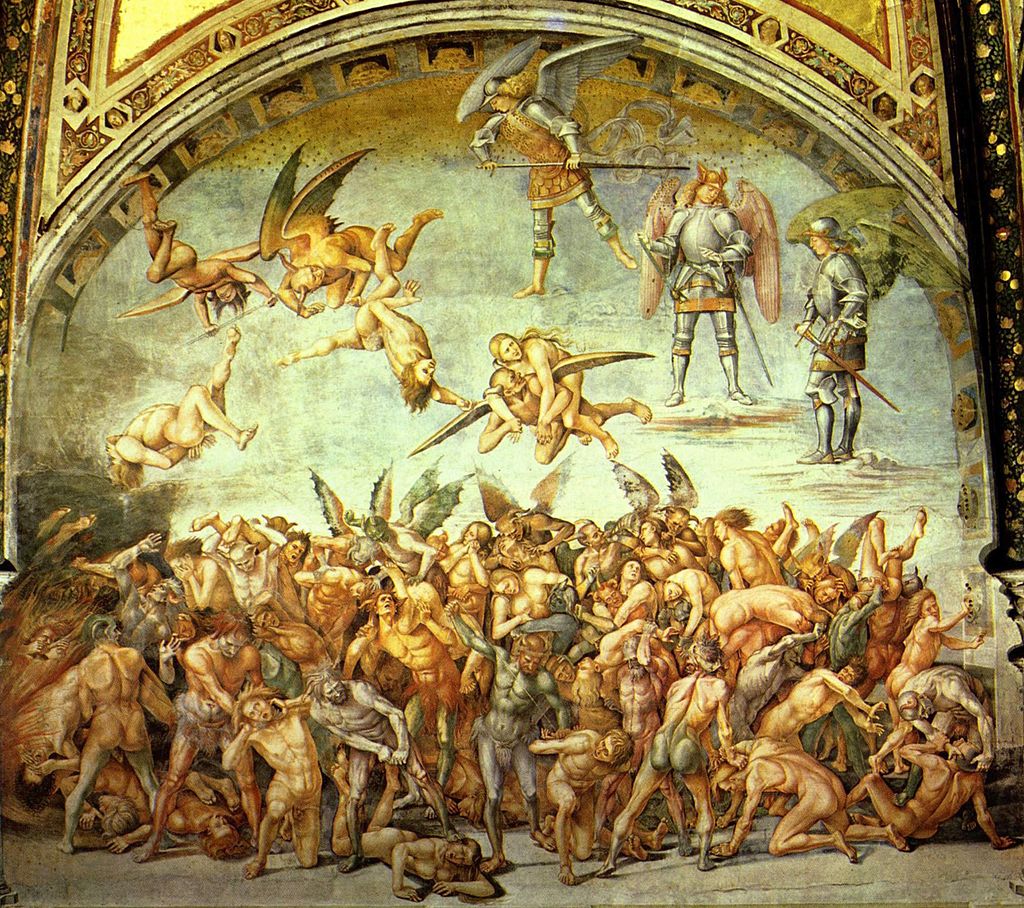 The damned are a group of sinners who have transgressed so seriously that they have been denied entry into the kingdom of heaven. Instead they have become a mass of desperate humanity as they twist and gesture the anguish is etched on the faces of this writhing multitude. They remain helpless as demons from hell arrive and capture them in preparation for their transportation to the underworld. 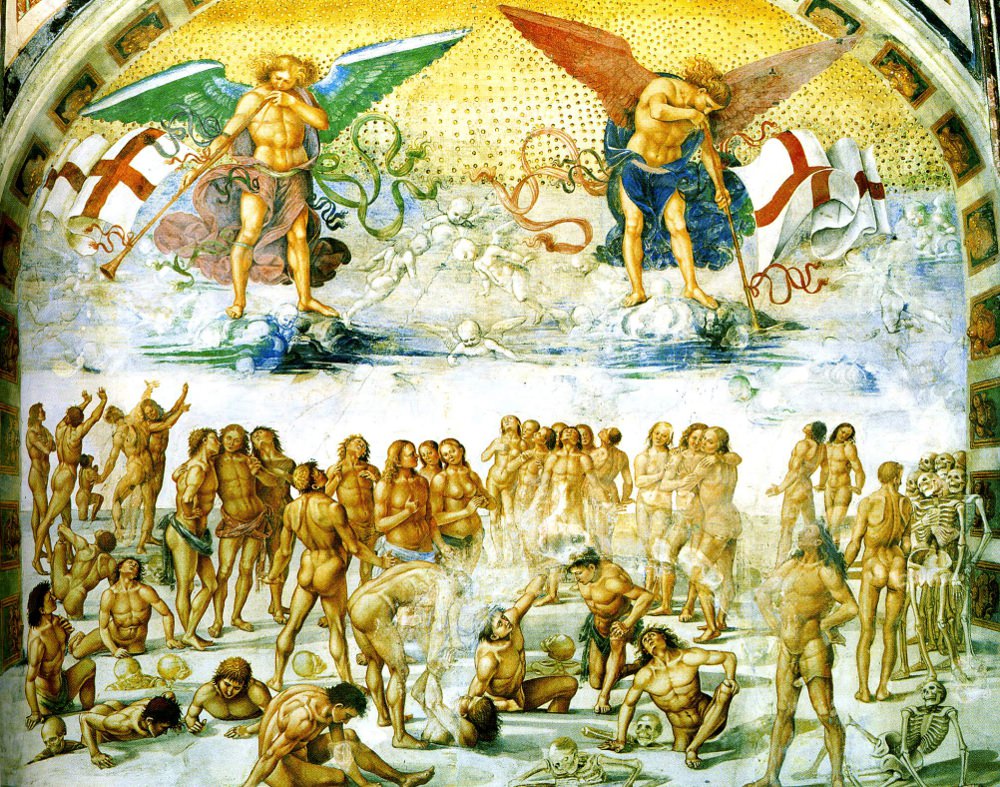 The Resurrection of the Flesh. Fresco, Chapel of San Brizio, Orvieto Cathedral 1499-1504 (s)

The deserving are resurrected, they recover their human form and are destined for paradise. 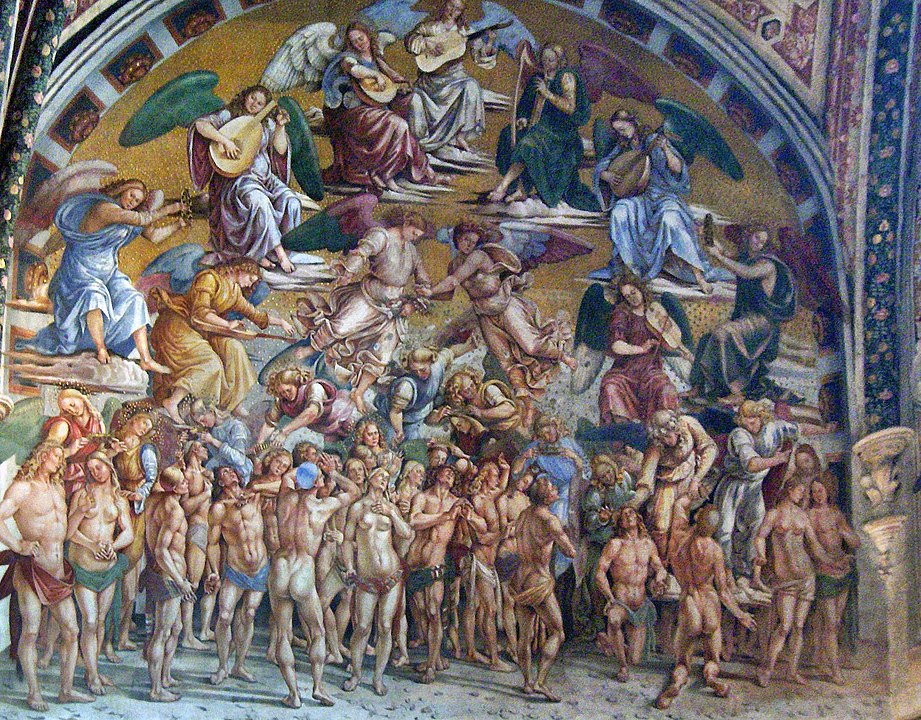 In his later years Signorelli returned to his birthplace, the town of Cortona where he died on October 16 1523, he was 82/83 years old and had continued to work on commissions well into old age. 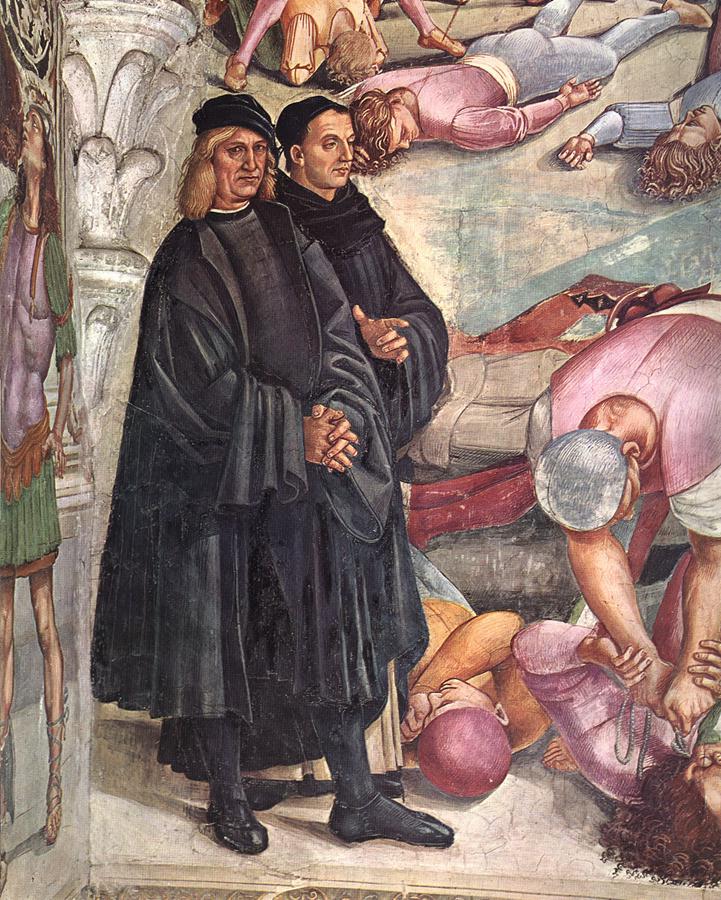 The two details above highlight the amazing variation in Signorelli's depictions of the human figure.