Raphael Biography.
The genius from Urbino.

Raffaelo (Raphael) son of the painter Giovanni Santi and his wife Magia Ciarla was born on the 28th March or the 6th April 1483. His father Giovanni Santi was a competent painter and was highly regarded in Urbino, a province that housed one of the most glittering courts in Italy.

Giovanni was an educated man of letters and was well aware of the contemporary artists of the day.

His preferences seem to have been  Mantegna, Leonardo, Signorelli, Giovanni Bellini and Pietro Perugino, but he was also impressed by the artists Jan van Eyck and Rogier van der Weyden from the Netherlands.

This provided the young Raffaelo with quite a privileged upbringing within the culture of the Umbrian court.

It seems that his life was destined to progress smoothly from childhood through to fame, considerable wealth, and adulation from his contemporaries and patrons. Not for Raphael the image of an artist working in squalor, begging for handouts for food and materials, he was blessed from the beginning!

However, Raphael's mother dies in 1491 when he is 8 years old. His father Giovanni dies three years later when he is still only eleven!

Before his death, Giovanni manages to place his son as an apprentice in the workshop of Pietro Perugino. Perugino was highly successful and his paintings realised high-profit margins for himself and for his Perugian dealers.

Although Raphael very quickly freed himself from the painting style of his master, he followed Perugino's method of constructing paintings all of his life.

Perugino and his workshop had a firm grip on the market in Perugia, so in 1500 Raphael, now a master at the young age of seventeen, secured commissions in neighbouring Citta di Castello. It is here that he produces his earliest acknowledged work, a processional banner, now surviving in very poor condition.

It would seem that Raphael secured a certain amount of financial independence at a tender age.

The Umbrian cities and courts provided a source of wealthy potential clients for the young artist. Raphael had started to produce quality work at a very early age and there is no doubt that he could have secured a lucrative career for himself within these circles.

Raphael's move to Florence in 1504 was fuelled by his hunger to learn more from the acknowledged greats of Florentine art. Leonardo da Vinci was at the height of his fame and had returned to the city from Milan in 1500 and Raphael copied figures by Leonardo and Michelangelo who had both studied the anatomy of the human body.

In Florence, Raphael completed three large altarpieces, The Ansidei Madonna, The Baglioni altarpiece, both commissioned for Perugian clients, and The Madonna del Baldacchino for a chapel in Santo Spirito, a Florentine church.

One of his final paintings of the Florentine period is the magnificent Saint Catherine now in the National Gallery in London. Raphael was able to continue with his own developing style whilst absorbing the influences of Florentine art. 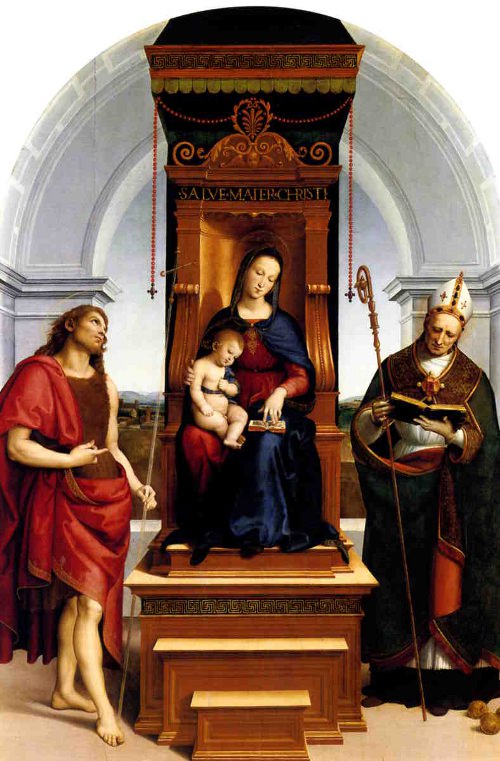 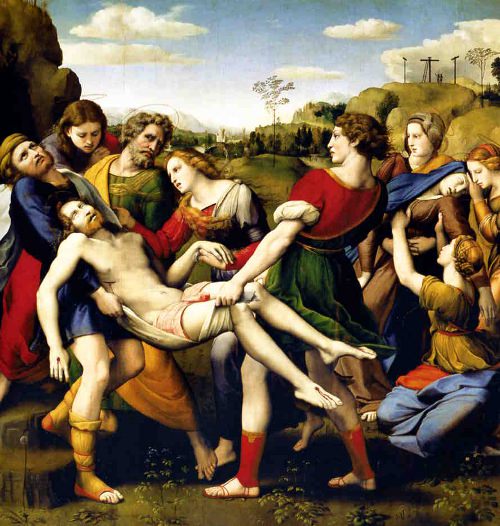 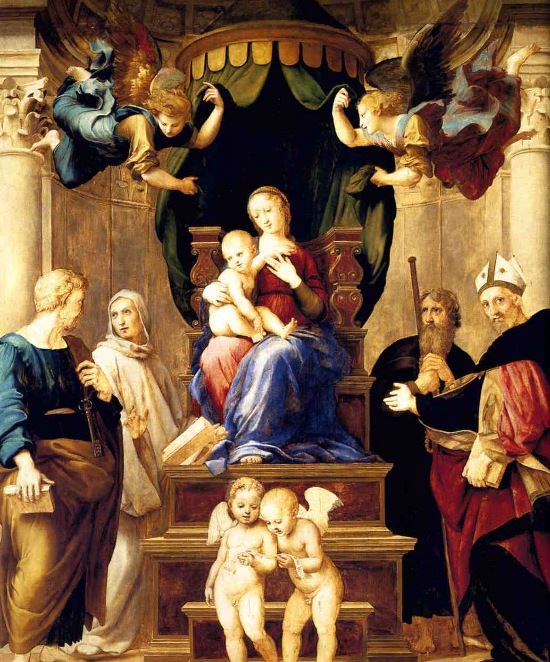 In Renaissance times the Vatican in Rome held much more influence than the state within a state that we know today, it was the hub of the city. Raphael literally arrived on the scene in 1508, the same year that Michelangelo began work in the Sistine Chapel. 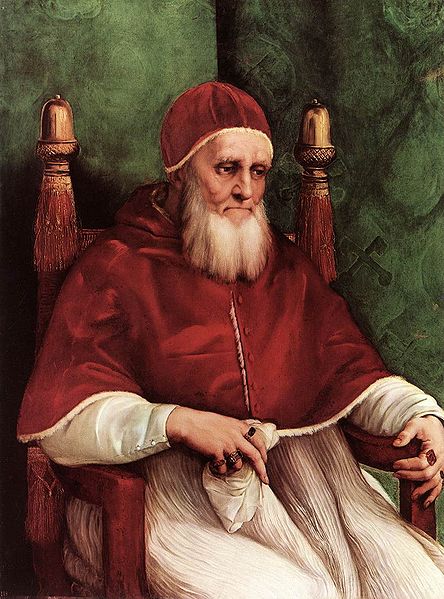 At the age of 25, he found a patron, Pope Julius II, and was given the task of decorating rooms in the pope's private apartments. The Stanza also known as the Raphael rooms, is located on the upper floor of the Vatican palace.

The rooms already contained works by Piero Della Francesca, Perugino and Luca Signorelli, but the Pope decided that these works would have to be sacrificed to accommodate the young artist's frescoes.
Raphael started work first in the middle chamber, the Stanza della Segnatura, containing the pope's library.

This room contains some of the artists best-known works including, The School of Athens, Parnassus, and The Disputation of the Sacrament.
In the second Stanza room, the Stanza d'Eliodoro, he completed four frescoes, again commissioned by Julius II.

These paintings; The Mass at Bolsena, The Release of St Peter, The Expulsion of Heliodorus, and The Repulse of Attila are groundbreaking in the artist's use of light and composition.

As Raphael was working in the Stanza, Michelangelo was absorbed in his painting of the Sistine Chapel ceiling. A fierce rivalry ensued between these two artistic giants and Michelangelo went so far as to accuse his young rival of conspiring to poison him.

Raphael has included a weeping Michelangelo as Heraclitus in his School of Athens, a parody of Michelangelo's style.

A new patron and a new Pope.

The amount of work produced by Raphael is remarkable when you consider his untimely death at the age of 37. He produced a wealth of paintings including several Madonna’s, portraits and altarpieces, all in addition to his Vatican efforts.

His only mythological work, Galatea, was painted for the Tiber villa of Agostino Chigi, another of his great patrons. Chigi was a Sienese banker and commissioned work on his private chapel located in the church of Santa Maria del Popolo in Rome, also designed by Raphael.

The work was completed more than a century later by Giovanni Lorenzo Bernini. 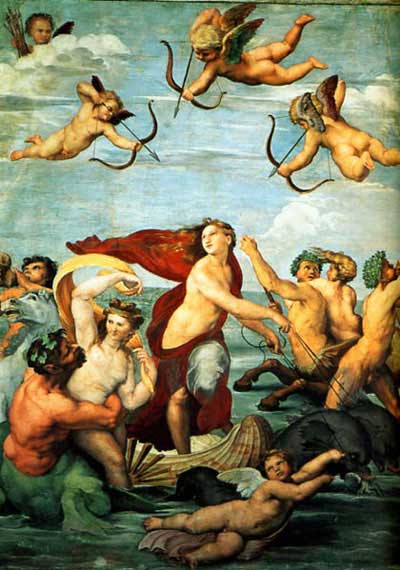 Raphael had not finished his work in the  Stanza d'Eliodoro when in 1513 Pope Julius II dies and on the 11th March Giovanni de Medici is elected and takes the name of Leo X.

The artist's rise to fame and fortune continued under the patronage of the new pope, in fact, the commissions under Leo became ever more demanding. Raphael was now very successful and had an extensive workshop of about fifty pupils and associates and, due to his vast workload, his assistants increasingly completed works following the artist's designs.

Some of the later works in the Stanze have been painted by his assistants and pupils.

In 1514 Raphael finished his work in the Stanza d'Eliodoro and paints his Fire in the Borgo in the Stanza dell Incendio. This is the only work that Raphael is believed to have had some involvement in the actual execution of the painting.

All the remaining work in the Stanza dell Incendio was completed by his workshop.

Raphael's upbringing in the court at Umbria had honed his personal skills, he was well mannered and a favourite of the papal regime. Bramante had overseen plans for the rebuilding of St Peter's under the patronage of Julius II. He recommended Raphael for the post of chief architect and, despite the artist's limited experience, Leo X appointed him the architect of St Peter's on April 1st 1514.

In 1515/16 he designs cartoons for a series of tapestries for the Sistine Chapel. The theme was the acts of St Peter and St Paul. The tapestries were to hang below the early frescoes on the chapel walls.

These cartoons, ten in all, were painted by Raphael himself as a mirror image reversed in the weaving process. The weaving took place in Brussels and in 1519 A total of seven tapestries arrived in Rome and were hung in the Sistine Chapel.

In 1517 he begins the decoration of the Vatican Loggias and the Loggia di Psiche in Chigi's Tiber Villa.

Raphael's Loggias were grand in their design and conception. The architecture, fresco decoration and stucco reliefs caused a sensation, recreating the decorative splendour of antiquity that was so much admired at the time of The Renaissance.

Raphael never married but is said to have many lovers. Chief among these is  Margherita Luti who was his mistress throughout his life in the papal court.

He was engaged to Cardinal Medici Bibbiena's niece, Maria Bibbiena, but this seems to have been at the request of the cardinal rather than any real enthusiasm on the part of the artist.

Vasari states that Raphael's death was due to a night of sexual encounters with his mistress Margherita Luti, (how Vasari would have knowledge of this encounter is unclear), after which he contracted an acute illness lasting fifteen days.

Raphael died on the 6th of April 1520 at the age of 37 and was buried the next day in the Pantheon.

He was a famous, wealthy and popular renaissance personality and his funeral was very well attended attracting large crowds. His compositions were referred to extensively when training successive generations of artists.

Raphael became, along with Michelangelo and Leonardo, one of the three greatest masters of the High Renaissance.