The Raphael Tapestries and the cartoons that form the initial designs from which they were made are among the greatest treasures of the Renaissance. Commissioned by Pope Leo X in 1515 their intended home was the lower walls of the Sistine Chapel.

There are ten tapestries including The Miraculous Draught of Fishes which is featured on this page. The remaining nine are accessed via the mini navigation listed opposite.

To be hung on special occasions they depict events from the life of St Peter and the life of St Paul, popular subjects in the Renaissance era. Raphael and his workshop completed the cartoons in Rome but the tapestries were woven in Bruges, a centre of excellence for tapestry production throughout Europe.

Michelangelo had completed the ceiling of the Sistine Chapel in 1512 to universal acclaim, at the same time Raphael was busy decorating the Stanze rooms in the Vatican. These two famous artists harboured a rivalry that was so intense that Michelangelo's attitude toward the younger Raphael bordered on hatred.

Raphael was aware that the location for the finished tapestries was the Sistine Chapel and that comparisons with his designs and Michelangelo's ceiling were inevitable. He took great care when preparing the cartoons and actually produced a depth of colour that was not possible to reproduce in a tapestry.

The Bruges workshop of Pieter van Aelst in Brussels was chosen for the difficult task of interpreting Raphael's cartoons and converting his ideas into tapestries, a totally different medium from that of the painted cartoons.

The ten tapestries were woven between 1516 and 1521 and seven of the completed works were hung in the Sistine Chapel for the first time on St Stephen's Day 26th December 1519.

This is possibly the only time that Raphael saw any of the finished tapestries in their intended location, he died on April 6th 1520 at the age of 37. 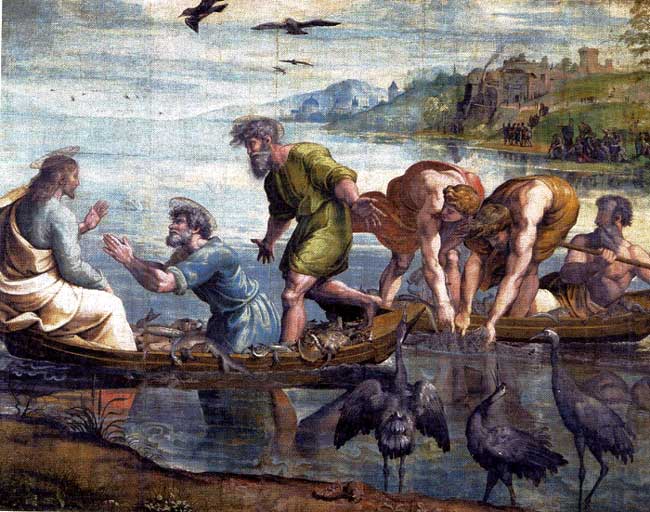 The weaving process produced a mirror image of Raphael's designs, this is because the weavers worked on the back of the tapestry with strips of the cartoon facing them. Considering that the communication between the artist and the weavers was sparse at best, the results are remarkable. 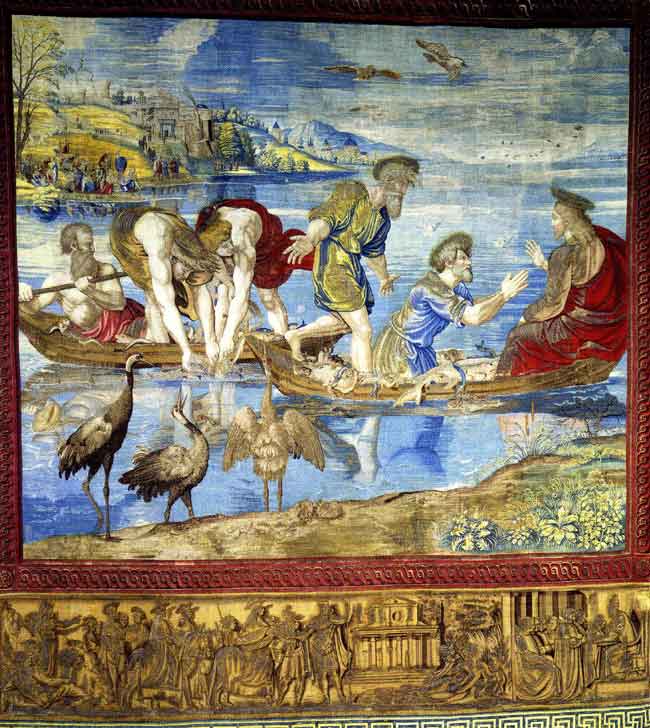 The miracle of the draught of fishes refers to an unsuccessful fishing trip by Christ's Apostles, Simon, Peter and Andrew at the sea of Galilee. Christ appears and tells Peter to cast his nets into deep water.

The result is a catch of fish that fills the boat. The second vessel sees James And John struggling to pull the overflowing nets on board while their father Zebedee tries to steady the ship.