The vault of the Sistine Ceiling covers 800 sqm of fresco painting. The largest figures consist of the Prophets and Sibyls of the ancient world, all predicting the coming of Christ.

Above the windows, the triangular spaces and lunettes are decorated with an array of men and women who await the birth of the saviour. There are four corner pendentives painted with scenes from the Salvation of Israel's people.

This page concentrates on the paintings in the centre of the Chapel's vault.

The centre of the Sistine Chapel vault is decorated with nine scenes from Genesis, four large and five small ones. Three of the episodes describe the Creation, three the story of Adam and Eve, and three tell the story of Noah.

The paintings sequence is as follows, from the South end of the Chapel.

In the beginning God created heaven and earth .
And the earth was void and empty....Genesis.

The Sistine Ceiling, The Creation. 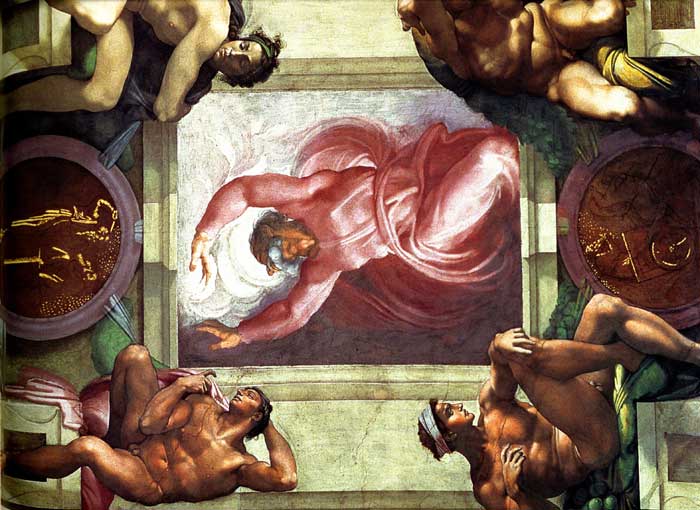 The Separation of Light and Darkness (s)

This scene clearly shows the Ignudi.

The Ignudi are the male nudes supporting corners of the smaller scenes in the centre part of the ceiling. There are 20 in all and they are painted as heavy muscular figures demonstrating Michelangelo's detailed study of anatomy. 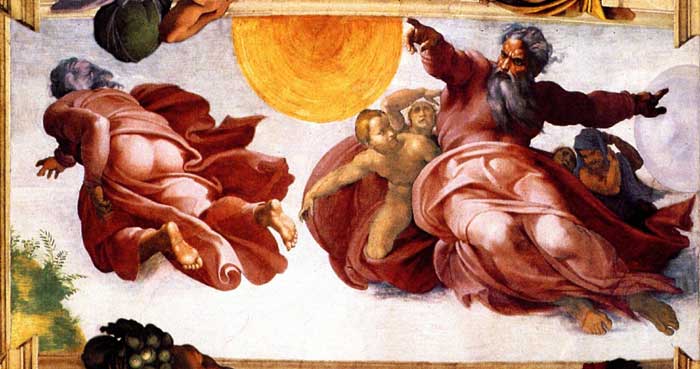 The Creation of the Heavenly Bodies (s)

Two images of God are represented in this scene. The dramatically outstretched arms of the Lord simultaneously create the orange, glowing sun and the white orb that is the moon.

In the second image, he turns away and, with a gesture of his arm, God creates the plants. The view of the Lord's backside is not intended as an irreverent insult by Michelangelo, he is merely painting a view of God that is described in the Bible. 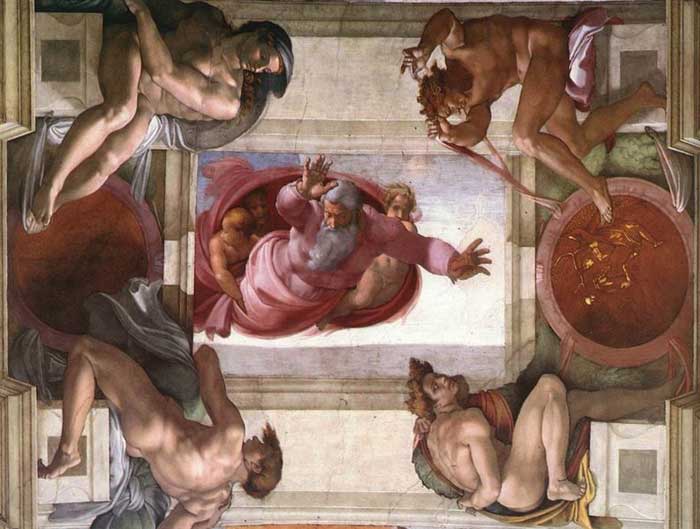 The Separation of Land and Water (w)

Let the waters that are under the heaven, be gathered together in one place: and let the dry land appear....Genesis

The Sistine Ceiling, The story of Adam and Eve. 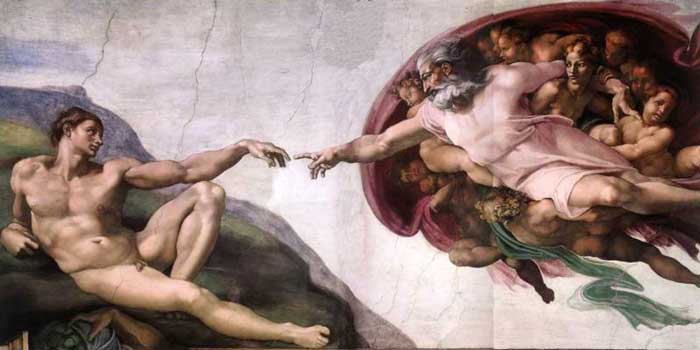 The Creation of Adam (w)

Here it is! Along with Leonardo's Mona Lisa, this has to be the most iconic image in art history.

The gesture of the fingertips, separated by a few centimetres, illustrate the moment before God invests the newly formed Adam with a soul. The imagination of the artist has produced, for all of Christianity, a universally recognised image of God, the white haired and bearded creator of man. 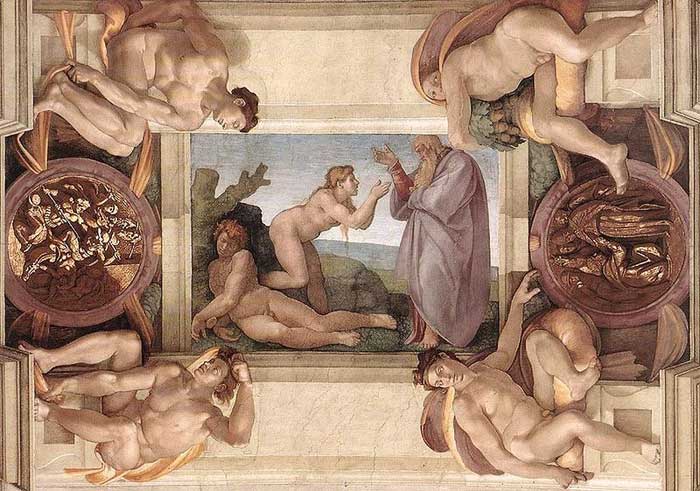 The Creation of Eve (w)

This image shows the moment of Eve's creation. She is called forth from the sleeping Adam's ribs and gives thanks to a Merlin-like God who, with a gesture of his hand, produces the first ever female.

The Fall of Man and the Expulsion from Paradise (w)

There are two scenes that make up the narrative within this picture. The first scene shows the temptation of eve receiving the forbidden fruit from the serpent.

At the same time, Adam reaches up and picks the fruit from the tree of Knowledge. In the second scene, Adam and Eve are shown as aged and ugly as they are banished from the Garden of Eden.

The Sistine Ceiling, The Story of Noah. 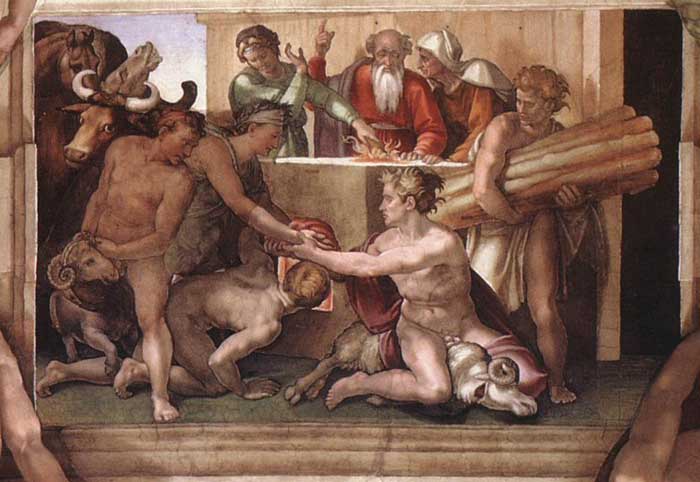 The Sacrifice of Noah (detail) (w)

Noah and his family make a sacrifice to God on their safe delivery from the great flood. 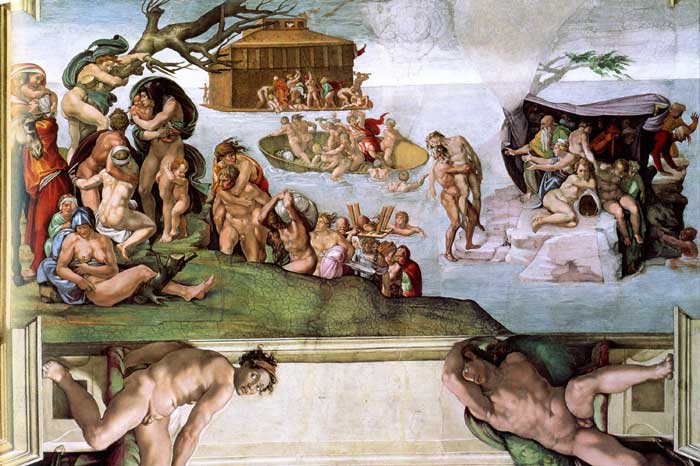 The Deluge contains more than sixty figures, some cling to a listing boat in the middle ground. Survivors of the flood desperately seek refuge on the small pockets of land still available to them.

One climbs a tree in a futile attempt to escape the rising waters, another carries the body of his drowned son in a failed rescue mission, all await the inevitable destruction that is sure to follow. In the background, the ark floats in calmer seas, a symbol of hope among the scenes of a frantic human tragedy. 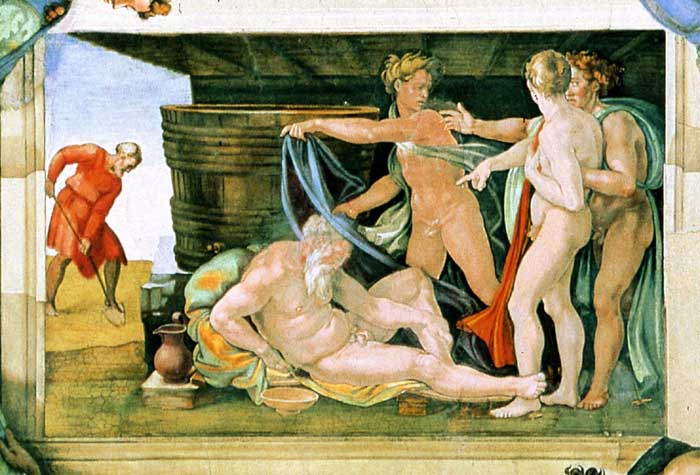 The Drunkenness of Noah (detail) (s)

After the flood, Noah became a farmer and planted a vineyard. (Noah is also shown as the background figure in red tending the soil)

In this scene he has clearly tasted too much of the wine produced by his labours and is discovered, naked in his tent, by his three sons

. Noah's drunken state did nothing to reduce his longevity, according to the Bible he died at the ripe old age of 950 years.