The Battle of Anghiari.
The Lost Leonardo!

On Leonardo's return to Florence, around 1500 he discovered a Republican city with plans to commemorate a great Florentine victory over its bitter rival Milan. On June 29th, 1440, the mercenary commander Niccolo Piccinino attacked the papal troops of Florence at Anghiari.

Piccinino lost the battle and the new Republic of Florence chose the victory as a fitting subject for the decoration of their new council chamber in the Palazzo Vecchio.

Leonardo secured the contract for the painting in the Autumn of 1503. The young Michelangelo was commissioned to do a version of an equally famous battle, The Battle of Cascina, marking the Florentine victory over Pisa in 1364.

This was the only time these two renaissance giants were in direct competition with each other.

The scale of the Battle of Anghiari was impressive, a huge 54ft by 21ft (16.7 by 6m) incorporating three continuous scenes the beginning, middle and end of the battle. Leonardo certainly completed at least part of the work, the much copied central battle scene of colliding horses and cavalry. 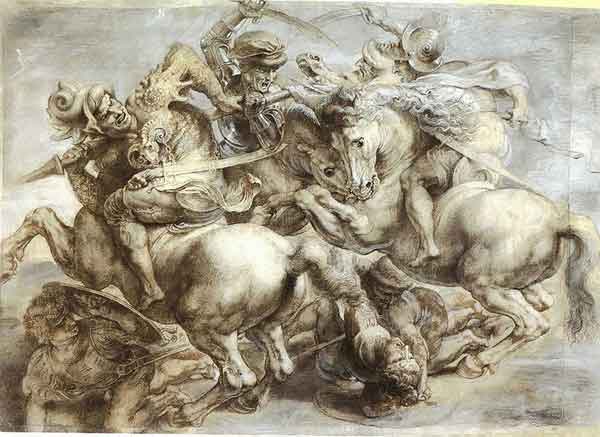 Rubens' copy, one of many reproductions over the years, is possibly the most faithful to Leonardo's original painting. It captures the drama and movement of the battle scene in great detail. This was just the centre narrative of what would have been the full story of the days fighting, Rubens gives us a snippet of what could have been and by any standards has created a magnificent work of art.

If you can imagine that the original work was intended to be much larger than life-size and that the image above is just one part of the battle scene, you will have some idea of the sheer scale of this work.

Let's say that your stride is three feet in length, pick a starting point, then do eighteen strides, look back at your starting point and you will see...that's one very large area!!!

What a pity that the proposed paintings by Leonardo and Michelangelo are both lost.
Can you imagine these two vast works side by side in the same building?

What a tourist attraction that would have been, generations of art lovers on a pilgrimage to compare the styles of two of the most famous artists in history. 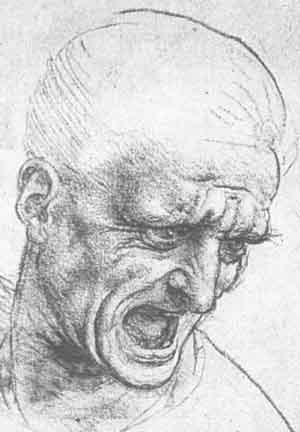 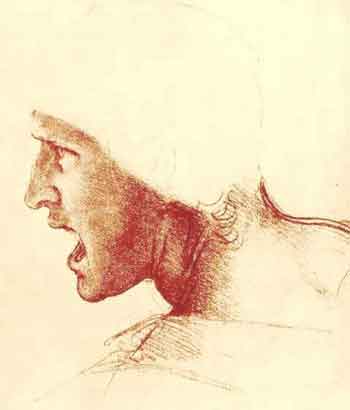 These two studies illustrate the detail and preparation that Leonardo lavished on this work. The expressions of the two soldiers can be clearly identified, even in the copy by Rubens.

Leonardo worked on this project with his two assistants Raffaello d' Antonio di Biagio and Ferrando de Llanos throughout the first part of 1505. Leonardo left Florence for Milan in May 1505 and the work was abandoned.

The parts that had been completed were protected by wooden boards but the painting was finally lost in 1560 when Vasari re-decorated the chamber with his own frescoes, forty-one years after Leonardo's death.