Leonardo's life’s work was a search for the meaning of creation itself and his many varied studies are a testament to his inquiring mind. His work on war machines seems to contradict his respect for the natural world.

However, Leonardo was aware of the dangers presented by science and the impact that the exploitation of natural resources may have on the earth.

He was a man of his time and the need for military engineers provided him with employment, travel opportunities, and the chance to continue his scientific work unhindered.

Renaissance Italy was a collection of independent city-states who became engaged in incessant warfare with each other. This provided a market for the technically advanced weapons needed to gain a military advantage over the enemy.

In short:- a Renaissance arms war!

Leonardo had studied and absorbed both classical and contemporary works on military engineering. In his famous letter to Ludovico il Moro Sforza, Duke of Milan, he listed nine categories of military engineering among the many skills that he was proficient in.

Da Vinci's design for an armoured vehicle made from wood and operated by eight men was made in 1487. The 'tank' was operated by turning the cranks. 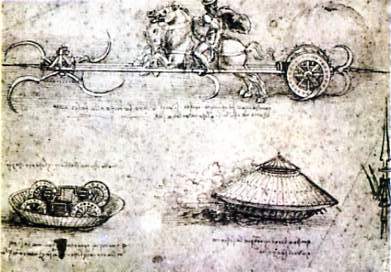 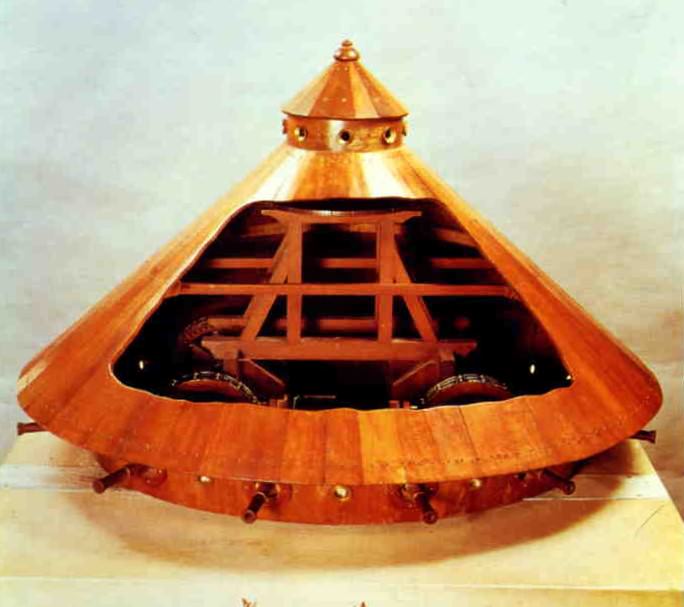 Model of the armoured car after Leonardo's drawings. (s)

Da Vinci's scythed chariot was perhaps a throwback inspired by antique machines. Leonardo suggested raising the scythes when travelling through the ranks of men so that no one on your side will be injured! 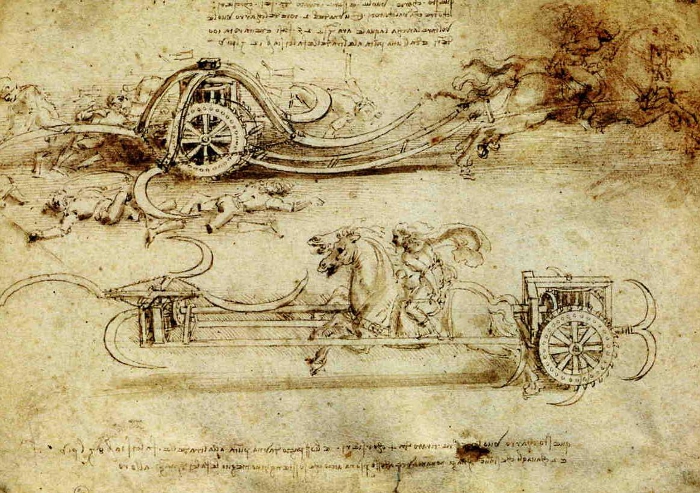 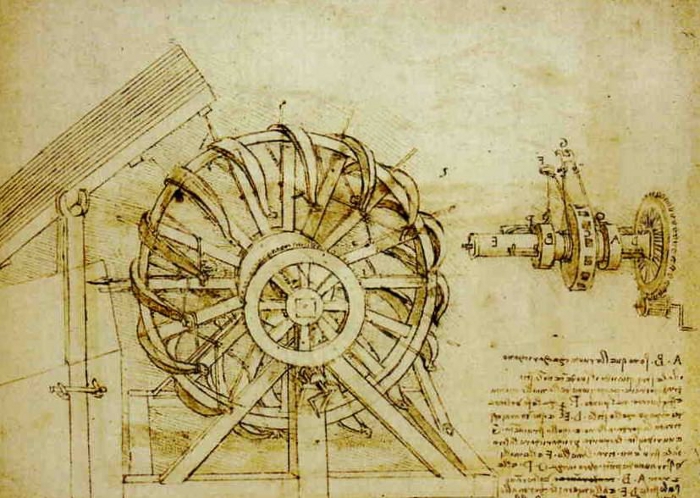 Leonardo's machine gun, which was designed to fire crossbow bolts, highlights his fascination in the production of rapid-fire weaponry. 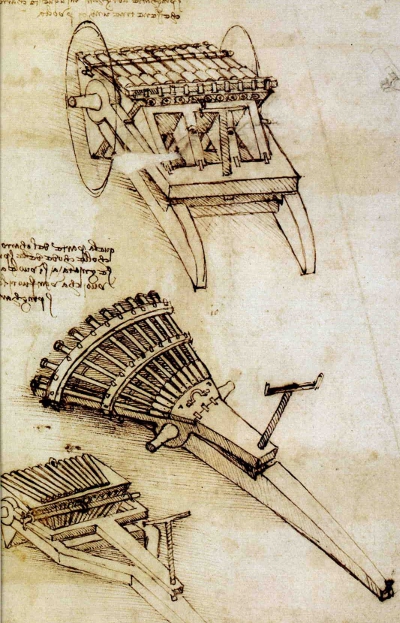 Guns with an array of horizontal barrels and gun with three racks of barrels. c1481. (s) 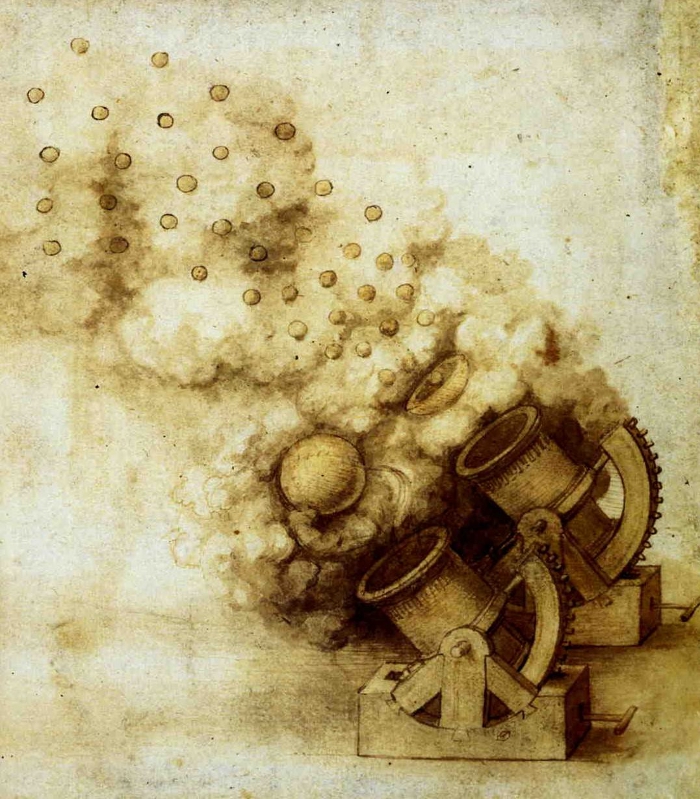 The three racks of barrels allowed the re-loading of one rack while another was being fired and could maintain continuous firepower. The 'fan type' gun with its array of horizontal barrels allowed for a wide scattering of shot.

These breech loading, water-cooled guns were years ahead of their time and it's interesting to note that steam cannons were used in World War II.

The design for mortars with exploding shells was intended to gain an advantage over the enemy by producing large amounts of small fast-moving shot which would cause maximum casualties. 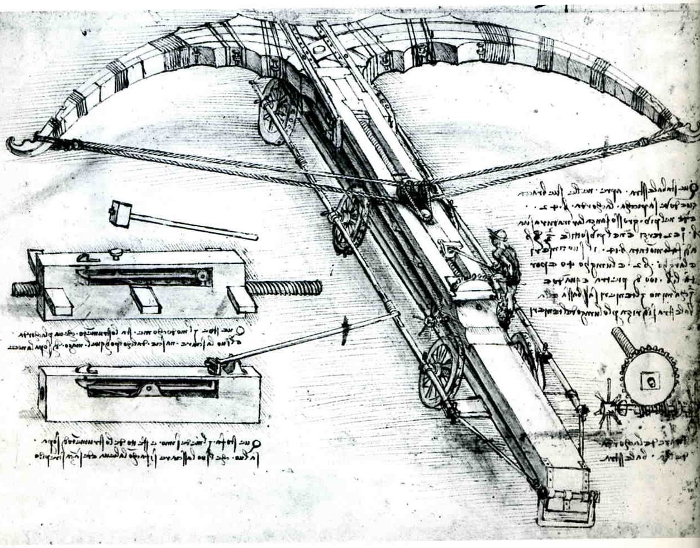 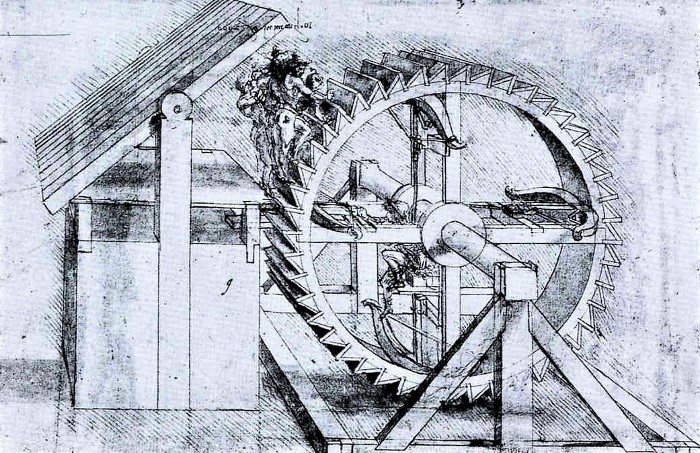 Leonardo designed a huge crossbow,(his ballista), and it was truly huge (86 feet long). The weapon boasted a worm and gear mechanism to draw the bowstring and was mounted on canted wheels providing a stable base on the rough ground.

Two alternate firing mechanisms allowed the bow to release by a hammer blow or by lever action.

He also made drawings for a repeating 'machine gun’ operated by a man-powered treadmill. Treading on the outside of the wheel instead of the inside gave greater leverage to the operator. 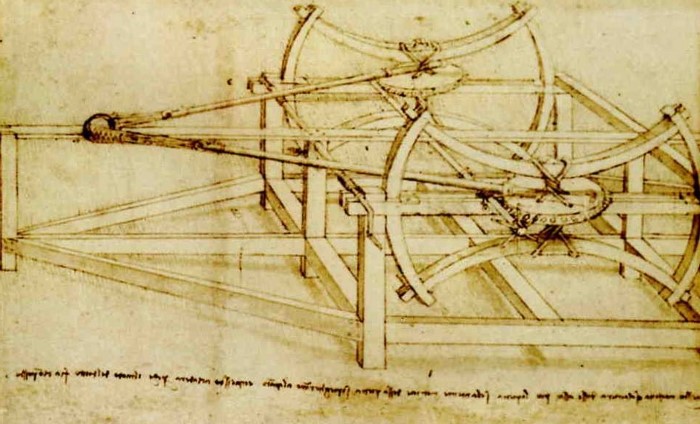 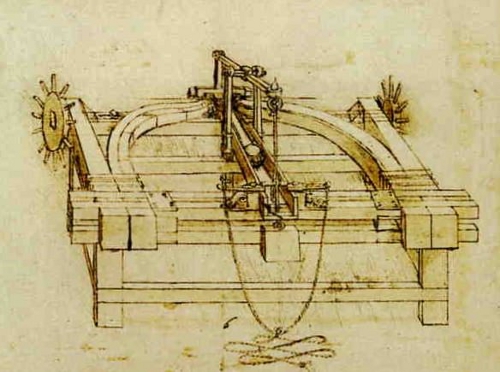 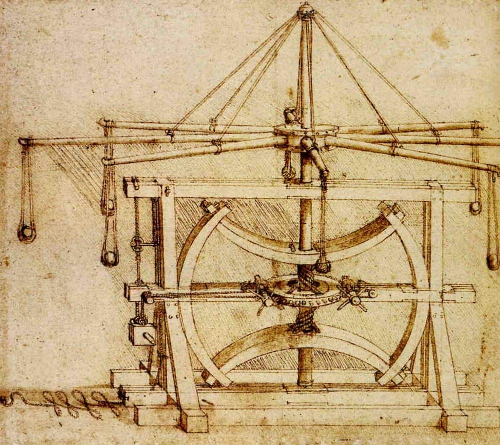 The catapults and repeating large crossbows were intended as cheaper alternatives to more expensive firearms. Leonardo came to realise that these catapult designs were being overtaken by the more efficient guns and cannon.

He then concentrated his efforts on his multi-barrelled cannon and mortars.

Leonardo’s fascination with the mechanics of flight did not only extend to his many studies of birds, their wings and propulsion, he also realised the importance that manned flight could have on warfare.

His many concept studies for flying machines are a testament to his inquiring mind and he produced designs that were years ahead of their time. Imagining bombs and arrows raining down on enemy positions were notions that only became a reality centuries later in the first and second world wars of the twentieth century. 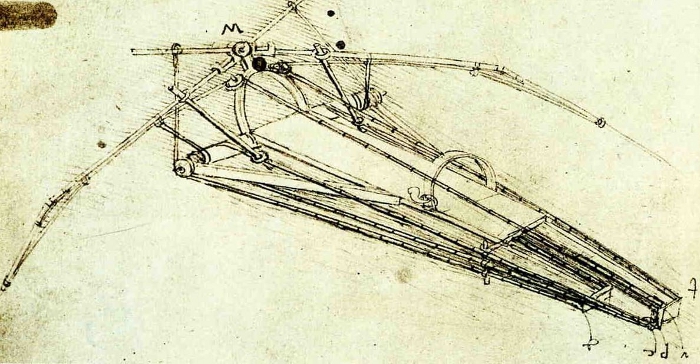 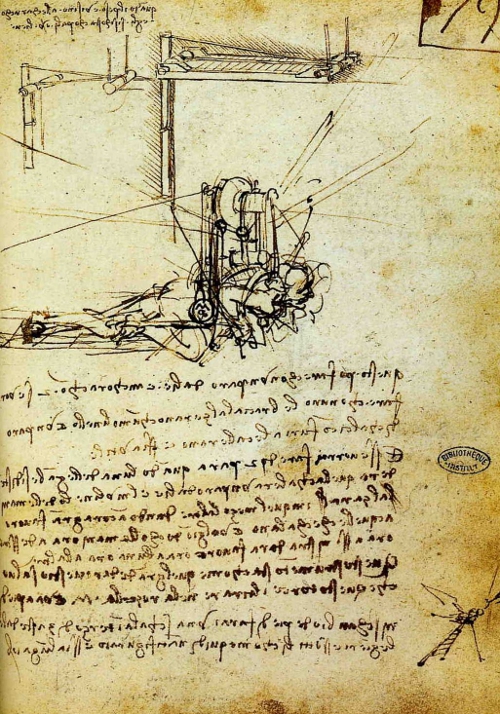 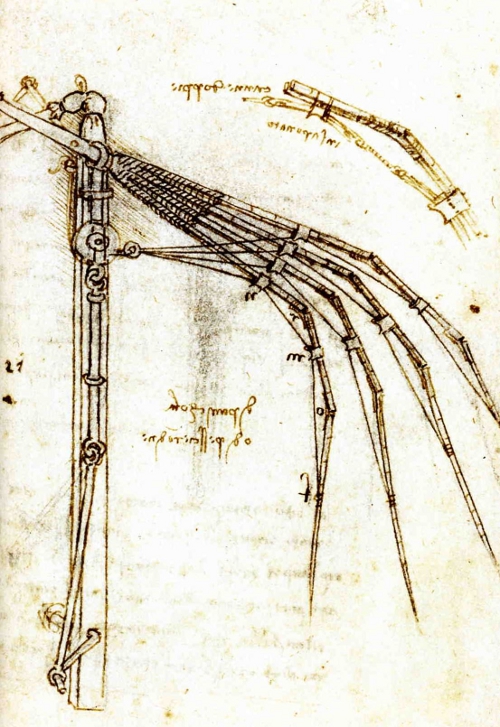 Study for an articulated wing. (s)

Leonardo had also considered the possibility of an enemy using flying machines in battles, and designed weapons that would shoot them down!