We know and admire Michelangelo as a sculptor, painter and architect, a true genius of Renaissance art. Many of the Michelangelo drawings that he completed, some as studies for his larger works such as the frescoes in the Sistine Chapel, and some as gifts for friends, are notable works of art in their own right.

The art historian Vasari stated that Michelangelo destroyed many of his drawings, “so that he would leave nothing that is not perfect.” The many drawings that do survive provide a snapshot of the thought process of a great artist.

Presented here is a personal selection of just a few examples of Michelangelo’s work. 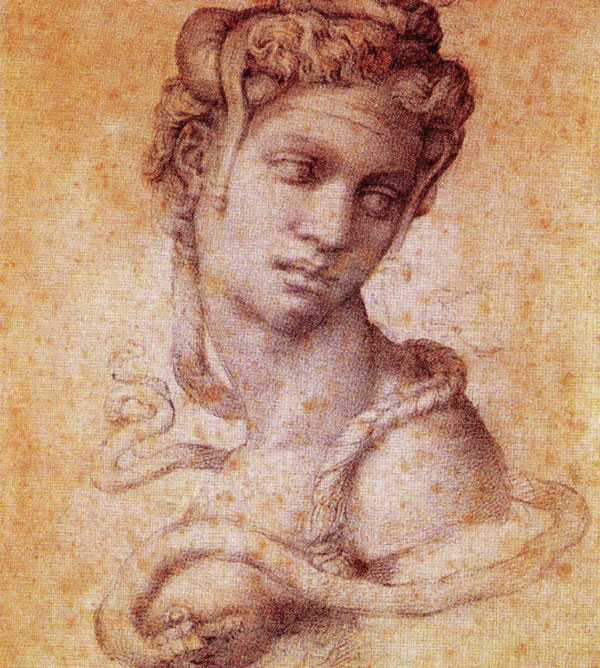 The Egyptian Queen seems unperturbed by the asp coiled around her shoulders and biting her breast. 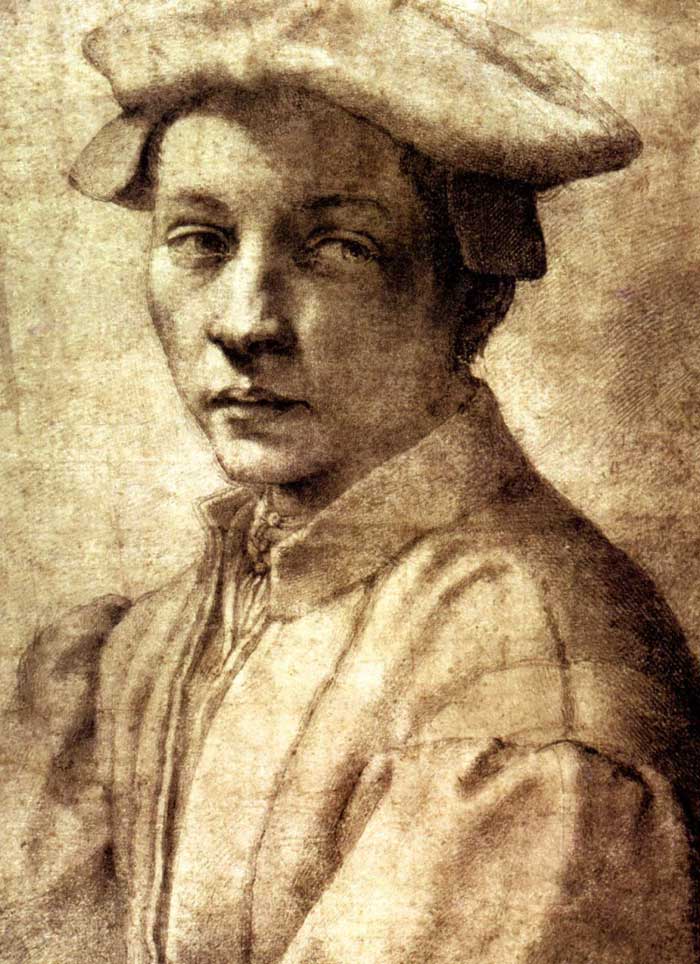 The only surviving portrait drawing by Michelangelo. Quartesi was a youth of noble birth a member of a wealthy Florentine banking family. 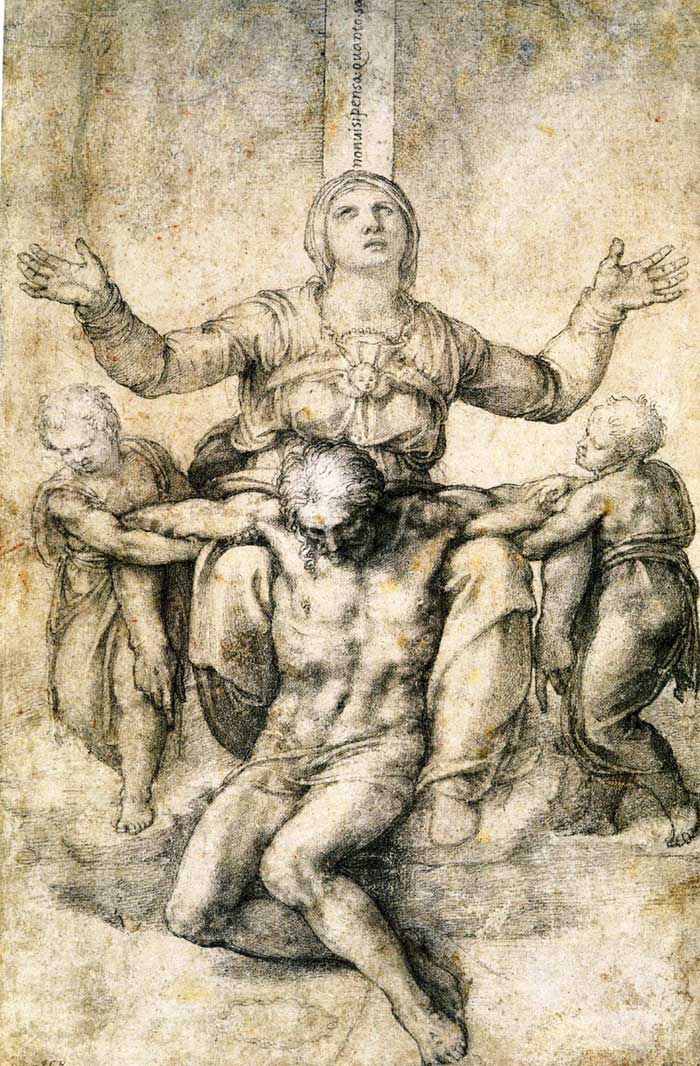 The Madonna, aided by angels, supports her lifeless son in a dramatically expressed and beautifully executed drawing. The work was a gift for Michelangelo’s friend Vittoria Colonna. 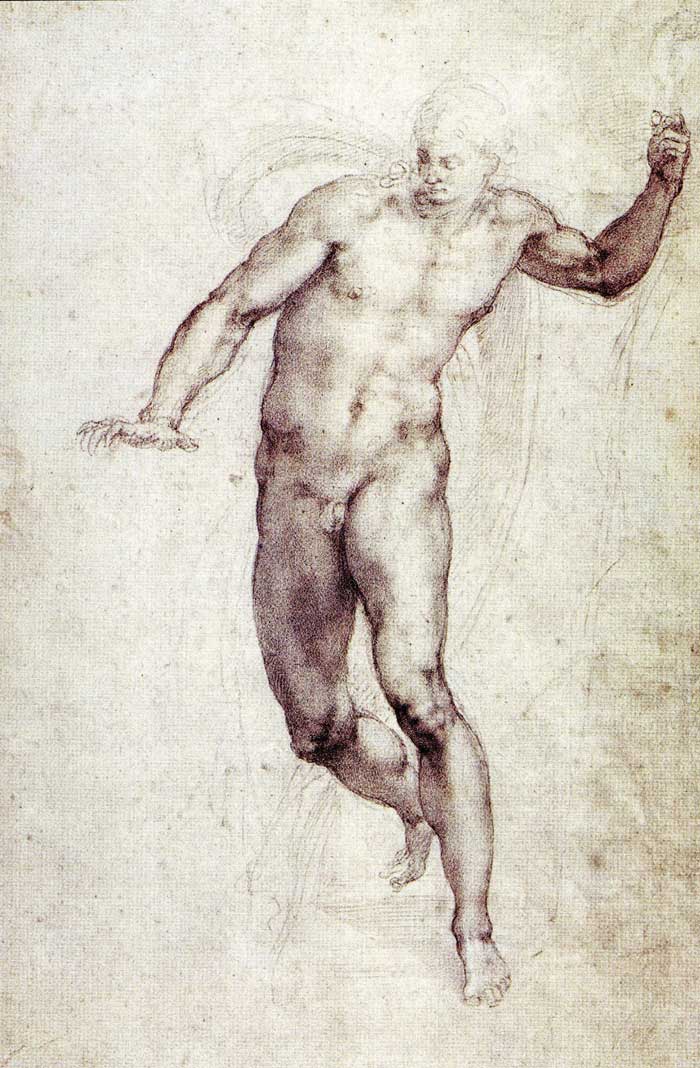 One of many studies of the muscular male body that Michelangelo excelled at. Note the twisting motion of the torso expertly captured by the artist. 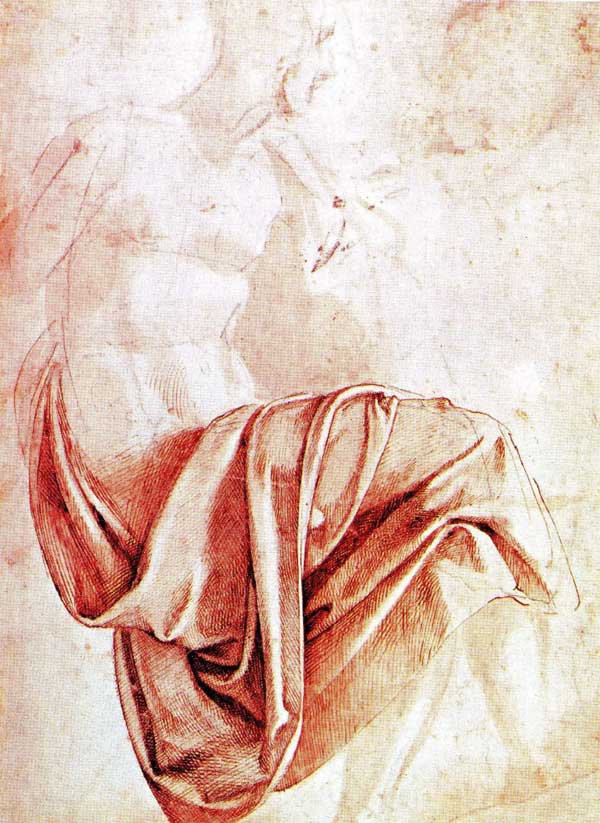 Study for the drapery of the Erythraean Sibyl, 1508-12, brown wash with dark brown ink over a black chalk underdrawing, British Museum, London.

A study for one of the five Sibyls on the Sistine Chapel ceiling. 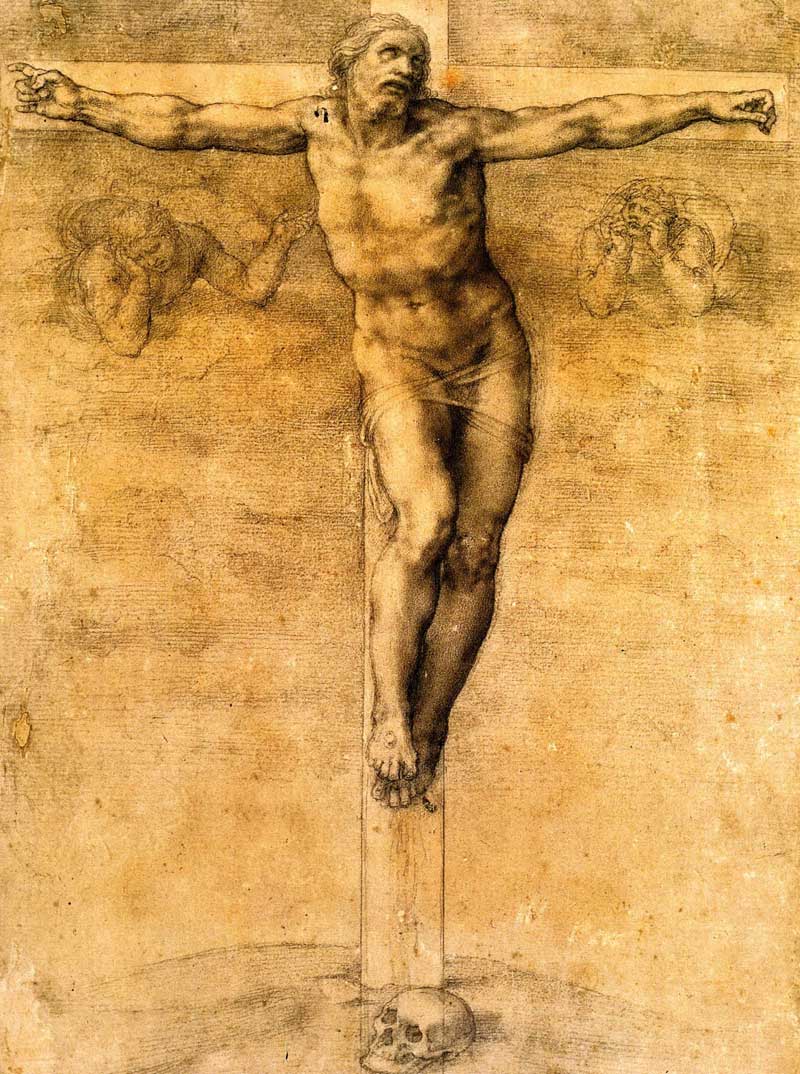 Christ is shown alive and suffering on the cross, this is in contrast to the usual depiction of the dead Christ figure of the times. The drawing was a gift for Vittoria Colonna. 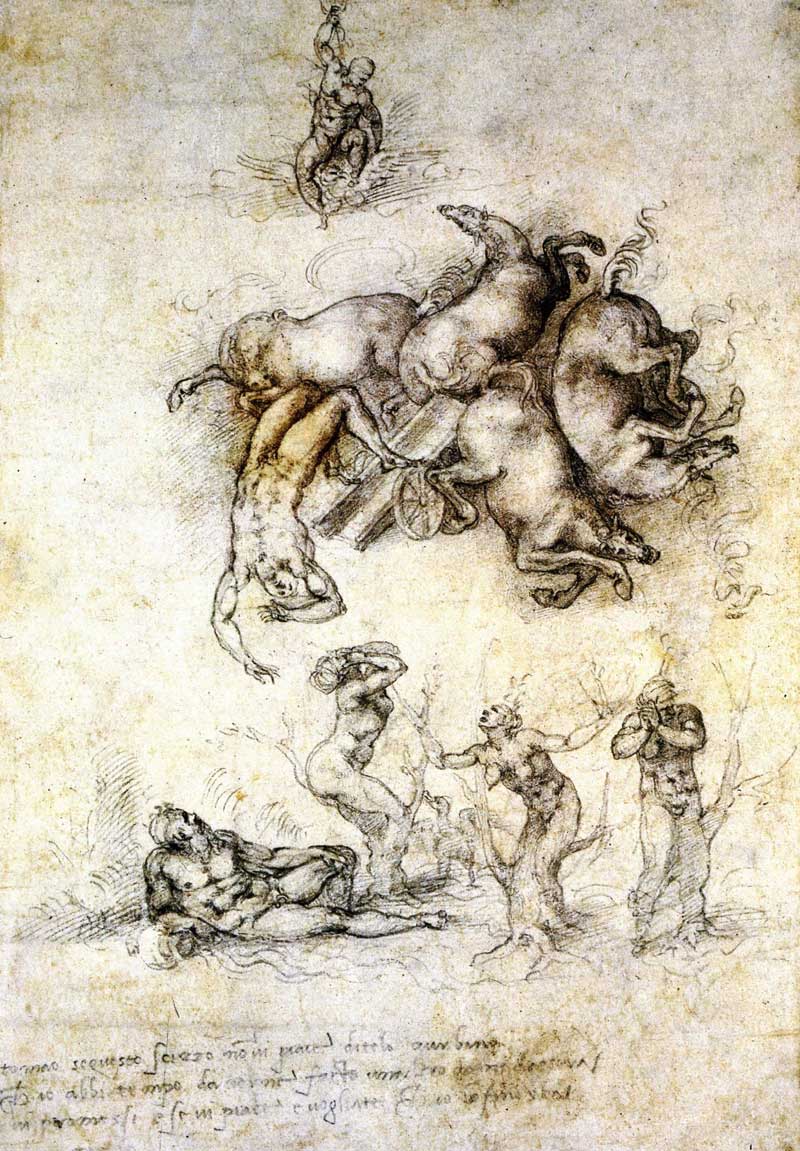 Another gift for Tommaso de’ Cavalieri one of four Michelangelo drawings given to Tommaso by the artist. 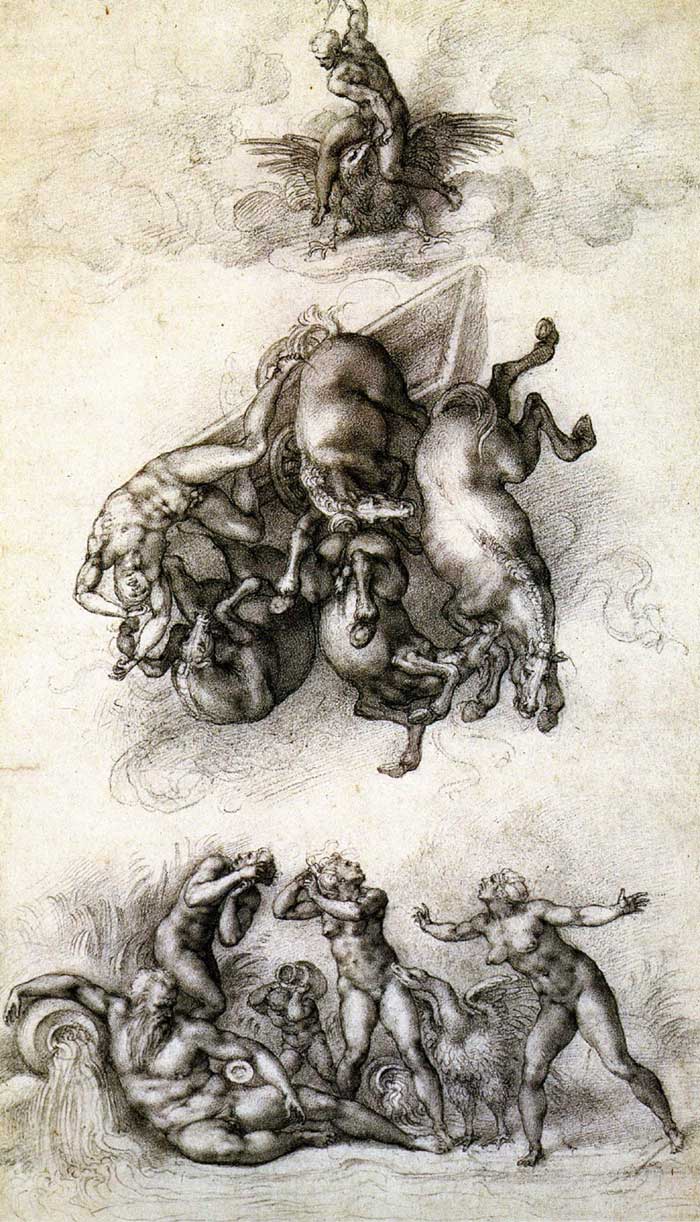 In popular mythology, Phaeton asked his father Appolo for the use of the sun chariot for the day. But he could not control it the chariot rose too high and the earth froze, too low and it was scorched. Jupiter intervened with a thunderbolt knocking Phaeton from the sky. 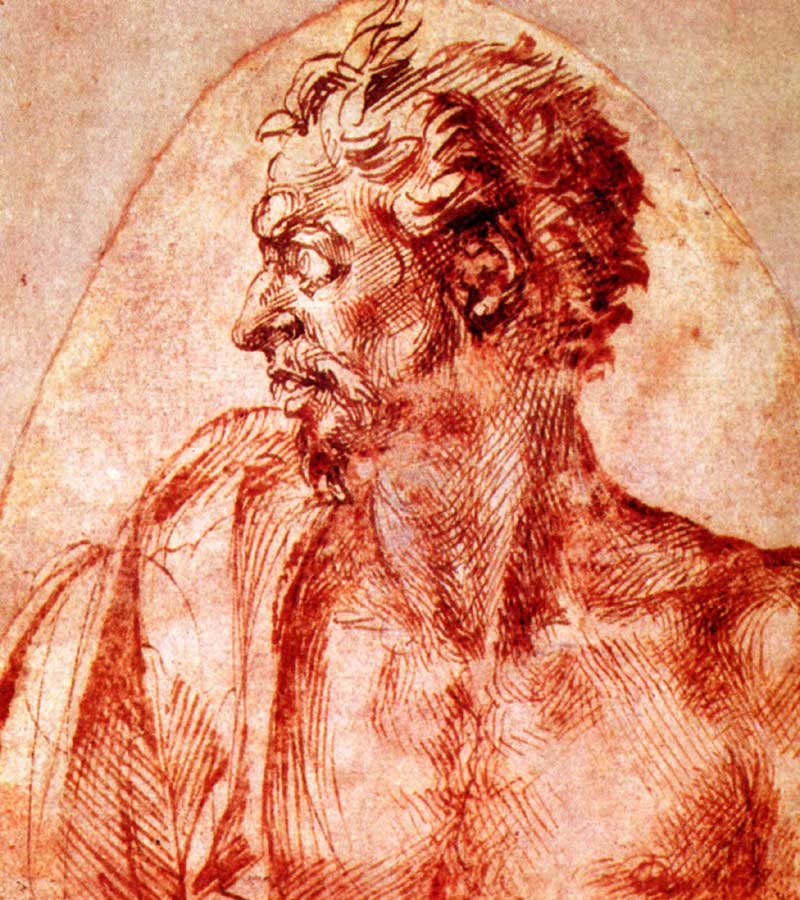 This detailed drawing of a man with a beard resembles a satyr or devil. 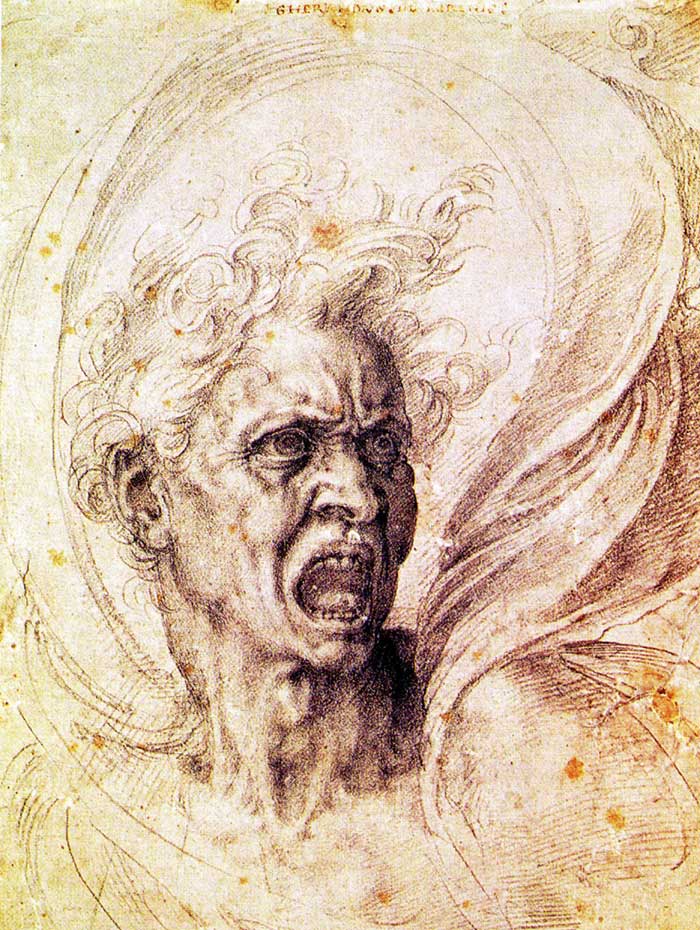 This was a presentation drawing for Gherardo Perini, who was one of the life models in Michelangelo’s studio. 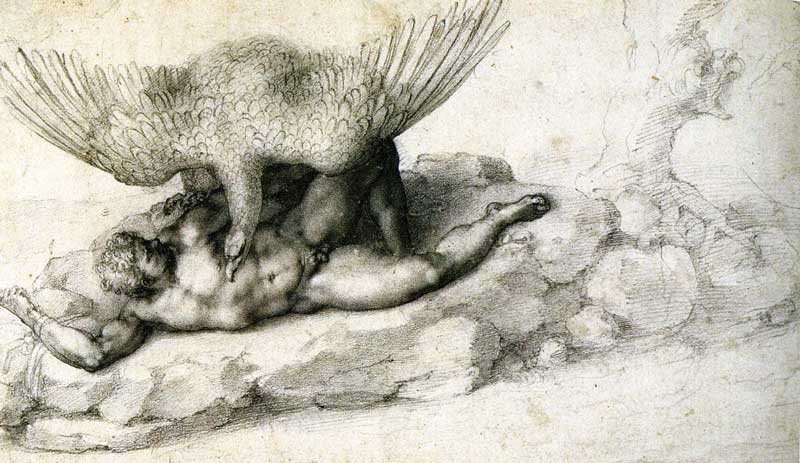 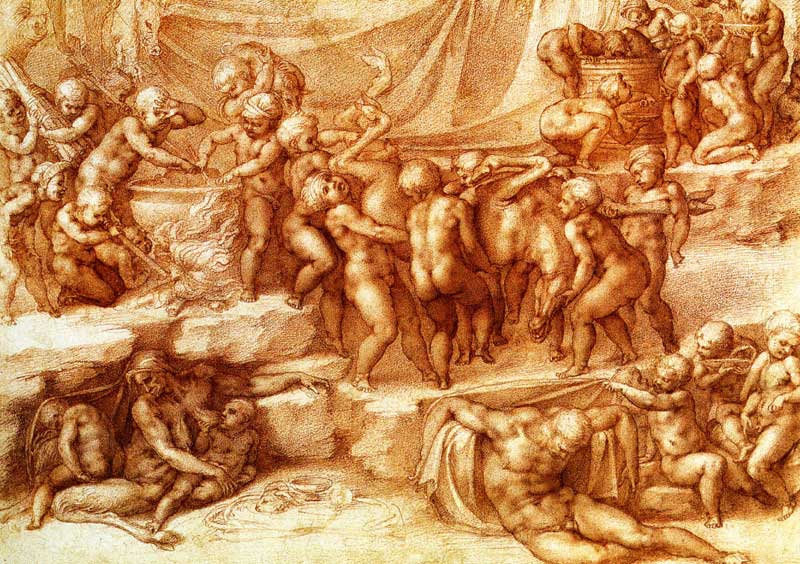 Created as a gift for Tommaso de’ Cavalieri it represents the lowest level of human activity. 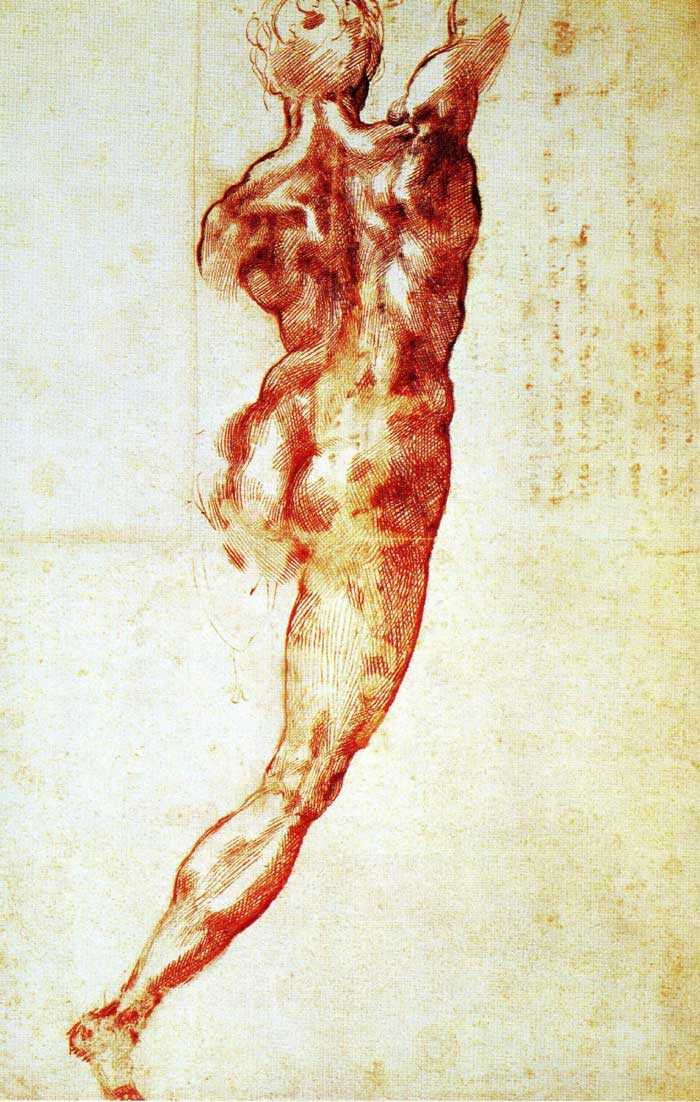 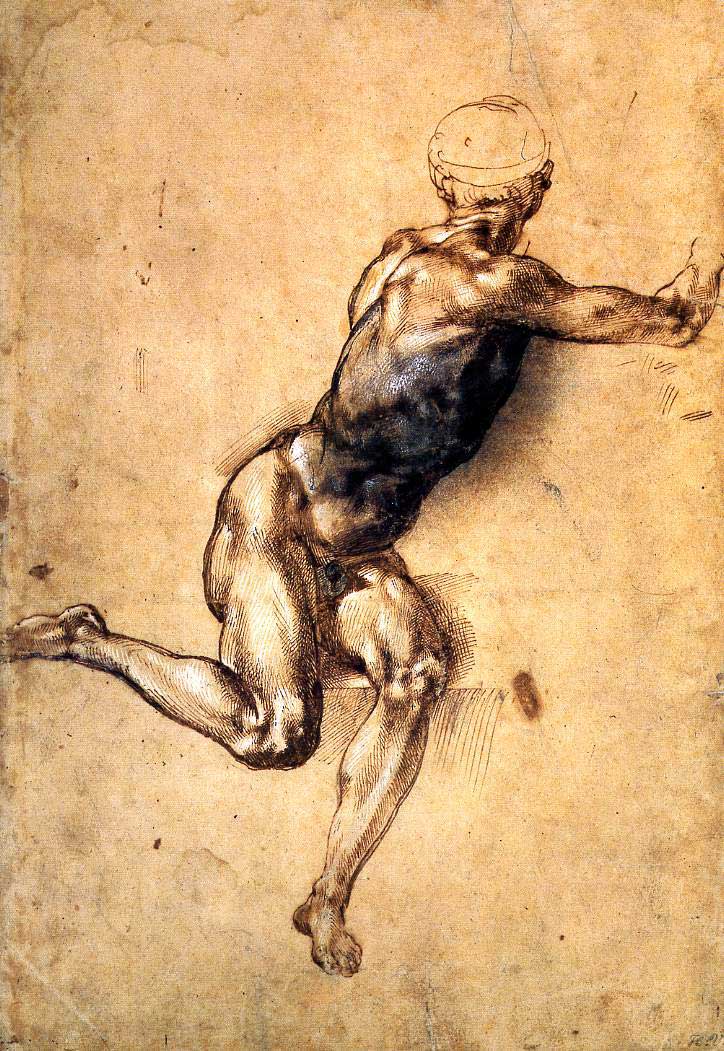 Another preparatory Michelangelo drawing for the Battle of Cascina showing the twisting body of an athletic man. 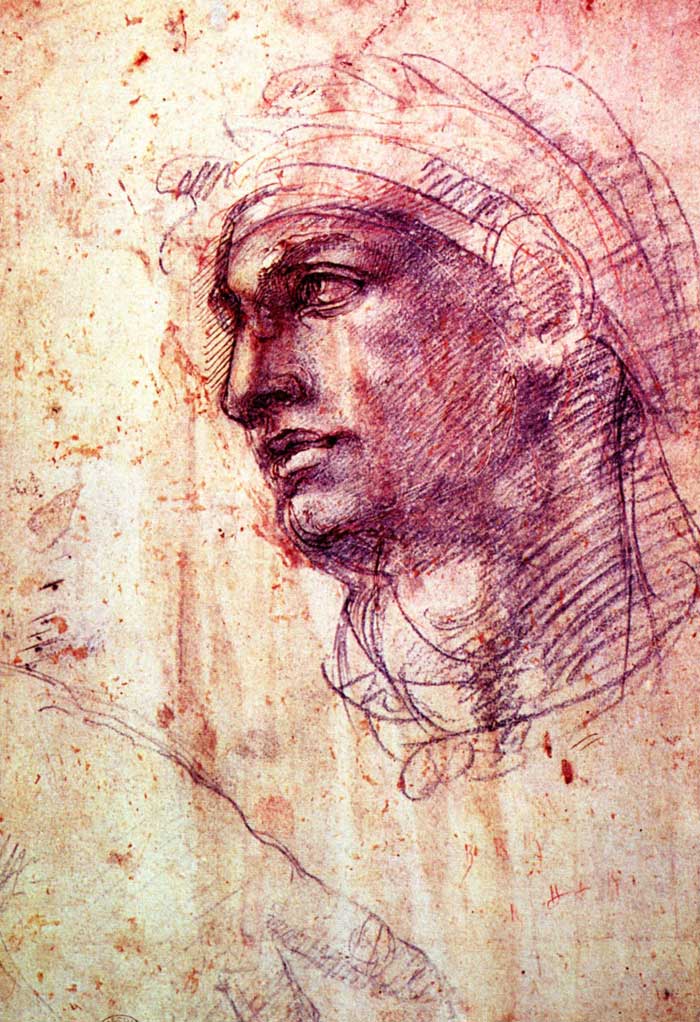 A preparatory drawing for the heads of the ignudi on the Sistine Ceiling. 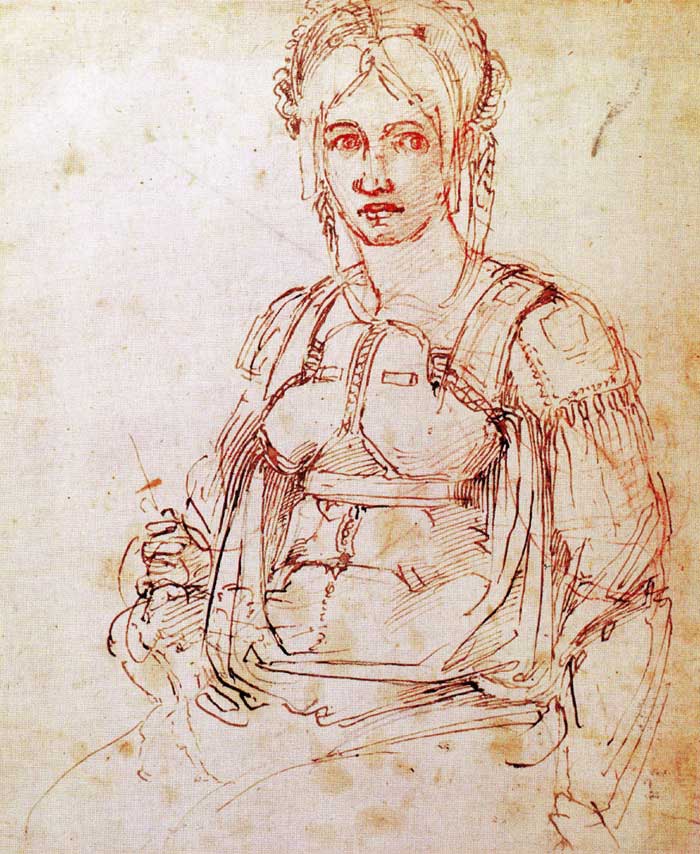 Some parts of this sketch (such as the red chalk under-drawing) are thought to be by Michelangelo’s pupil Antonio Mini. The work was then completed by Michelangelo. 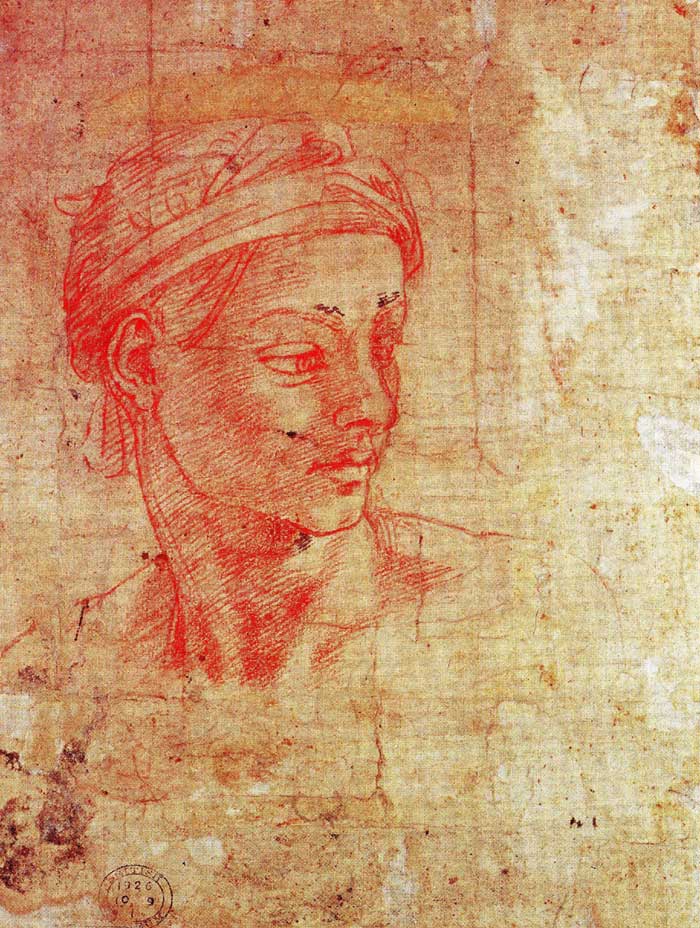 This beautifully drawn study of a head is possibly a preparatory Michelangelo drawing for one of the many ignudi on the Sistine Chapel ceiling. 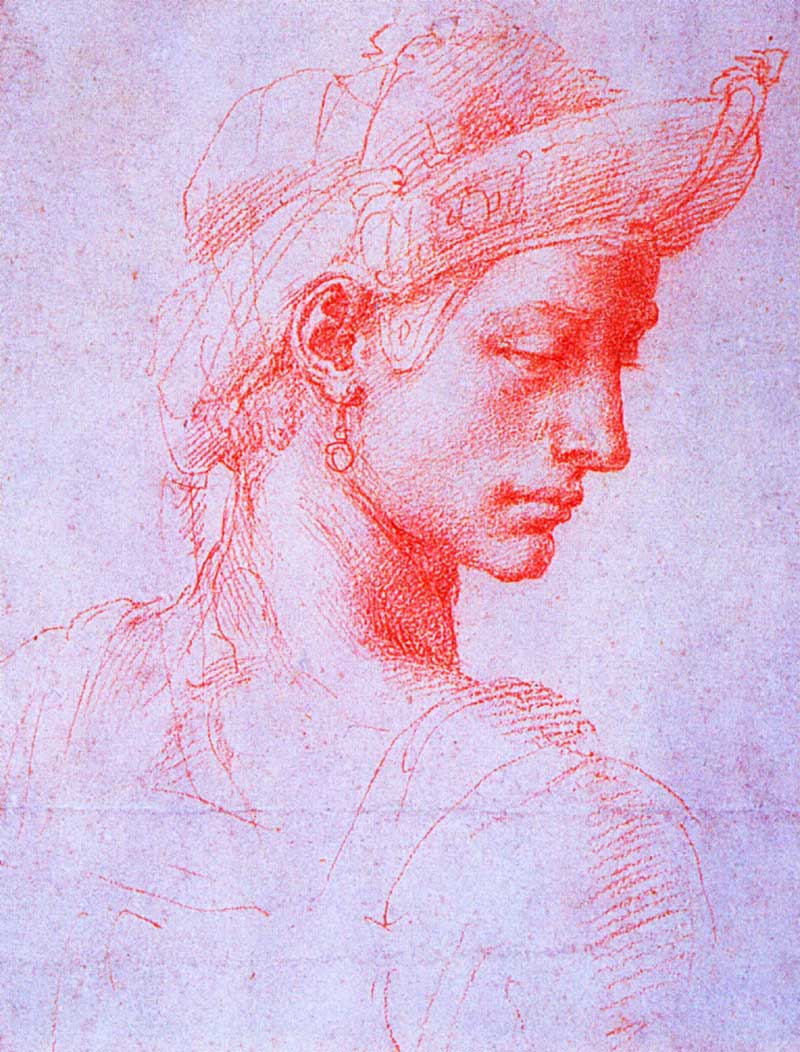 This study is one of my favourite drawings by Michelangelo, the soft shading of the red chalk on the neck and face is wonderful.