The Sacrifice at Lystra.
Raphael Cartoon and Tapestry.

The citizens of Lystra (Hatunsaray in Turkey) decided to offer a sacrifice to Paul and Barnabas who had cured a lame man. After witnessing the miracle the Lystrians assumed that the two preachers were the gods Jupiter and Mercury.

This did not please Paul and Barnabas who attempted to persuade the gathering crowd that they are messengers of the one true God.

Raphael's composition centres on the executioner, axe raised ready to dispatch the sacrificial ox. A man in red robes seems to hear the pleads of the two Apostles and reaches out in an attempt to halt the sacrifice.

On his right, and clothed in blue robes, is the cured man who clasps his hands in prayer as he walks past his discarded crutches. A bearded onlooker, bemused by the miracle, stoops to inspect the restored leg.

The two Saints are shown on the left of the cartoon and are separated from the crowd by columns. The small altar leads the eye beyond the central figures into the background with its statues and landscape.

All of the leading characters have been painted by Raphael with his assistants completing the minor figures and landscape. 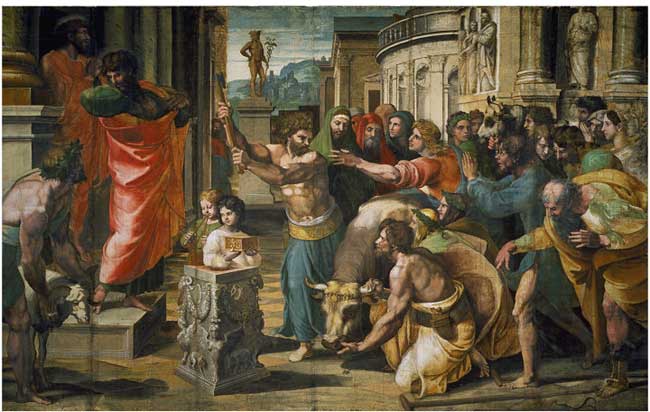 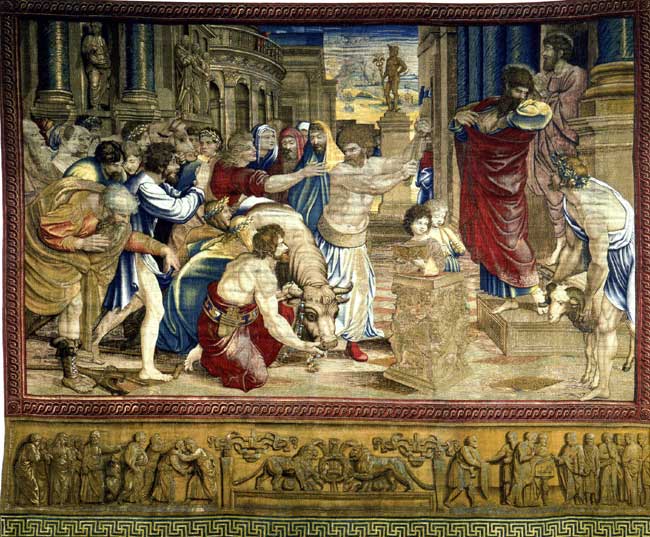 This is one of the seven tapestries that was displayed in the Sistine Chapel on December 26th 1519.