Leonardo’s renowned mural The Last Supper was painted on the North wall of the refectory in The Dominican convent of Santa Maria delle Grazie, it is the most ambitious work that da Vinci executed during his first period in Milan.

The mural was probably commissioned by Leonardo’s patron Ludovico il Moro Sforza who had provided the newly refurbished refectory for the monks. The subject of Christ’s last meal with his disciples was a popular one for the religious institutions of the time.

The dining room was seen as a fitting location for the painting, a place in which the monks could reflect on Christ’s final gathering before his arrest and crucifixion. In addition to the mural, Leonardo was also commissioned to decorate the lunettes above the painting with the Ducal, Sforza and Este coat of arms.

Leonardo decided on an unconventional mixed-media technique for the mural. Instead of the conventional fresco method of applying paint onto wet plaster, he painted on the drywall with a combination of egg tempera and oil paint onto a ground of chalk bound with glue.

Unfortunately, this method proved to be unstable and the paint began to flake soon after the mural was completed. Several rather unsuccessful attempts at restoration have been attempted, these have now been removed in an effort to retain the remaining parts of Leonardo’s original work.

The painting of Christ and his apostles covers one wall of the refectory and appears to extend the size of the hall. The lifelike depiction of the figures is equalled by the attention to detail given to the dishes and to the folds of the draperies.

Leonardo has presented the biblical story in a way that had never been seen before. Earlier versions of the same subject had shown Christ calmly dispensing the Sacrament with the apostles sitting quietly in a row, only Judas was segregated from the rest.

In contrast, Leonardo has given us a scene of drama, movement and excitement. Gathered from da Vinci’s extensive catalogue of preparatory drawings, each of the figures have individual expressions. 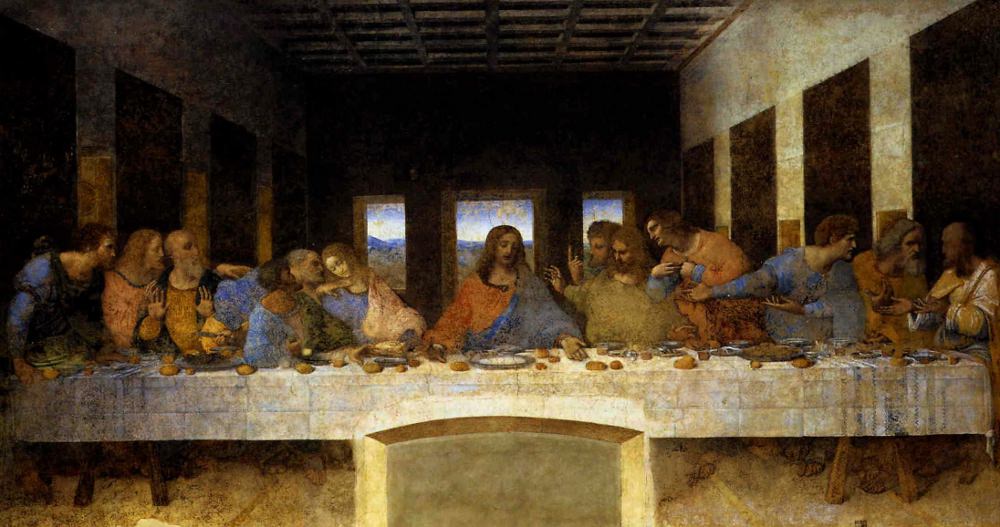 Christ has just declared that one of the apostles will betray him, and the disciples recoil and gesticulate in disbelief at this shocking revelation. At the left of the painting, Bartholomew is stands stooped over the table, James the Less and Andrew raise their hands while Peter rises angrily from his chair.

Judas grasps the pouch containing the money he has been paid for his betrayal, only John who sits serenely expresses a modicum of calmness. The apostles at the right of the table Thomas, James the Elder, Philip, Mathew, Thaddeus and Simon-all express varying degrees of shock and anger at the announcement.

Grouping the apostles in groups of three-seen as a divine number-da Vinci has created a harmonious composition mirrored by the three windows in the back wall and the three doors placed between the wall tapestries. The central, triangular figure of Christ appears isolated within the group, he also serves as the vanishing point within the painting.

This picture has deteriorated over the years and is now in a poor state of preservation. Leonardo's experiments with different painting mediums on The Last Supper have backfired and, perhaps with hindsight, he should have used the tried and tested fresco techniques of the period.

The painting covers one wall in a hall in the monastery of Santa Maria delle Grazie in Milan. At the time of its unveiling we can only imagine the impact it must have had on the monks, they certainly would not have seen anything so lifelike. To the monks, they must have felt that they were almost taking part in the Last Supper with Christ and his disciples.

Studies for the Apostles in the Last Supper. 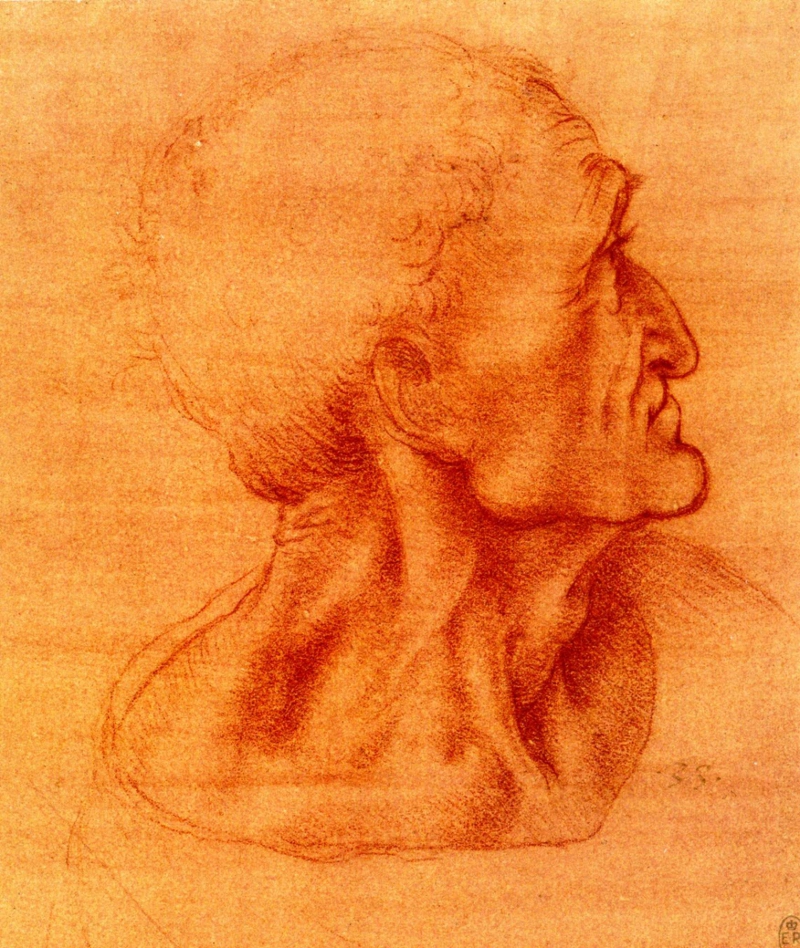 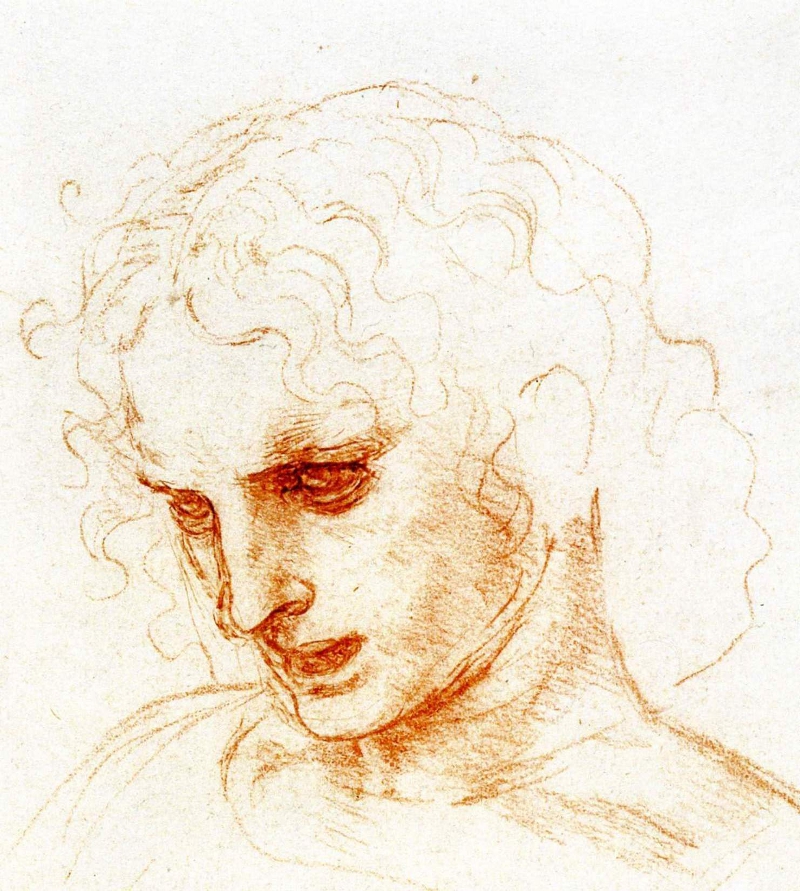 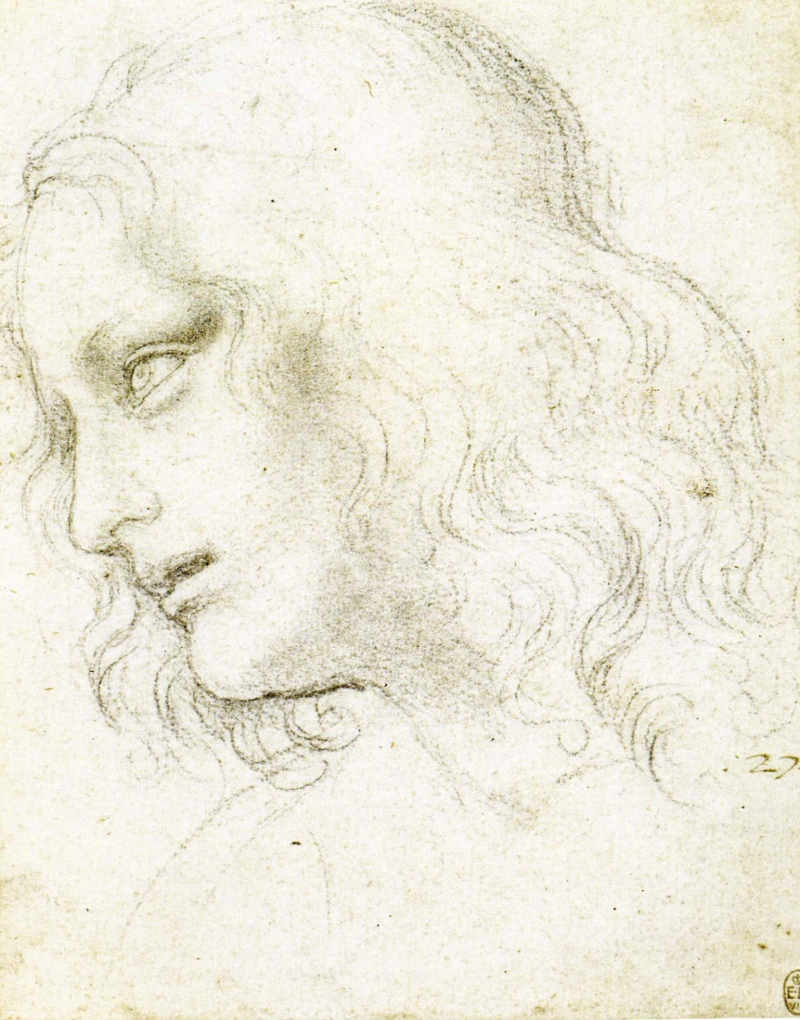 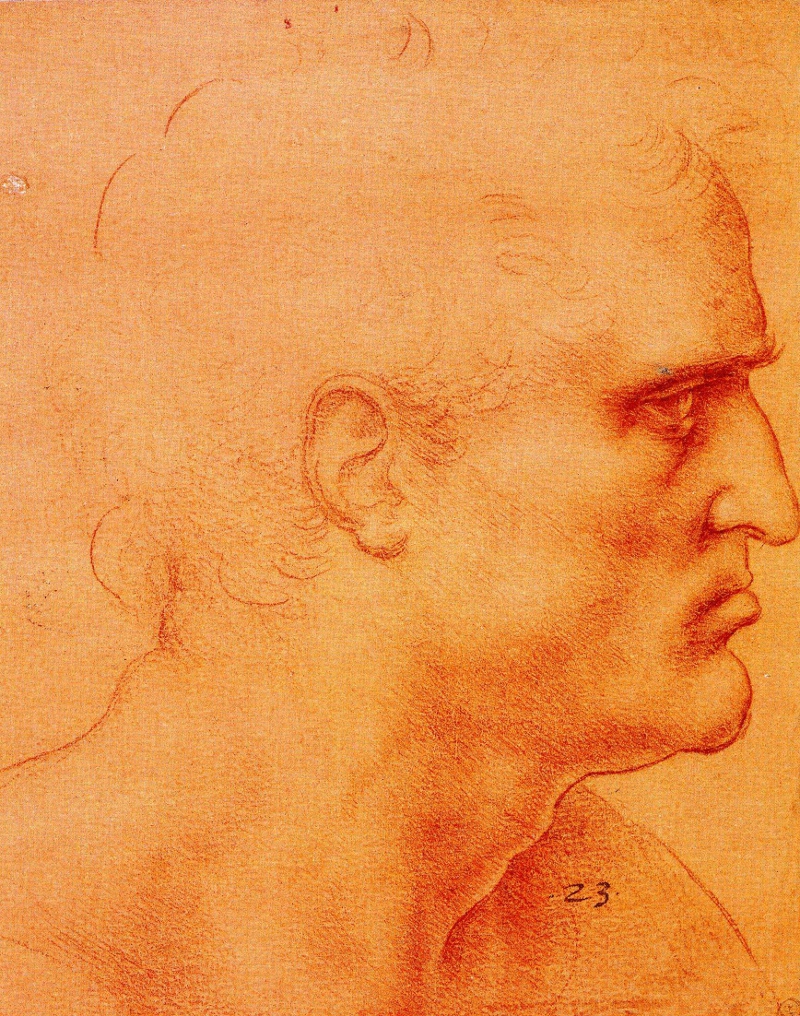 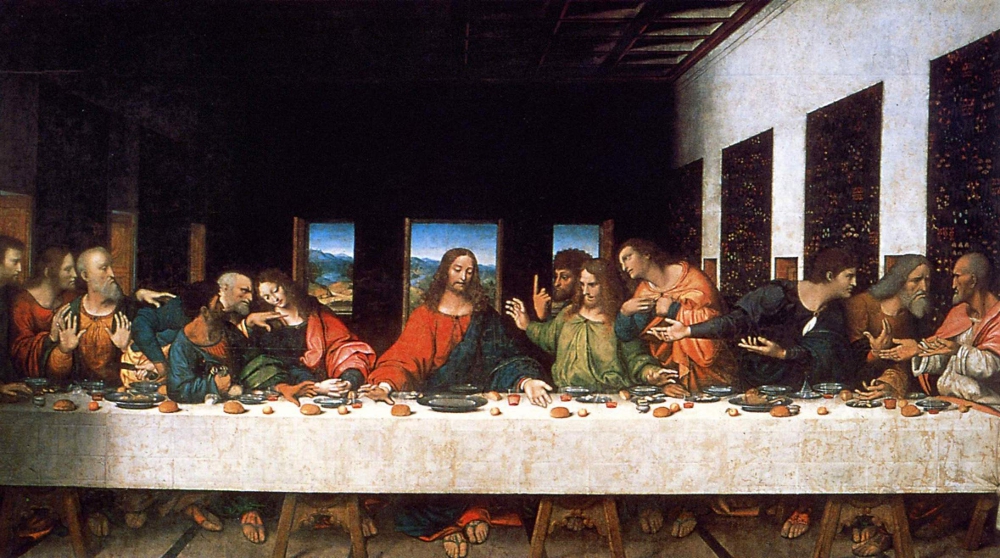 This copy by an unknown 16th-century artist displays some of the detail which is no longer visible in Leonardo's damaged wall painting. In particular, the feet of the apostles can be clearly seen (in the original the damage is so extensive that these details have been almost completely lost.)

In 1652 a door was cut into the refectory wall obliterating forever Leonardo's original painting of the feet of Christ beneath the table. This missing part of the mural can only be seen in early copies of the work. 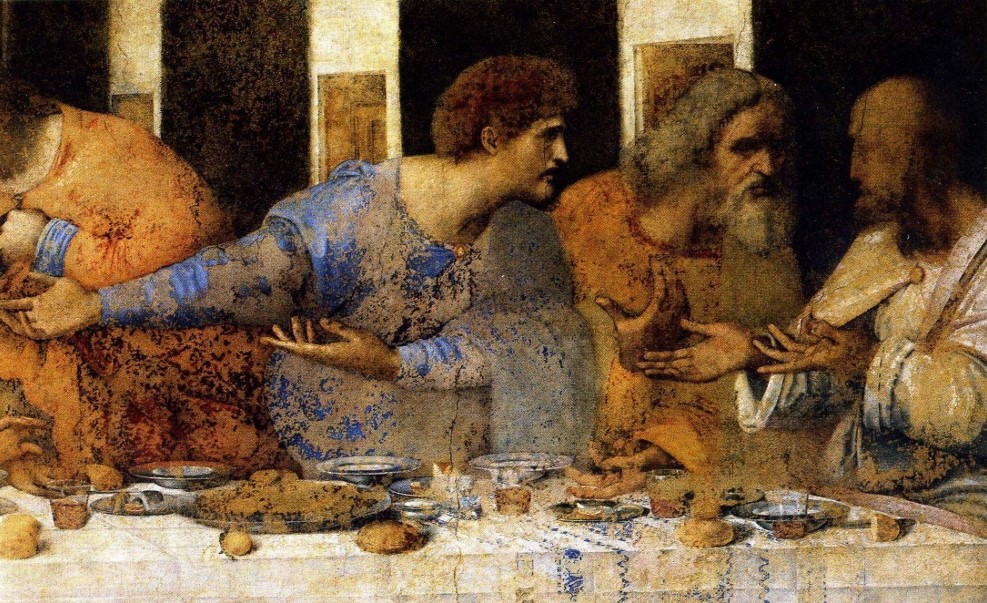 Detail (s) The poor state of preservation is apparent in this detail. 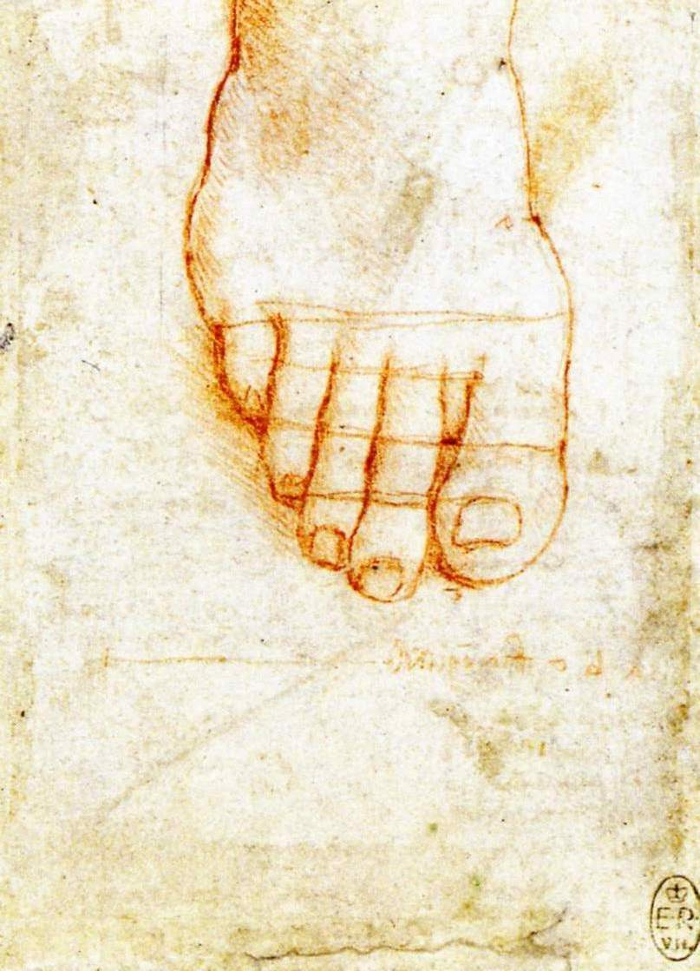 The painting has been subjected to various restoration attempts and all over painting has now been removed in an attempt to show only Leonardo's original work. 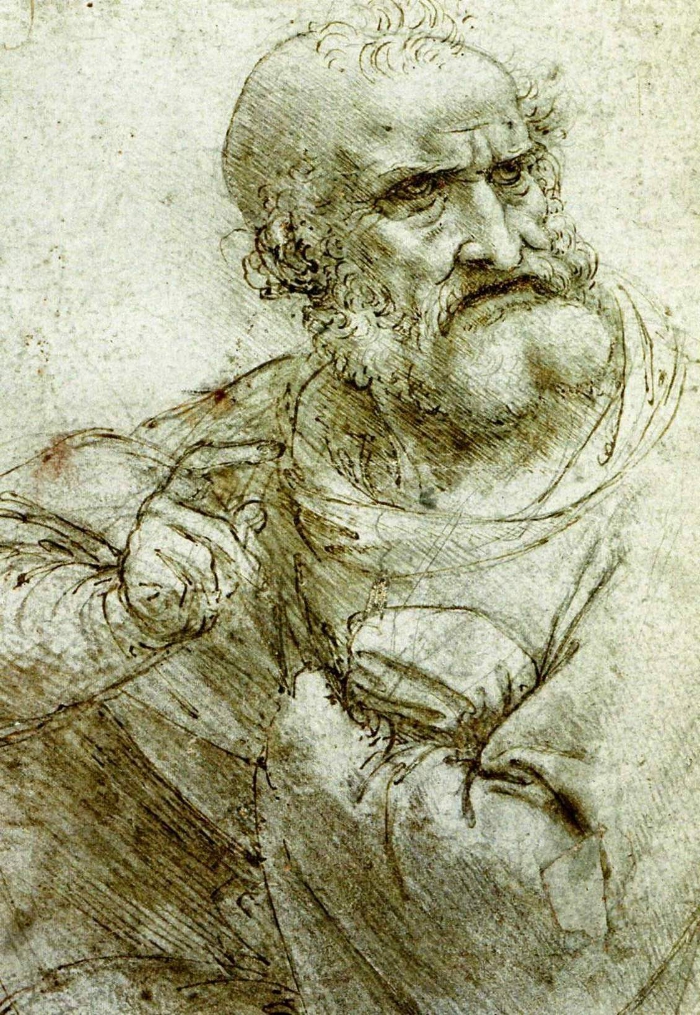