The story of Leda and the Swan stems from Greek mythology, Leda was the wife of King Tyndareus of Sparta. Zeus the leader of the Greek gods transformed himself into a swan and seduced Leda who bore him four children. The children Castor, Pollux, Clytemnestra, and Helen emerged from four eggs, another reference to the birth cycle of the swan.

The subject of Leda and the Swan has been explored by many artists throughout history. Correggio, Michelangelo, and Paul Cezanne are among the artists who have produced versions of the story.

Leonardo’s original painting has been lost, it was reportedly seen in Fontainebleau in 1625 and was described as being in a poor state having been done on three long panels which had split and broken off. Some experts doubt that Leonardo ever completed the painting we only know the work through countless copies by Leonardo’s followers and from the master’s preparatory drawings.

Leda and the Swan paintings. 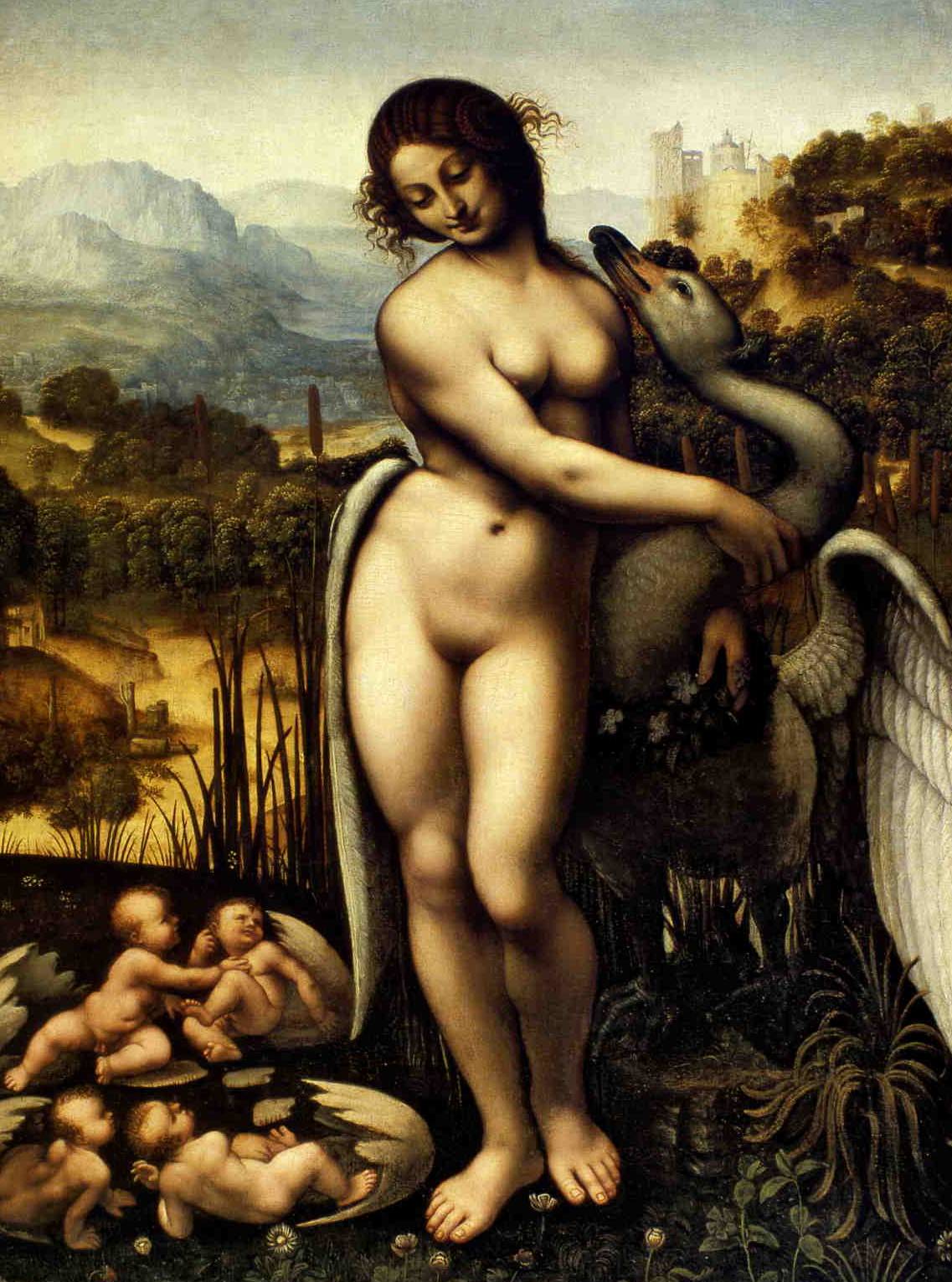 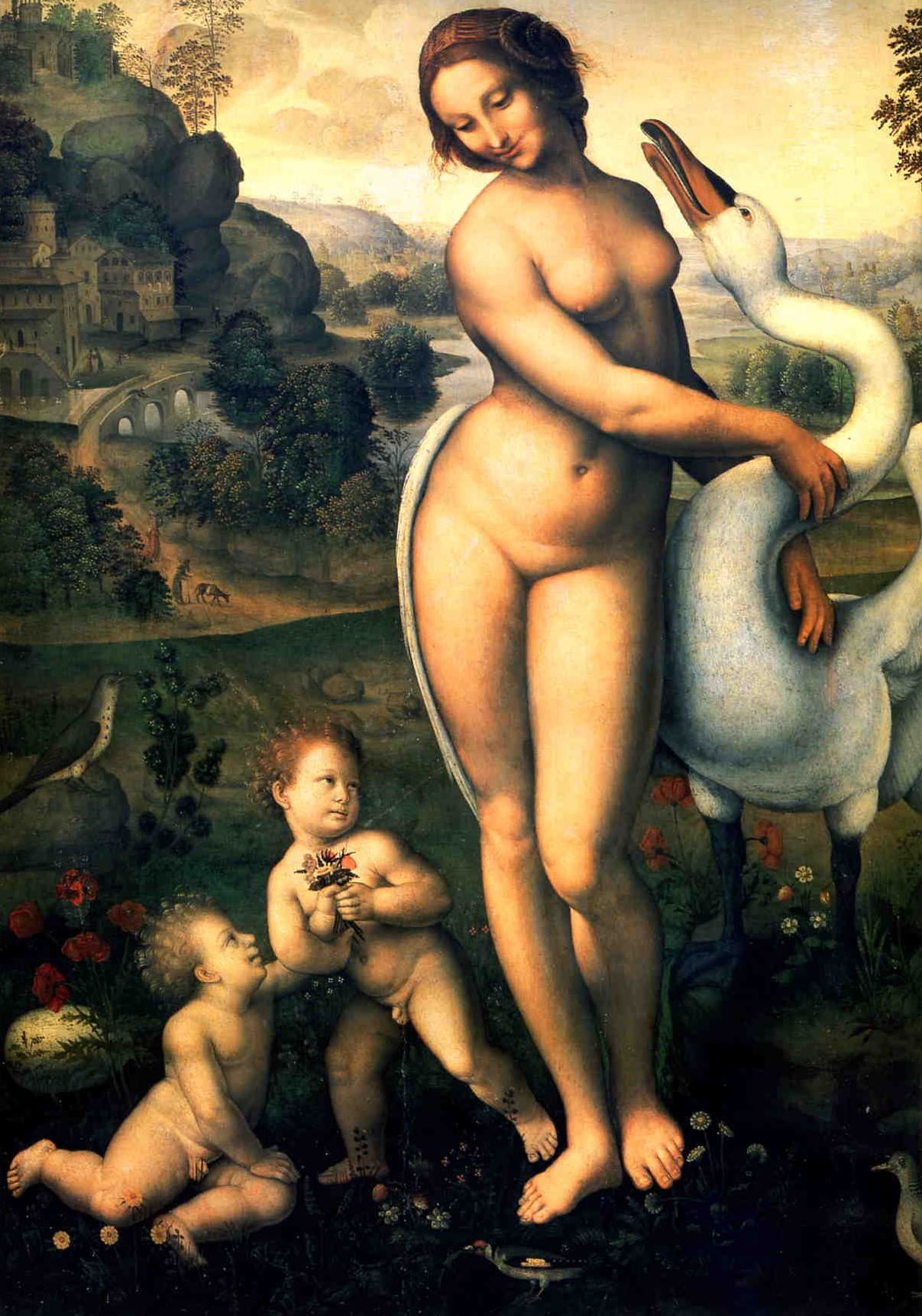 The Wilton house version is possibly the closest to Leonardo’s lost painting the head of Leda is very close to a sketch of Leonardo’s especially in the complex hairstyle including the wayward strands of hair. Also, the star of Bethlehem plant at the bottom right is again a close match to a Leonardo sketch of the same plant. The rocky background is also reminiscent of many similar style backgrounds that feature in Leonardo’s paintings.

The Rome painting by a follower of Leonardo contains only two of the four children that feature in other versions. The children, who hold flowers meet the gaze of their mother as they are accompanied by curious birds in a landscape that recedes over a bridge to a building overlooked by a rocky backdrop. 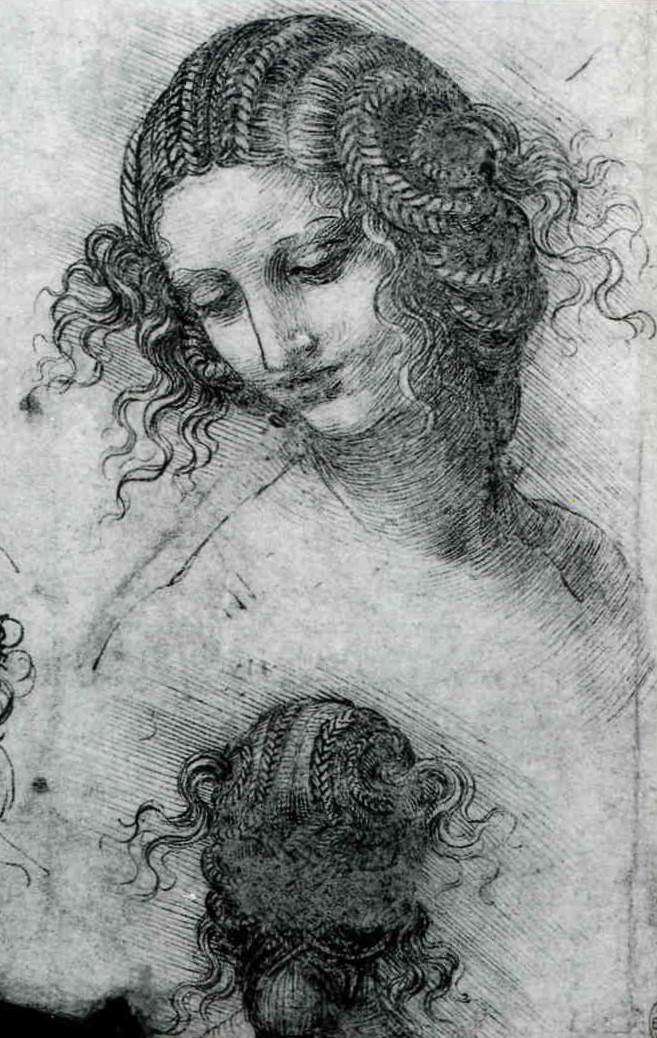 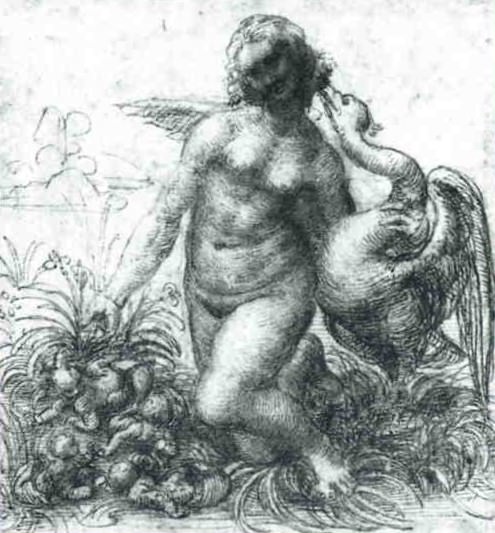 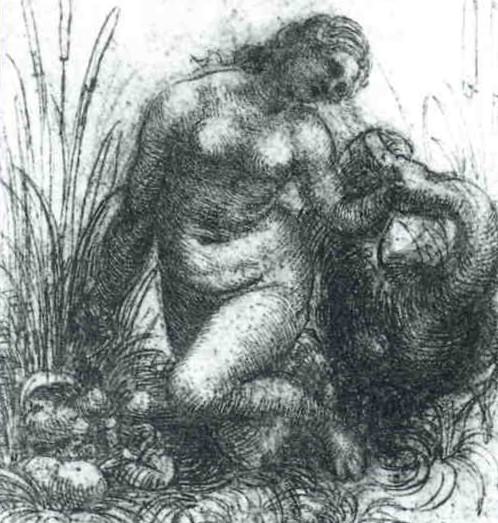 Study for a kneeling Leda and the Swan, Leonardo da Vinci. (s)

Leonardo’s sketches were made as early as 1504 and show Leda in a kneeling position with one arm around the swan. He also made two cartoons one showing Leda crouching and the other standing. Sadly the cartoons like the painting are unfortunately lost. From the early sketches it can be seen how advanced the composition for a kneeling Leda had become, Leonardo only settled on a standing figure in around 1508.

All of Leonardo’s works were much admired by his contemporaries, Raphael made a copy of the standing Leda from Leonardo’s cartoon and the painting has been copied several times. 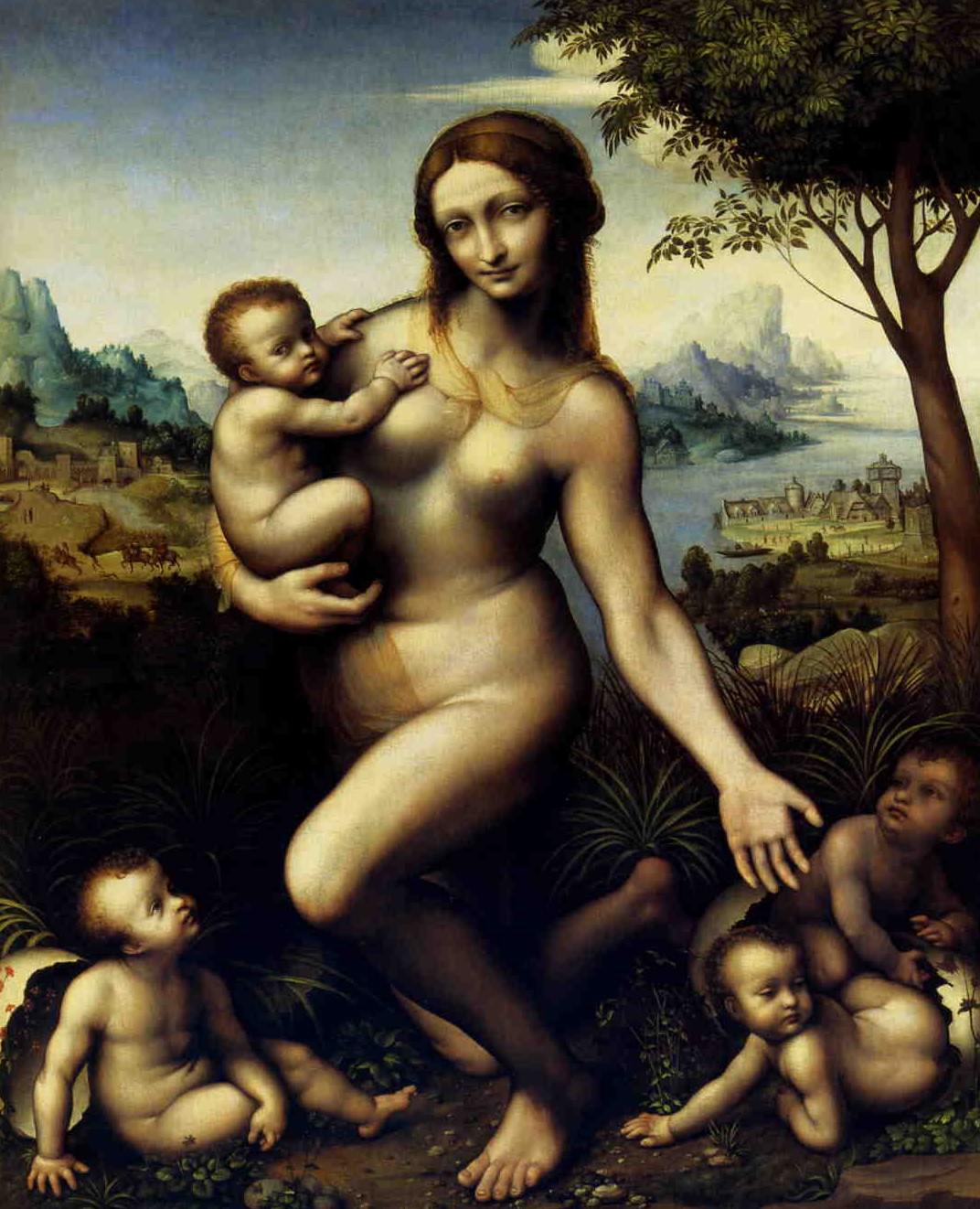 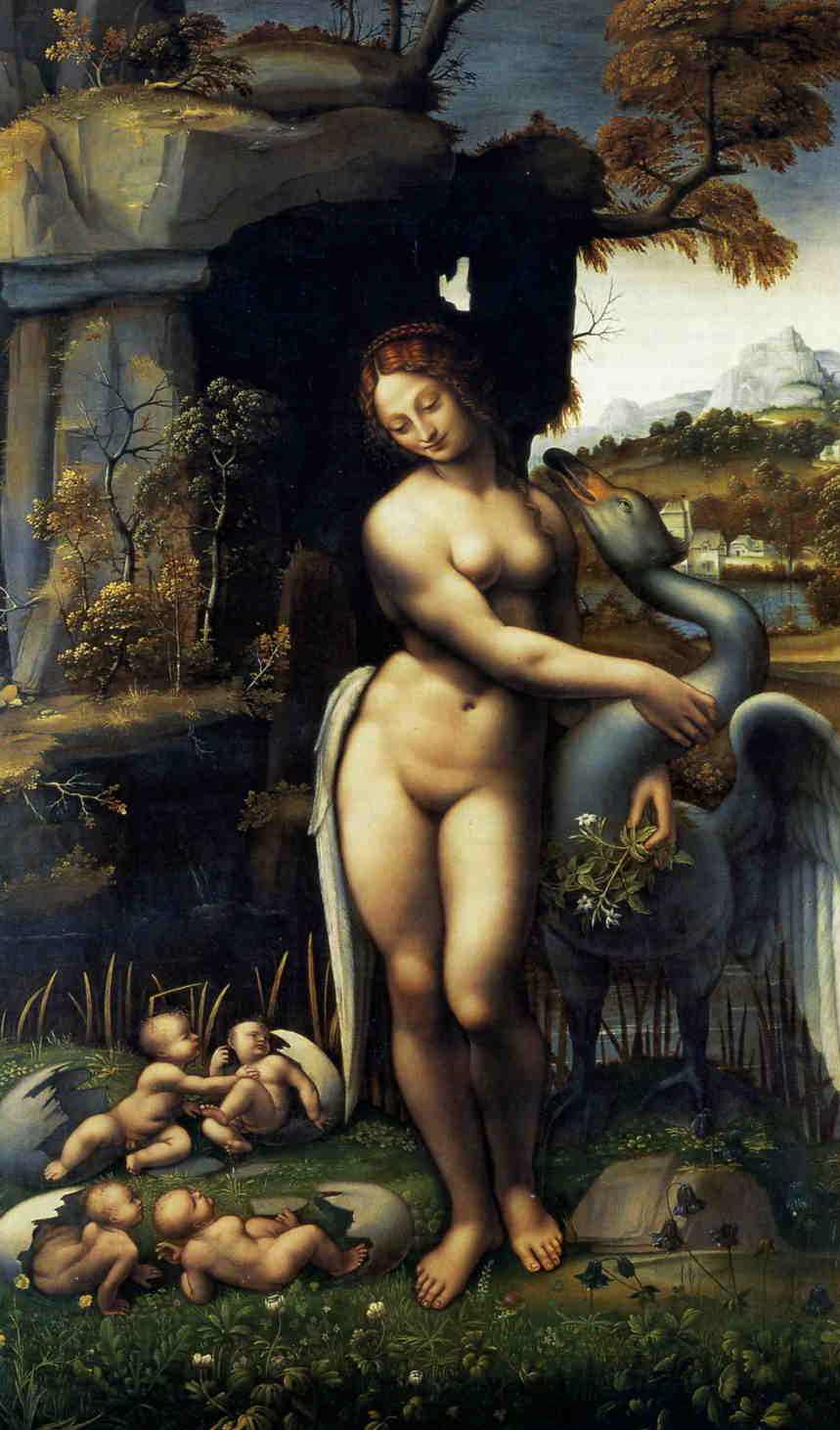 Leda and her Children by the Italian artist Giampietrino are different from other copies. The swan is excluded completely from the composition and Leda is kneeling in a position similar to Leonardo’s sketches. Leda holds one of her children in her arms while the three infants at her feet have recently emerged from their shells.

In Giovanni Francesco Melzi’s version of Leda and the Swan Leda is framed by a rocky formation with the suggestion of a dark cave-like structure that contrasts with her head and upper body. Her four children have broken free from their eggshells as they look towards their mother. Leda holds a sprig of flowers as she embraces the swan.

However, Leonardo’s vision does not display the act of lust which is a feature of some versions of the story instead he has chosen to emphasise the loving nature between Leda, her children, and her lover. Even so, Leonardo has retained a clear sense of eroticism within his wonderful composition, a balance between love and lust.